Get Discounts On The Sound Inside Broadway Tickets!

Things to do in New York Broadway Broadway Show Tickets Get Discounts On The Sound Inside Broadway Tickets!

It’s a game of waiting in the latest American play to hit Broadway this fall season! The Sound Inside unravels the story of Bella Baird, a cancer-diagnosed Ivy League Professor who is working on finishing her last book. She seeks a favour from her student, Christopher, who is mysterious in his own way. Will he or won’t he help her with the task? Watch the breathtaking play which will consume you with dread and anticipation and leave you with more thoughts buzzing inside! With direction by David Cromer, who returns triumphant after his last Broadway venture ‘The Band’s Visit’, the play witnesses the return of Tony Award winner Mary Louise Parker. Don’t miss out on this critically acclaimed play!

The Sound Inside : Broadway Play

The Sound Inside made waves in 2018 for the handling of controversial subjects that could have been depressing yet was redeemed by the writing of Adam Rapp, who transformed it into thought-provoking and impressive theatre. Adam Rapp is known for his narrative-led writing and is famous for his plays Red Light Winter, Nocturne, Essential Self-Defense, and The Edge of Our Bodies. His writing is effectively brought onto stage by the direction of David Cromer whose previous stage outing The Band’s Visit won him a Tony Award for Best Direction. Supporting Cromer’s vision of Bella is the astounding Tony-award winning actress Mary-Louise Parker. She has previously been seen in shows like Prelude to a Kiss, Proof, and Heisenberg. Parker breathes Bella’s persona and is at her best in exchanges with Will Hochman who plays Christopher Dunn.

The mood of the play is set thanks to the efforts of Alexander Woodward (Scenic Design) which is unobtrusive but works just well enough to hint at the place and time of the play. The lighting by Heather Gilbert and sound and music by David Kluger work together in creating a dark and melancholic atmosphere without interfering in the theatrics itself. The Sound of Inside is dark yet a departure from becoming a depressing play. Each of the 90 minutes will have the audience anticipating what’s to come and manages to leave them spellbound. Watch The Sound of Inside, the most interesting Broadway show this fall!

The Sound Inside: Broadway Story

The story of The Sound Inside begins in New Haven where a woman goes through unspeakable pain and finds a way to overcome it. Bella Baird is a 53-year-old Yale professor and a writer of fiction who has been diagnosed with a terminal illness - stomach cancer. She goes through the notions of treating cancer, going to chemotherapy but to no avail and eventually, the prognosis is deemed fatal. Bella decides to work on her last book, which is about a teacher who has cancer. Although a fiction writer, the ideas seem to be emanating from her own life. She lives alone on campus and has no family to speak of. She decides to involve a young student from Vermont, Christopher Dunn, in her writing process.

Christopher is anti-millennial, a student of creative writing and also writing a seemingly autobiographical book. Both of them share writing sessions as they go about writing their books, which may or may not be about their lives. They discuss works of other writers and while this may seem like two parallel storylines, they merge when Bella asks Christopher to do something unthinkable. Watch The Sound Inside to find out what happens to Bella and Christopher, and see if their books ever get written. 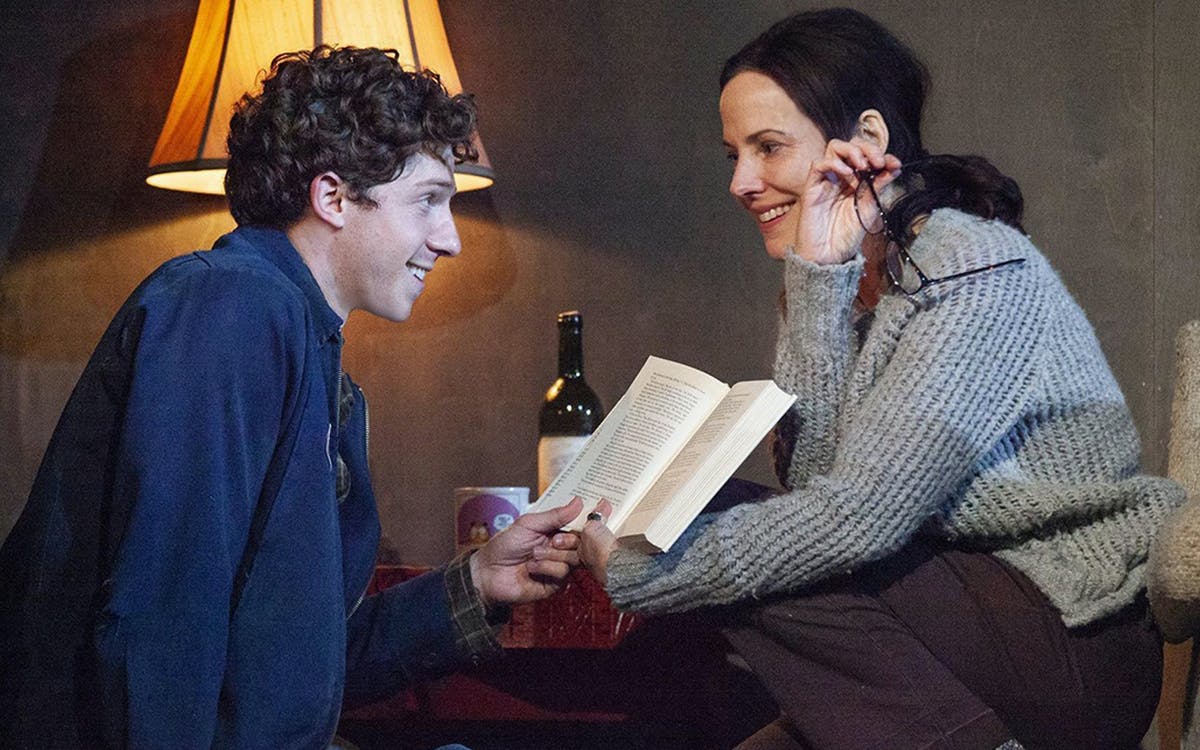 Duration
The show runs for 1 hour and 30 minutes with no intermission.

Cast
Mary-Louise Parker as Bella Baird
Will Hochman as Christopher

Audience
Children under the age of 4 are not permitted in the theatre.

The Sound Inside Broadway Tickets

Looking for discounts on The Sound Inside Broadway tickets?

Have a look at the real-time seat availability and prices of different sections for The Sound Inside. In the interactive seat-map, select the date that you would like to watch the show and check out the seats available for that day. You can filter the seats as per your desired price range and purchase tickets directly.

The Sound Inside - Studio 54

The Sound Inside premiered at the Williamson Theatre Festival in July 2018. It is the show’s first outing on Broadway and will play at Studio 54 for a limited season.

The Sound Inside Reviews

“That’s the silence — a beautiful hush of dread and wonder — that envelops “The Sound Inside,” Adam Rapp’s astonishing new play.”
- New York Times

““The Sound Inside” is a gripping stunner of a 90-minute play from Rapp, a child of Joliet known for his dense, sophisticated and narrative-heavy writing.”
- Chicago Tribute

Note: The reviews are of an earlier version of the show. For latest reviews and seating tips, click here.

The Studio 54 is one of the oldest Broadway theatres and was built in 1927 as the Gallo Opera House. It is located at 254 West 54th Street. The theatre went through several name changes and functions; eventually, it was bought over by the Roundabout Theatre Company. The theatre is fairly large with a seating capacity of 1,006 seats that are divided across two levels – Orchestra and Mezzanine. The basement is home to a popular restaurant and nightclub, Feinstein’s/54 Below. Some of the notable productions at Studio 54 have been Kiss Me Kate, Sondheim on Sondheim, Cabaret, A Streetcar Named Desire, and Children of a Lesser God.

The Sound Inside Broadway Tickets

For those looking to book discounted The Sound Inside Broadway tickets online, platforms like TodayTix and Headout are your best bet, as they source tickets directly from the box office and scour the internet for any discount codes available for these shows. Any price advantages are then passed on ensuring that you are paying the lowest prices.

The Headout advantage for booking The Sound Inside Broadway tickets:

Studio 54 - The Sound Inside Ticket Prices