Things to do in Granada Granada Travel Guide

Situated in Andalusia, Granada is a heavenly city that captivates visitors with its cultural and historic heritage. The city boasts numerous palaces and gardens owing its legacy to the Moorish and Spanish Empires. Be a guest at this ancient city and experience its sophisticated lifestyle.


The Moorish Jewel
Granada is a 1000 years old city and is a melting pot of both modern and ancient times. The preservation of its history, medieval complexes, contemporary and classically designed buildings puts Granada on a pedestal. The province of Granada is a present to Spain by the Moorish rulers with legendary mausoleums like Alhambra and the Nasrid Palaces that house alluring pools, courtyards and vibrant blooms. Dwelt with the air of chic streets and architectural marvel at every corner, this city leaves an unfading trace of awe in every visitor's memory.

The Red Castle- Alhambra
Founded in 1238, the Emirate of Granada is home to various World Heritage sites. One such site is the palace city of Alhambra, Granada’s most emblematic monument and the most visited place in Spain. Alhambra sits on the foothills of the Sierra Nevada, lying just above the city of Granada. Previously home to the Nasrid Sultans, the palace offers an opportunity to truly admire the extravagant Moorish architecture, lush gardens, cascading water features and glorious views of the city.

Gastronomy
The culinary history of Granada is dense with Narsid, Middle Eastern, Sephardi and Roman impact. Eating is inexpensive as most of the bars serve free Tapas (a small portion of food) with every drink. Every pedestrian street is lined with a wide variety of restaurants. Ask for Un Costa, a local wine that is handy at every bar. Indulge yourself in the local gastronomy and the succulent flavours of the Andalusian city.

Granada is a magical city with its roots firmly seated to date in the Moorish era. It’s the kind of city you will dream of when you hear fables of Arabian nights. The grand Nasrid Palaces, the magnificent gardens, the opulent past and humbling town is a living charmer. Granada will surely inspire you whether you are a history geek in search of a city to relive the ancient era or a modern vagabond. Our Granada travel guide exists to empower you with how you can explore and experience the best of the city.

Spain has undertaken many safety protocols and measures to curb the spread of Covid-19. Granada has implemented additional rules and regulations on the same account. Here's all about the travel restrictions in Granada.

Here is all you need to know about the ancient city to plan a smooth visit.

Short summers and long winters make up the yearly calendar of Granada. No wonder the Moorish Kings built their palaces to resemble a forever spring season. Below is a brief look at the seasons and what to expect during them.

You can check the weather here.

Spring is the best time to visit Granada. The weather compliments the lush gardens and it is not too hot to wander in the old neighbourhoods. You’ll find swarms of tourists getting the best of the climate and touring in every direction. Aloof from Generalife gardens, Carmen de Los Martires is a lively bed of flowers that you should stop by.

Believe it or not, the city gets more lively in the summer. Although the sun can be scorching, most events like Feria del Corpus take place during this season. It is highly recommended that you carry sunscreen, light clothes, light footwear and an oversized hat while packing. Steam massages and sauna baths are activities you should not miss!

If you want to catch the religious events of the city, Auntum is just the right time. Virgen de las Angustias is a cultural event that takes place on the last Sunday of September where people march in a procession following the idol of the Virgin Mary. Sunny days are still in abundance and you can catch sights of the quaint towns of Sierra Nevada, and Montefrío.

If you are rightly dressed, Granada’s winters are more than bearable; they’re beautiful. Though the temperatures can drop below minus 0, the city still experiences some sun since it sits 700 meters above sea level and close to the Sierra Nevada. Among the several activities, skiing down the snow of Sierra Nevada stands out.

Although Granada mostly enjoys pleasant weather all year round, Spring and Autumn offer the best temperatures to take a stroll across all monuments and gardens. Most of the cultural events also occur during the same time. If you want to travel on a smaller budget, Summer is perfect since it’s less crowded and accommodations are cheaper.

Granada is on the lower end of spending when compared to other Spanish cities like Barcelona or Madrid, yet offers plenty of things to see and do. Here’s an approximate of how much you would need in Granada in a day.

Granada on a Budget - €40 per day
Midrange spending in Granada - €98 per day
Luxury vacation in Granada - £228 per day
Use this tool to further budget your trip.

All tourists need to obtain Health Control Form (FCS) to travel to Spain due to the Covid-19 pandemic. There is no specific tourist visa available. However, if you are visiting for less than 90 days, you can opt-in, Melbourne has a festival for it whether or the Schengen Visa. For more information click here.

Take a luxurious bath and a hot sauna massage in the hammam, a traditional Arab bathhouse. Especially at Banuelos, an ancient bathhouse at the foundation of the Alambra. It dates back to the 11th century and is free on Sundays.

Albaicin is the moorish quarter of the city and resembles an ancient town in all aspects. With intact medieval architecture, the town is filled with many Andalusi monuments such as the Bañuelo, Casa Morisca, Palaci ode Dar al-Horra, and Corral del Carbón.

A bike tour for a change

Zooming past the beautiful countryside of Andalusia while cycling from one monument to another is a fun ride. There are many companies offering cycling tours while providing a guide to explain insider knowledge. If you don’t know to ride a bicycle, don’t worry. It’s fairly easier to learn in a few hours.

If you want to experiment with local cooking, shop for fresh fruits and veggies, head to the Mercado San Agustin Market. You can buy everything from cheese to meat and a small lunch at half price.

Buying Alhambra tickets can be quite a complicated affair. Here's why. A much simpler and easier solution is to grab tickets for an Alhambra Tour. The walls of the Alcazaba fortress and the hallways of Nasrid Palace whisper secrets of the Moorish past that no audio guide or online article can tell you as the locals do. Know every inch of the city, the palaces and its history from an expert local guide on a guided tour.
Before you sign up for an Alhambra tour, know all about the different types of guided tours available, a few know-hows that will help you pick the right tour and our curation of the Top 8 recommended Alhambra Tours.

Once you've had your share of Granada and its offerings, take a day trip to any of the nearby towns - be it the mountainous landscapes of Las Alpujarras or the beaches of Marbella. Here are our top picks for the best day trips from Granada. 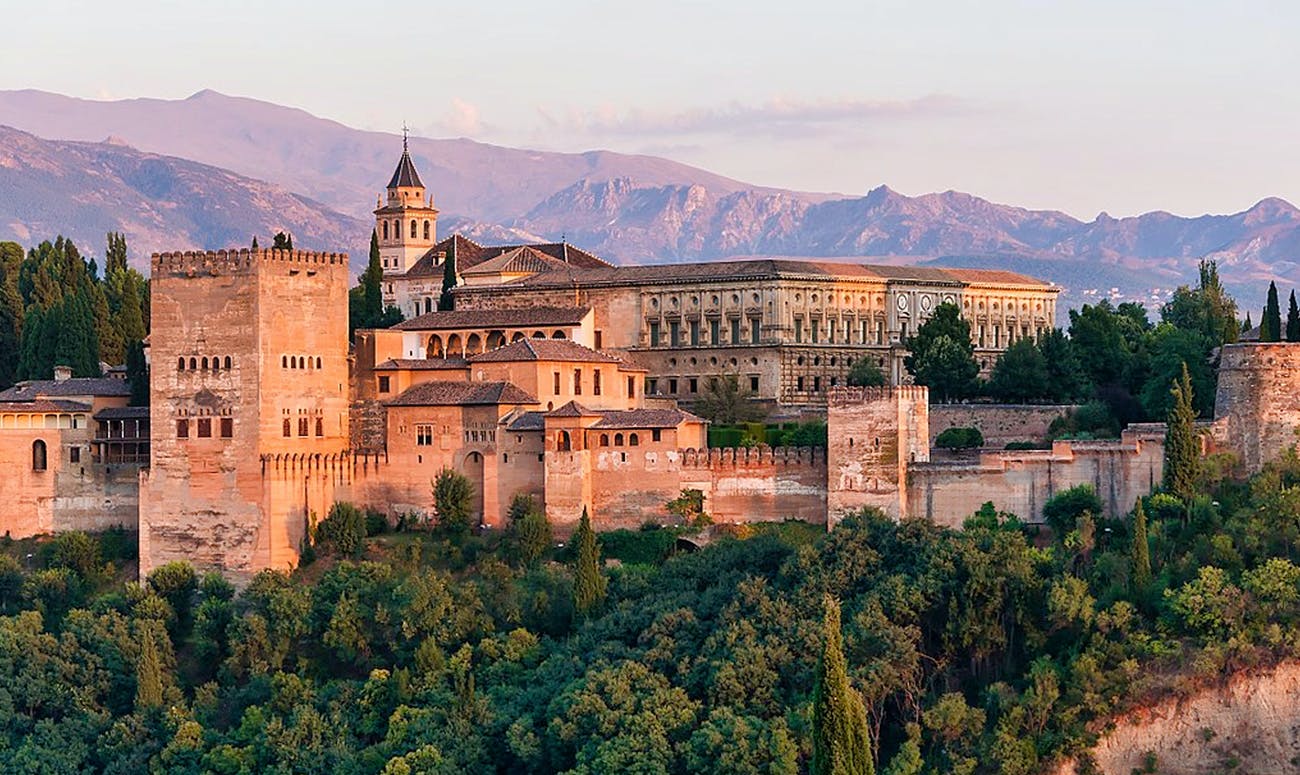 The word Granada brings to mind the Moorish jewel "Alhambra", but this quaint Andalusian town is so much more than Alhambra! In fact, the Alhambra Palaces are just a tiny fragment of this town. You have the Granada Cathedral, the Royal Chapel, Cartuja Monastery, San Jerónimo Monastery, Science Park Museum, Zafra’s House, Cuarto Real, Sacramonte Abbey, the Casa de los Tiros Museum and a lot more waiting to be explored. And, the best way to explore them all without burning a hole in your pocket would be to buy the Granada Card. This pass bundles all of the above attractions and more for an economical price and allows you to roam the city with just one card in your bag.

all about The Granada City Pass 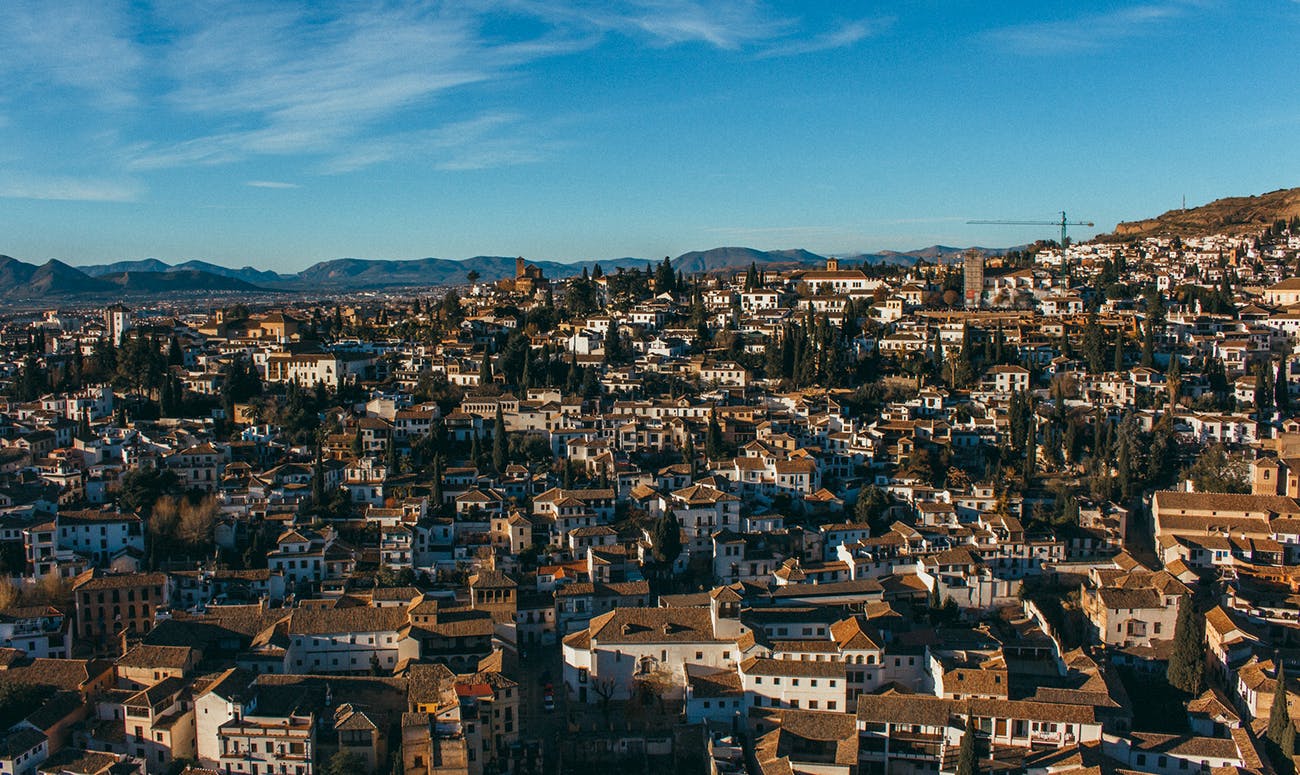 Hotels in Granada are unlike any other in the world. They let you see a peek of the city’s ancient charm from your window while feasting on delicious tapas. The buildings are structured in Spanish vernacular architecture, which in itself is a treat. The service, breakfast buffets, lounges and bars are an add on indulgence. Hoteling in Granada is all in all a luxurious affair.

Browse the best hotels in Granada 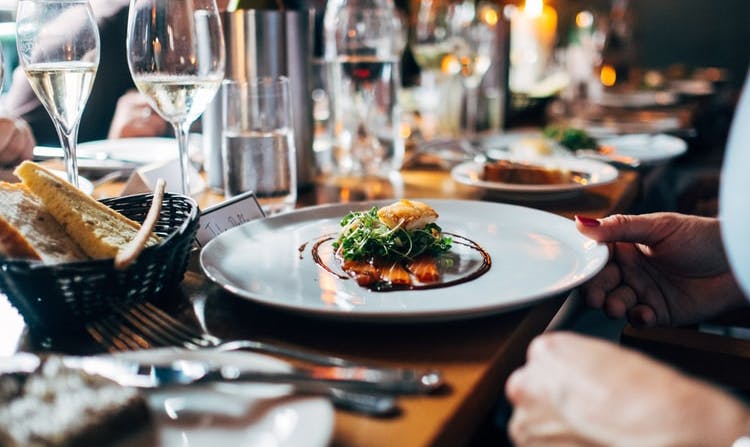 Must-try Food in Granada
While there is a wide assortment of dishes and desserts, here are some firm favourites of the locals that should not miss.

How to Save Money in Granada

Here are some cool ways to save some bucks while in Granada.

Save big by staying during weekdays

A big part of your travel budget is always consumed by accommodations. The best way to beat this is by staying during the weekdays instead of weekends. You can also explore the city conveniently since it is less crowded those days.

There are plenty of other attractions you can explore for free. Some of them best free experiences in Granada are the flea markets at Zaidín, bath at Banuelo, a walk along Paseo de los Tristes, and watching the sunset at Mirador de San Nicolas.

Stop by during the off-season

Off seasons offer great discounts on everything from accommodations, tickets to higher bargains on street souvenirs. The offseason in Granada lasts from December to March and from June to September.

Hiring a car is more expensive than taking a bus. And when you compare the cost of hiring for a week vs travelling by bus, you will save hundreds and thank us.

Granada has a year long calendar of festivals - some cultural, some religious, some patriotic, a few music festivals and so on. Here are the top recurring festivals that you should know of: 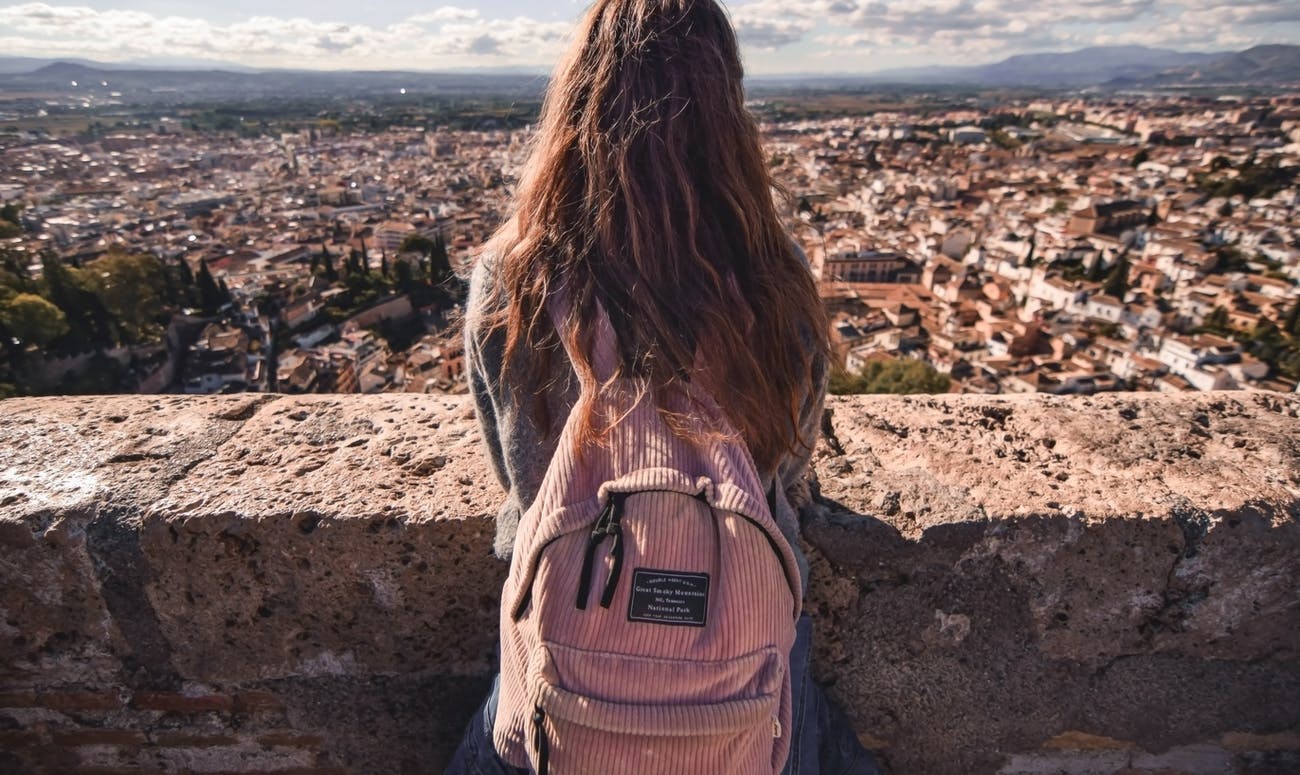 Although the present-day Granada is a predominantly catholic town, its roots date back to Iberian times. Then came the Romans, Visigoths and Muslims. Among all of them, the Moorish presence is the most visible since the rules the city for about 800 years.

Home of the free-spirited

In Granada, the city's bohemian eccentric lifestyle is hard to miss. One of the places it is most visible is at Calle Elvira. The city is also recognised for poets and artists such as Federico Garcia Lorca.

Granda is split into a modern, contemporary town and a medieval, sophisticated one. Plaza Nueva and Calle Reyes Catolicos around the cathedral are part of the new town. If you travel up the hill, you will find Albaicin, Sacromonte, and the Jewish neighbourhood which are the living ancient heritages. Make sure you take time to explore both halves.

A – Z Guide On Visiting The Alhambra Palace Granada

Top 10 things to do In Granada