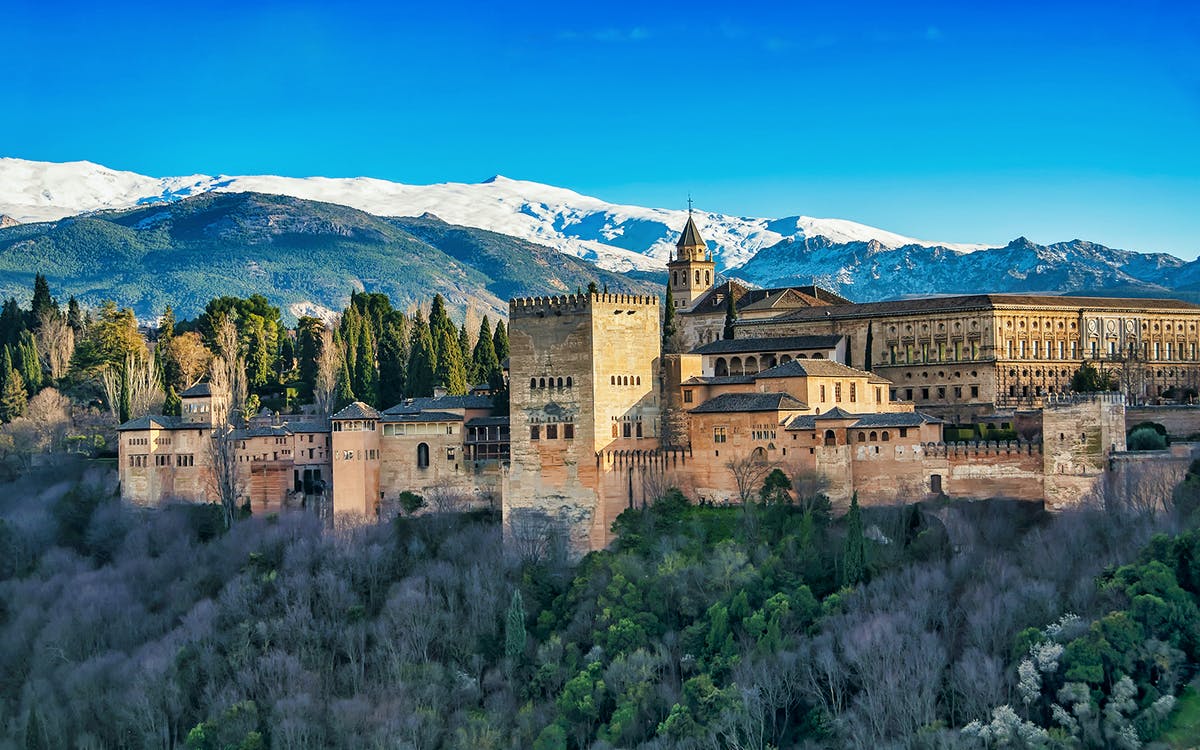 Go on a 3-hour guided tour of the entire Alhambra complex, that includes the Carlos V Palace, Generalife Gardens, Medina, the Alcazaba Fortress and, of course, the famous Nasrid Palaces, accompanied by either an official English, French or Spanish-speaking guide.

Gain entry to the Alhambra, a National and Artistic Monument of Spain, on this 3-hour tour. Walk through the passages and admire the different styles of architecture that were used as the Palace expanded. Your guide will regale you with tales about the Palace's history and provenance as you make your way through, and the complimentary audio headsets will enable you to hear your guide clearly.

See the Various Areas of the Alhambra Complex Accompanied by an English, French or Spanish-Speaking Guide

The Palace of Charles V is an architectural wonder that boasts of a plateresque style design with traces of Gothic and Spanish origin, which was common in the Renaissance era. It is also famous popular for its unique collection of Hispano-Muslim and Nasrid artworks.

The Generalife is also known as the Architect's Garden, is easily one of the oldest examples of Moorish gardens. Cool turquoise water, flower beds, and lush greenery make the Generalife a beautiful sight.

Also visit the Alcazaba, one of the oldest structures of Alhambra. It served both as a fortress as well as a watchtower during the Nasrid rule. Follow it up with a visit to the Nasrid Palaces. While most of the structures have perished over the years, some of them still remain. Few of them being the Mexuar, which was once one of the most prominent parts of the palace, and the Court of Lions (Palacio de Los Leones), and also a rather private area of the palace.

As you step out of the Nasrid Palaces, you can see the Medina, which is not very easily accessible due to its difficult route. This is a citadel that has the remains of several ovens, silos, cisterns, public baths, cisterns, and workshops, as well as the houses of top government officials, employees, and court servants. You can still see the foundations of several ruins, some of which were reconstructed, standing tall to this day.

This 3-hour tour runs daily. Please check the timings and availability on the next page before booking. While the start time of the tour may be altered sometimes, customers will always be updated well within time of any changes.

This tour is not easily accessible for those with mobility impairments.

You will receive an email with your Guided Tour: Alhambra, Nasrid Palaces, Alcazaba and Generalife Gardens voucher shortly. You may display the voucher on your mobile device at the meeting point on the day of the experience.

Meet your guide at the café-bar El Polinario next to the Alhambra ticket office.

Missing any information?
Yes
No
This experience is unavailable
You'll be the first to know when these tickets are back online.
notify me
Awesome!We will notify you.
Why Headout?
Trusted platform used by 100K+ people, each month
Get the lowest prices and last minute availability
Discover and connect with 10,000+ experiences
Browse verified reviews and professional photographs
Have a question? Live chat with our experts 24/7
Other experiences similar to Guided Tour: Alhambra, Nasrid Palaces, Alcazaba and Generalife Gardens
Landmarks
Alhambra Tickets with Nasrid Palace
Instant Confirmation
4.2
(1.7K)
€14.85
Guided Tours
Guided Alhambra Tour with Skip-the-Line Access
Instant Confirmation
4.6
(4.8K)
from €36
City Passes
Granada Card with Priority Access to Alhambra
Instant Confirmation
4.5
(3.1K)
€40
Guided Tours
Alhambra Skip-the-Line Guided Tour with Alcazaba & Generalife
4.6
(3.1K)
from €30
Guided Tours
Small-Group Alhambra Guided Tour with Nasrid Palaces
Instant Confirmation
4.4
(3.1K)
from €54
The world on your tap!Get the Headout app to get tickets on your phone and access app-only deals. Talk about win-win.
We've served 15 million+ guests and we are here for you
15 million +Happy customers across 10,000+ experiences
4.4/55,000+ verified reviews with 90% excellent score
In the MediaFeatured and recommended by the best brands
24 x 7 Help CenterHave a question? Live chat with local experts anywhere, anytime
Headout is building the future of how we experience our cities.
Made with ❤️ all over the 🌎
Headout Inc.
82 Nassau St #60351 New York, NY 10038
Cities
New YorkLas VegasRomeParisLondonDubaiBarcelona+74 more
Headout
About UsHelpCareersTravel BlogCompany BlogCreator Partnerships
Partners
Join HeadoutSupply Partner HubAffiliates
© Headout Inc
Privacy PolicyTerms of Usage