Discover The Best Day Tours of Montserrat From Barcelona

Where the city of Barcelona is energetic, vibrant and spirited; the mountain range of Montserrat is peaceful, relaxing and tranquil. Named after its characteristic jagged peaks – literally, ‘saw mountain’ in Catalan – the Montserrat mountain is a mere 50 km from Barcelona, Spain, and is thronged by tourists all year. This Catalonian destination is known for its breathtaking natural beauty, and is a site of immense religious significance in Spain. Visit Montserrat to admire astonishing views of the mountain range, to relax in the peaceful atmosphere of the monastery, to pray to the Black Madonna, to hike up to the top of the mountain and watch the sunrise, to view artistic masterpieces at the museum, to listen in bliss to the famous boy choir in the Basilica- the possibilities are endless! 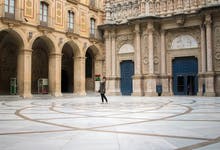 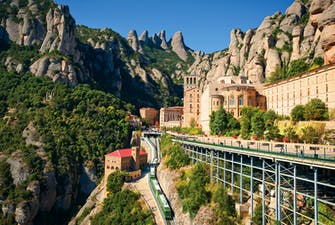 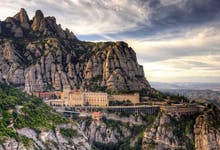 Guided Tours of Montserrat from Barcelona

There is so much to see and experience in Montserrat that it makes perfect sense to go for a guided tour with an official Catalan historian. Montserrat's distance of 50km from Barcelona makes it an ideal destination for day trips from Barcelona.

Montserrat is a destination of many facets. As Spain’s first National Park, it is complete with its own collection of flora and fauna (and a museum too!), strikingly pink conglomerate mountains and neatly marked hiking paths and nature walks. More importantly, Montserrat is the home of one of the few Black Madonna’s in Europe, known as la Moreneta ("The little dark-skinned one"). In fact, the Virgin of Montserrat is the Patron saint of Catalonia, hence making this Basilica an important religious site, as well as a popular destination for tourists around the world.

The mountain is awash with culture and history – while the Monastery is thought to be the site of the Holy Grail in the popular Arthurian myth, all the structures of Montserrat are thought to be built around the Virgin’s statue. According to legend, it was discovered by the shepherds of the region in the 9th century in the Santa Cova, indicated to them by a bright, shining light. When the shepherds wanted to move the Black Virgin to the nearby village of Manresa, it became so heavy that they considered it to be a sign from God to leave it on the mountain. Today, the statue at the Basilica, and the monastery itself are famous worldwide, and are a must-visit if you’re in Barcelona! What to expect at Montserrat?

Montserrat is known not just for its beauty, but also for its place in history and the culture that has been built around it. Some of the things you shouldn’t miss include:

Santa Maria de Montserrat, the Benedictine Abbey, is the host of the famous Catalonian Virgin of Montserrat. Founded in the 9th century, the little monastery began to receive pilgrims and visitors who helped to spread the stories of miracles and wonders performed by the Virgin. Legend has it that it was once home to the Holy Grail – in fact, the ancient building of the Abbey was demolished by Napoleanic troops who were trying to search for it. The Abbey was also once the centre of culture, and produced many important musical composers from its school of music. Today, it is home to over 70 monks, and is still visited by pilgrims and tourists 1000 years after it was founded. This beautiful Gothic building houses what what is arguably Montserrat's most important feature - the statue of the Black Madonna. Located at the back of the Basilica, the statue sits behind a sheet of glass with a single hand, holding a sphere to symbolize the universe, outside of it. Be prepared to wait in a queue as the Black Madonna is one of the most popular images in Spain. The Basilica itself is decorated with ornate hanging candles around the edges, representing the constant presence of the people of Catalunya at the feet of St. Mary of Montserrat. The church also has sculptures of prophets: Ezekial, Jeremiah, Isiah and Daniel. No visit to Montserrat is complete without paying respects to the Virgin Mary and her infant son. 3. The Funiculars Of Santa Cova And Of Sant Joan

The Santa Cova funicular, or cable railway, connects to the Santa Cova cave chapel. This historic site was where, according to legend, the image of Mare de Deu de Montserrat (the Virgin Mary) was seen by shepherds. Stepping down from the funicular, visitors can also see the Rosari Monumental, the most important group of outdoor sculptures in Catalan Modernism, with pieces by Antonio Gaudí and Josep Llimona, among other famous artists. The Sant Joan funicular provides a bird’s eye view of Montserrat mountain, the monastery, the Pyrenees ranges and surrounding areas. If you’re a nature enthusiast, you can visit the museum 'Aula de la Natur' - the Nature Centre – near the exit of the funicular station building to learn more about the flora and fauna in the natural park surrounding Montserrat. Nature walks are also quite popular around the Montserrat Natural Park. One of these walks leads to Sant Jeroni, the highest peak of Montserrat. Tickets for both of these can be bought at the funicular station buildings. This museum is a delight for art-lovers and amateurs alike. Walk around the halls of the museum and find pieces by Picasso, Dali and Caravaggio nestled in amongst less well-known artists. The 1300 pieces of art and six permanent collections hosted here are from a broad chronological timeline – one can find an Egyptian sarcophagus from 13th century BC, and a piece by Josep M Subirachs, made in 2001. Located in St. Mary’s Square, ticket prices range from 3 Euros to 7.50 Euros. Audio guides are also available to provide commentary for important works around the museum. The Cross of Sant Miquel can be reached through a hike from the Monastery. Though steep and seemingly treacherous, this reasonably easy hike takes about 40-60 minutes. Be sure to take in the view of the mountains and the monastery on the way! For those interested in speleology – caving or spelunking- the Caves of Salnitre are quite a hotspot. Visitors are shown the underground area of the initial 500 meters only, as the rest of the territories are closed to the public. View the formation of stalactites and the mysterious underground architecture with several caves, as you navigate through narrow and steep steps to visit sites like the legendary La Sala del Pozo del Diablo (Cave of the Devil’s Well) goes down the narrowest and steepest steps. Tours to the Caves are generally organized from the nearby city of Collbató. Also called ‘Aerie de Montserrat’, the humble cable car is not just another means of transport. While ascending the 4,000 ft from the bottom of the Montserrat Mountain to the Monastery, you’ll experience breathtaking views of the River Llobregat, the village of Monistrol and even the famous Santa Cove shrine. Tickets for the cable car can be bought as a combined ticket, to include the price of the cable car and the train from Barcelona; or they can be bought to cover only the cable car. Guided Tours of Montserrat from Barcelona 2. Half day Montserrat Tour from Barcelona Half day Montserrat Tour from Barcelona Save €6 on your first booking with Headout when you use promo code 'GOBARCA'!

Getting to Montserrat from Barcelona

If you aren’t one for guided tours, there are still many quick and easy options to get from Montserrat to Barcelona, that aren’t too heavy on the pocket.

Train and Cable Car
This is the best option for those who want to experience Montserrat’s scenic beauty at its best. From Plaça Espanya in Barcelona, take the R5 line to Aeri de Montserrat, from where a cable car can be taken to the top of the mountain. The journey by train takes approximately one and a half hours. Combined tickets can be purchased at the Plaça Espanya station.

Train and Rack Railway
This option is lighter on the pocket than travelling by cable car, though it may take you longer. From Plaça Espanya in Barcelona, take the R5 line one stop farther to Monistrol de Montserrat. Change to the Cremallera, a green railway that runs to the top of the mountain. Combined tickets can be purchased at Plaça Espanya.

Train and Hiking
Calling all exercise addicts! This is the best option for a fun group hike. From Plaça Espanya, take the R5 line to Monistrol de Montserrat. From the train station, take a walk through the town of Monistrol and hike your way up the scenic mountains of Montserrat!

By Bus
Buses usually leave the Estacio Sants train station for Montserrat. This is generally not the most popular option, as most opt to travel by train or cable car to enjoy the beauty of the mountain range.

Lovely place hidden in the mountains. The views from the monastery are absolutely breathtaking and well worth the visit! Well within reach from Barcelona by train, with lots of opportunities to hike around. I'll definitely come back if I ever get a chance.

What a beautiful place! I was humbled to have the chance to visit such a historic place. It was beautiful, especially in the fog. The church was beautiful! Check out the gift shop and get some olive oil and tea made by the monks.

Read what others have to say about Montserrat on TripAdvisor.

Save €6 on your first booking with Headout when you use promo code 'GOBARCA'!