Things to do in Granada Alhambra Palace Tickets Generalife Alhambra

A stroll down the cypress tree-lined avenues in the Generalife Gardens will transport you to the age of the Nasrid Sultans back in the 13th century. A sense of serenity envelopes you as you amble through the myrtle hedges, gardens with orange trees, courtyards with stone fountains and water channels with jets. The gurgling water sounds with the picturesque elements of Islamic garden architecture make the Generalife Gardens a must-visit while on a tour of the Alhambra Palace. A medieval garden retreat of the sultans, the Generalife Gardens is the most beautiful part of the Alhambra and the best way to end your day at the complex.

Generalife Alhambra - History Under A Minute

Palacio de Generalife and the Generalife Gardens were initially planned in the 13th century as a retreat for the sultans. Built along the slopes of the Cerro del Sol (Hill of the Sun), it looked over the Genil and Daroo valleys and the Alhambra. Palacio de Generalife was the summer palace of the Nasrid rulers and were designed to offer calm and relaxation and included the use of water and vegetation like manicured gardens and trees.

The name has several theories, but its closest translation is from ‘Jardines del Alarife’ or the Garden of the Architect. The Generalife Gardens have been altered over the centuries, but the terrace gardens have retained their essence. The main architectural component of the gardens is the simple yet medieval palace with patios, courtyards, and pavilions.

Alhambra
Skip The Line Tour to Alhambra, Generalife, Alcaza...
from
€61

Alhambra
Skip The Line Tour to Alhambra, Generalife and Alc...
from
€49
5% Cashback 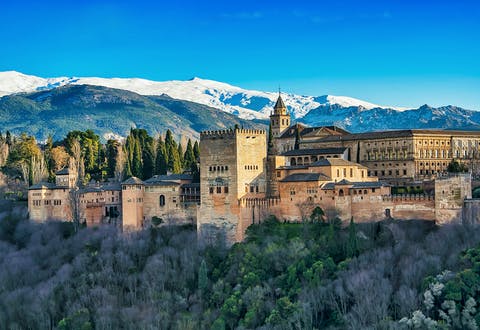 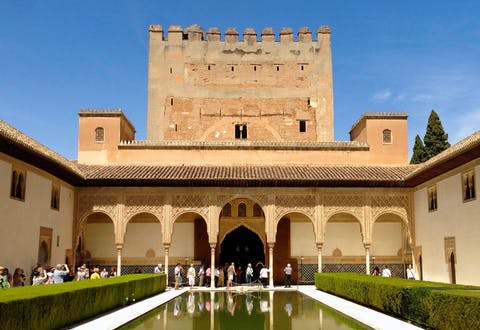 The Generalife Gardens are divided into 3 parts - Lower Gardens, the Palace of the Generalife and the High Gardens.

Your walk through Generalife starts through the new Generalife gardens, past the avenue of the Cypress trees. Ahead lays the Generalife Theatre, which was built in 1952 and was not included in the original garden plan. Past the theatre, you will visit the lower gardens and enter the Palace of the Generalife where the Patio de la Acequia leads to the upper terraces. Next is the Courtyard of the Sultana and then a climb up the Escalera del Agua to the highest point of the Generalife Gardens.

The Court of the Main Canal was an ornamental addition around the water channel that brings the irrigation water from the Alhambra. It connects the lower gardens and upper gardens and includes a high pavilion from where the patio and gardens beyond can be observed. It was designed as an interior garden, with the exception of the small lookout point on the west. As a result, it was transformed into a sort of belvedere when the landscape appeared, and the intimate quality of the court was lost.

Entrance to the Generalife Palace is through a tiny door, partially hidden by undergrowth and embedded in traces of marble, with a tiled lintel and the arch-key marking. A steep narrow stairway will take you to the residences and rooms, connected to the Court of the Main Canal (Patio de la Acequia)which in turn leads to an arcaded gallery, with five arches and bedchambers, and then on to the Royal Chamber.

Legend goes that the last Nasrid ruler Bombadil's wife used to have a rendezvous with a knight of the Abencerrajes family in this courtyard. This arcaded structure dates back to 1584 and flaunts trimmed myrtle hedges, the ancient cypress trees and the stone fountains with jets. A tiny door to the south leads back to the Court of the Main Canal (Patio de la Acequia), and the rest of the Historic-Artistic Monuments Complex.

The ‘water stairway’ was a functional yet ambitious feature in the Generalife Gardens. Built during the Muslim period, the stairway was designed in three flights with water channels for handrails! The stairway is flanked by laurel trees which form a vaulted canopy that makes for a surreal visual. To reach the highest part of the Generalife you must take the Water Stairway.

The Festival of Music and Dance of Granada in 1952 led to the the building of a theatre. The gardens were extended southward to build the symmetrically horseshoe shaped outdoor theatre, with a central seating area and boxes on the sides, reflecting a western mannerist and baroque style. Recently the Generalife theatre has undergone restoration, and its installations and acoustics have been improved.

Wondering which tickets work best to explore the Alhambra gardens? Here's our selection of the top Alhambra Gardens tickets.

Getting to Generalife Alhambra

Know all about Alhambra entrances and which entrance is closest to the Generalife Gardens.

The Alhambra Palace is open every day of the year, except 25th of December and January 1st

The last visit to the Nasrid Palaces will be one hour before the closing time.

Away from the architectural grandeur of the Alhambra are the Generalife Gardens which revel in the wealth of nature. A visit to Generalife Alhambra will offer a peek into Islamic garden architecture. Take a tour and explore the gardens to find out the intriguing stories of the Sultana, the subsequent Christian residents and the desire of royalty to get away from the political machinations at the Alhambra at the peaceful and breathtaking Generalife Gardens!

How to Skip the Lines at the Alhambra– Your Guide to Bypassing the Long Queues
What’s Inside The Alhambra?
Alhambra Palace Entrances Deconstructed – Know Which Alhambra Entrance To Choose
The Alhambra in Granada Now Open To The Public Post COVID-19 Lockdown
All About Visiting The Heart of Alhambra – The Nasrid Palaces
Alcazaba Granada | The Fortress of Alhambra
Top Alhambra Tours For The Ultimate Alhambra Granada Experience
Visiting Alhambra Granada – All Questions Answered