Get Discounts On Newsical The Musical Off-Broadway Tickets!

Things to do in New York Broadway Broadway Show Tickets Get Discounts On Newsical The Musical Off-Broadway Tickets!

Good news satire, great acting chops, and irreverent comedy are guaranteed at Newsical the Musical. The popular musical revue has been running for eight years straight, and the crowds keep coming in to watch the theatrics of the cast and the caustic commentary on the political and current affairs situation across the world and right at home. The latest edition of the show is called ‘The Spoof of the Union’ and assures a laughter riot. The original lyrics and fun music will have you humming the ludicrous songs on your way back home!

Newsical The Musical: About The Show

Newsical the Musical is created by Rick Crom who comes with a range of experience in creating Off-Broadway and Cabaret revues. The show is produced by Tom D’Angora who has also produced other exciting shows including ‘The Marvelous Wondrettes,’ ‘Naked Boys Singing’ and ‘Divas I’ve Done’. Long-term cast member Christine Pedi joins the cast this season, and other members include Scott Foster, Susan Mosher, and Michael West. The show has been running at the Kirk Theatre and runs for 80 minutes without a break. Newsical the Musical joins the ranks as the 14th longest-running Off-Broadway show in New York, and it’s all due to the wonderful cast and humorous writing!

Newsical has done more than 2500 performances and has gone through almost as many news cycles. The musical revue show is written in sync with the current political and news scenario, tackling controversial topics and offering a cynical and satirical take on the same. Over the past eight years, Newsical has seen three Presidential terms, providing enough fodder for regular new shows. Everyone from Barack Obama to Donald Trump, Hillary to Bernie, Oprah to Lady Gaga, has been parodied on Newsical The Musical.

Given the fast-paced competition from television late-night entertainment, Newsical has managed to stay relevant by offering fun and comic impersonations, sketches that are brand new and on-stage theatrics that are bound to draw laughs. Anything and everything is game on this news satire, and you will be guaranteed a new show every time you watch it!

Duration
1 hour 30 minutes with no intermission

Audience
The show is suitable for ages 12+ with adult supervision, children under 4 will not be admitted.

Seating
The Kirk Theatre has a seating capacity of 99. 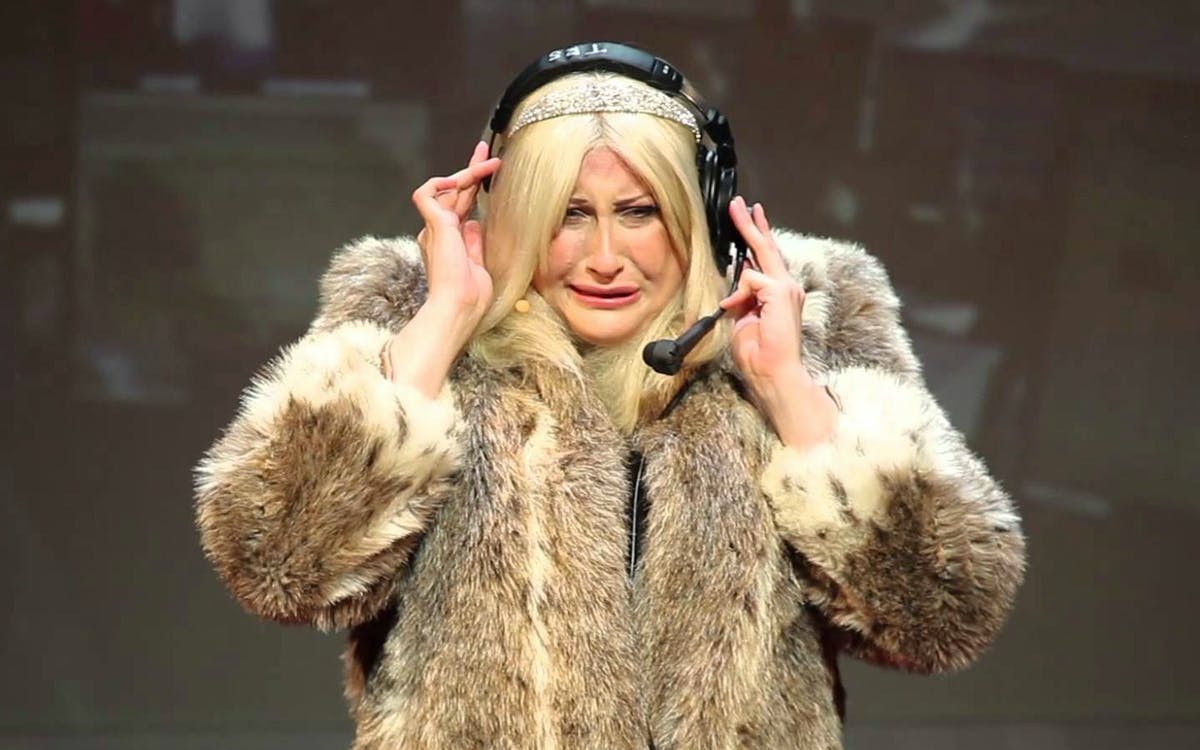 Looking out for Newsical The Musical Off Broadway ticket discounts !

Have a look at the real-time seat availability and prices of different sections for Newsical The Musical. In the interactive seat-map, select the date that you would like to watch the show and check out the seats available for that day. You can filter the seats as per your desired price range and purchase tickets directly.

Use promo code GONYC and enjoy Newsical The Musical Off Broadway ticket discounts.

Newsical first premiered Off-Broadway in 2004, followed by a return in 2009. The current production has been running for the 8th year having opened on 9th January 2011 at the Kirk Theatre.

“It’s a news magazine of sorts (think more along the lines of The Daily Show than 60 Minutes) that’s ever changing and always hilarious.”
- The Huffington Post

“A fast, funny and irreverent topic musical revue that zestfully serves up its skewered famous and foolish.”
- New York Times

The Kirk Theatre has been the home for Newsical the Musical since the premiere of its 2011 production. The theatre is located on the second floor of the Theatre Row Building, which is a center for Off-Broadway theatre and has five other small theatres. The Kirk Theatre has seating for 99 guests spread across 14 rows and also has wheelchair access. The theatre interiors have been refurbished and include plush seating with air-conditioning. The other two long-running Off-Broadway shows, ‘The Marvelous Wondrettes’, and ‘Naked Boys Singing’ are currently performing at the Kirk Theatre.

Newsical The Musical Off Broadway Tickets

For those looking to book discounted Newsical The Musical Off Broadway tickets online, platforms like TodayTix and Headout are your best bet, as they source tickets directly from the box office and scour the internet for any discount codes available for these shows. Any price advantages are then passed on ensuring that you are paying the lowest prices.

The Headout advantage for booking Newsical The Musical Off Broadway tickets: