Imagine watching a rock concert, the drums are at the front, the mics and bass and other instruments all over the stage, tangled in a mess of cords jarring your visual perspective. Enter David’s Byrne’s American Utopia and you will wonder if you came to the wrong venue. The empty stage fills up with immaculately dressed grey-suited musicians who bring their instruments with them! They not only play soulful music but dance and move to the rhythm that has not been experienced for any genre except pop. David Byrne defies expectations in this epic live show ‘American Utopia’ and forces you to rethink not only of music but of America itself.

‘As I was recording the songs for my American Utopia album, it occurred to me that they would be exciting to play live – and I realized that a lot of my older material would fit right in. I imagined a live show…I pictured a lot of drummers, a kind of drum line/samba school/second line – that would create the rhythms. I had this vision of how exciting that would be – both for me and for an audience’.

That’s what David Byrne says about his latest show ‘American Utopia’ and true to his vision, he has created an exciting show that has never been showcased on Broadway before. He has revolutionized the way musicians work on the stage and move without any cords tethering them and hampering their movement.

David is one of the best contemporary artists in the world and has won several awards including Academy Awards, Grammy Awards, and Drama Desk awards. He has even been enlisted in the Rock and Roll Hall of Fame and is known for his work as the lead guitarist of band ‘Talking Heads’. The American Utopia show is a visual and motion experience and David has partnered with choreographer Annie B-Parson to create a movement to the legendary songs. The set involves the 12-person company dressed up in grey suits, attached to their instruments moving over the stage without constraint. It’s an extremely freeing experience and one that should not be missed!

David Byrne’s American Utopia is a musical experiment that is based on the solo album of the same name, released in 2018. Following its success, he took the show on live tour where he experimented with the visual aesthetics of the show. David involved a brilliant company of eleven musicians who are amongst the world’s best percussionists and classical musicians. The company includes Jacquelene Acevedo, Gustavo Di Dalva, Daniel Freedman, Chris Giarmo, Tim Keiper, Tendayi Kuumba, Karl Mansfield, Mauro Refosco, Stephane San Juan, Angie Swan, and Bobby Wooten III.

The show includes David’s songs from his previous albums as well as the latest album including ‘I Dance Like This,’ ‘Gasoline and Dirty Sheets,’ and ‘Everybody’s Coming to My House’. The main theme, however, is based on America as a utopian experiment. David’s work over the past few years has been focused on highlighting hope and optimism in a world that is engulfed by despair and bad news.

American Utopia uses a dark and bleak canvas with just the musicians for props and starts off with David handling a vivid pink extraordinarily large brain! The discomforting feeling is set off by the uplifting and novel music that will have you swinging through different moods. In the end, American Utopia is a unique experimental show that changes the definition of a rock concert and makes it a truly enticing theatrical experience! 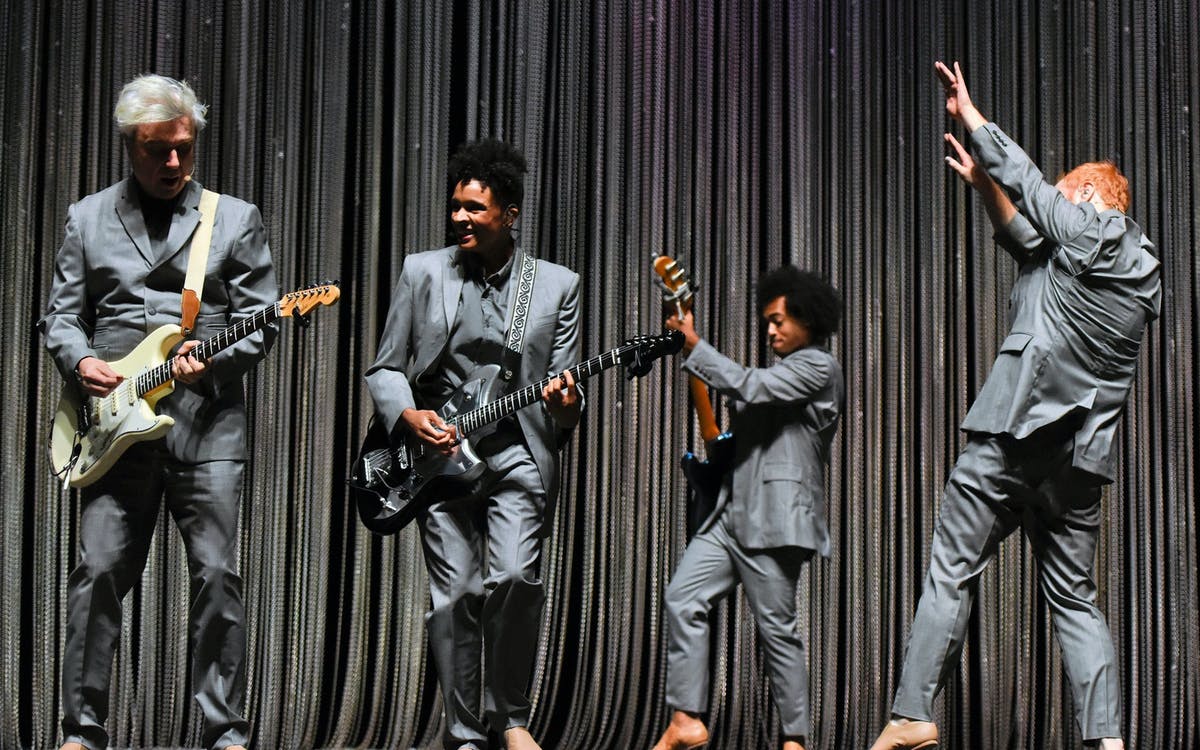 Audience
Children under the age of 4 are not permitted inside the theatre.

Have a look at the real-time seat availability and prices of different sections for David Byrne's American Utopia. In the interactive seat-map, select the date that you would like to watch the show and check out the seats available for that day. You can filter the seats as per your desired price range and purchase tickets directly.

David Byrne’s American Utopia went on a world tour in 2018 post the release of the music album. This production is the Broadway premiere and will run only for a limited period.

“It was a reminder that discomfort charged by passion is not only the emotional mix preferred by Byrne, but also, perhaps, the only kind that ever leads to change.”
- The Atlantic

“This unprecedented, exquisite live show finds a 12-strong band in near-constant motion, with percussion to the fore. Byrne and his troupe of musicians dance magnificently. You could say they also pretty much resolve the whole Cartesian mind/body split in the process.”
- The Guardian

For those looking to book discounted David Byrne's American Utopia Broadway tickets online, platforms like TodayTix and Headout are your best bet, as they source tickets directly from the box office and scour the internet for any discount codes available for these shows. Any price advantages are then passed on ensuring that you are paying the lowest prices.