The Lyric Theatre London opened on 17th December, 1888 with the hit comic opera, ‘Dorothy’. The theatre was designed by renowned architect, C.J Phipps for Henry J. Leslie, who financed the construction of this new theater from the profits he made from ‘Dorothy’. The Lyric Theatre, today, is one of four theatres on Shaftesbury Avenue, the others being the Apollo, Gielgud, and Queens.

An interesting fact about this theatre is that it still uses water to operate its iron curtains. Originally this water was sourced from the Thames River using hydraulically operated lifts, but now this is done using an electric pump.

Some of the most popular and well received productions to have graced the stage here include ‘Blood Brothers’, ‘Five Guys Named Moe’, ‘Cat on a Hot Tin Roof’, and ‘Cabaret’. Currently, Lyric Theatre London plays host to ‘Thriller Live’, a concert revue celebrating and paying homage to the music of The Jackson 5 and the solo work of Michael Jackson. 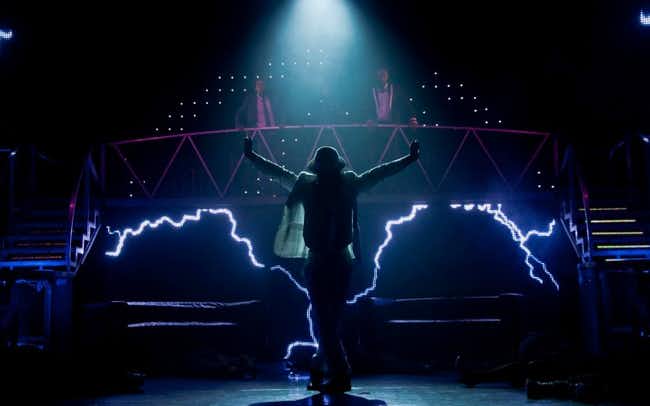 Thriller Live is a tribute to the King of Pop, Michael Jackson and The Jackson 5. This show was first performed in 2006, at the Dominion Theatre, and was choreographed by the famous LaVelle Smith Jr. Following its success in the UK, Thriller Live went on a European Tour, performing shows in Germany, Netherlands, and Scandinavia. It opened on West End at the Lyric Theatre in 2009 and has gone on to become one of the longest running shows in the West End (15th longest to be exact).

Thriller Live features all the music from Michael Jackson’s career, including songs from his early days. Some of the tracks include ‘The Way You Make Me Feel’, ‘Smooth Criminal’, ‘I Want You Back’, ‘Can You Feel It’, ‘Dangerous’, ‘Dirty Diana’, and ‘They Don’t Care About Us’.

Thriller Live takes audiences on a journey of Michael Jackson’s illustrious career spanning over 45 years and also tells the story of the five brothers consisting of Jackie, Tito, Jermaine, Marlon and Michael who came together to form The Jackson 5, in an epic compilation of pop, rock, soul and disco music.

Through an electrifying combination of song and dance, Thriller Live aims to showcase the greatness of the world’s most popular entertainer and performer, Michael Jackson, whose album, ‘Thriller’ is the world’s best-selling record of all time.

Book Thriller Live tickets and save £7 on your first booking. Use promo code GOLDN

Wheelchair user access is located in the Dress Circle Boxes, which are at street level. Wheelchair spaces are in boxes C, D, and E and each box can accommodate 3 people.

Assistive Listening System: There is no assistive listening system in place at the venue.

Bar: There are bars located at each level of the theatre.

Cloakroom: There is a cloakroom at the theatre, where large bags and pushchairs can be checked in for £1.

Guide Dogs: Lyric Theatre allows guide dogs in the theatre. In case you deem the sound too loud, the theatre staff is happy to look after your guide dog. Please note that the theatre can dog sit only two dogs at a time.

Toilets: There are male and female toilets on each level of the theatre. The disabled toilets can be accessed from the Dress Circle.

1. Jamie's Italian: Featuring recipes loved and used by Jamie Oliver, Jamie's Italian brings delicious traditional Italian dishes, which are perfect for a meal before or after the show.

2. Wok to Walk: Another healthy fast food outlet, this place offers great woks and chinese starters at amazing prices. Wok to Walk is one of London’s most highly rated eateries.

3. Gelupo: For all you people with a sweet tooth! Gelupo is famous for its mouth-watering gelatos, ice creams and sorbets. Perfect for a post-theatre snack.

4. Wasabi: A Japanese restaurant located at 33 Shaftesbury Avenue, Wasabi is well known for its sushis and super fast service.

5. Rainforest Cafe: A simple cafe serving up some American and European comfort food like burgers, steaks and sandwiches, this place is perfect for families and little kids.