About The Theatre
Seating Plan
Matilda

The Cambridge Theater is one of a few theaters that opened on the West End in the year 1930, others being the Prince Edward, Phoenix, Whitehall, and the Leicester Square theaters. The Cambridge Theater is located in Camden, facing the famous Seven Dials junction. This elegant structure is built completely from steel and concrete, and is well known for its stunning design, which was created by architects Wimperis, Simpson, and Guthrie. The auditorium has three levels and a capacity of 123, with no obstructive pillars or railings obstructing the view. The theater was refurbished in 1950, when chandeliers and candelabras were added, and again in 1987, by Carl Toms, to help restore it to its original, charming look.

Given the size of the theater, it is best suited for hosting musicals and music events, however small plays also do well here. Some of the most notable dramas that have taken the stage here include, George Bernard Shaw’s ‘Heartbreak House’, William Douglas’ ‘The Reluctant Debutante’ and ‘Billy Liar’ by Keith Waterhouse. Currently, the Cambridge Theater plays host to the world famous musical ‘Matilda’, based on the book by Roald Dahl. Also, here’s a handy link to the seat availability and real time prices for different seats/dates for Matilda The Musical on Headout.

Now Playing At The Cambridge Theatre

“It’s an evening of unadulterated bliss”
- The Guardian 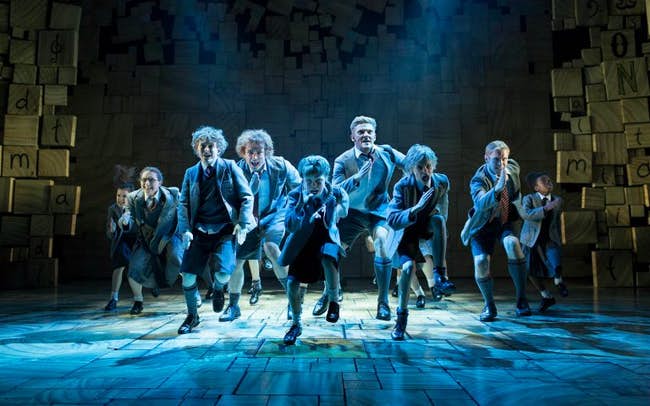 ‘Matilda The Musical’ is based on the world famous children's book, Matilda, by Roald Dahl. Before appearing on West End, the show premiered at the Royal Shakespeare Company’s The Courtyard Theater in Stratford-upon-Avon in 2010. The show was so successful, selling out every show, that within one year it was transferred to London’s West End.

Apart from getting rave reviews from audiences and general viewers, the musical has also sat very well with critics, winning multiple awards on numerous occasions. In 2011 Matilda The Musical won both The Peter Hepple Award for ‘Best Musical’ at The Critics’ Circle Awards and The Ned Sherrin Award for ‘Best Musical’ at the Evening Standard Theatre Awards. In 2012, the production picked up 4 awards at the Whatsonstage.com awards, including the coveted ‘Best New Musical’ award. In the same year, this musical bagged an astounding 7 awards at the Laurence Olivier Awards, securing a place in the Guinness Book of World Records for most number of Laurence Olivier Award wins.

This multi-award winning production follows the story of Matilda Wormwood, an intelligent, young girl who finds her solace in books and stories. She is constantly belittled and abused by those around her, at home and at school. At home, her dimwitted father insists on calling her a boy and reprimands her for reading books instead of watching television. Things do not improve for the poor little girl at school, where she is bullied by the children-hating, outrageous, and downright wicked headmistress, Miss Agatha Trunchbull. However, Matilda soon starts to develop a strong friendship with one of her teachers, Miss Honey, who admires and acknowledges Matilda’s immense intellect, mathematical skills, and imagination. Armed with a sharp mind, magical abilities, and a strong protector, Matilda yearns for a better life and decides to take a stand against the many injustices in her life.

Book Matilda the musical tickets and save £7 on your first booking. Use promo code 'GOLDN'!

There are no steps when enetering the foyer through a double set of swing doors. Entrance into the Stalls section is through the double exit door on Earlham Street.

Transfer seats are available for up to 4 wheelchair users and 2 scooter users. An usher is available to store and bring back the wheelchairs and scooters.

Please note that there is an infra-red system for those hard of hearing, and eight headsets are available in the foyer.

Bar: There are 3 bar areas in the theater serving wine, beer, tea, and coffee. Drinks may be brought to disabled customers in the auditorium.

Cloakroom: There is a cloakroom at the theater. Large items can be checked in for £1 each.

Guide Dogs: Guide dogs are allowed in to the auditorium. Alternatively, staff are happy to dog sit a maximum of four dogs per performance.

Toilets: There are male and female toilets on each level of the theater.

1. Masala Zone Covent Garden: In the mood for Indian? This restaurant serves up some delicious Indian classics including authentic curries, biryanis, and chaat!

4. Hawksmoor Seven Dials: Serving up juicy steaks and seafood, this place makes for a perfect pre-theater destination for meat lovers.

Where is Cambridge Theatre, London located?

What is the seating capacity of Cambridge Theatre, London?

Cambridge Theatre, London has a seating capacity of 1,231.

Yes. Since Cambridge Theatre, London welcomes disabled guests and strives to make the show accessible for everyone, accessible seating is available at the venue.

What are the facilities available at Cambridge Theatre, London?

Bar, wheelchair access, cloakroom, guide dogs and restrooms are some of the facilities available at Cambridge Theatre, London.

Which is the nearest tube station to Cambridge Theatre, London?