About The Theatre
Seating Plan
Aladdin

Designed in 1930 by Edward Stone (also an architect for Piccadilly theatre), and named after Prince Edward (then the Prince of Wales, briefly Edward VIII and later Duke of Windsor), the Prince Edward theatre opened its doors on April 3, 1930 with a performance of the musical Rio Rita. Originally a large draper’s store, this art deco styled theatre was converted to a dance and cabaret hall, being renamed the "London Casino", and renamed again as the "Queensberry All Services Club" in 1942. After the war, where it was badly damaged and lost all of its windows, it became the London Casino once again and in 1954 was converted to a cinema using Cinerama technology from New York, reopening as "Castino Cinerama Theatre".

Eventually in the 1970’s, after the demand for Cinerama died down, the theatre became known as a house for musicals, hosting shows like Evita, Chess, Anything Goes, Crazy For You, Mamma Mia, Mary Poppins and Miss Saigon. Having renovated the theatre for nearly three million pounds, Delfont Mackintosh Theatres Ltd. continues to renovate the theatre between productions, making the facilities exemplary and one of the most desirable spaces in the West End.

Our Prince Edward Theatre London guide is designed to give you all the information you need to pick the best seats in the theatre. Also, here’s a handy link to the seat availability and real time prices for different seats/dates for Aladdin London on Headout. 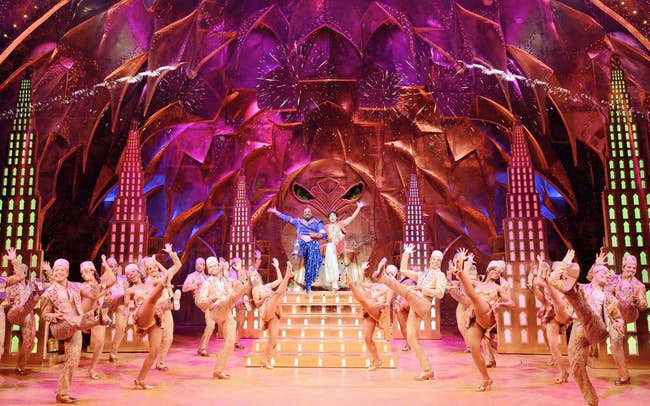 Aladdin: The Musical was adapted from the famous Disney movie, that eventually became a Tony Award-winning Broadway musical. It was brought to West End by the producer of The Lion King, featuring all the songs from the Academy Award-winning score, together with new music written for this production. Directed and choreographed by Casey Nicholaw (The Book of Mormon, Something Rotten), the show stays true to the 1991 hit animated film, and tells the tale of the street Aladdin and his love for the Princess Jasmine. The lead roles of Aladdin and Jasmine are being played by rising British stars Matthew Croke (Singin' in the Rain:UK Tour) and Jade Ewen (In the Heights). Broadway’s Trevor Dion Nicholas has made his London stage debut as the Genie. Breathtaking sets, mind-blowing special effects, over 350 lavish costumes sparkling with over two million Swarovski crystals and a fabulous cast and orchestra bring the magic of Disney’s Aladdin to life on the West End stage.

Set in town of Agrabah, Princess Jasmine feels trapped by her father’s desire to find her a royal groom. Meanwhile, the Sultan’s right-hand man, Jafar, is plotting to take over the throne. When Jasmine sneaks out of the palace in disguise, she meets Aladdin, a charming street urchin and reformed thief. After being discovered together, Aladdin is sentenced to death, but Jafar saves him by ordering him to fetch a lamp from the Cave of Wonders. And lo and behold, the mysterious and powerful Genie appears. Will Aladdin’s new identity as “Prince Ali” help him win Jasmine’s heart and thwart Jafar’s evil plans? Will the Genie’s wish for freedom ever come true?

Please Note: This production contains theatrical smoke and fog effects, pyrotechnics, strobe lighting and loud noises with an auditorium blackout of 8 seconds around 45 minutes into the performance.

Book Aladdin tickets and save £7 on your first booking. Use promo code 'GOLDN'!

Disabled access is available through the entrance to the auditorium through a double EXIT door opening outwards on Greek Street, then up a very short ramp to Box 1 where there are 2 spaces for wheelchair users and 2 companions.

Transfer seating is available to row A. The theatre is able to store a maximum of 2 wheelchairs and one scooter per performance, next to the EXIT door.

Assistive Listening System: Headsets are available from the Access attendant for a £5 refundable deposit.

Bar: There are 5 licensed bars, and staff are also happy to bring drinks to disabled customers.

Cloakroom: Large items cannot be stored in the cloakroom – the staff will be happy to help you find a suitable storage solution elsewhere in the city.

Guide Dogs: Guide dogs are allowed in to the auditorium. Alternatively, staff are happy to dog sit.

Other: There are special visual tools and social stories available for download for people with autism, who may find social situations difficult.

Toilets: There are Men’s and Women’s toilets on all levels, and Adapted toilets on right-hand side of foyer.

3. Bar Italia: Bar Italia is a near 24-hour traditional Italian cafe in the heart of Soho with a continental feel and a great atmosphere.

4. Café Boheme: Owned by Nick 'Soho House' Jones, Café Boheme is open 7:30 AM - 3 AM weekdays, so it's open for breakfast, lunch, and a late night dinner or drink.

4. L'Escargot: L’Escargot is Marco Pierre White’s famous restaurant, and was the first establishment in London to serve fresh snails.