The Colosseum Arena: An Ancient Stage Of Barbaric Gladiator Games

The Roman Colosseum is the largest standing ancient amphitheater and has been named one of the New 7 Wonders of the World in the year 2000. The Colosseum Arena was a stage of combat for the gladiators and occasionally staged mock naval battles. Its 80,000 seat stadium inspired the gladiators, who were mostly slaves, criminals, or prisoners of war, to fight for their freedom. The horrors of the blood-thirsty crowd of thousands cheering on the gladiators’ fight for their lives leaves it to our imagination what entertainment meant to the ancient Romans.

So, I’m going to get to the bottom of all things Colosseum and decode everything engrossing about the Colosseum Arena and you can decide if it is truly worth the hype.

What Is The Colosseum Arena? 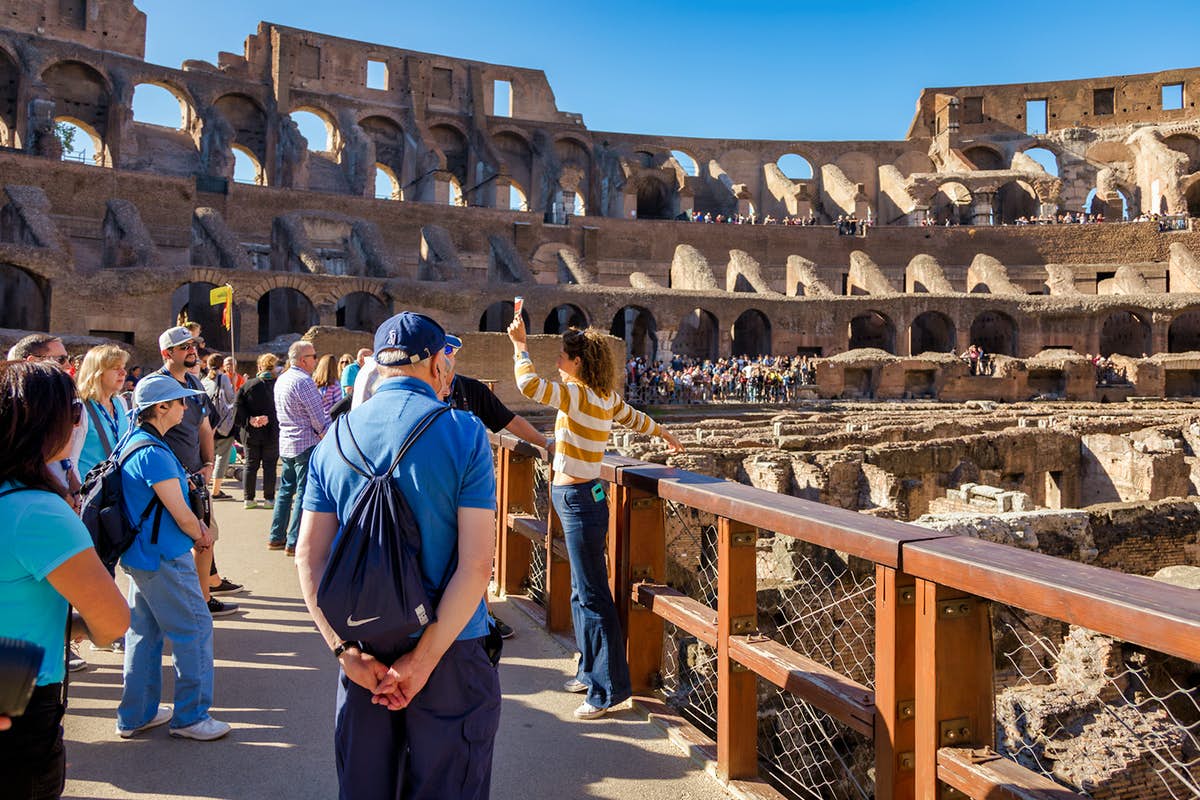 The Colosseum was originally a Flavian amphitheater built to stage combat. Previously, on the site of the Colosseum stood a private lake built by Emperor Nero. His successor, Emperor Vespasian drowned the lake and built the mighty Colosseum on the site as a gift to the Rom"an people.

The Colosseum Arena on which the gladiator games and the mock battles used to take place was a wooden floor layered with sand. Around two thousand years ago, 80,000 spectators would gather around the Colosseum Arena and witness gladiators fight to their deaths, or on rare occasions, against wild beasts such as tigers or lions. It showcased the original man versus wild, as emperors, senators, and intellectuals cheered on.

If you are looking to learn more about the Colosseum Arena, you’re in luck. There are Colosseum tickets that give you a deep insight into the making and the remains of the Arena, the hypogeum, and the gladiators’ backstage entrances. You will also be able to use the same entrance used by the gladiators for this tour, which is not accessible by those with general tickets.

Are Skip-the-Line Colosseum Tickets Really Worth The Money?

What Was The Colosseum Arena Used For?

The Colosseum Arena served as a wildcard to freedom for gladiators. It provided them with hope for freedom, should they become the best gladiator on the floor. They fought each other till death and sometimes to wild animals that were caged below the Arena. The battle floor is connected to the Ludi, a school where the best gladiators were taught to fight. Only one such Ludus called Ludus Magnus stands today which is located close to the Colosseum and can be accessed with a tour of its own.

It is believed that the gladiator games started as a funeral ritual of the Nobel. The games were heavily funded by the wealthy and powerful to entertain the common man and gain their support at the cost of the gladiator souls. On its opening in 80 AD, Emperor Titus himself funded one hundred straight days of games. This brutal practice was put to an end by Constantine in 325 CE since he believed in civil and domestic peace.

Under The Colosseum Arena

Arena in Etruscan, the language of ancient people of Etruria, means Sand. It is named after the sand on which the gladiators fought. Although I could not see the surface of the sand, I could see the levels beneath it. The underground passageways are covered with a wooden floor called hypogeum, which is absent now. The walls of the underground make up the two-storey labyrinth. It connects the rooms of the gladiators, the chambers of exotic animals to the main floor stage. Complex machines were used to move the animals to the Arena floor from the cages and the manual work was done by the slaves and prisoners of war.

Natural disasters, in particular, a series of earthquakes from the 5th century to the 14th century are to be blamed for the destruction of the Colosseum. The best way to experience the remains of it is by taking a Colosseum Underground Tour where a local guide gives you tea about its best-kept secrets.

Things To See In The Colosseum

Along with the Arena, there’s plenty more to explore at the Colosseum. Here are some sections that must be taken notice of on your tour. 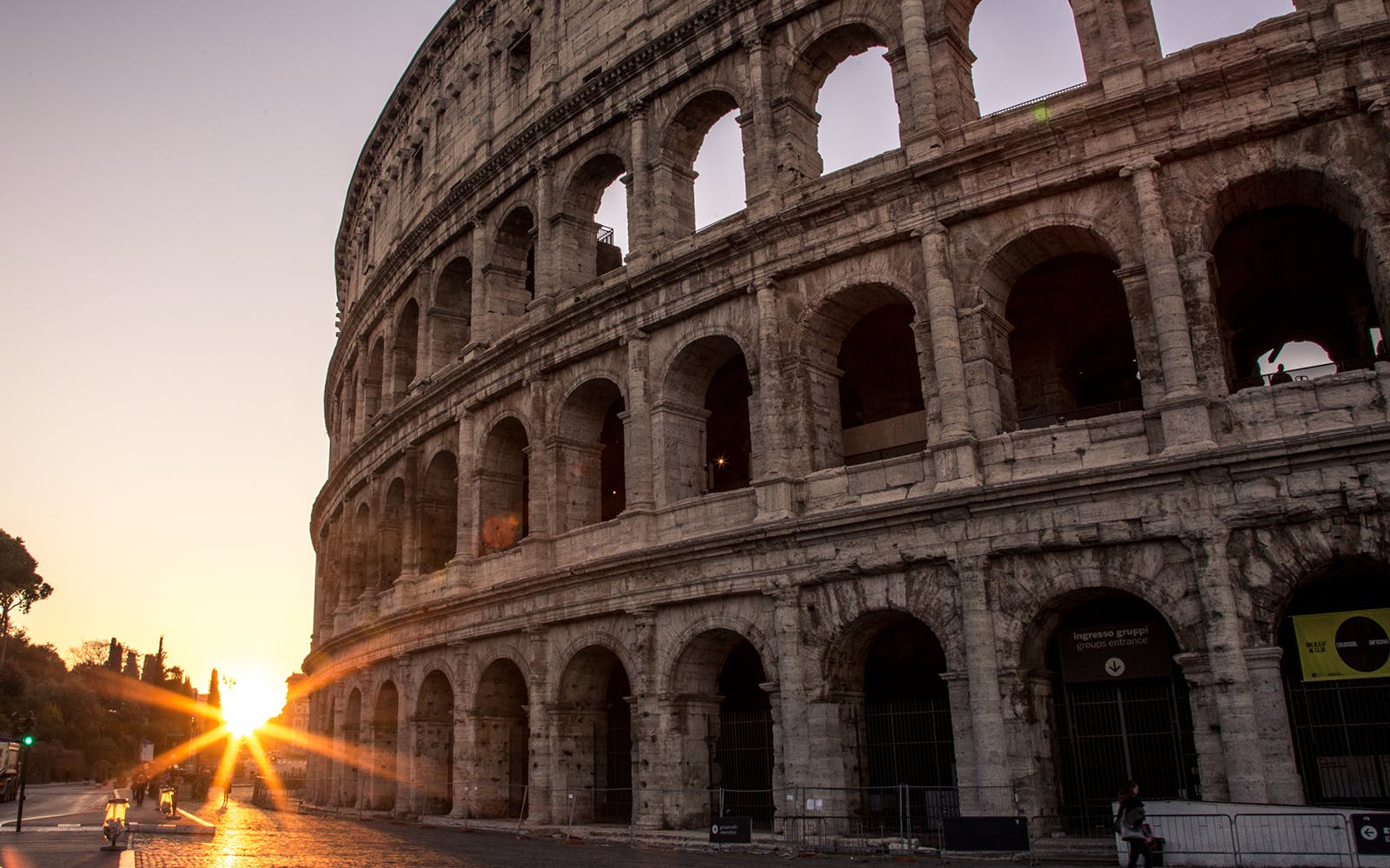 The exteriors of the Colosseum are just as mesmerizing as their interiors. It measures 186 meters in height and 156 meters wide. Travertine limestone, marble, and concrete were used in the construction to lend it the imposing look we can see today. If you want shots of the Colosseum without its broken side, the north of the building offers perfect photo ops. 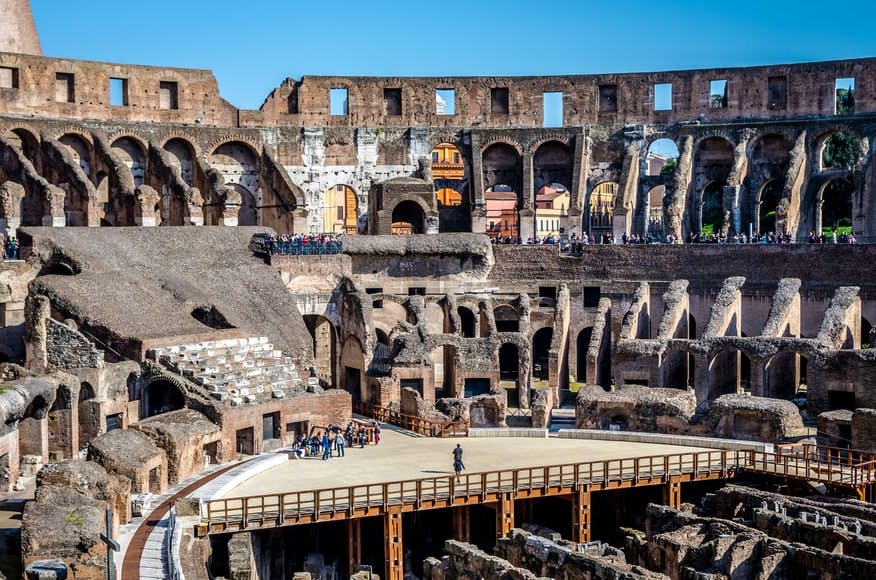 The Emperor’s seat offered a direct view of the Arena, making it the best seat in the house. It is a private box located on the ground level, at the center of the Arena. It is strategically located to not miss a swing during the fight. There are not one, but two of these boxes on either side of the Arena. 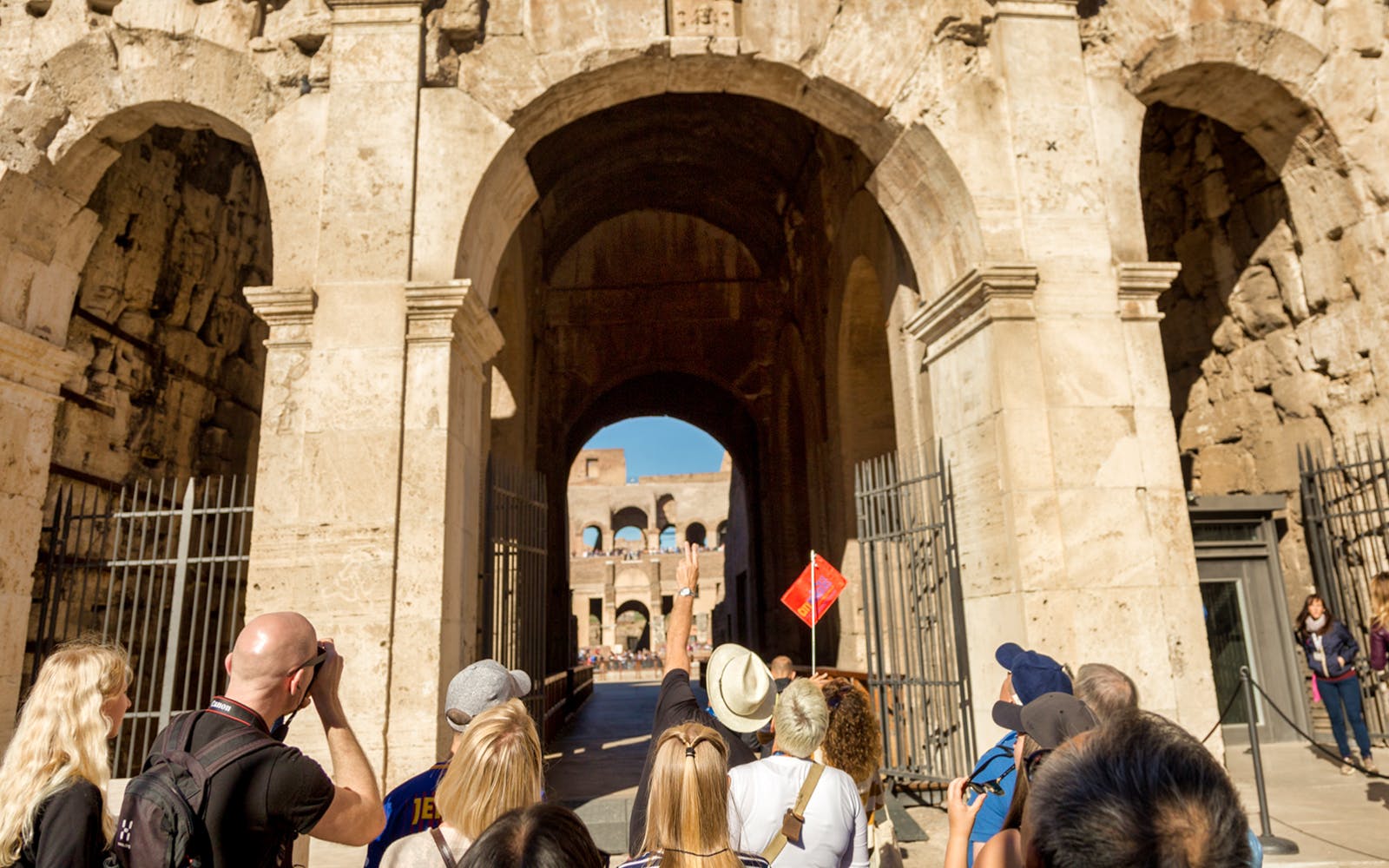 The Gate Of Death

No tour of the Colosseum is complete without a walk through the chilling Gate Of Death which is located on the western side of the structure. Also called Libitinarian Gate, it was through here that the dead and wounded were carried out. The term Libitinarius loosely translates to ‘undertaker’ in Latin.

Use the below map to navigate your way to the Colosseum.

Check out Colosseum Entrances to know all about the different entrances and what best suits your needs.

What is the Arena floor in the Colosseum?

The Arena floor was covered with sand until the 19th-century excavations unearthed the surface, exposing the levels under the floor.

Was the Colosseum a battle Arena?

Yes, the Colosseum Arena was a gladiator combat stage.

What was kept below the Colosseum arena floor?

Wild animals that fought the gladiators were kept in cellars below the Colosseum Arena.

Why did the Colosseum Arena stop being used?

The damage of the earthquakes made the Colosseum unusable.

Can you visit the Colosseum at night?

Yes, you can visit the Colosseum at night.

Are there any guided Colosseum Tours?

Yes, there are many kinds of Colosseum guided tours you can choose from.

How do I skip the line at the Colosseum?

Using skip-the-line Colosseum tickets, you can move pass the long lines and save time.

Do I have to purchase the Colosseum Tickets in advance?

It is recommended that you buy your Colosseum tickets online and in advance to secure the visit for the date and time you are interested in.

Which is the Colosseum entrance?

There were 76 entrance gate arches, however, only the Individual Gate (Sperone Valadier) is open for the public to enter the Colosseum. Learn more about it with our blog on Colosseum entrances.

Check out the top things to do in Rome and plan your vacation like a pro! Don't forget to read our all-inclusive Rome Travel Guide packed with itineraries, local recommendations, hotels, restaurants, offbeat gems, & more.