Explore the Ancient Unknown With These Roman Catacombs Tours

Rome is one of the oldest cities in the world, where history was made, and legends were born. Under this sprawling city is a network of tunnels where the long dead whisper tales of yore. With skeletons and dark narrow alleys, these tunnels are the Catacombs, where the early Christians buried their dead. Today, through a Roman Catacombs tour, we can peek into the past, a period between the 2nd-4th centuries when Rome was transitioning from a Pagan religion to Christianity.

The Roman Catacombs display architectural brilliance; they are carved out volcanic rock, are built for miles at stretch, and lie several feet deep into the ground. The Catacombs are an irreplaceable part of Roman history, revealing early Christian art in the form of frescoes and sculpture. Any traveler seeking to understand the foundation of Rome and Christianity must visit the Roman Catacombs!

Roman Catacombs in a Nutshell 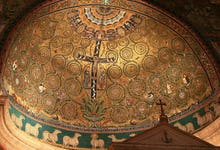 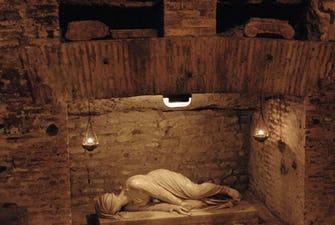 The Roman Catacombs (Catacombe di Roma) are ancient burial grounds under the Eternal City. The Catacombs are of immense historical significance, for both religion and art. While it shows the growth and practices of early Christianity in Ancient Rome, its frescoes and sculptures are of great importance in art history. Similarly, Jewish Catacombs are very important as they help trace Jewish culture between 2-4 century BC. While there are nearly 40 catacombs under Rome, only a few are open to the public.

Why You Should Visit the Roman Catacombs

The Roman Catacombs shed light on a significant period in the history of Christianity. In the early ages, when Christianity wasn’t a major religion in Rome, the burial of the dead was not allowed in the ancient city. To circumvent this, people started building tunnels and catacombs underground on the outskirts of the city to bury their dead. This is why the catacombs are adorned with early Christian art, and use frescos and sculptures to depict their beliefs and customs. Once Christianity became a major religion, the burials underground stopped, and the catacombs were lost to the world.

There are more than 40 catacombs in Rome and were built along the roads leading out of Rome – Via Appia, Via Ostiense, Via Labicana, Via Tiburtina, and Via Nomentana. Today, a few of them are open to public and worth visiting, and are best experienced through guided tours. Catacombs of Priscilla: Often known as the Queen of Catacombs, due to the burial place of two popes and many martyrs, Santa Priscilla has some of the best artwork in all of the Roman Catacombs. It includes the oldest known Marian paintings and also has vivid Biblical scenes from the Old and New Testament.

Catacombs of Domitilla: These catacombs are among the best preserved and most extensive catacombs, with a network that spreads over 17 km. These are the only catacombs with a subterranean Basilica and the bones of the buried. Over 150,000 bodies have found their resting place here among the incredible frescoed walls.

Vigna Randanini Catacombs: Rome has just six known Jewish catacombs, of which only two are open to the public, with the Vigna Randanini being one of them. The Vigna Randanini dates back to the 2nd and 3rd centuries. They offer an insight into Jewish art with their images of Jewish faith.

The Roman Catacombs have an ingenious architectural design, and are carved through soft volcanic rock to build crypts and tombs of commoners and saints alike. Spread across the city, they dive in deep to almost 60 feet underground like the catacombs at San Clemente, and run for almost 17 km like the catacombs at San Castillo. It’s easy to get lost amongst the narrow alleyways of the Catacombs, which is why a guided tour is the perfect way to exploring these Catacombs.

During your tour, you will get a local guide with extensive knowledge of art and history. The guides know the catacombs like the back of their hand, and know exactly where the interesting points are. They will give you nuggets of history at every stop along the way. The Catacombs are rich with vestiges of the burial sites, including skeletons and mummies. You also get to see some incredible well-preserved frescoes. You will need someone to help you understand the significance of these, so the best way is to go on a guided Roman Catacombs tour.

Interesting Facts About the Roman Catacombs Seeing and knowing the history of underground Rome is very interesting. The entrance through Basilica offers a fascinating experience. Catacombs are underground corridors and rooms that used to serve as cemeteries and religious ceremonies of Christians and Jews in antiquity near Via Apia. Most of the bones have been removed to lower levels, but many fresco still remain. Highly recommended!

Friends suggested riding the bus outside the main city a few minutes to void the crowds. Very glad we did. This is less commercial and really allows you to get a feel of how things were. We learned a great deal about the time period and enjoyed the tour. The guide shared many interesting things about the catacombs, the church during that period and more. It was an easy ride on the city bus and a short walk. No need to book an excursion, making this an inexpensive but worthwhile visit.

What was the purpose of the Roman catacombs?

The Catacombs of Rome are former underground burial grounds that date from the second to the fifth century and were principally used by Christians and Jews. The catacombs are subterranean passageways that were used as place of burial for a number of centuries.

Why did Romans bury their dead in catacombs?

For this reason all the catacombs were located outside the walls of the city. These places were a shelter apart and hidden underground where Christians could burial their own, using freely Christian symbols.

Are the Roman catacombs worth seeing?

The catacombs are an amazing opportunity to learn about parts of the city's history you might not otherwise come across. Popes were buried in the Roman catacombs, and early Christians took tables and benches down to the tunnels as the religion outgrew home-worship. Rome's catacombs are some of the oldest in the world.

How many bodies are in the Roman catacombs?

The Paris Catacombs is home to an estimated 7 million skeletons and they are very visible today. In Rome, you may see a skeleton under glass but most of the tombs had been cleared out a long time ago

Why did Christians build catacombs?

At first, the catacombs were merely burial places; places where Christians could meet to perform funeral rites and celebrate the anniversaries of the martyrs and the dead. During the persecutions for the third century, Christians used the catacombs as places of momentary refuge for the celebration of the Eucharist.

Did Christians hide in the Catacombs of Rome?

How cold are the catacombs?

The temperature underground in the Catacombs is about 57° F (14° C), much cooler than Paris in summer.

Is there a dress code for the catacombs?

Find out what the dress code is before you go on a Catacombs of Rome tour. For example, tourists entering the Vatican Necropolis and St Peter's Basilica must have covered shoulders. In addition, men should wear long pants and women long pants or dresses the reach below the knee.