New York, New York, it really is one helluva town! This year, choose to spend your New Year’s Eve at Times Square and watch the renowned crystal ball drop 140ft from the top of Times Square. What started as a tradition in 1904 has now transformed into an international phenomenon with New Year’s Eve performances from consummate artists like Frank Sinatra, Queen and more recently, Lady Gaga and Charlie Puth, to an electric fireworks display that lights up the Manhattan skyline. The New Year’s Eve Times at Square Ball Drop creates memories for a lifetime.

The adrenaline-charged excitement of the Ball Drop garners attention from thousands across the world. It marked the inauguration of the New York Times’ new headquarters back in the day which continued to snowball into an unparalleled celebration of days old and new. The New Year’s Eve celebrations have rallied through the two world wars and intense security checks following multiple bomb scares. But, as the clock strikes 12, the ball whooshes down to ring in the new year in a flourish that is forever imprinted in your mind like an old photograph.

Why is Times Square worth the hype? 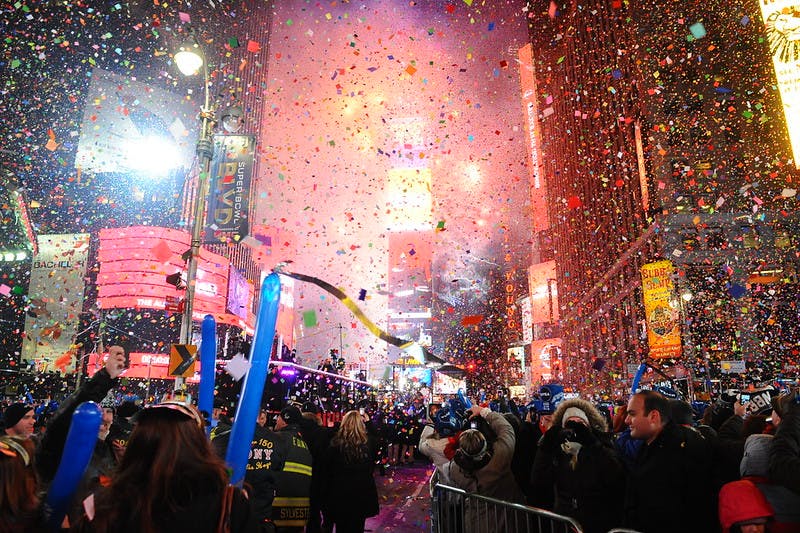 If it is in New York, it is worth your attention. Times Square is the perfect place to spend your New Year’s Eve as it is the melting pot of the world where people from all walks of life gather uninhibited and unencumbered. Many dance and sing along to the familiar tunes and the atmosphere is simply electric. The fireworks light up the sky at midnight as the music blasts from the speakers. Spend time getting to know the people in your vicinity, with whom you will be spending hours waiting for the ball to drop.

It is recommended to head to the Times Square New Year’s Eve celebrations early in the day and pick the best viewing spots. The top of the Empire State Building is a highly-recommended spot for a bird’s eye-view. The ‘Bowtie’ is another highly-coveted viewing point at the intersection of Broadway and 7th Avenue to watch the ball drop at midnight. A great way to circumvent the crowds and find a comfortable vantage point is to get the NYC Explorer Pass or the New York Unlimited Attraction Pass to gain express entry into places such as the Empire State Building and Rockefeller Center for skyline views and front-row seats to the ball drop with a cocktail in hand. 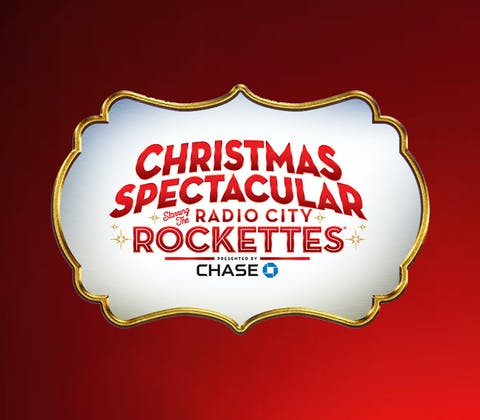 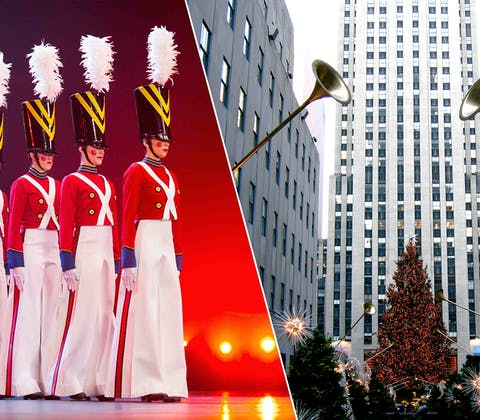 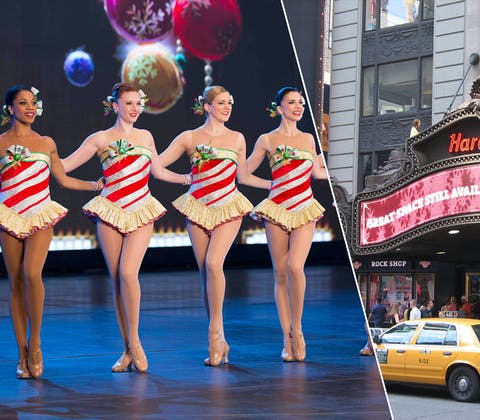 A New Year’s Eve Cruise on the Hudson River sounds almost magical and it truly is. As the Manhattan skyline is illuminated by an iridescent array of bright lights, enjoy a boat cruise across the Hudson with the New Year’s Eve Circle Line Cruise or a Dinner Cruise with pop music and an eclectic crowd.

3. Top of The Rock Cocktails and Skyline Vistas from Bar SixtyFive

Bar SixtyFive is on the 65th floor of 30 Rock, the iconic building made famous as the workplace of Liz Lemon in the eponymous American sitcom. The bar offers an unmatched view of the New York Skyline and serves as an excellent vantage point for viewing the New Year’s Eve fireworks while sipping on free-flowing Manhattans.

Dance, dance, dance to the tunes from the 70’s, 80’s and 90’s and boogie your way to the new year. Channel your inner John Travolta and enjoy the ‘throwback cocktails’ at the Retroclubnyc in Times Square, New York for their New Year’s Eve Dance Party 2021. Top DJs spin blasts from the past for an enthralling time.

One of the most sought-after New Year’s Eve Parties in New York is at the popular dance club Copacabana with dance tunes courtesy of international DJs. Enjoy the drinks, food and good vibes with everyone basking in the festive glow and have a memorable time with friends and loved ones.

How to Get to Times Square

The public viewing places to watch the New Year’s Eve Ball Drop in Times Square, such as 44th Street & Broadway, fill up as early as 3:00 PM in the afternoon and it is recommended that visitors find a suitable spot early in the day. There are multiple ways to get to Times Square and the best is via public transportation.

Shuttle Trains and buses are the most convenient methods but make note that certain exits such as the 42nd Street Subway Station are overcrowded so it is better to disembark at an earlier stop to avoid diversion.

Entry points for the viewing include access from south of 41st street and north of 43rd street, among others. Check the official Times Square website for a detailed map of where and how to enter Times Square on New Year’s Eve.

There are multiple events taking place in New York on New Year’s Eve and you can avail taxi services from sources such as Taxi Leader, NYC Limousine and the iconic yellow cabs to get around town. This is the time to use an NYC Explorer Pass to skip the long lines and enjoy the benefit of swift entry to many of New York’s major attractions.

Get yourself a New York Subway Pass to navigate the metro system or sign-up for a Hop On Hop Off sightseeing tour for an NYC tour. There are many guided tours offered to travelers including walking, cycling and bus tours by Free Tours by Foot for an immersive introduction to the city. 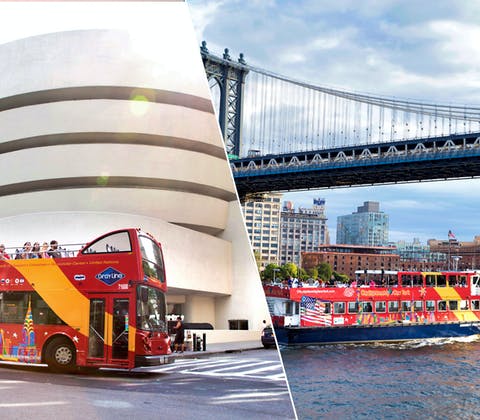 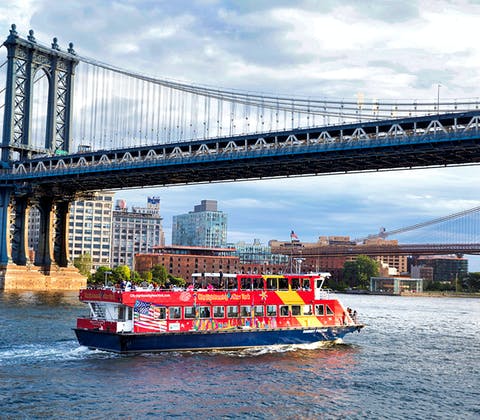 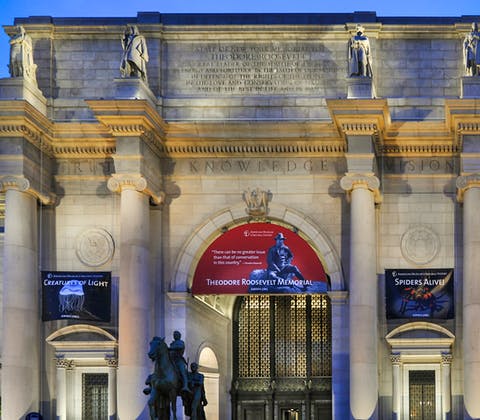 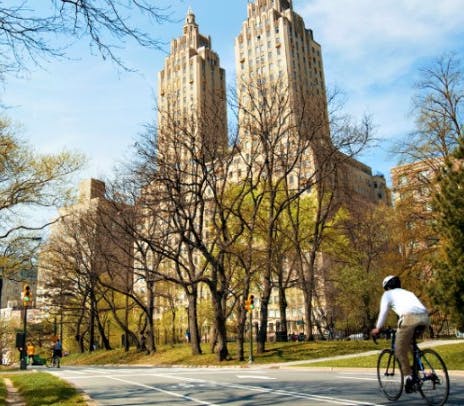 Where to Stay in New York during New Year’s Eve 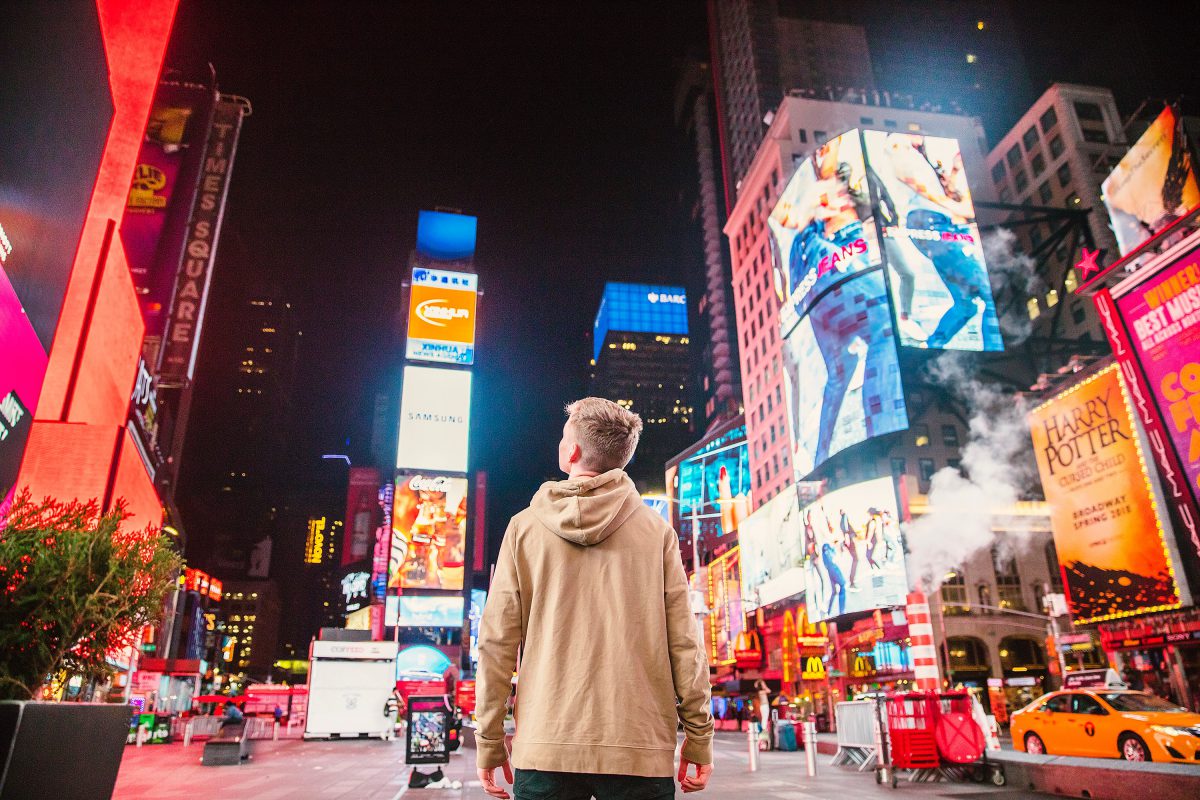 Accessible from the subway and only a two-minute walk to Times Square, Premier New York Times Square by Millennium Group is a coveted hotel for its location and modern comforts. The lounge is free for use and you can watch the New Year’s Ball Drop straight from this boutique hotel.

A high-rise hotel at a five-minutes’ walk from Times Square-42nd Street subway station, Hyatt Centric offers stunning views of the New York City skyline from its terrace. You can gaze at the fireworks illuminating the sky at midnight right from your bedroom!

A tribute to tradition and the yesteryears, Casablanca Hotel is designed with warm, wooden interiors. The hotel is located within walking distance from Times Square in the Theater District.

It does not get better than the view from the New York Marriott Marquis found right across from Times Square, home to the NYE Ball Drop. The subway stops and Empire State Building are only minutes away and the revolving restaurant offers the perfect amount of whimsy in the concrete jungle.

Radio City Apartments are only a four-minute walk to Rockefeller Center and Times Square so guests have the option to either visit Bar SixtyFive for drinks and views or head straight to Times Square for the Ball Drop. The services are impeccable and the location is ideal as it is close to many other places of interest like the Museum of Modern Art.

Hilton Times Square is conveniently located on 42nd Street making it even easier for you to navigate the New Year’s Eve crowds. It is a 44-story hotel with breath-taking views of the Manhattan skyline.

Insider Tips for your Trip

Is entry free or are there tickets for the NYE Ball Drop, Times Square?

Entry is free for visitors however, spaces tend to fill up fast so make sure to get there early in the afternoon, well before 3:00 PM.

What are the security measures in place for visitors?

There are plain-clothed NYPD officers everywhere to keep a check on the crowd and diffuse any tension, if at all. No large bags are allowed and you are advised to only carry the bare essentials and strictly no alcohol.

Is the public viewing area in Times Square accessible for the disabled?

Yes, there is a private disabled viewing area at 44th Street and Broadway accessible from 44th and 6th Ave.

How many people attend the New Year’s Eve Ball Drop at Times Square?

Times Square witnesses a gathering of an estimated one million visitors who are all charged up to witness the iconic crystal ball drop.

What is the most convenient way to enter Times Square for the Ball Drop Event?

To avoid the traffic and delays, the best way is via public transportation and you can take the shuttle trains or bus service to get to Times Square. It is advised to check beforehand as some stops may be skipped on the subway line and closest stations like 42nd Street see a diversion of crowds as well.

Is there a covered viewing area to avoid the rain, if any?

No, the entire area is open and visitors are recommended to carry raincoats and hats to avoid the inclement weather. Umbrellas are not allowed and will be confiscated.

Is it possible to watch the Ball Drop from a nearby hotel, restaurant or bar?

Yes, many restaurants and hotel bars in and around Times Square offer New Year’s Eve feasts and ball drop viewing parties. Some of these include Olive Garden, R Lounge, Bubba Gump Shrimp Company and others.

What about the pre-drop show at Times Square?

There are plenty of exciting performances and cultural events that take place from 6:00 PM onwards to energize the crowd waiting for the ball drop. In the past, the line-up saw performances by Robin Thicke, Snoop Dogg and Bebe Rexha, among others.