Things to do in New York Empire State Building

A visit to NYC is incomplete without gorging in the unobstructed panoramic views of the city from the iconic Empire State Building. The sprawling views of Manhattan and the ocean are a feast for the eye and the open-air 86th-floor observatory is the perfect place for you to enjoy it. Soaring 1,454 feet (including antenna) above midtown Manhattan, the Empire State Building is the world's most famous skyscraper. Being one of the top tourist attractions in the country, it is no wonder that America voted for it as America's favorite building (as per a poll conducted by the American Institute of Architects). On a clear day, you can see up to five states from the Observation Decks - New York, New Jersey, Pennsylvania, Connecticut, and Massachusetts.

The Empire State Building in a Nutshell 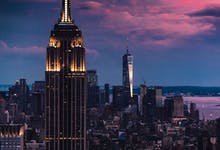 Top attractions you can see from atop the Empire State Building Being one of the most visited buildings in New York City, The Empire State Building draws a large crowd through the year. This results in a wait time of about 45 minutes to 1 hour on an average. Weekends are known to be the busiest period, with waiting times that go up more than an hour, especially weekends during summer.

The best way to escape the tourist hordes is to reach the building early in the morning right after it opens at 8:00 AM, preferably on a weekday; though early weekends are relatively less crowded as well. If you wish to visit the Empire State at night, then visiting after 11:00 PM should also see you in within a few minutes.

Another option is to purchase Skip The Line Tickets in advance and reach there during your desired slot which allows you to glide cross the ticket line and proceed for security check. If you cannot schedule your visit before 9:00 AM or post 11:00 PM, these skip the line tickets are your best bet. During the 1920's New York's economy was booming like never before and builders had just 1 aim - erect the world's largest skyscraper in their city. Their aim was to beat the 40 Wall Street’s Bank of Manhattan building and the Chrysler Building and upon completion, the Empire State Building surpassed its competitors, raising the New York skyline to the highest of heights.

The Empire State Building was designed by William Frederick Lamb who worked at the architectural firm Shreve, Lamb, and Harmon.The design is said to be fairly simple yet exuding grandeur, defined by the budget, time limit and New York City's 1916 zoning law. This minimalist limestone facade building has a classical composition of a five story base, a large tower with setbacks and a monumental spire. It has a total of 102 floors and rises to a height of 1,250 feet and remained the highest structure in the world for 40 years, until 1954. The construction took 2 years, from 1929 and 1931 costing a total of $40,948,900 and once completed, it was was dubbed 'the 8th world wonder'.

The Empire State Building experience is elaborate in all senses: the time taken, duration of visit and the views. Here are the best parts of the ESB you must watch out for.

This part of the ESB was restored in 2009 with Art Deco elements flaunting ceiling murals in 24-karat gold and aluminum leaf which pay homage to the mechanical age, planets and stars. . You will find one of the most famous images in New York City, a depiction of the ESB with beams of light radiating from the mast hung on this Fifth Avenue lobby.This lobby is one of the few interiors in New York to be gifted the stature of a historic landmark by the Landmarks Preservation Commission. This particular exhibit captures the planning and construction phase of the Empire State Building. It chronicles the ESB's history, engineering, construction and pays a tribute to the commendable work of the architects and laborers who helped erect the ESB. While walking around this exhibit, you’ll find original documents including period photographs, architectural drawings, construction jot downs, and other bookkeeping documents. This exhibit showcases the state of the art technology started by the the Empire State Building in 2009 which aims to reduce total energy usage by more than 38 percent energy costs by $4.4 million annually, and carbon emissions by 105,000 metric tons over the next 15 years. While walking around this exhibit, one can understand the processes and working of the technology in a fun and interactive manner, thus appealing to those of all ages. This is the highest open-air observatory in all of New York and offers 360 degree unobstructed views of the Manhattan skyline. It has also served as the setting for tens of thousand movies and television scenes making this one of the most popular parts of the Empire State Building. This Main Deck goes all around the ESB's spire and offers splendid views of the Central Park, Hudson River, the Brooklyn Bridge, Times Square, Statue of Liberty, and plenty more. 16 floors above the Main Deck lies the Top Deck which offers an even better, but enclosed unlike the open air main deck. From here, one can get an aerial view of the Central Park, the laced grid of New York streets and on a clear day you can see beyond the skyscrapers up to 80 miles away. Reaching the Top Deck is equally exciting as one has to ride up on a manually operated Otis elevator which allows you to witness the altitude rise as you ascend. The views from the top of the Empire State Building are breathtaking no matter the time of day. You can't go wrong with the experience no matter when you visit. Whether you're looking over a picturesque sunset or standing in the freezing cold as snow descends onto the city, the Manhattan skyline from the 86th floor observatory is always stunning.

If you're visiting with family
Make your way to the Empire State early in the day to beat the crowd and enjoy more room up top. Anytime between 8:00 AM and 11:00 AM is said to be more peaceful than the rest of the day. If you're traveling with kids or senior citizens, standing in all 3 lines can get hectic, hence these hours are recommended.

If you're visiting with your partner
If you're looking for some intimate time over the Manhattan skyline, visiting the Empire State Building post 11:00 PM is conducive. By this time the crowds would have dwindled and the setting becomes cosier. The views of Manhattan at night, shining like a jewel will rest assured spark romance in the air.

If you're looking to get the best photographs
Without doubt, sunset is when shutterbugs should be on the 86th floor. The amber hues that sweep the sky as the sun sets behind the New York skyline is dream come true for photographers. Tripods are not allowed atop, so photographers are required to make necessary arrangements to get their best clicks.

Know Before You Visit the Empire State Building

While visiting the Empire State Building is a definite on your New York checklist, here are a few things you should know before you buy tickets.

Supercharge your experience with these tips

All You Need To Know About The Metropolitan Museum Of Art
The 10 Best Museums in New York City
Everything You Must Know Before Visting Top Of The Rock, New York
All About The MoMA Entrances | Which MoMA Entrance Should You Choose?
Witness The Pinnacle Of Avant-Garde Art At MoMA New York City | Museum of Modern Art NYC
New Year’s Eve in NYC | Fun Ways to Bring In the New Year