About The Theatre
Seating Plan
Wicked

The Apollo Victoria Theatre London was designed by Ernest Walmsley Lewis in the Art Deco style, giving it a mystical yet cozy feel. Opening as the New Victoria Cinema and variety theatre in 1930, the first film to play here starred George Arlis in Old English. After the last films were shown in 1975, the theatre closed for five years, although Led Zeppelin rehearsed in the theatre in 1980. It reopened in 1981 as the Apollo Victoria Theatre.

The cinema era eventually gave way to musicals, hosting groundbreaking shows like The Sound of Music, Fiddler on the Roof, and Camelot. Bombay Dreams, created by A.R. Rahman, was also shown here, running for 1500 performances. 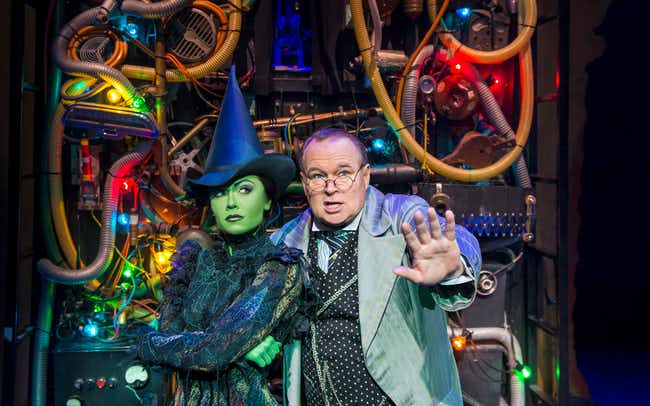 Wicked is a hit American musical based on the 1995 Gregory Maguire novel ‘Wicked: The Life and Times of the Wicked Witch of the West’, an alternative telling of the 1939 film ‘The Wizard of Oz’ and L. Frank Baum's ‘The Wonderful Wizard of Oz’. Wicked premiered on Broadway in 2003 and hasn’t looked back since – with stars like Idina Menzel and Kristin Chenoweth as a part of its cast, and having won 3 Tony awards and 1 Grammy, it was inevitable that the production eventually made its way to the West End. Opening in 2006 at the Apollo Victoria Theatre, the West End production was nominated for four Laurence Olivier Awards. Featuring songs like ‘Defying Gravity, ‘Popular and ‘For Good’, experience the magical re-imagined world of Oz through Glinda, Elphaba, and Fiyero at Shiz University of sorcery.

Wicked tells the tale of the unusual friendship between the blonde and popular Glinda, and misunderstood, strange and green Elphaba, both sorcery students at Shiz University. After meeting The Wonderful Wizard of Oz, the unlikely pair realize that things may not be as they seem in the land of Oz. As Elphaba grows up to become a passionate political activist and eventually, the ‘Wicked Witch of the West’, and Glinda becomes ‘Glinda the Good Witch’, the musical weaves a tale of passion, rivalry over the same love interest, and eventually the downfall of Elphaba. This story of friendship and love reveals the other side to this fantastic magical world.

Book Wicked Musical London tickets and save £7 on your first booking. Use promo code 'GOLDN'!

Access entrance is available at the Vauxhall Bridge Road entrance. A wheelchair lift provides level access to the foyer facilities and an accessible toilet. The Stalls are accessible via steps down from the foyer, with handrails in place. Since there’s no lift to access Stalls, this section is not recommended to those with limited mobility, though it offers excellent legroom.

The Circle, however, does provide access to a wheelchair lift, which gives level access to Row F, where there are 4 wheelchair spaces, extra legroom, and transfer seats. Transfer seats are available throughout the Circle. Accessible seats are Circle F43, Circle F44, Circle F3 and Circle F4.

Bar: There are licensed bars on each level of the Apollo Victoria. The Stalls bar is located to the rear of the Stalls. There is an accessible bar at foyer level. There is also bar on the Circle level, but wheelchair users will need to take a lift to the foyer to reach the bar. The Apollo Victoria Theatre hosts a "happy hour" for cocktails in it's Elixir Bar from 6-7pm each performance evening.

Cloakroom: There is a cloakroom in which large bags and pushchairs can be checked. Prices are £2 for a suitcase or £1 for a bag.

Guide Dogs: Guide dogs and Hearing dogs are welcome at the Theatre. While they are allowed inside the Theatre, you can also leave them with the Front of House team, who will take care of them while you enjoy the show!

Toilets: The Apollo Victoria Theatre has both male and female toilets on each level as well as disabled facilities in the Circle.

1. M Victoria : This restaurant is known for international food, serving everything from sashimi and tartar to delicious-looking (and tasting!) meat cuts from around the world. The head chef, Mike Reid, is not one to be trifled with, having appeared on MasterChef and Great British Menu. Head to this trendy location just four minutes from the theatre!

2. Grand Imperial: Built on the concept of Feng Shui, sample delectable dim sum, soup and dumplings cooked in traditional Cantonese fashion at this opulent restaurant, just five minutes away from the theatre!

3. Boisdale of Belgravia: This cozy, club-style dining room is perfect for an intimate pre-show date. It even has a secret courtyard garden – all this just 600m from the theatre! Be sure to try out the Scottish menu here, which boasts of everything from seafood to juicy steaks before your show.

4. Aster Restaurant: For those who love Scandinavian food, this is the place to be – what with slow cooked partridge with tender Swede, pan-fried bream fillet with pickled fennel and Skyr parfait with quinoa and lemon meringue served here, Aster Restaurant with its elegant ambience isn’t one to miss! Best of all, it’s just a three-minute walk from the Theatre!

5. The Goring Dining Room: With its Michelin Star, this restaurant bedecked in gold-colored upholstery offers the perfect ending to your outing. With exclusive dishes from chef Shay Cooper at a 6-minute walk from the theatre, you simply can’t miss it!

What is the seating capacity of Apollo Victoria Theatre, London?

Apollo Victoria Theatre, London has a seating capacity of 2304.

Yes. Since Apollo Victoria Theatre, London welcomes disabled guests and strives to make the show accessible for everyone, accessible seating is available at the venue.

What are the facilities available at Apollo Victoria Theatre, London?

Assistive Listening System, bar, cloakroom, guide-dogs, and toilets are some of the facilities available at Apollo Victoria Theatre, London.

Has Apollo Victoria Theatre been granted the See it Safely mark by the Society of London Theatre?

Yes, Apollo Victoria Theatre been granted the See it Safely mark by the Society of London Theatre.

How can I reach Apollo Victoria Theatre, London?

Apollo Victoria Theatre is conveniently located near Wilton Road and can be accessed by bus, cab, or tube.

Which is the nearest tube station to Apollo Victoria Theatre, London?