A confluence of all things cultural and intellectual, New York often referred to as ‘The Big Apple’ is a global hub that excites and invigorates. This dynamic city comprises five boroughs: Staten Island, Manhattan, Brooklyn, Queens, and the Bronx interlinked by tunnels, bridges, and ferries. Home to iconic landmarks like Statue of Liberty and Times Square, the New York houses the largest immigrant population in the world and helps one understand the true meaning of international freedom and cultural diversity. New York in April is month of many events combined with lesser crowds and good spring weather, serving as a beautiful time to explore the city.

April heralds the onset of spring in New York. The city experiences four distinct seasons and you will experience sunny days and almost no snow. Although it is one of the wettest seasons, there won’t be more than ten days of slight showers. The average temperature is around 16°C. 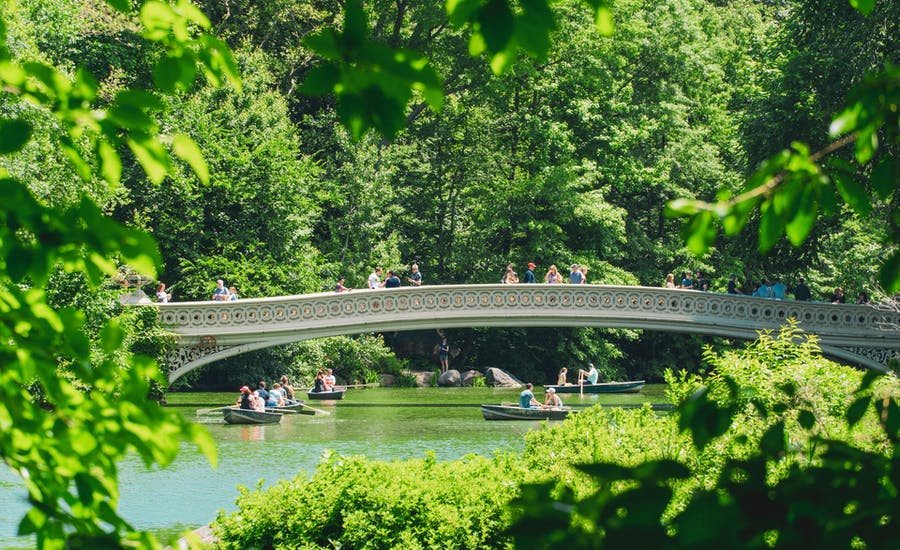 Central Park is the green lung of New York City, and a wonderful place to watch the seasons change in the city. It has exciting attractions like landscaped gardens, zoo and the conservatory garden. In April, the snow melts and the entire park witnesses transformation to a green wonderland. An early morning stroll to breathe in the fresh, crisp air is highly recommended.

New York, NY
USA
Getting There ›

Top of the Rock | Rockefeller Plaza 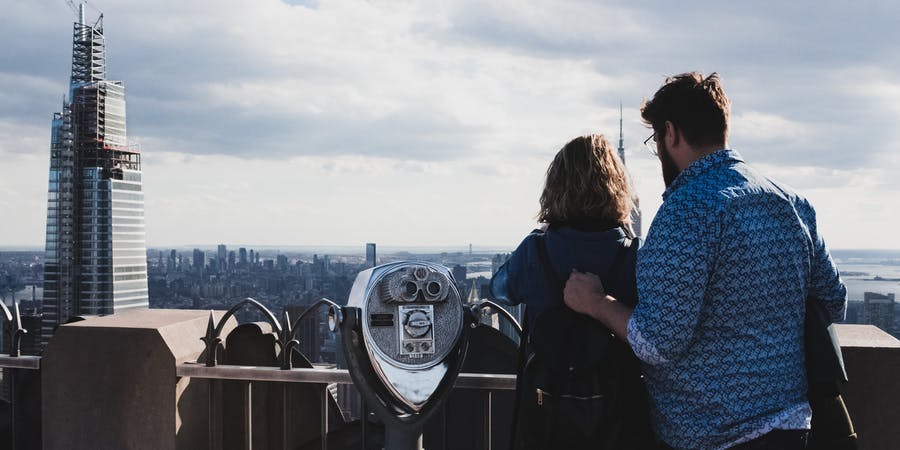 Soak in the fresh greens of Central Park after the overcast wintry months, and watch the sun gleaming over the skyscrapers on the NYC horizon in April. Top of the Rock Observatory Deck, perched on the 67th, 69th, and 70th floors of the Rockefeller Plaza is the best place to do that!

New York's best and latest immersive cultural experience, Summit One Vanderbilt Observation Deck is a blend of all things tech, art, culture, and entertainment like no other. Along with an observation deck, this attraction also has art installations, glass ledges, and exterior glass-floor elevators. Yup, for real. What are you waiting for? This is your chance to take in NYC's view like no other. ESPECIALLY, in April. 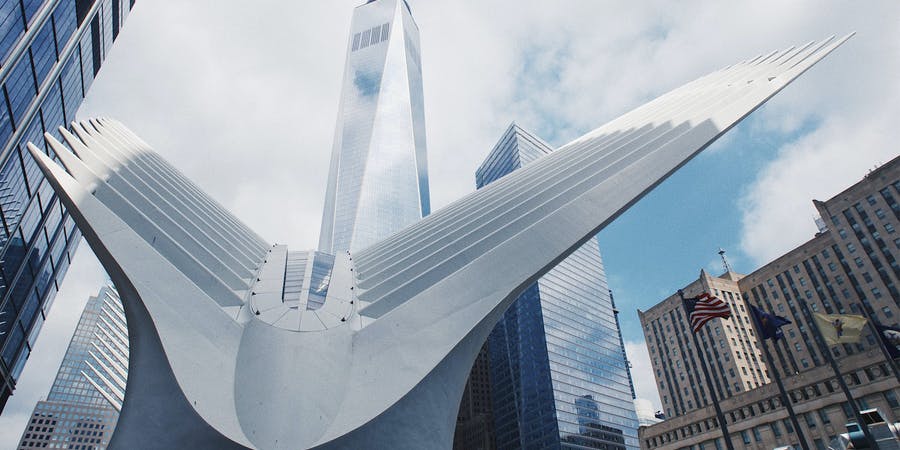 The 9/11 Memorial and Museum is a moving tribute to the victims of the September 11 attack on the World Trade Centre. The twin pools with names of the deceased are a reminder of the loss America experienced, and the museum has a collection of memorabilia from that fateful day. 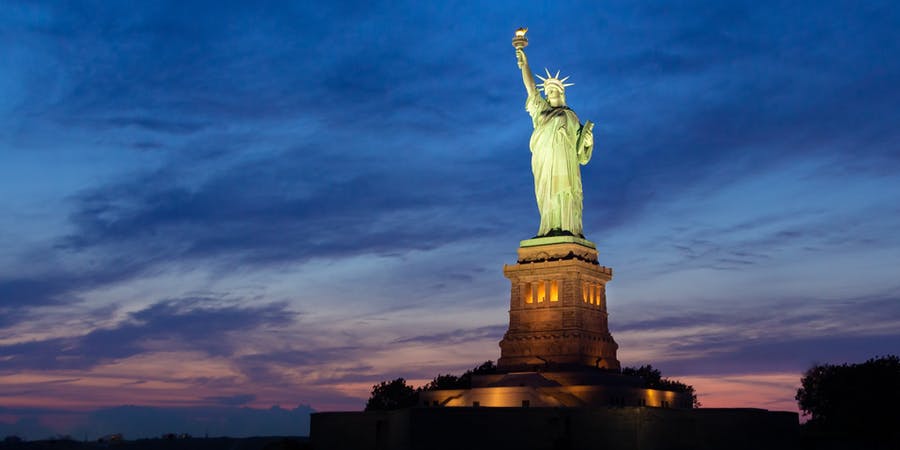 ‘I lift my lamp beside the golden door’, the Lady Liberty is the icon of freedom worldwide and the statue has been standing tall since 1886. A visit to the Statue of Liberty will evoke pride and a tour of the island will give you insight into the significance of the statute. 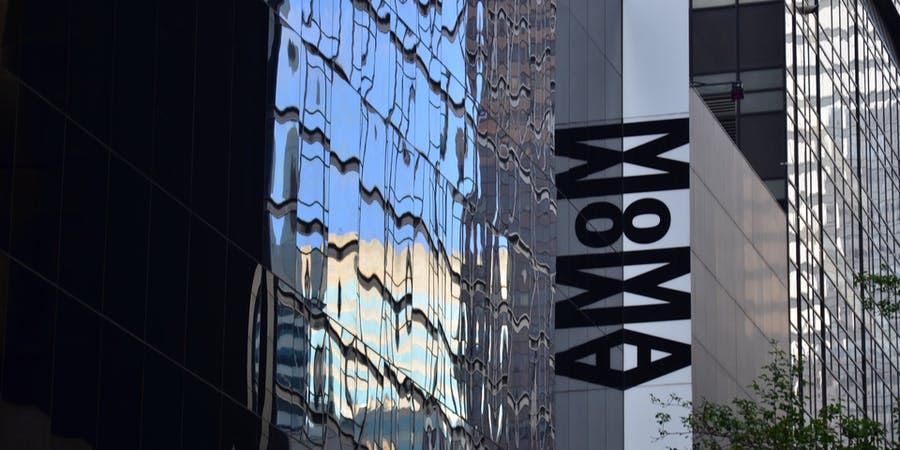 The Museum of Modern Art is one of the world’s leading modern art museums and has a large collection of paintings, sculptures, books on Modernist Art. In April, you can catch a range of exhibitions including ‘The Value of Good Design’, ‘Joan Miro: Birth of the World’ and Lincoln Kirstein’s Modern. 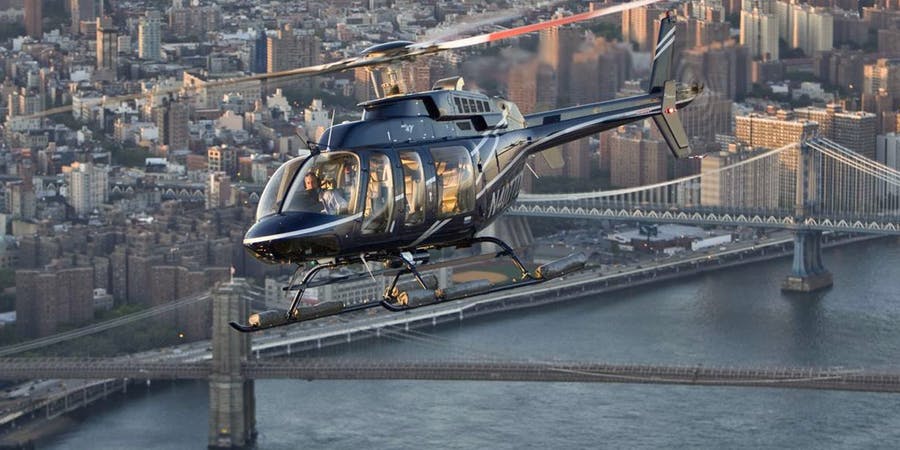 Soaring above the skyline, and identifying iconic NYC landmarks that has been eternalised in numerous Hollywood movies- and a helicopter tour of New York City in a 20 minute helicopter ride. It will be the best 20 minutes of flying of your life and your pilot-guide will give you a live commentary.

Sail the waters of New York City and spot all the landmarks that have shaped the city’s history. Right from the majestic Statue of Liberty, under the Brooklyn Bridge, and past all the five boroughs, this cruise ship takes you everywhere. The warm April weather makes it ideal to be out on water.

New York in April: Events to Look Out For 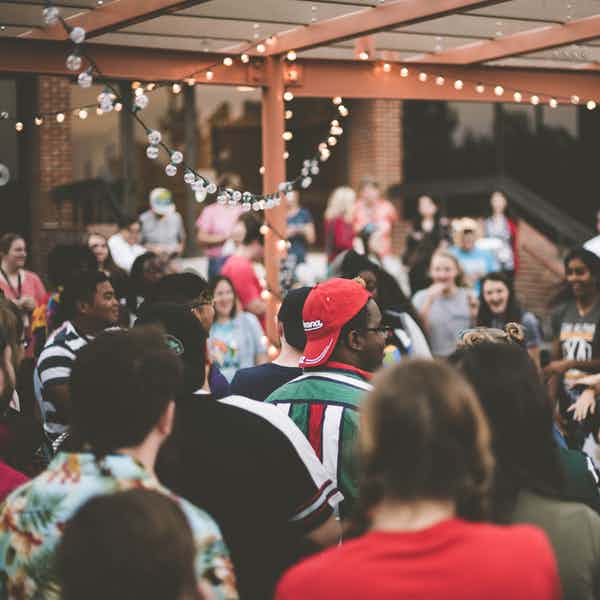 9 April, 2022
Kilts, Bagpipes, and Vikings! Sixth Avenue swells with Scottish pride in a celebration of the Scottish heritage and culture on National Tartan Day. The parade involves dancers, musicians, and performances by artists from across the globe. It is one of the most exuberant and colorful parades in NY.

10 April, 2022
Spring is the season of parades and this year the Greek Independence Day Parade commemorates the 198th year of Greece’s Independence. The parade held at Fifth Avenue brings together the largest gathering of Greek-Americans and involves performances which highlight the Greek culture, right down to traditional costumes! 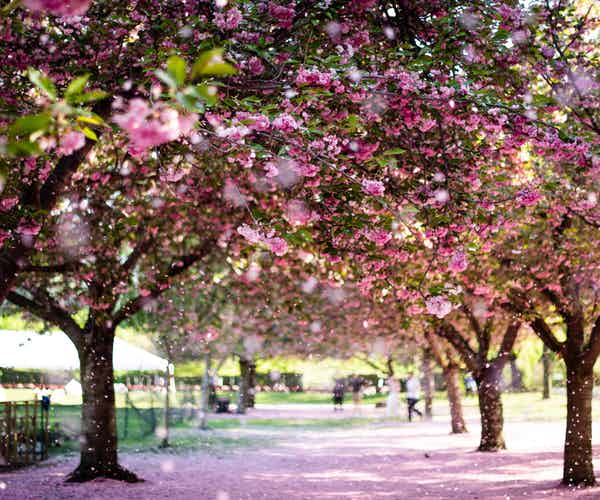 13 February - 28 March, 2021
For 17 years the New York Botanical Gardens have showcased the exquisite beauty of orchids in an annual Orchid Show. This year, they are collaborating with the Singapore Botanical Garden and Gardens by the Bay, to bring thousands of orchids to the Enid A. Haupt Conservatory in an ode to Singapore’s Garden design. 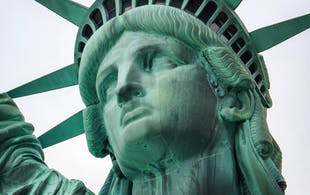 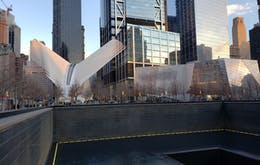 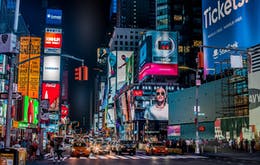 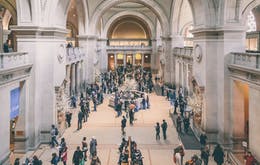 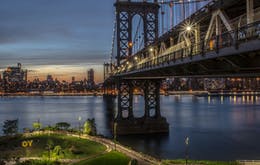 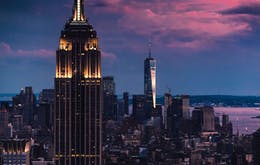 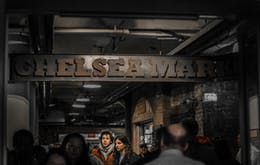 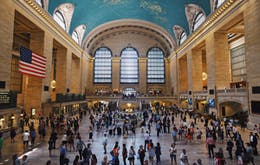 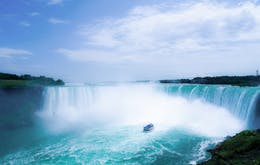 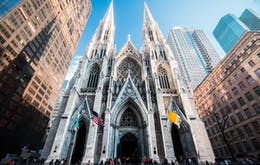 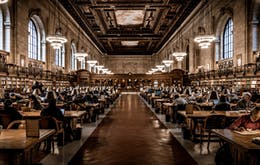 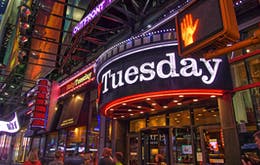 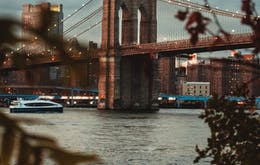 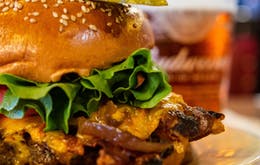 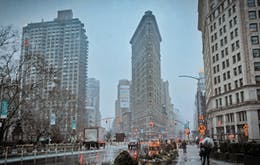 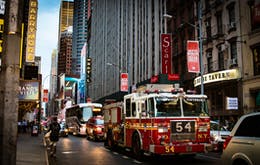 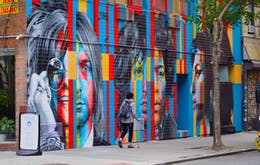 Socket Type A & B

The average temperature ranges around 16°C with daytime highs of 21°C and nighttime lows of 3°C, especially in the first two weeks of April. City experiences almost 12 hours of daylight with sunrise at 6:30 AM and sunset at 6 PM. It is generally sunny with about ten days of rainfall.

New York is an expensive city with a high cost of living all year-round; however the city has a range of accommodation options from five-star hotels to hostels and AirBnBs to cater to all budgets and tastes.

The first half of April is colder and you will need warm clothing including a sweater, woollen scarf, and gloves. If you are visiting over a longer period then its best to pack layers that can be used depending on the weather for the day. Carry an umbrella or a waterproof jacket for the occasional rain. Wear sturdy footwear, it’s all about walking in New York!

Getting Around New York in April

The traffic in New York is legendary and if you want to get somewhere on time then taking the subway and going on foot is your best option. Here are all the options you have in NYC –

Trust a New Yorker to vote for a bagel over a doughnut any day! April is the perfect time to bite into a savoury fresh mozzarella and tomato bagel or even treat yourself to a decadent strawberry cream cheese bagel, stuffed with spring’s best produce.
Where to eat: Absolute Bagels, 2788 Broadway

Just don’t ask for pineapple toppings and you will be fine at any pizza place in New York. The New York style Pizza is unique, and the perfect food to grab on the go, while enjoying the spring season of New York in April.
Where to eat: Lombardi’s Pizza, 32 Spring Street

Ramen – New York is a melting pot of cultures and one of the best dishes you can sample there is the spicy Japanese dish ‘Ramen’. The steaming hot bowl of meaty broth with thin noodles is topped with eggs, and a variety of sauces. Vegetarian options are easy to find too!
Where to eat: Ippudo, 65 4th Avenue 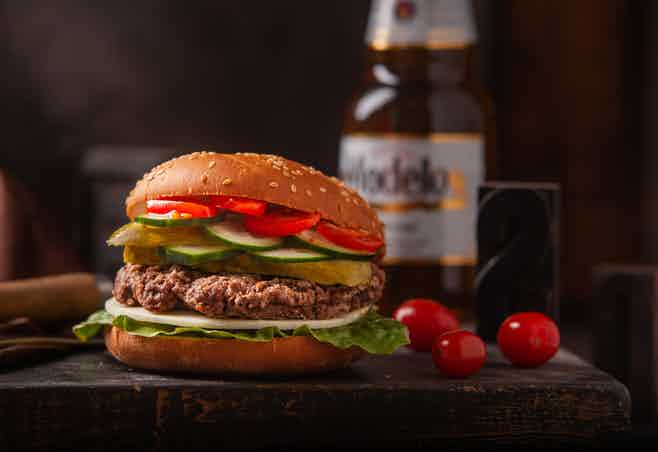 Nothing screams an American classic like the cheeseburger. New Yorkers have taken the burger to the next level and you will find every kind from good ol greasy cheeseburgers to gourmet and artisanal burgers. Digging into a juicy cheeseburger is the perfect end to a spring day in NY!
Where to eat: Bareburger, 3321 31st Avenue 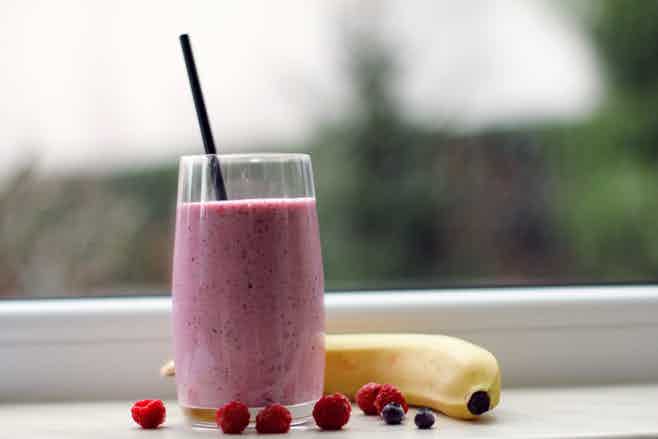 The milkshake has gone from a simple mix of ice cream, milk and fruits to an Instagram-worthy delight of thick shake with outrageous toppings ranging from unicorn-beads to decadent chocolate trimmings. New York has the best pick of milkshakes that will blow up your Insta-post and pant-size at the same time!
Where to drink: Black Tap, 529 Broome Street

Can I travel to USA?

At the moment, all visitors except the nationals of the European Union, Schengen area, the United Kingdom, China, Iran and Brazil can enter the USA. Find out all about the COVID travel restrictions before planning on your next visit.

What are the travel restrictions in New York?

While traveling to New York may be possible, there are a few guidelines you should keep in mind before visiting the city. Here is everything you need to know about the latest New York travel restrictions.

What are the attractions open in New York?

In light of COVID-19, a few attractions in New York have been temporarily suspended until further notice. Find out the live stauts for all experiences through Headout's Global Travel Reopening Tracker.

What are the top things to do in New York in April?

You could visit the iconic Statue of Liberty, or witness the breathtaking expanse of the city from the heights of the Empire State Building. Don’t miss out on April’s unique offerings, like the start of the baseball season, The International Auto Show, or a certain Pillow Fight in Washington Square Park!

What is the temperature in New York in April?

The temperature in New York in April sees highs of 18°C and lows of 7° C. The city experiences three distinct seasons in April and you will experience sunny days but no snow.

What are the best day trips to take from New York in April?

Take a one day trip to bask in nature’s beauty at Niagara Falls. For a break from New York’s fast paced life, visit Philadelphia or Washington D.C. for a walk down the historic lane.

Are any famous attractions closed in New York in April?

On the day of Easter, expect a few early closures around the city.

What is an ideal itinerary for visiting New York in April?

Depending on the number of days you’d like to visit New York, check out our tailor made itineraries for visiting New York in April.

Is April a good time to visit New York?

Yes! From ethnic parades to crazy pillow fights in the middle of Washington State Park, April is the month to witness the cultural diversity of New York. You have annual film and music festivals to choose from, but the lure of the evergreen Broadway always remains.

Discover New York Through The Year