Get Discounts On Betrayal Broadway Tickets!

Things to do in New York Broadway Broadway Show Tickets Get Discounts On Betrayal Broadway Tickets!

The Broadway stage is a coveted space for most actors in the world. This is why many actors even after successful stints on the big screen, return to the Broadway scene. Tom Hiddleston and Charlie Cox have recently had a lasting tryst with fame after being a part of ambitious Netflix and Disney projects. They will be uniting on the Broadway stage to bring to life Harold Pinter’s 1978 play, Betrayal. The play has previously been staged in many countries, including Turkey, Argentina, Israel, Australia, and Hong Kong. Tom Hiddleston last took to the stage as Hamlet in 2017 while Charlie Cox appeared in Incognito in 2016.

Betrayal: About The Show

Harold Pinter’s Betrayal has seen a lot of love from the theatre audience over the last 40 years. It was first adapted for the stage at the National Theatre in London. Since then, it has made its way around the world via written pages and performed scenes. Jamie Lloyd’s version of Betrayal has completed a successful run at West End. This adaptation maintains a duality that Jamie Lloyd is known for. He goes back to the basics by stripping the actors off of the props, forcing them to wring the very last drop of acting out of them. Simultaneously, he brings chic modernity in an already modernist play.

An important element of this adaptation of Betrayal is its clever use of set design. Soutra Gilmour’s set lends a choreographic frenzy to Tom Hiddleston, Charlie Cox, and Zawe Ashton’s coordinated shuffle. Since it is their relationship that remains at the center of the play, the rotating stage assumes a symbolic role throughout the enactment.

The play depicts a seven-year period of marriage between Tom Hiddleston’s Robert and Zawe Ashton’s Emma. The proceedings of the play run in reverse, beginning from Emma’s affair with Charlie Cox’s Jerry, an old friend of Robert. Betrayal is a modern dissection of romantic relationships. On one hand, we witness the events that lead to the illicit liaison between Emma and Jerry. At the same time, we see the breakdown and alienation of Robert from his wife. It is a true testament of Harold Pinter’s dramatic panache. Lloyd’s direction complements this style of his as he keeps the characters superficially unchanged as they labor with their emotional and sexual torment. The same is reflected in Emma’s transition from Robert’s arms to Jerry’s, without really having the heart to break the bitter marital bond. 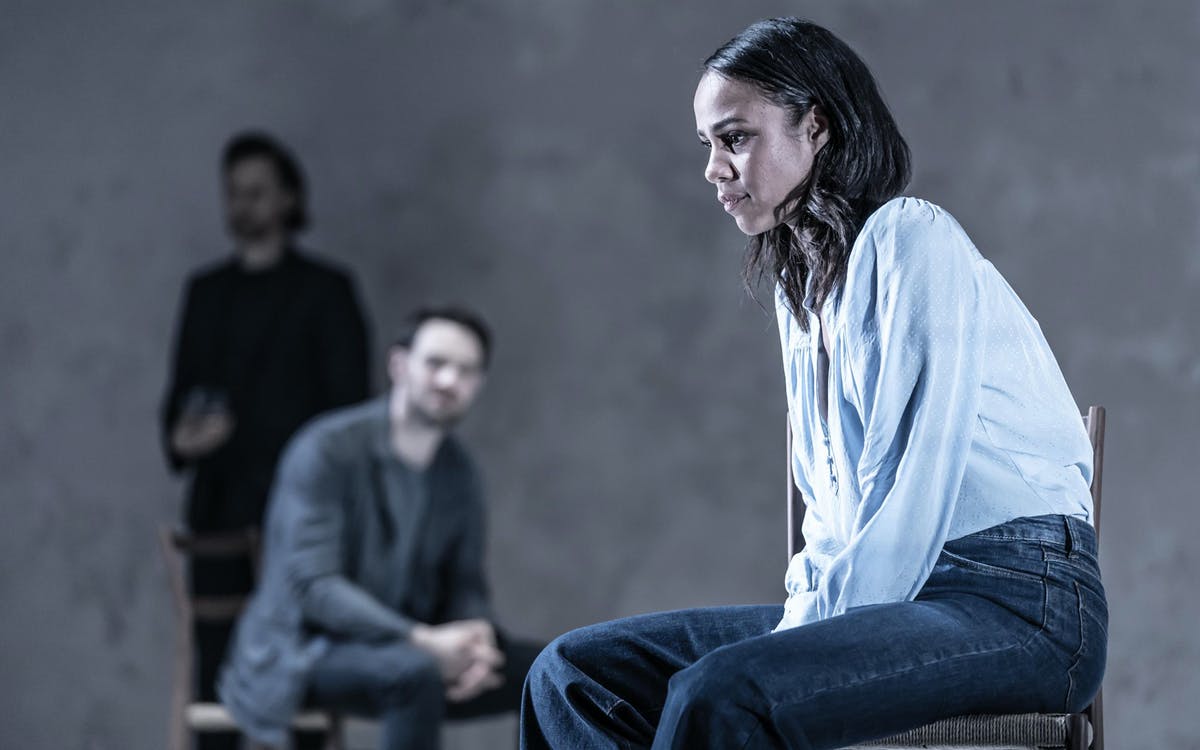 Audience
The show involves sexual themes and depictions. It is, therefore, recommended only for adults. Children under the age of four years will not be admitted.

Seating
The Bernard B. Jacobs Theatre has a seating capacity of 1,078.

Have a look at the real-time seat availability and prices of different sections for Betrayal. In the interactive seat-map, select the date that you would like to watch the show and check out the seats available for that day. You can filter the seats as per your desired price range and purchase tickets directly.

“In the Internet age of sexting scandals and tabloid humiliation, infidelity without public shaming seems almost quaint. So why is Harold Pinter's 1978 play, Betrayal, still such a bristling drama? Its structural brilliance, for one thing, tracking an adulterous triangle in reverse chronology that stretches back nine years and uncovers as many mysteries as it solves.”
- The Hollywood Reporter

“Pared-back and played out on an empty stage, this masterful play becomes not just an aching account of an extramarital affair that eats away at all three people involved, but a glinting meditation on the myriad ways we betray ourselves, and the ways our hearts seem to harden with age.”
- Variety

Note: These reviews are of an earlier version of the show. For more reviews/essential info, click here.

For those looking to book discounted Betrayal Broadway tickets online, platforms like TodayTix and Headout are your best bet, as they source tickets directly from the box office and scour the internet for any discount codes available for these shows. Any price advantages are then passed on ensuring that you are paying the lowest prices.