About the Theatre
Seating Chart

This guide on the Bernard B. Jacobs theatre seating chart will help you find the best seats in the house. Get real-time seat availability and pricing, insider tips on the best seats and more.

The Bernard B Jacobs Theatre has 1078 seats and is structured like most Broadway theatres with two primary sections, the orchestra and the mezzanine. While the seats in the mezzanine section are marked as being in one section, there’s an aisle separating the two. Learn more about the two seating sections of Bernard B Jacobs Theatre with our detailed sectional breakdown. 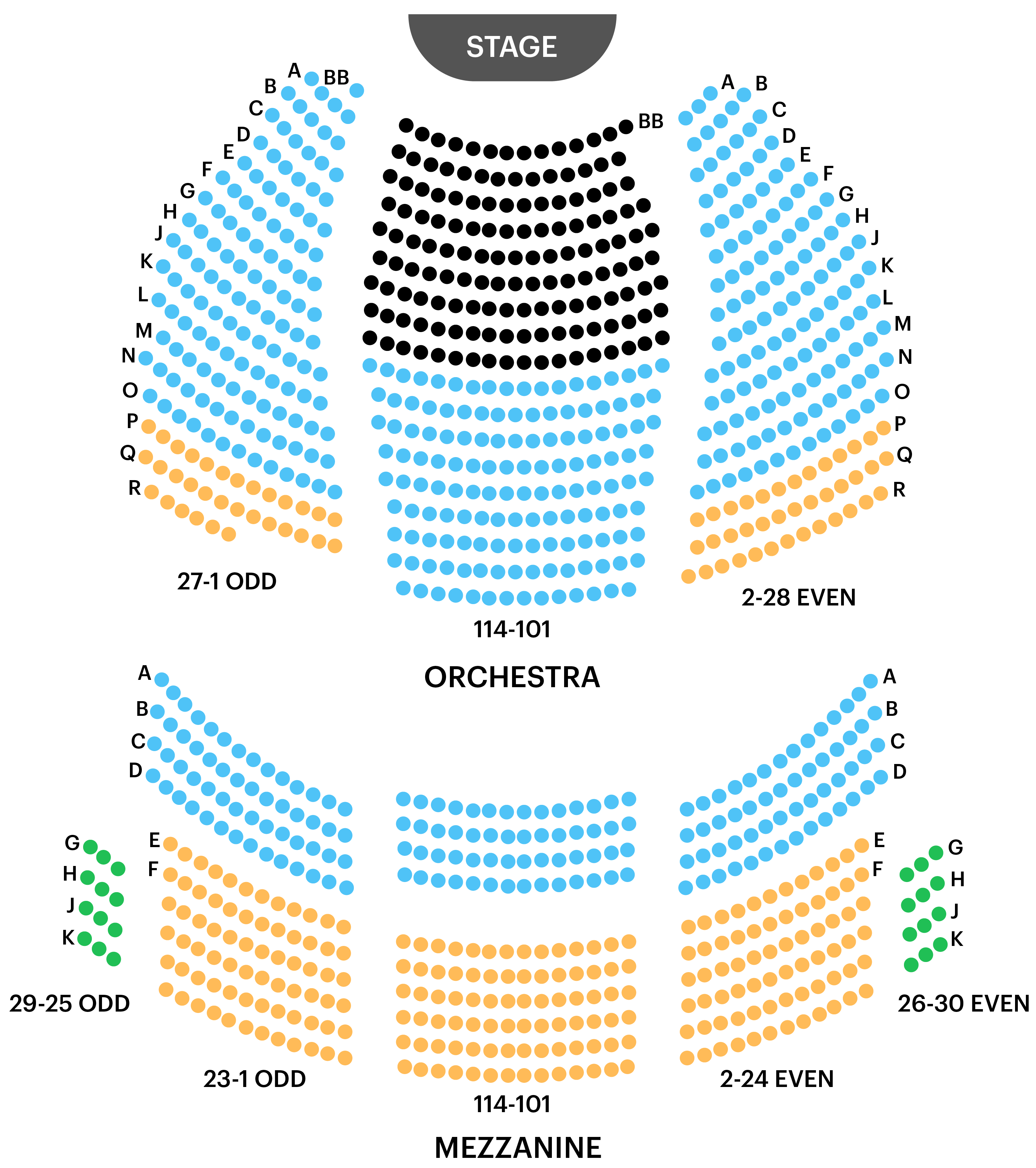 The Bernard B Jacobs Theater orchestra has 19 rows in total starting from AA and ending with R. This section is the biggest in the theatre with 612 seats that are divided into three subsections namely, left orchestra, center orchestra, and right orchestra.

The mezzanine is the only elevated level in the theatre and has 420 seats in total. While considered one section in most seating charts and even the tickets, these seats can be divided into front mezzanine and rear mezzanine since an aisle clearly separates them.

The front mezzanine has 168 seats spread across four rows, A to D, making it the smallest seating section in the theatre. These rows are further divided into three sections, left, center, and right. Given the elevation and lack of obstruction, the seats in this section hold some of the best seats in the theatre, especially in the first couple of rows. The rear mezzanine has 252 seats that are spread across 6 rows in total, starting from E and ending at K. The rear mezzanine section holds some of the cheapest seats in the theatre since it’s the farthest from the stage.

The Ferryman is a intimate drama and to fully experience the show in all its glory, you need seats that are either close to the main stage or offer you a direct look at it. Given that the Bernard B Jacobs Theatre has over 1100 seats, it can be difficult deciding which seats to book. If you want to avoid booking seats that end up being in some corner of the theatre, effectively ruining your Broadway experience, we are here to help. Here’s our handpicked selection of the best seats in Bernard B Jacobs Theatre for you.

The middle seats in the orchestra section in rows BB to C are widely regarded as the best in the house since they are right next to the stage, allowing you to catch the stars performing the play without any disruption. In the mezzanine section, the middle seats in rows A to C are the most popular. These seats offer a great direct look at the stage and the elevation only heightens the view on offer. Since the Bernard B Jacobs Theatre is not massive, the sightlines and acoustics are good from nearly every seats.

While getting good seats for a Broadway show is important, it’s not possible for everyone to spend over $150 on one ticket. This is an issue especially for tourists who have other expenses to think about and other places they have to spend money at. To solution to this problem is value for money seats. These seats are generally pretty good in the view they offer and cost much lesser than your premium seats.

Seats in the middle orchestra rows F-K are pretty decent and cost a lot less than the premium orchestra seats. The last row D in the front mezzanine section is also value for money considering the great view on offer. In the rear mezzanine section, middle seats in the first three rows E to G are quite reasonable for the price of the ticket. Again, since the Bernard B Jacobs Theatre is not the biggest theatre in the Broadway circuit, there is no such thing as a bad seat.

How many sections does Bernard B. Jacobs Theatre have?

Jacobs Theatre has a capacity of 1016 seats. Section capacities are 596 Orchestra and 420 Mezzanine.

Where are the best seats in Bernard B. Jacobs Theatre?

In the mezzanine section, the middle seats in rows A to C are the most popular. These seats offer a great direct look at the stage and the elevation only heightens the view on offer. Since the Bernard B Jacobs Theatre is not massive, the sightlines and acoustics are good from nearly every seats.

What is the seating capacity of Bernard B. Jacobs Theatre, New York?

Bernard B. Jacobs Theatre has a seating capacity of 1,078.

Which section has wheelchair accessibility at Bernard B. Jacobs Theatre?

The Bernard B. Jacobs Theatre is accessible step-free from street level to the lobby and Orchestra at 242 West 45th Street. All wheelchair spaces and companion seats are in rows I, J, P and R of the Orchestra, which is completely step-free. There are also transfer seats across this section.