The Rembrandt House Museum Guide | All You Need to Know

Things to do in Amsterdam The Rembrandt House Museum

Your trip to Amsterdam is incomplete without a stop at the Rembrandt House Museum. This historic art museum in Amsterdam was legendary painter Rembrandt Harmenszoon van Rijn's home and studio from 1639 to 1656. Around 100 years ago, the building was converted into a museum dedicated to showcasing Rembrandt's art. The former residence of iconic Rembrandt van Rijn allows for an interesting peek at his paintings, etchings and sketches, along with the painter's personal possessions, including his collection of weaponry and seashells.

The history associated with the Rembrandt House Museum is as tragic as it's interesting. Built in 1607, the house occupied a hipster area of settlement of rich artists and merchants, presently known as Jodenbreestraat. Rembrandt purchased the house in 1639 after marrying Saskia van Uylenburgh and lived in it until 1656, when he went bankrupt.

Over the course of his almost 20-year long stay in the house, Rembrandt created some of his best work, including the legendary ‘The Nightwatch’. In 1911, as a result of the Dutch movement, the Rembrandt house was converted into a museum to honor the revered artist and also showcase 17th century Dutch architecture. If you're in Amsterdam for a day, make your way to Rembrandt House Museum to spend for an enlightened couple of hours discovering the legendary artist's home and art.

Navigate Your Trip to the Rembrandt House Museum

What to Expect at the Rembrandt House Museum 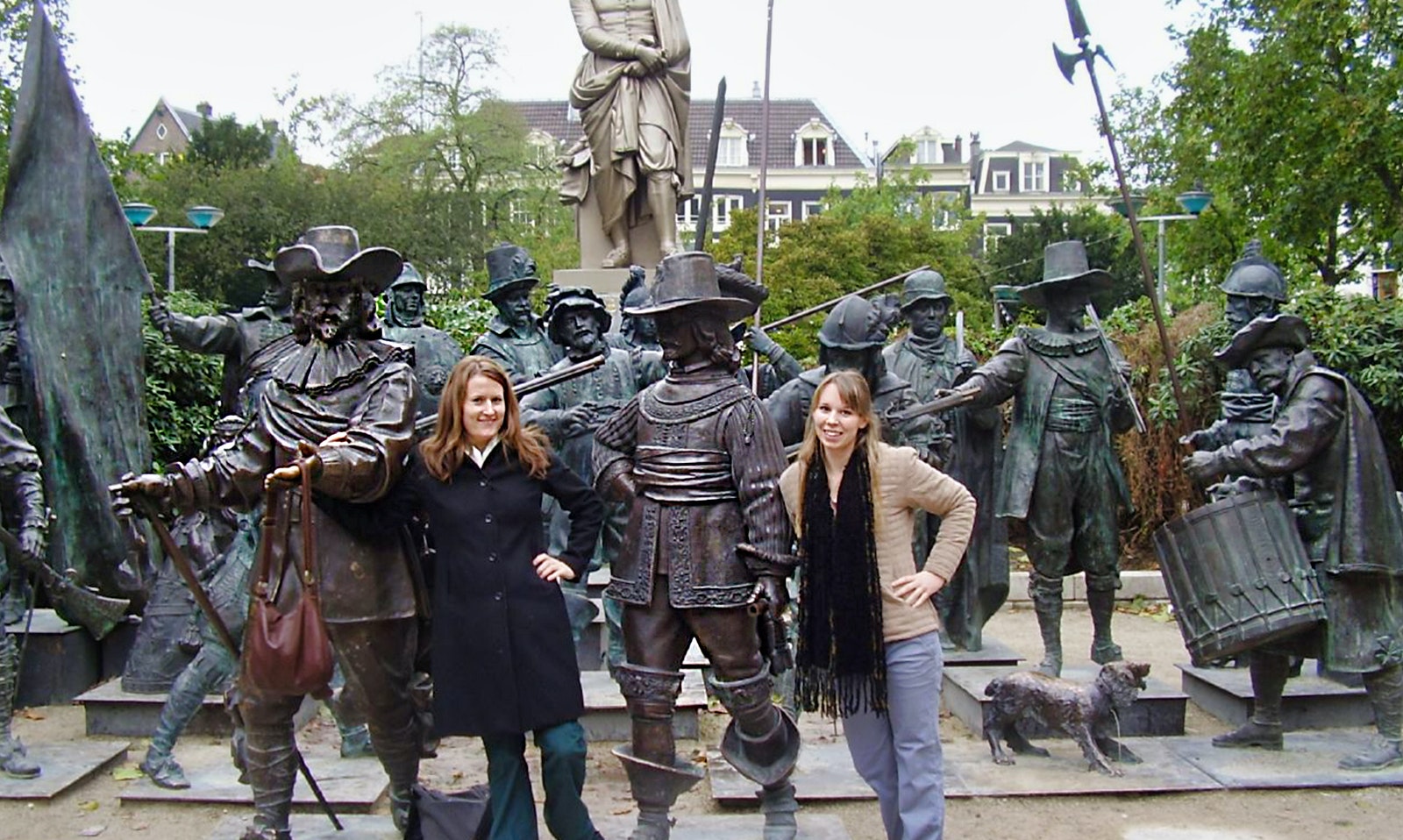 Originally his primary residence and art studio, Rembrandt House Museum became a public shrine to the artist in 1911. The house was converted into a museum to showcase Rembrandt's rare paintings, sketches and his personal memorabilia. The museum offers a complete overview of Rembrandt's work, including 260 of the 290 etchings he made. The museum also houses a small number of paintings by Rembrandt's teacher, pupils and even contemporaries. Apart from the art work, the museum has been tastefully decorated with furniture, objects and decor from the 17th century.

In 2017, two undiscovered paintings from Rembrandt's collection were added to the museum. These paintings, ‘Portrait of Petronella Buys’ and ‘Man with Sword’, were initially thought to have been painted by one of Rembrandt's assistants or students but now they are considered more of 'rush job' by Rembrandt. Apart from viewing the works of art by Rembrandt and Pre-Rembrandt artists, you can also participate in two very special activities at the museum.

First, you can learn how to sketch and paint just like Rembrandt at a live painting demonstration which is organised daily at the museum. Second, you can visit the Laboratory Rembrandt exhibit. Here, you can get a fascinating peek at how historians and scientists employ advanced technology to minutely examine Rembrandt's work and reveal hard to find details, things the naked eye would never catch. Visit Rembrandt House Museum for a fascinating look at the artist’s work and life.

Greatest Works of Art at the Rembrandt House Museum

While the Rembrandt House Museum houses numerous important pieces of art, there are few classified as must-see. Here are five such paintings by Pre-Rembrandtists: 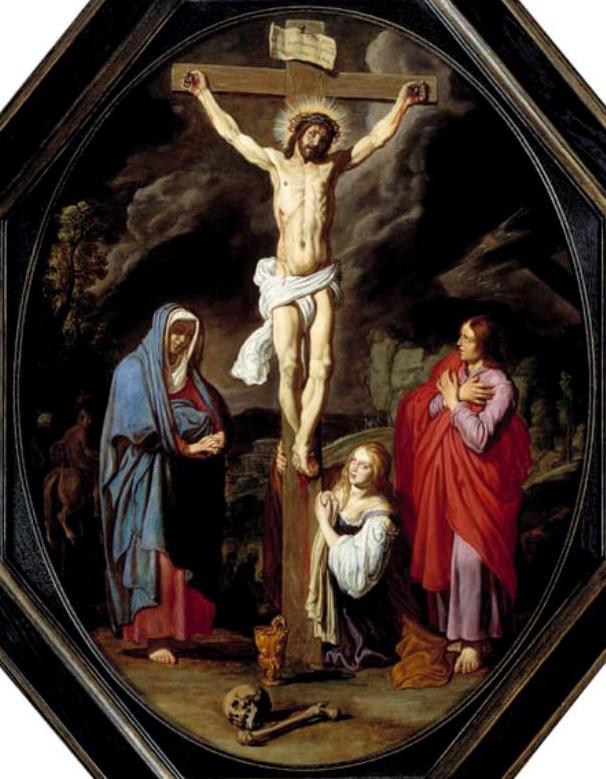 Depicting Christ’s crucifixion at Golgotha, the ‘Place of the Skulls', this painting is both beautiful and haunting. Lastman created four known crucifixion paintings but this is the most well-known and significant one. 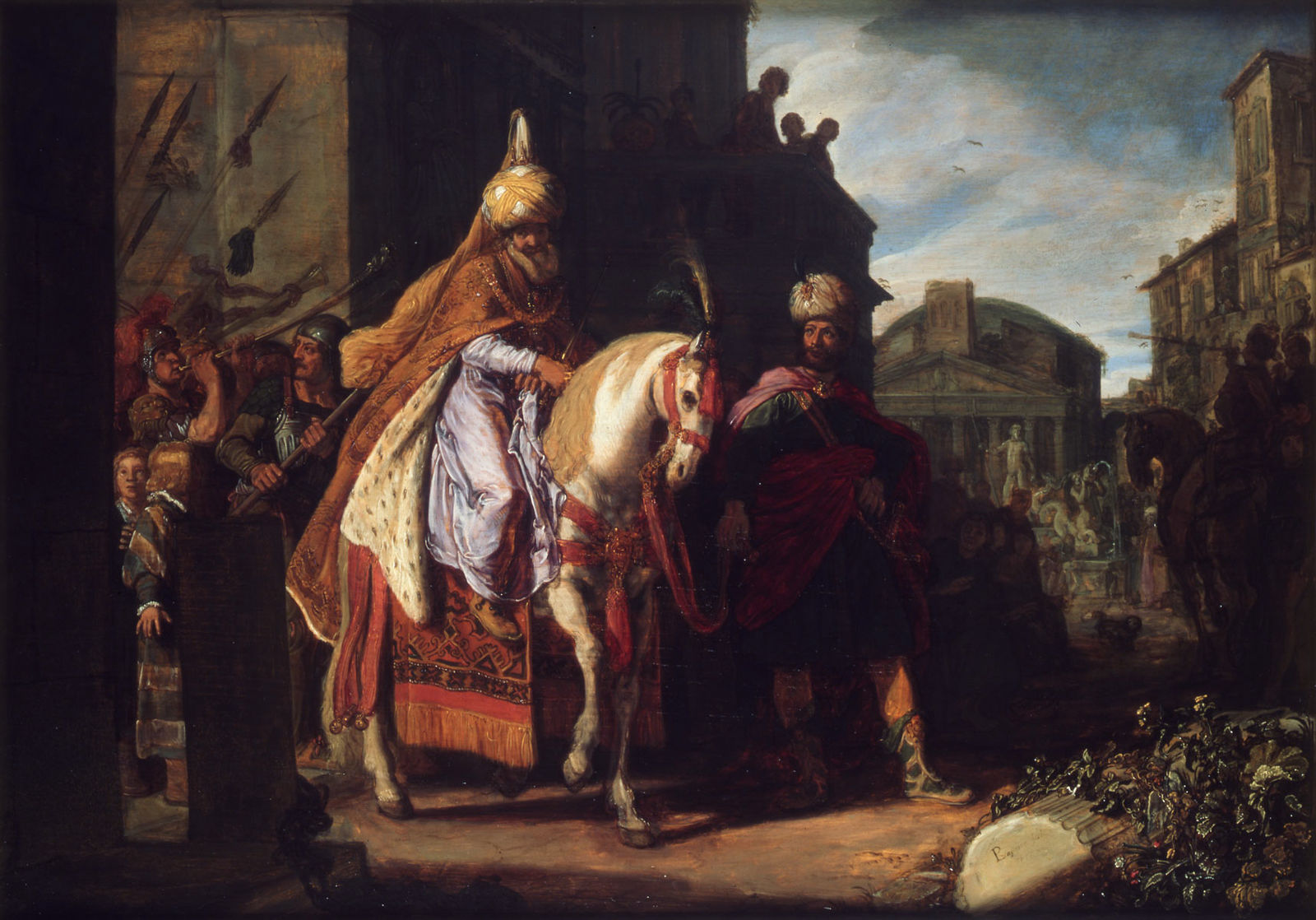 The Triumph of Mordecai, 1617 - Pieter Lastman

This painting recounts the tale of Mordecai, who prevented a conspiracy against King Ahasuerus. Haman, who assumed he was being honoured, suggested that the person should be given a glorious procession through the city, dressed in the king’s clothes and riding the king’s horse. 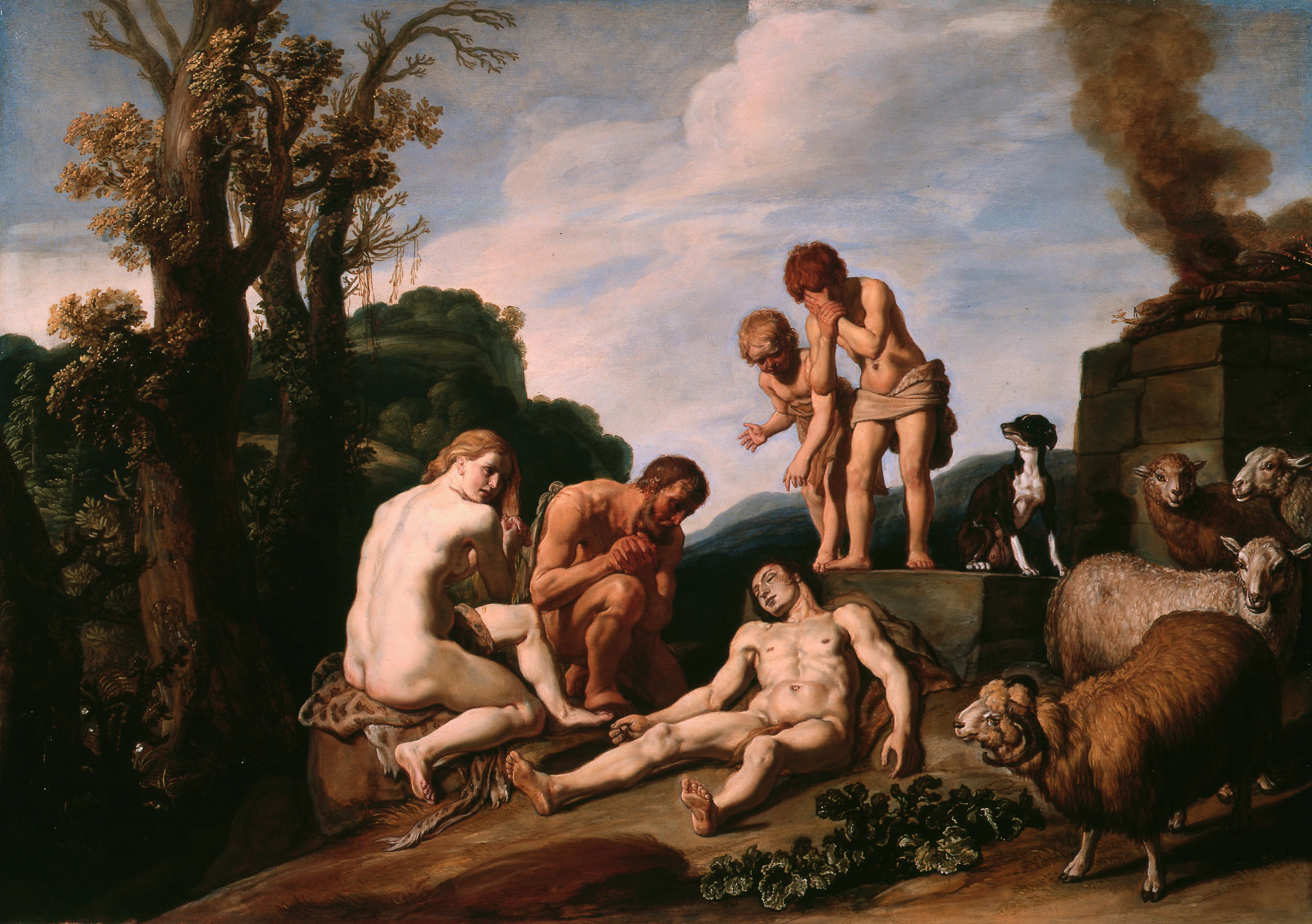 The Lamentation of Abel, 1623 - Pieter Lastman

In this renowned painting, Adam and Eve have been portrayed mourning their son Abel, who was slain by his brother Cain. Many art enthusiasts claim that the figures could also be other children of Adam and Eve. 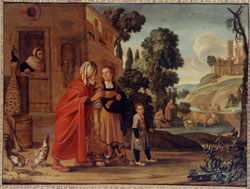 A favourite subject among Jan Pynas and his contemporaries, what makes this rendering of the story different from others is the hoop held by Ishmael in place of the regular bow and arrows.

The Sacrifice of Abraham, 1612 - Pieter Lastman

This painting showcases the moment Abraham was tested by the Lord to sacrifice his son, Isaac but stayed his hand. Rembrandt also painted this same story several times. Lastman had a considerable influence, both on the work of Rembrandt and on that of other painters.

Visit the Rembrandt House Museum, the place where Rembrandt lived and worked for two decades

Getting to the Rembrandt House Museum

The Rembrandt House Museum is located in Jodenbreestraat 4, which is considered the center of Amsterdam. The museum is close to the famous Waterlooplein and a mere 15- minutes’ walk from Amsterdam’s Central Station. If you're considering taking public transport to the museum, you've two reliable options to choose from:

Bringing your own vehicle or renting one in Amsterdam? The Waterlooplein, Muziektheater/Stadhuis or Valkenburgerstraat car parks are all situated approximately a 3- minutes’ walk from the museum.

The museum remains closed on 27th April and 25th December. On the 24th and 31st December, the Rembrandt House museum closes an hour early at 5:00 PM. On 1st January, the museum opens at 11:00 AM.

Visit the Rembrandt House Museum, the place where Rembrandt lived and worked for two decades

How long does it take to explore the entire museum?

You should allow at least an hour and a half. Do the audio tour and listen to the extra segments to get the most out of it.

Do I need to purchase tickets in advance to save time standing in line?

Yes, we recommend purchasing tickets online since you not only save time by not standing in the line but can also guarantee your spot since tickets tend to sell out pretty fast.

Is the museum open on Christmas Day, December 25th?

No, the museum remains closed on 25th December and 27th April.

What times during the day are the painting demonstrations held in the museum?

Can the Museum Card be purchased at the museum?

Yes. All the museums that are signed up to the scheme sell the card.

How much does each entry ticket cost?

Does the museum have a luggage room for travel bags?

Bags, rucksacks, baby slings, umbrellas etc. must be left in the cloakroom, which has free of cost lockers for your use.

How do I reach the museum from Central Station?

The museum is just behind Waterlooplein, which is a 15-minute walk from Central Station. Take any metro to and from CS Amsterdam and get off at the Nieuwmarkt or Waterlooplein stop. If you’re taking the tram, opt for tram line 14 and stop at Waterlooplein. 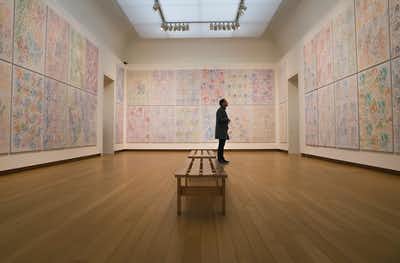 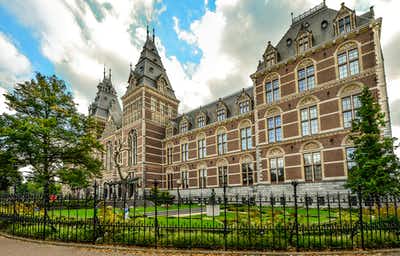 Van Gogh Museum Amsterdam | The Ultimate Guide For A First Time Visitor
Your Guide To Being Touristy At The Zaanse Schans Windmills
All You Need To Know Before Visiting The Keukenhof Tulip Gardens In Amsterdam
11 Most Instagrammable Spots In Amsterdam – Where to Take the Best Pictures in the City of Canals
12 Free Things To Do in Amsterdam
Amsterdam Travel Guide 2022: What To Do | Budget Tips | Day Trips & More
Heineken Experience Amsterdam Reopens Post COVID-19 Lockdown
Amsterdam’s Rijksmuseum Reopens To The Public