The city of Amsterdam beckons to the restless soul with its vast canal network, meandering bicycle paths, and 17th-century Dutch charm. The city has preserved its culture while keeping pace with the times. Its beaches, tulip gardens and vibrant nightlife are enough to tempt anyone. But a visit to this ‘Venice of the North’ is incomplete without a trip to the famed Van Gogh Museum, a 21st-century tribute to the life and works of the ingenious Van Gogh. The four-storied museum houses art galleries which display the works of Van Gogh and his contemporaries like Monet, Gauguin, and Millet. If you seek to visit the museum and are looking for the ultimate guide to getting Van Gogh Museum tickets, tips, directions and more, we've got you covered!

Van Gogh Museum - In a Nutshell 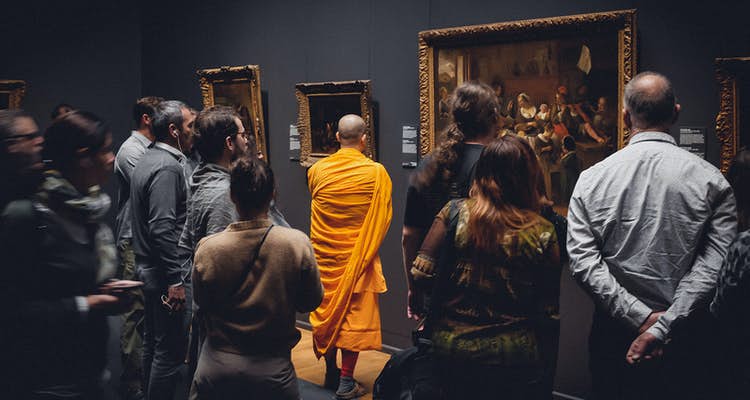 Vincent Van Gogh was one of the most influential artists in the history of Western art even though his brilliance was short-lived. Following his suicide in 1890, Van Gogh’s artwork went to his younger brother Theo. But after his sudden demise, Theo’s widow, Jo Van Gogh-Bonger took it upon herself to raise public awareness of Vincent’s paintings in various ways.

Her son, Vincent Willem van Gogh set up the Van Gogh Foundation, and the state of Netherlands built the stately Van Gogh Museum in Amsterdam in 1973 next to the Rijksmuseum. The museum has on display the largest collection of paintings by the artist, more than 200, along with hundreds of letters, drawings, and personal belongings. The rough beauty of post-impressionist art is preserved in its art galleries. The museum saw a footfall of 2.26 million in 2017, so book your tickets well in advance to avoid long queues!

A visit to Amsterdam is incomplete without exploring the Van Gogh Museum. Vincent's priceless paintings are housed in this state-of-the-art museum, which comprises two buildings, connected by the glass entrance hall. The museum’s permanent collection is on display in the main building, the Rietveld building, designed by the architect Gerrit Rietveld in 1963-64. The Kurokawa wing is asymmetrical in design and hosts temporary exhibitions. The Rietveld building has a café, a souvenir shop and an introductory exhibition.

The first floor houses Van Gogh’s work arranged chronologically, so one can take a journey with Van Gogh’s growth as an artist. The second floor houses Vincent’s letters, belongings, and other exhibitions. The third floor displays the world of post-impressionist art in its bold glory, displaying works of Van Gogh’s contemporaries. 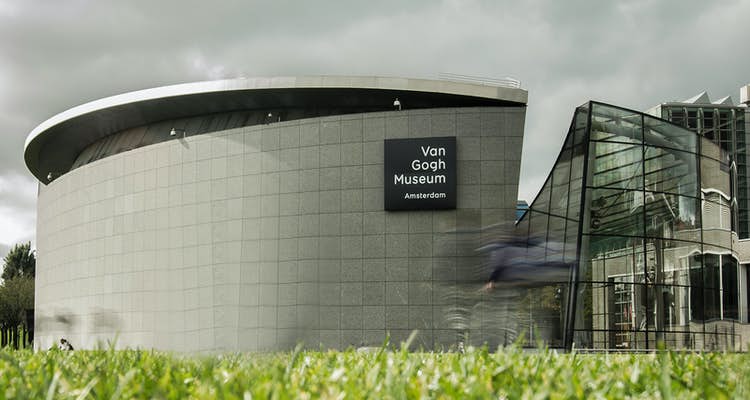 A museum that clocks over 2 million visitors every year is bound to be crowded. Arriving at opening time or after 3 p.m. on a sunny weekday is the best time to avoid long waiting times. It should be noted that waiting lines in Amsterdam tend to double during rains.

To avoid the ticket queue, book your Van Gogh Museum tickets online in advance. The booking opens four months in advance and you need to arrive within 30 minutes of your time slot. An entrance ticket for the museum grants you access to all the temporary exhibitions as well.

The average visitor takes 1 hour 15 minutes to properly explore the permanent collection. The museum has a café and a souvenir shop on the ground floor and a bookshop on the third floor, offering a wide selection of products inspired by the life and work of Van Gogh.

3. Use the interactive audio guide

The museum also offers an interactive audio guide, which is tailored for all types of audiences. The multimedia tour is available in eleven languages for €5. The multimedia guide for deep insight into the museum’s permanent collection can be booked online for convenience. 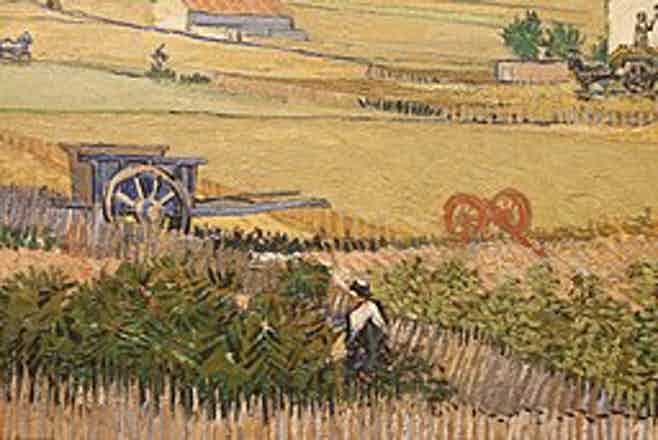 Considered by the artist as one of his most successful works, Van Gogh painted The Harvest in 1888. The painting attempts to capture the bright, radiating heat of Arles in summer, with peasants working in the rural landscape. 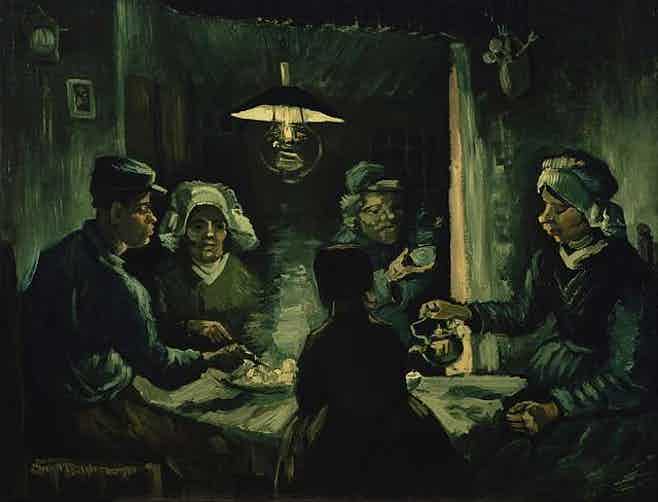 Painted in 1885, Van Gogh wanted the Potato Eaters to be his best work to date. He depicts the harsh reality of country life, where the peasants till the earth and earn their food. 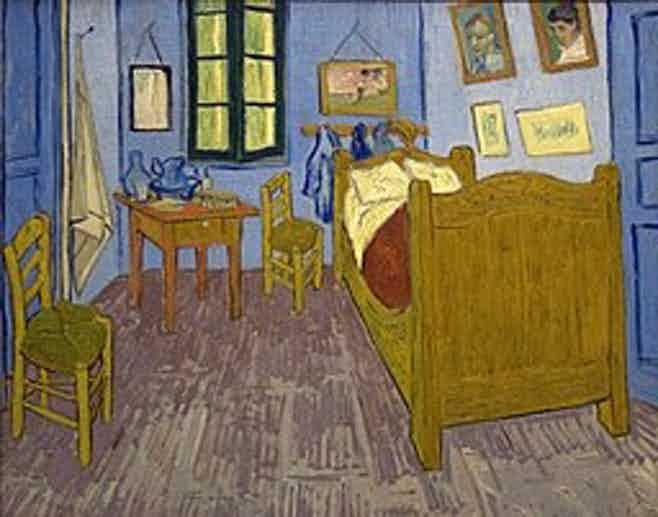 In 1888, Van Gogh prepared his two-story rented building in Arles and invited fellow artists to live and create together. This rendering of his bedroom in soft colors is meant to suggest sleep or rest of the mind.

4. Head of a Skeleton with a Burning Cigarette

Van Gogh painted it as a joke during his time at the art academy in Antwerp. Completed in 1886, the painting depicts his skill in painting human anatomy.

Possibly Van Gogh’s last painting, Tree Roots is an explosion of bright, seemingly abstract colors. On careful observation, one can make out the slope with tree trunks and roots. The work remains unfinished, due to his untimely demise.

Iconic menacing skies with crows circling over the yellow-orange field, this masterpiece by Van Gogh was finished in 1890. The painter wanted to convey sadness and loneliness, in contrast with a healthy and fortifying countryside. 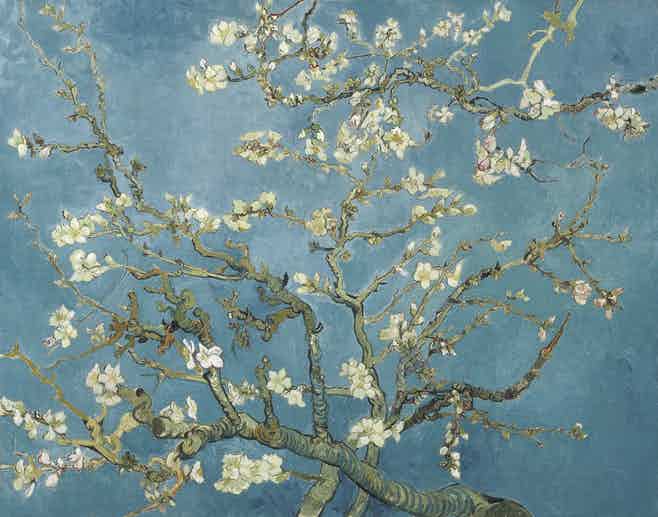 Completed in 1890, this joyful painting of almond branches and blossoms under a clear blue sky was supposed to be a gift to his brother Theo, to mark the birth of his son Vincent Willem. 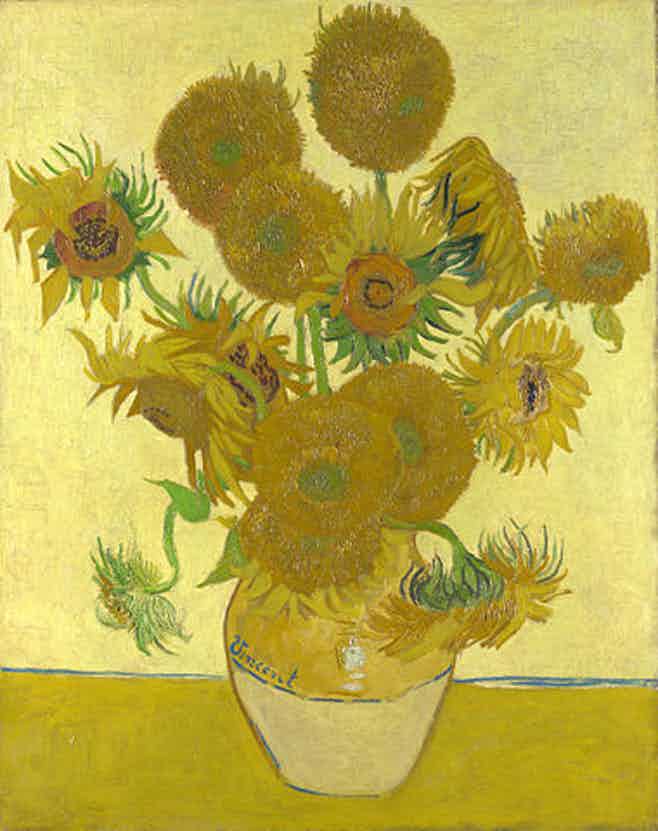 Van Gogh’s signature Sunflowers were created by using variations of a single color. Completed in 1889; for Vincent, the sunflowers represented ‘gratitude’ and he hung the first two in the room of his friend, the painter Paul Gauguin. 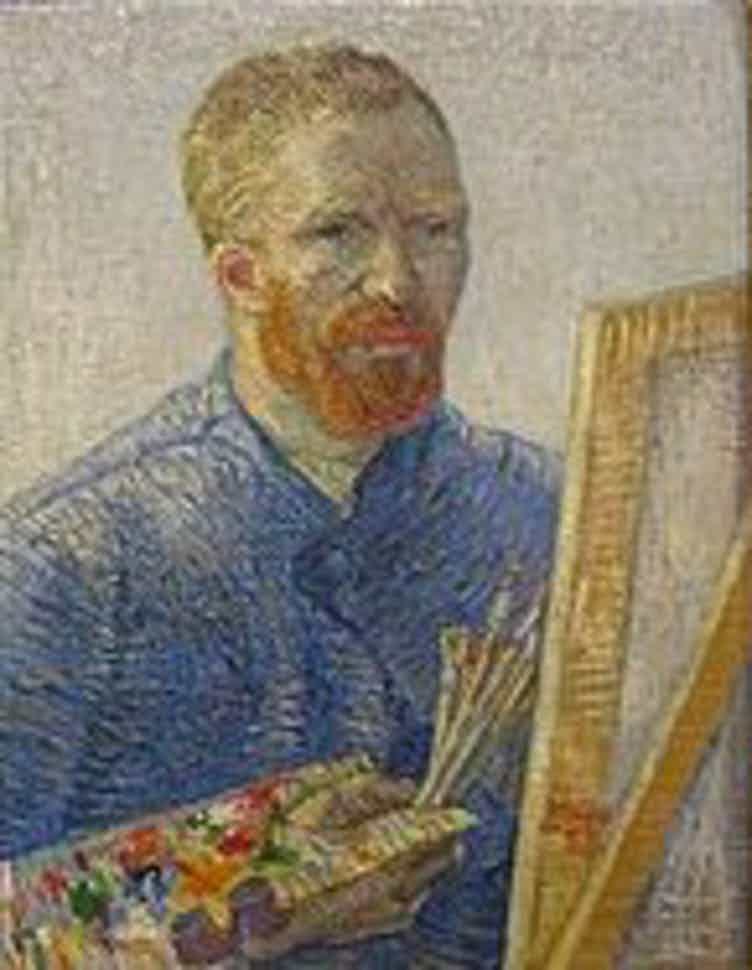 9. Self-Portrait as a Painter

Van Gogh renders himself as an exhausted painter holding a color palette and brushes in hand. This was completed in 1888, probably his last piece in Paris, a city of which he eventually grew weary of.

An eccentric choice as subjects of a painting, Van Gogh supposedly bought used work shoes and then walked around in them through the mud to make them interesting. Vincent painted several still life of shoes during his time in Paris in 1888. 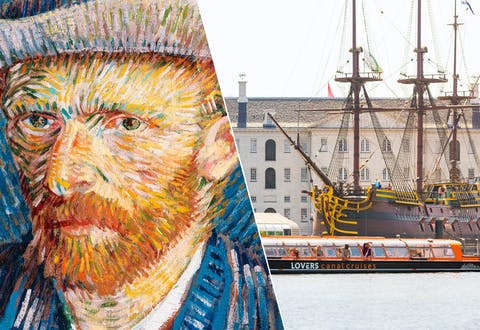 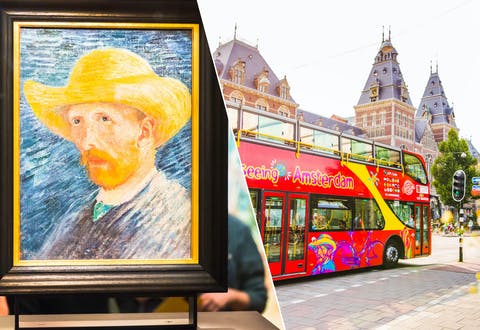 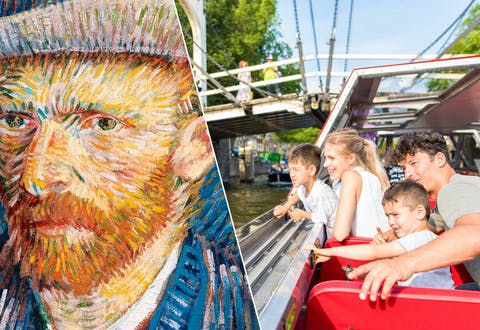 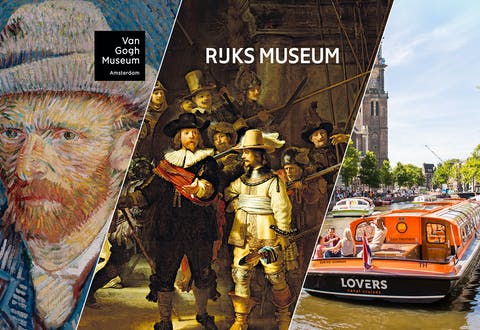 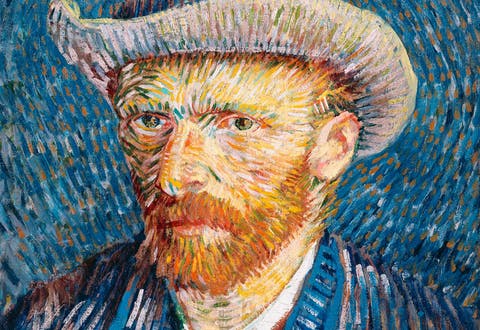 The Van Gogh Museum is located at the Museumplein in Amsterdam.

Easily accessible by car, the nearest car park is Q- Park, located underneath Museumplein. There is a paid parking option on the streets near the museum too.

Multiple Trams and metro lines connect Amsterdam to the Museum’s nearest stops: Van Baerlestraat (tram 2, 5 or 12) or Museumplein (tram: 3, 5 or 12).

Things To Do Around the Van Gogh Museum 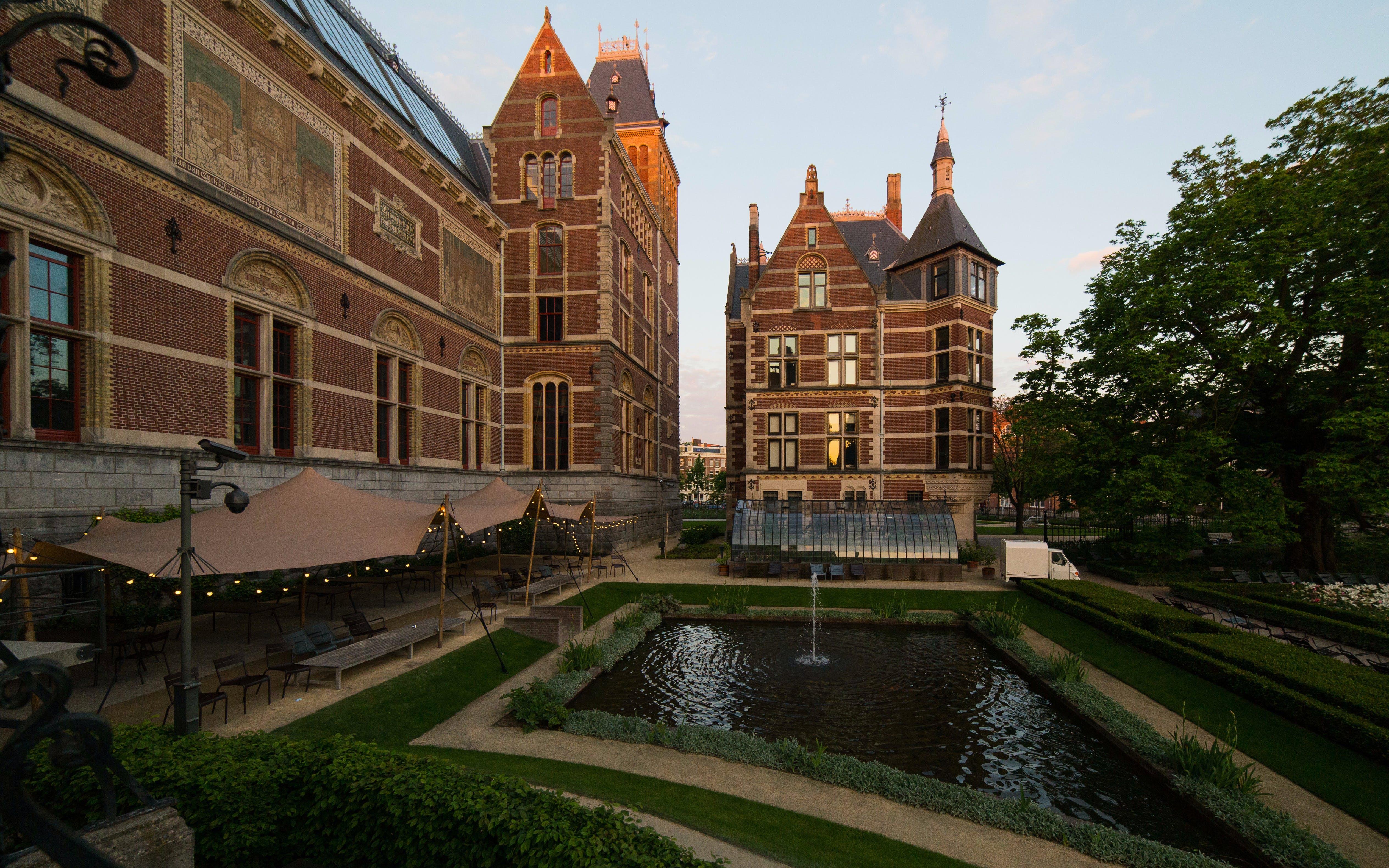 Rijksmuseum is a Dutch National Museum, the largest art museum in the Netherlands. With a collection of more than 8,000 artifacts spanning 800 years; it preserves the history of Amsterdam from the Middle Ages to the present. 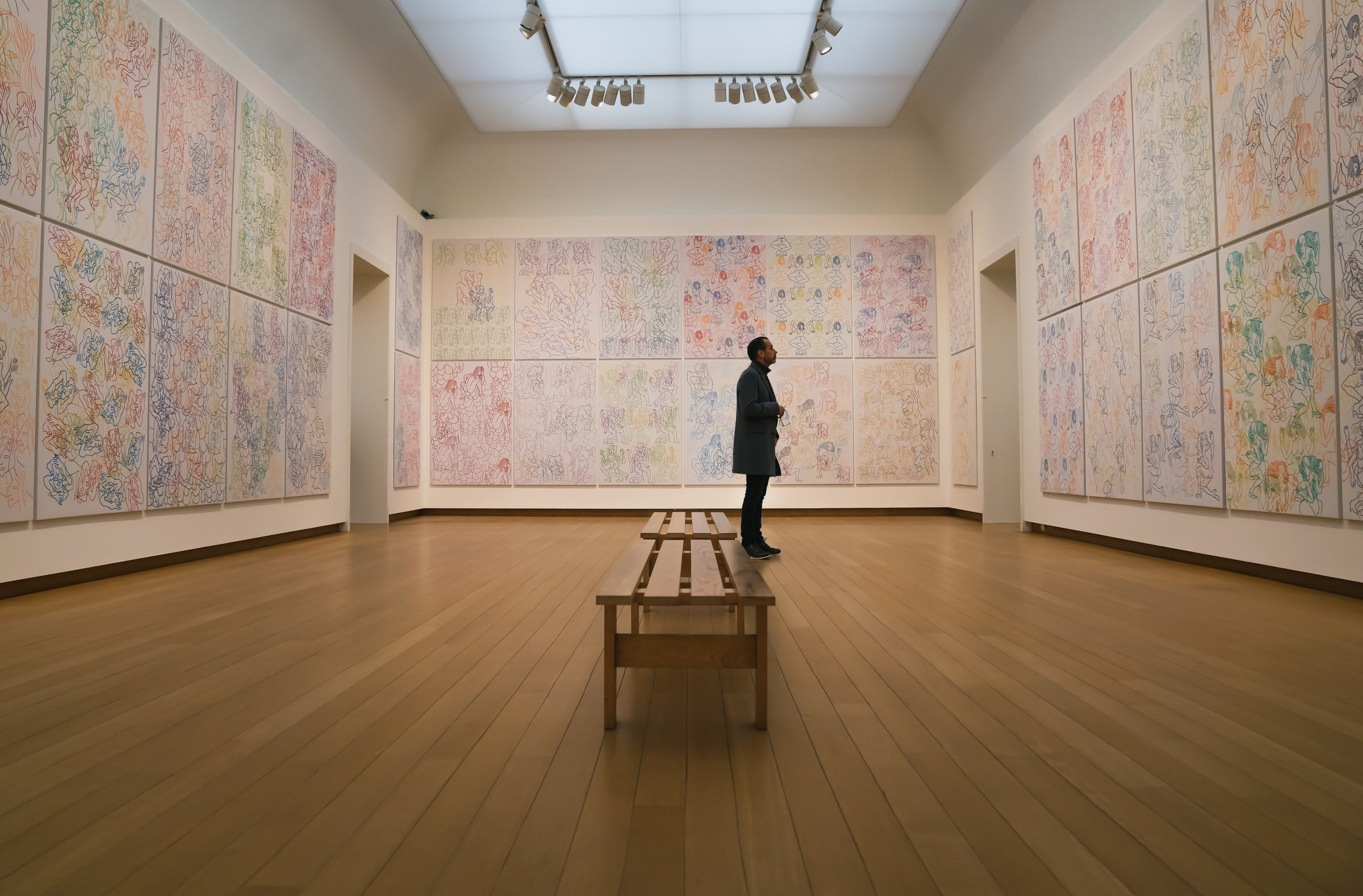 A museum dedicated to Modern and Contemporary art and design, the Stedelijk Museum is located next to the Van Gogh Museum. It houses the works of numerous renowned artists of the 19th, 20th and 21st centuries like Matisse, Mondrian, and Chagall. 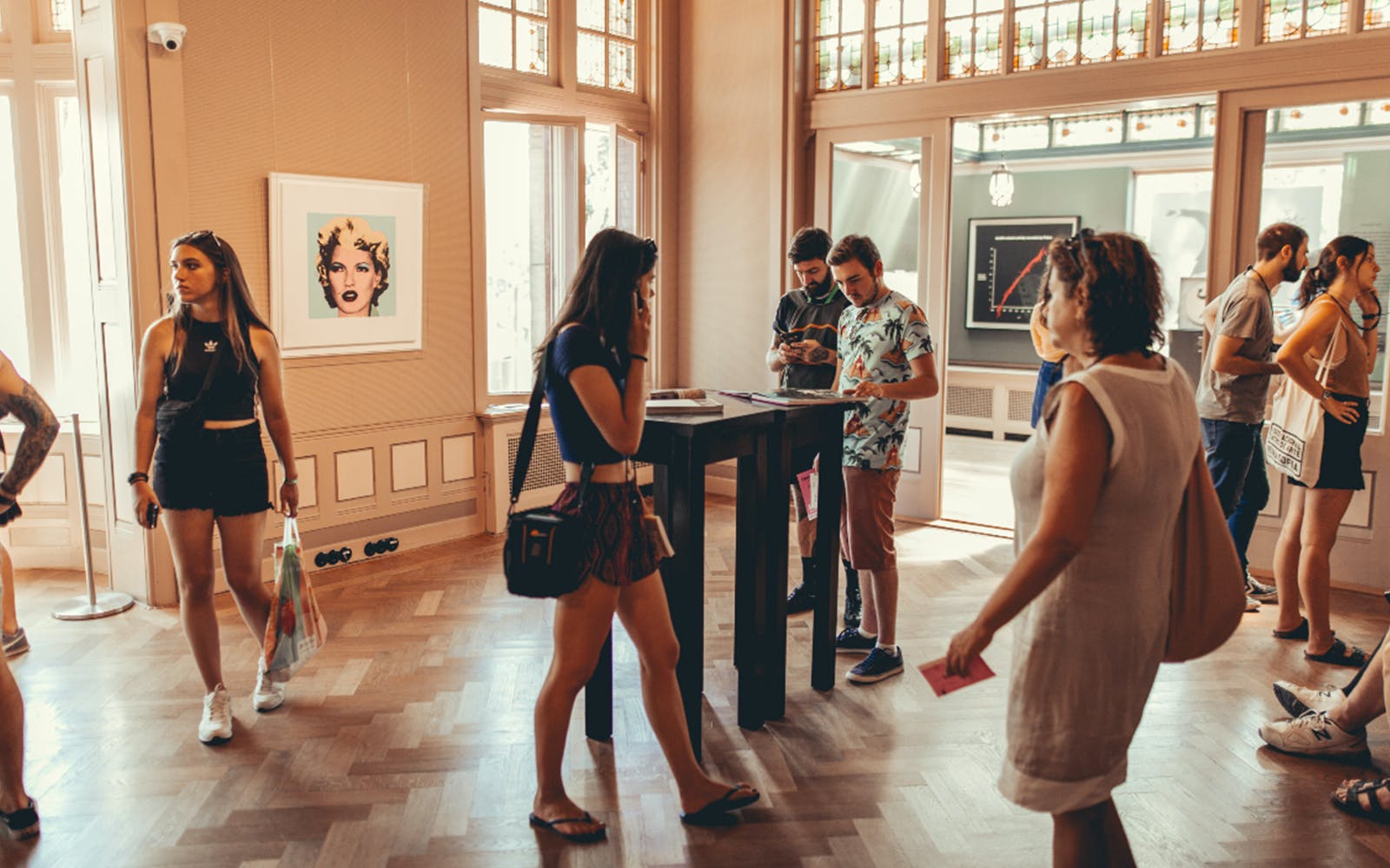 The Modern Contemporary Museum or the Moco Museum is situated in Amsterdam’s Museumplein. It is a private institution and has the distinction of hosting the works of the avant-garde like Banksy.. 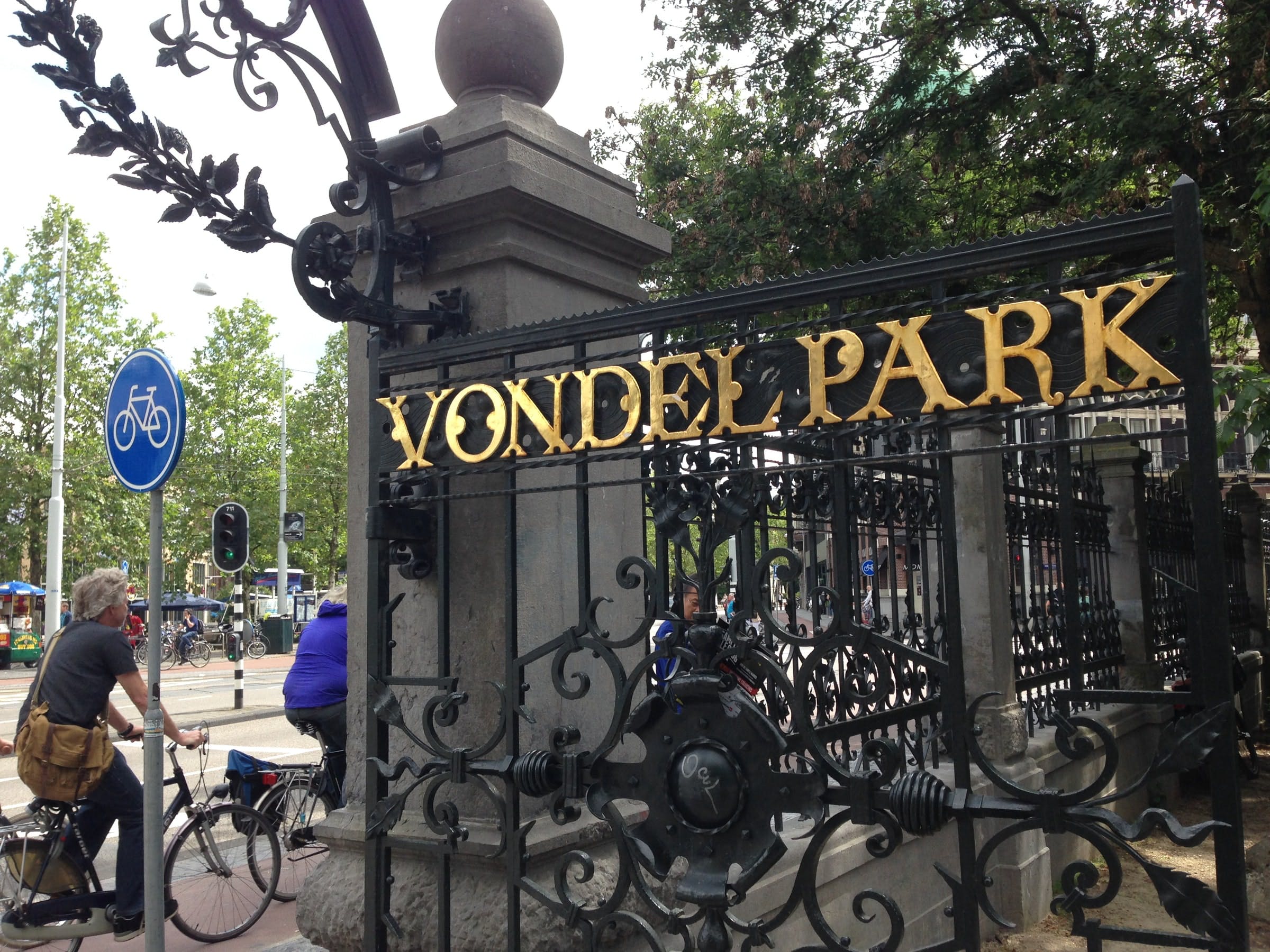 A must-visit in every tourist’s list, Vondelpark has something for everyone. Situated near Museumplein, the urban park has an open-air theatre, playground, and cycle paths. 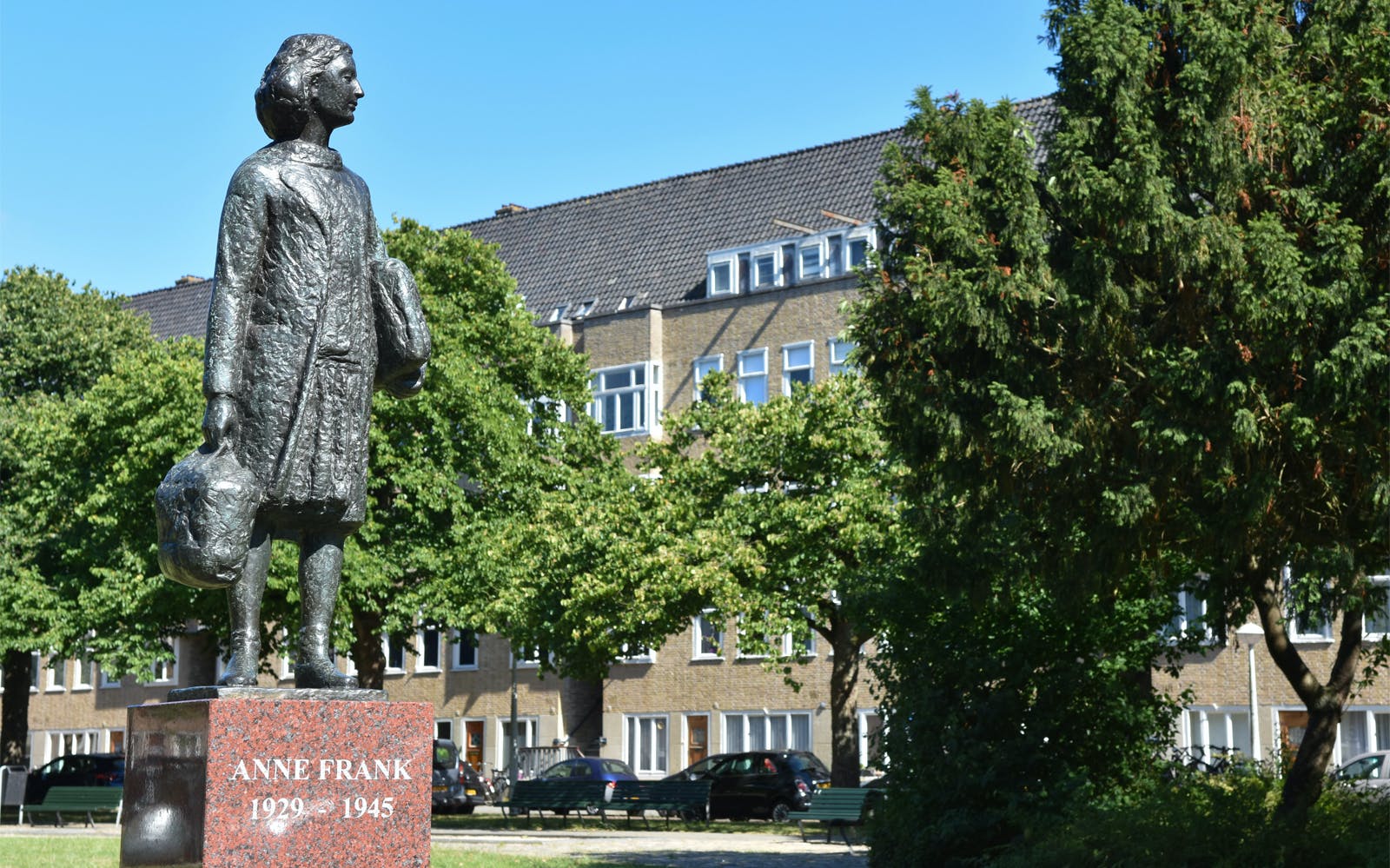 The tragic story of Anne Frank is known across the world. The secret annex in Amsterdam that she lived in during Nazi occupation has become a shrine to her, attracting visitors from all over the world. 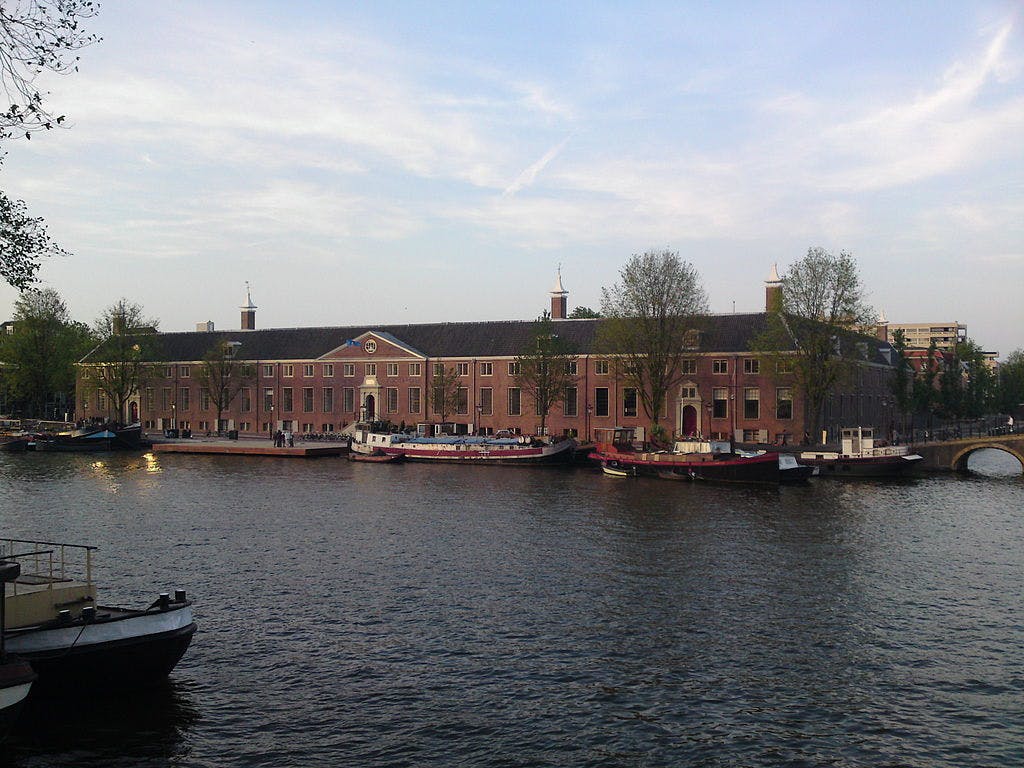 The Hermitage Amsterdam is a branch museum of the eminent State Hermitage Museum in St. Petersburg, Russia. The picturesque building in the Southern Canal Ring of Amsterdam hosts exhibitions from the grand collection of its parent museum.

Do I need to buy separate tickets for temporary museums at Van Gogh Amsterdam?

The Van Gogh Museum provides you access to all the exhibits with a valid entrance ticket, at no extra cost.

Is it worth booking Van Gogh Museum tickets online?

The Van Gogh museum guarantees you entry only with an online ticket.

Is there a discount for students, senior citizens, teachers or journalists at Van Gogh Museum Amsterdam?

No, the Van Gogh Museum does not offer discounts for students, senior citizens or teachers. Free entry for the press is only possible following registration and approval from the Press Office.

Can I store my luggage at the Van Gogh Museum Amsterdam?

No, the Van Gogh Museum does not provide a locker-room facility. It is advised to leave your luggage at the hotel or at one of the luggage service points in the Museum square.

Is there a free entry for children at Van Gogh Amsterdam?

The Van Gogh museum allows children below the age of 18 free entries. You can book a ticket with start time at no extra cost.

Is Van Gogh Museum Amsterdam worth it?

Is the Van Gogh Museum in Amsterdam open on Sunday?

The Van Gogh Museum is open all round the year.

Are Van Gogh Museum tickets free with an IAmsterdam card?

How much time should I spend at the Van Gogh Museum?

Depending on how much time you spend on each exhibit, the visit can take anything between 1 hour to 2 hours. On average, visitors spend 1 hour and 15 minutes to properly explore the permanent exhibit.

Which is better Rijksmuseum or Van Gogh Museum?

The Rijksmuseum and Van Gogh Museum are both top rated museums in Amsterdam. Both museums are rated 4.5 on Tripadvisor, however, it depends on what you'd like to see in a museum. The Van Gogh museum majorly displays works of the famed artist Van Gogh. Rijksmuseum on the other hand has a wider assortment of displays - paintings, pottery, coins, doll houses, clothing, furniture, Asian art, the library and the Gallery of Honour. Verdict: Go to the Van Gogh museum for an impressive collection of the world's most complex artists and head to the Rijksmuseum for a grand sweep of Dutch art history.