One of the most iconic churches in Europe, Sagrada Familia is a UNESCO World Heritage Site that sees hundreds of visitors each day. Known for its breathtaking architecture and interesting motifs, the basilica is the brain child of architect Antoni Gaudi. Drawing inspiration from nature, he designed the structure in Art Nouveau and Spanish Gothic style. 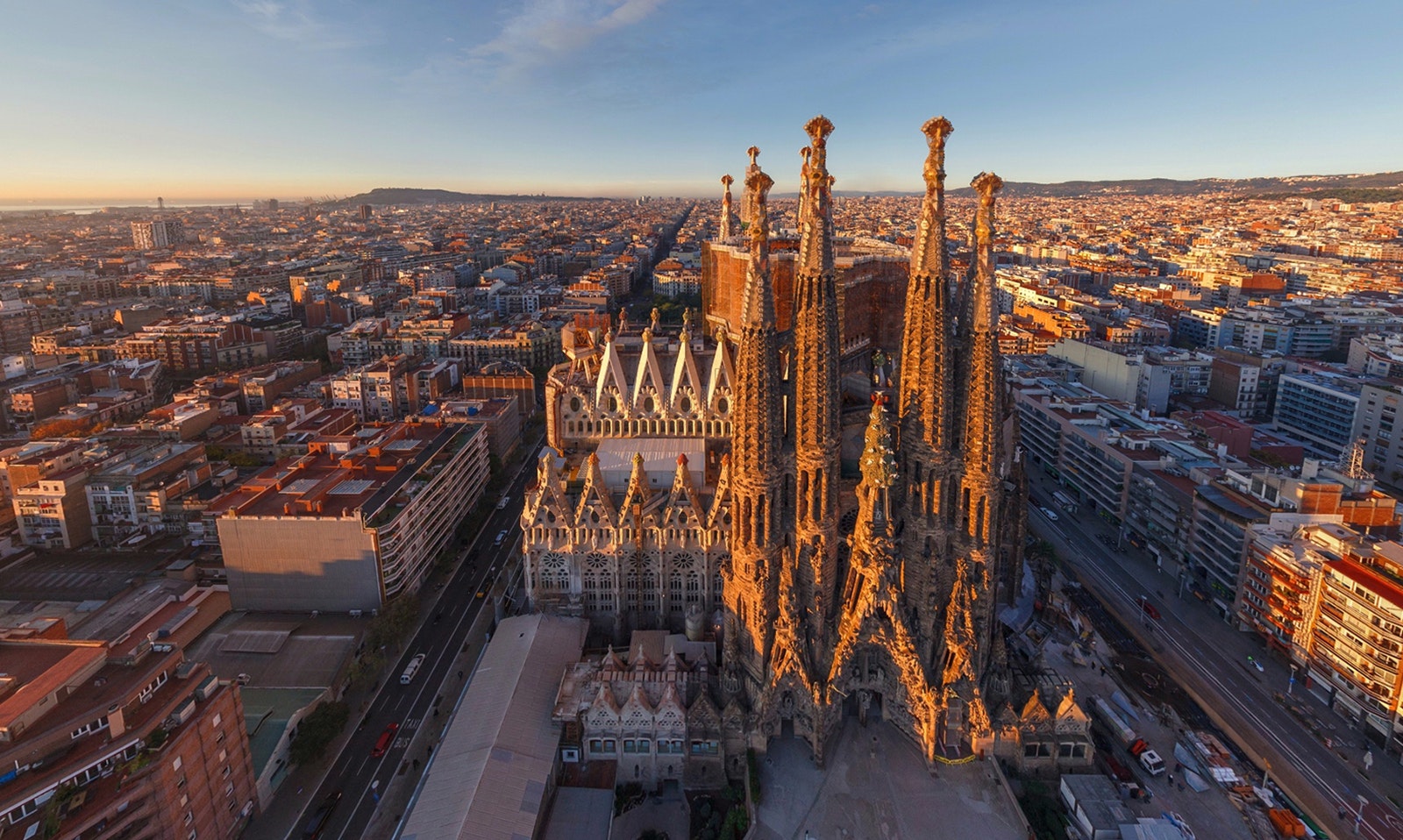 One of the most popular tourist destinations of Barcelona, the Sagrada Familia attracts thousands of people every year. However, visiting this basilica can become quite daunting, especially if it is your first time in the country. From waiting in line for hours to finding your way around the towers, it can become a time-consuming experience. An easy way to avoid this problem is to opt for a guided tour of the Sagrada Familia. Your expert guide will take care of everything, from finding a convenient time to planning the trip in detail. Thus, Sagrada Familia guided tours are, without a doubt, your best bet for an easy and hassle-free experience.

One of the most visited attractions of the city, Sagrada Familia sees hundreds of visitors every day. By opting for a Sagrada Familia guided tour with skip-the-line feature, you can save a considerable amount of time. Moreover, being part of a guided tour allows you to enter through a different gate with lesser waiting time than the standard one.

Sagrada Familia during sunset is indeed a sight to behold. With the light from the setting sun reflecting across the numerous stained glass windows, the entire basilica is covered with a golden hue. In fact, Gaudi constructed the basilica in such a way that the sunlight would light up different aspects of Jesus Christ’s life. However, since this is the most popular time slot, you will have to deal with long queues and crowded ticket counters. By opting for a Sagrada Familia sunset guided tour, you can enjoy the golden hour to its fullest.

Filled with intricate details, the symbolism of nature and secret corners, the Sagrada Familia has much to offer. The best way to truly discover this iconic landmark is by opting for a guided tour of the basilica. Your professional guide will answer all your questions and make sure that you make the most of your visit.

Hassle-free experience: Leave all the planning to your Sagrada Familia tour guide

On an average, the Sagrada Familia sees around 3,000,000 visitors every year. The crowd can be quite daunting for a visitor, especially if they are new to the country. For a hassle-free experience, you can choose a Sagrada Familia guided tour. Your professional guide will take care of everything, from securing tickets for the time slot of your choice to walking you through all the attractions of the basilica.

If you're visiting this Basilica on your Barcelona vacation, here's all you need to know about the Sagrada Familia entrances.

On this skip-the-line guided tour of Antoni Gaudi's masterpiece, get in line avoidance and head straight to the Sagrada Familia. You will be able to discover the significance behind the magnificent ornate decorations of the Sagrada Familia, as well as enjoy unrivaled views of Barcelona from the Passion tower, under the guidance of a local expert!

Take a skip the line guided tour of Antoni Gaudi's masterpiece to avoid the long ticket queues and go straight to the Sagrada Familia on this skip the line adventure. You will be able to discover the significance behind the magnificent lavish decorations of the Sagrada Familia while under the supervision of a local expert, as well as obtain unrivaled perspectives of Barcelona from the Passion tower!

With priority entrance, explore the Sagrada Familia, Antoni Gaudi’s in-progress masterpiece. Hear about the history of the basilica from your guide who would provide a 30-minute introductory explanation (well versed in English and Spanish) as you admire a UNESCO-listed structure.

Take advantage of these fast track Sagrada Familia tickets to explore this wonder of Barcelona! By avoiding the notorious line, you may save time and go straight to the intimate inner sanctuary of this magnificent basilica. Book your tickets ahead of time to guarantee access to one of the world's most distinctive structures, Antoni Gaudi's renowned work.

This 3.5 hour tour will introduce you to some of Antoni Gaudi's most visually appealing, yet odd, marvels of Modernisme - the Sagrada Familia and Park Guell. Not only will you get to see Barcelona's finest landmarks, but you'll also gain an understanding for what drove Catalan Modernisme and its importance to the region. 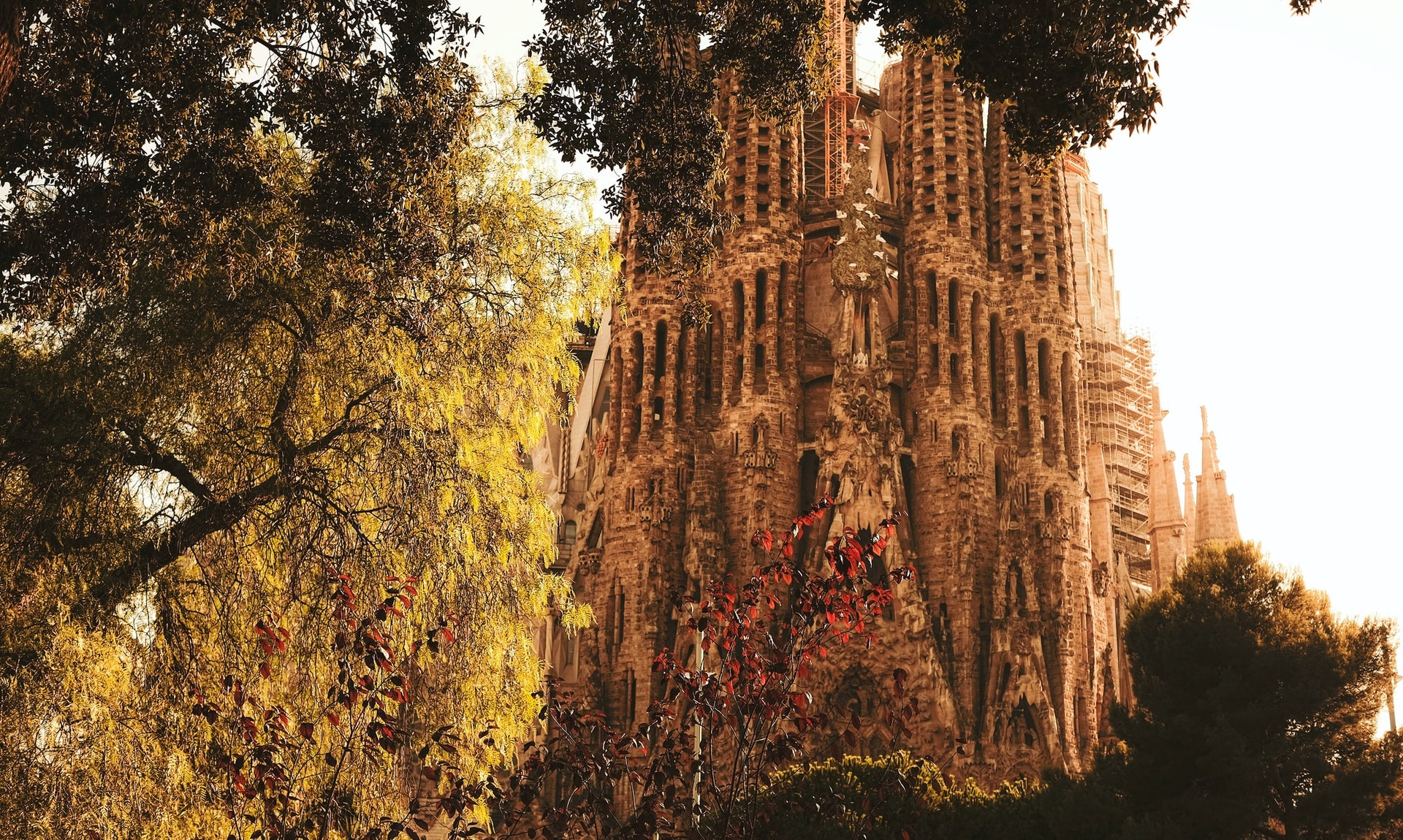 Complete with four towers and three doors, the Nativity facade is indeed a sight to behold. The intricate carvings include motifs from everyday life such as plants and human figures. Symbols of Christianity can also be found aplenty. Using these symbols, Gaudi has managed to depict the birth of Christ through the Nativity facade. Visitors can find depictions of the Three Wise Men, the Tree of Life, the Holy Trinity and many more at the Nativity facade. This intricate work of art can be found across the length of the tower, from the bottom of the structure up till the bell towers. 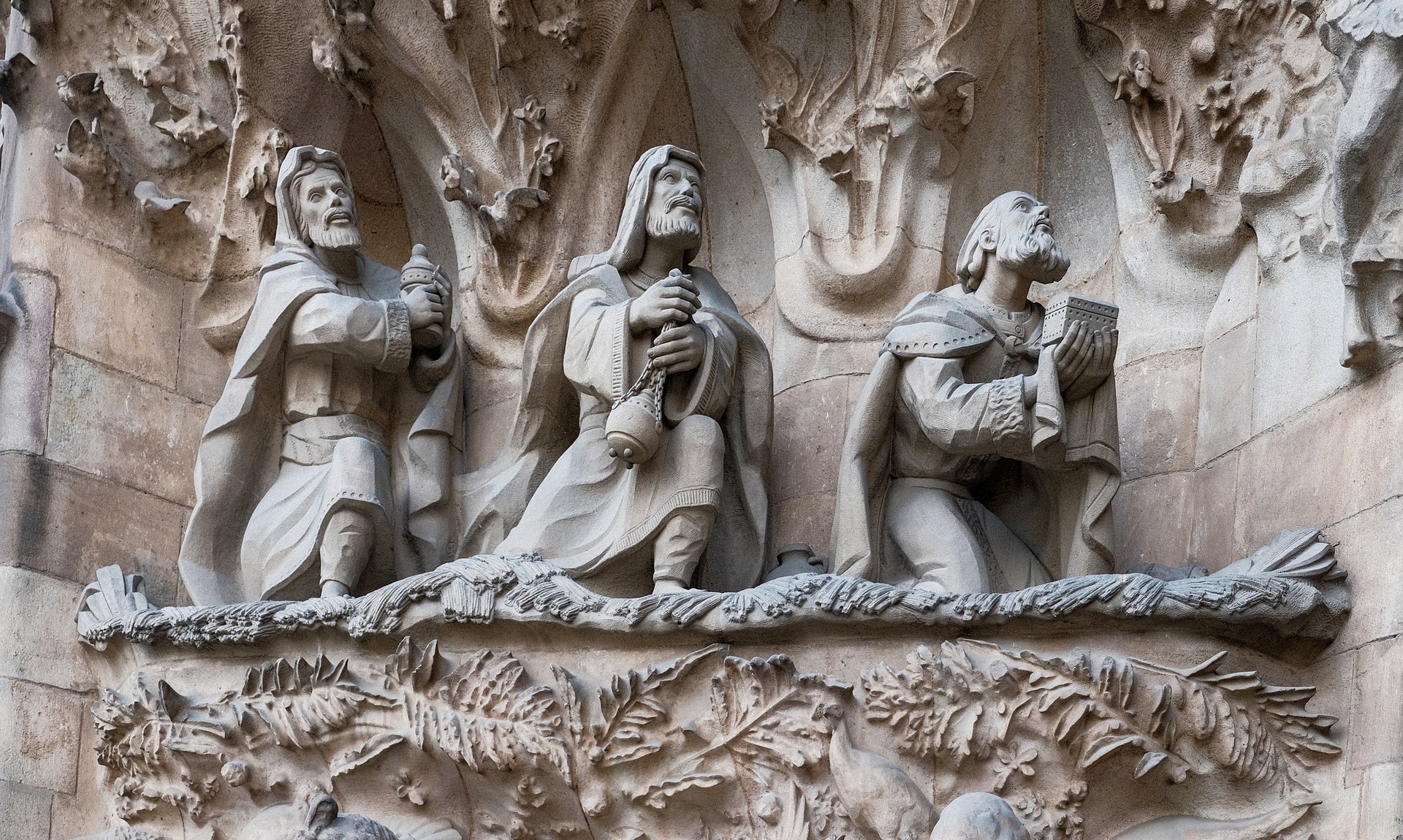 Just like the nativity facade depicts the birth of Christ, the Passion facade represents the passion and death of Jesus. This is beautifully represented through its geometric edges that lend a bare appearance to the tower. The use of plain stones in its construction adds to its simplicity. Each of the four towers that make up the Passion facade represents the four Apostles, namely, James, Thomas, Philip and Bartholomew. 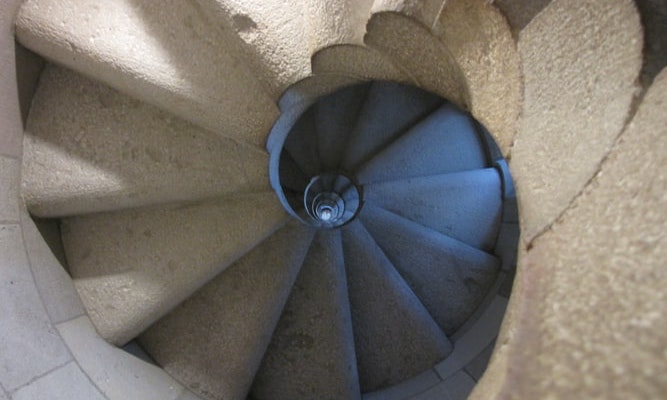 Usually used while coming back from visiting one of the towers, this architectural marvel was constructed to resemble a seashell. Be careful while you climb down these stairs as they tend to be quite steep. 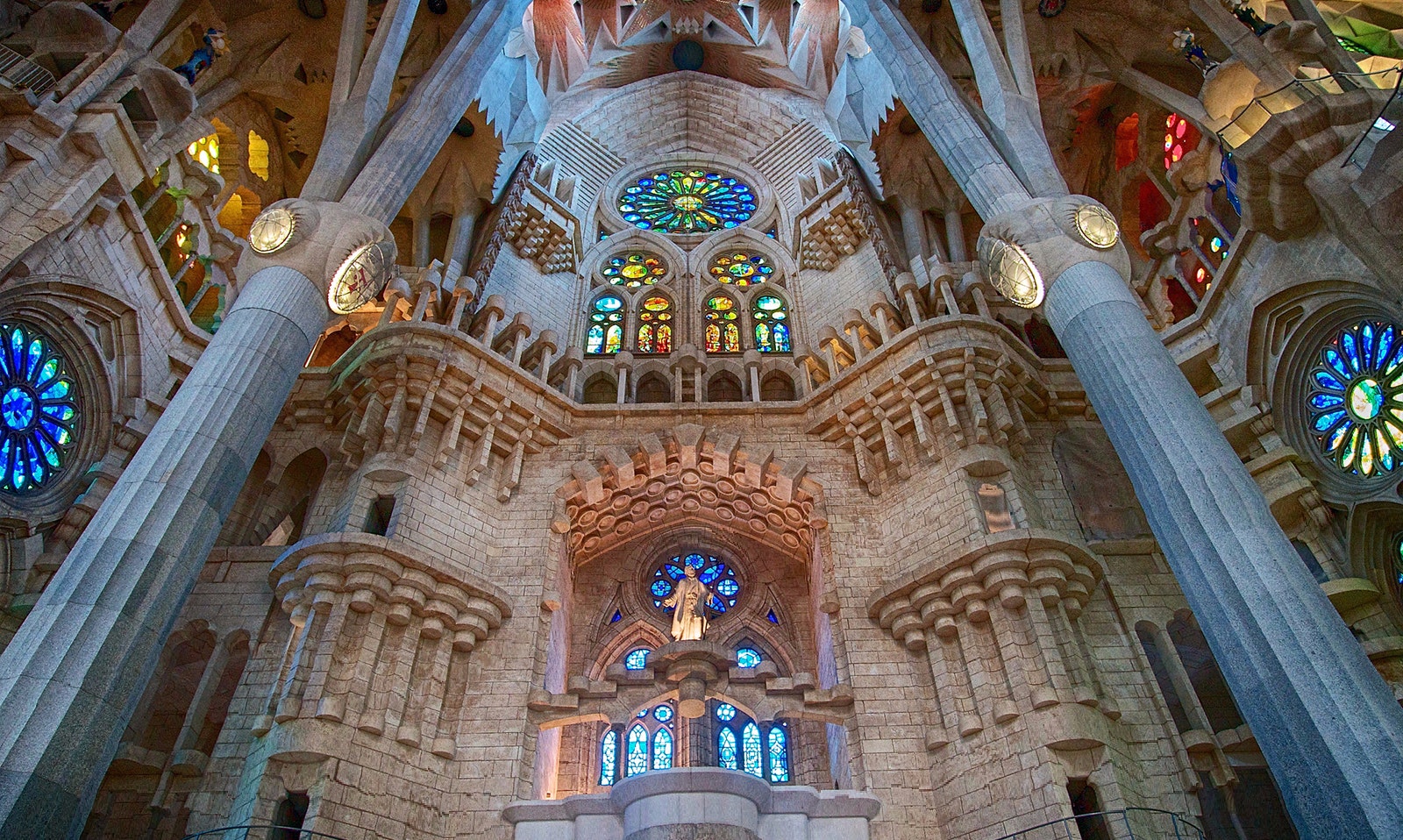 Gaudi adopted a gothic style in his architecture of the basilica. The interiors of the Sagrada Familia is filled with symbolisms of both christianity and nature. Visitors can spot them in the tree-like formation of the columns and the Latin cross-shape of the basilica. This is also especially apparent in the absence of straight lines in the structure. 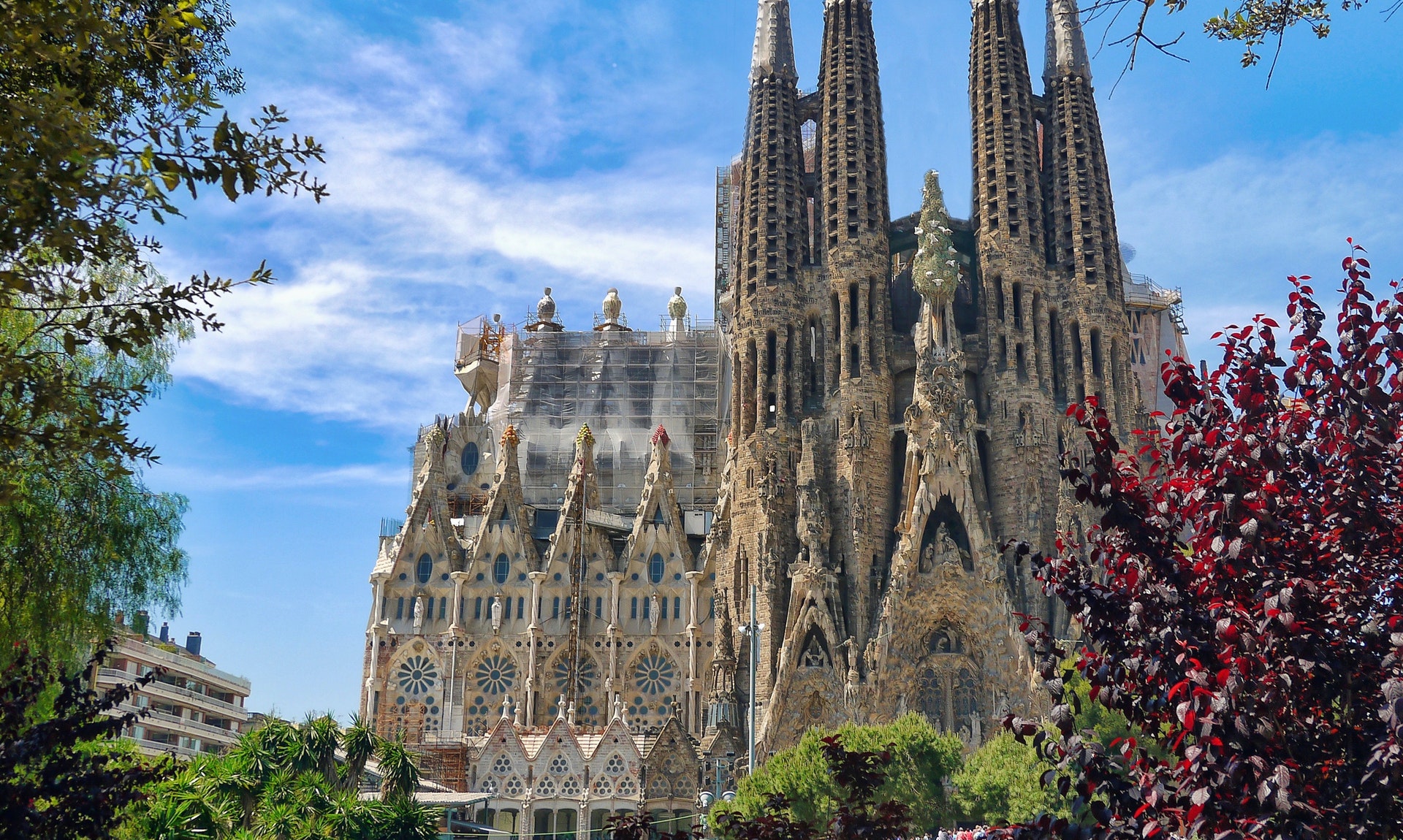 The original design accommodates eighteen spires that represent the twelve Apostles, Virgin Mary, four Evangelists and Jesus Christ. The height of the spires are in accordance with the importance of the person they represent. Thus, the tallest spire represents Jesus Christ and stands at a height of 560 feet. However, since Gaudi believed that man-made structures should never be superior to the creations of God, he designed it to be one-meter shorter than the highest point in Barcelona.

Nativity Tower vs Passion Tower: Which One To Visit

Unfortunately, your ticket with tower access will include only one tower. Unless you want to purchase two tickets, you will have to choose between the Nativity tower and the Passion tower. While both the towers are equally visited and of the same height, the only difference is that while the nativity tower faces East, the Passion tower faces West. This means that the tower of Nativity looks out towards the sea while the Passion tower is angled towards the city. You can use the elevator to climb up to both the towers. The climb down, however, has to be done on foot

The fact that the Nativity tower was built by Antoni Gaudi himself makes it even more appealing to visitors. Another feature that makes the Nativity facade more popular than the Passion facade is the bridge that connects the two Nativity towers. The view from this bridge is incredible, not to mention the way it has been built.

Reaching Sagrada Familia is quite easy as the network of public transport is quite well connected.

The Sagrada Familia has two entrances. If you have a pre-purchased ticket, head over to the Nativity façade entrance. On the other hand, if you are looking to purchase tickets, the ticket counter can be found in the entrance near Carrer de Sardenya road.
If you have tickets for a group tour, head over to the group entrance at Carrer de la Marina. You will also find a ticket counter there where you can make group bookings.

Can I visit both the towers with a Sagrada Familia Tower ticket?

No, you can only visit one tower per ticket. If you wish to visit both the Nativity and Passion towers, you will have to purchase two tickets.

How can I skip the line at Sagrada Familia?

Can I wear shorts while visiting Sagrada Familia?

Should I buy Sagrada Familia tickets in advance?

Since it is one of the most visited attractions in Barcelona, we recommend that you purchase tickets in advance. You can find tickets for Sagrada Familia guided tours here.

Can I take my bags with me while visiting Sagrada Familia towers?

No, you are not allowed to carry your bags with you while visiting Sagrada Familia towers. You can however keep them at the storage facility provided at a small fee.

Are children allowed inside the Sagrada Familia towers?

Yes, children above the age of 6 are allowed to visit the Sagrada Familia towers. If you are below the age of 18, it is mandatory that you should be accompanied by an adult.

Check out the top things to do in Barcelona and our all-inclusive Barcelona Travel Guide to plan your vacation like a pro!

Save €6 on your Sagrada Familia Tickets with this promo code.