All You Need To Know About The Sagrada Familia Towers

The Sagrada Familia is Barcelona’s most visited landmark and an icon of this Catalan city. Described as “sensual, spiritual, whimsical, exuberant” by the Time Magazine, the Sagrada Familia, Barcelona is a product of Antoni Gaudi’s imagination and a stunning example of Art Nouveau and Catalan Noucentisme architecture.

At first glance itself, it becomes easy to see why there is no building like the Sagrada Familia anywhere in the world. The heavily ornate exterior walls, the eye-catching and complex designs, the play of light and shadow on the wall reliefs and the magnitude of the construction is enough to overwhelm even the most ardent of architecture and design aficionados.

Antoni Gaudí envisioned the Sagrada Familia with 18 monumental spires. Twelve of them are dedicated to the Twelve Apostles and are placed on the three façades of the Sagrada Familia. The other six spires are dedicated to the Four Evangelists, Virgin Mary and Jesus Christ. Of the 18 spires, eight are completed. These correspond to the four Apostles of the Nativity Façade and the four Apostles of the Passion Façade. The tallest of all the 18 spires will be the one dedicated to Jesus Christ. It will be surmounted by a giant cross and will have a height of 170 metres (560 ft).

Know Before You Go Up The Sagrada Familia Towers

Click to read our Guide on Sagrada Familia for more information on Gaudi's Temple!

If you're looking for combo tickets that allow you access to the towers as well as the inner sanctum of Sagrada Familia, here are your best options. 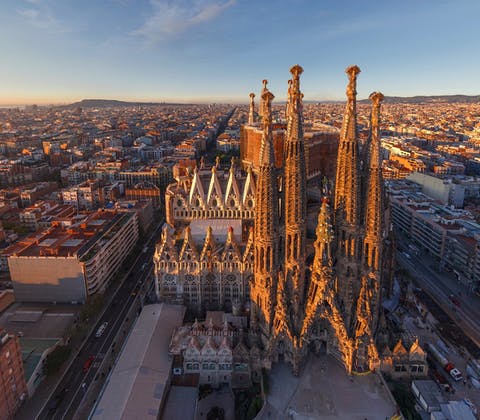 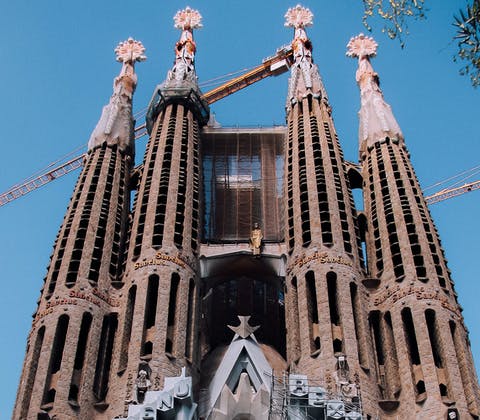 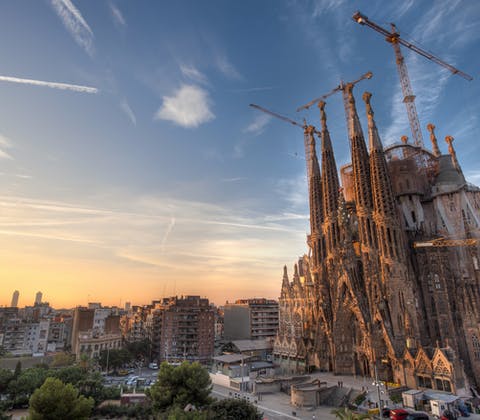 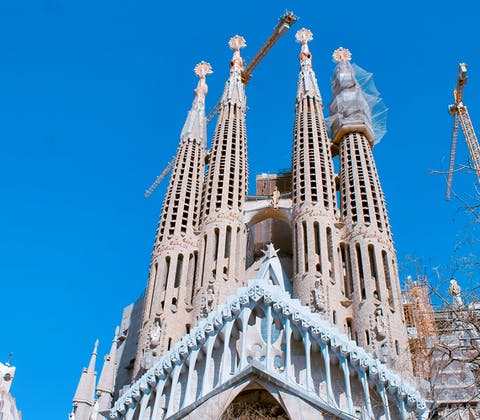 Fast Track Tickets to Sagrada Familia with Audio G...
from
€25 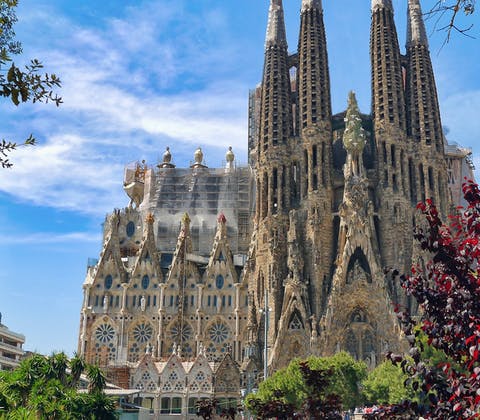 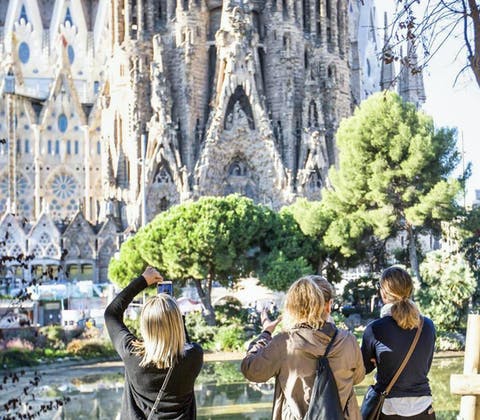 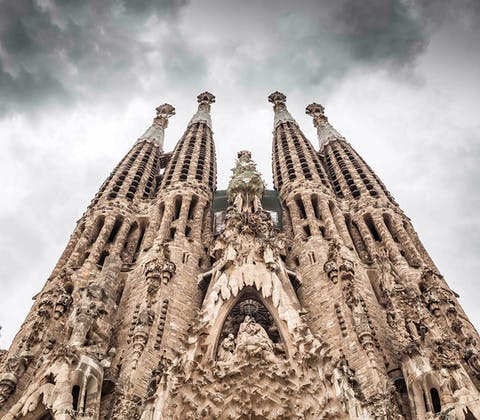 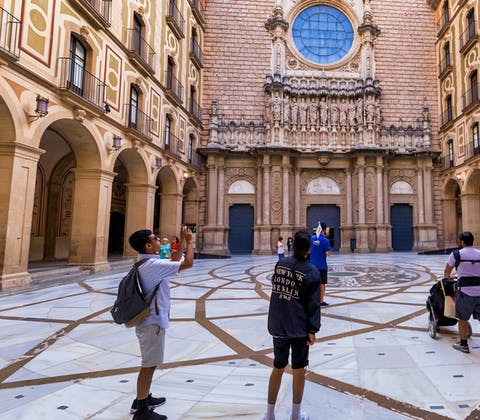 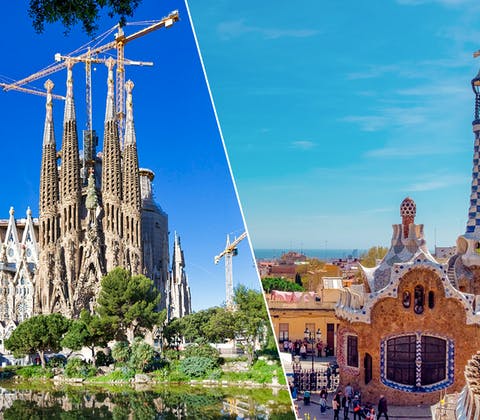 Guided Tour of Sagrada Familia and Park Güell with...
from
€66 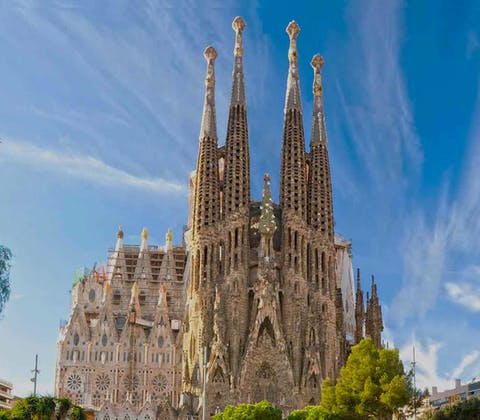 Fast Track Guided Tour of Sagrada Familia with Tow...
from
€54

Are the Sagrada Familia Towers Worth It?

The question whether visiting the Sagrada Familia Towers is worth it often strikes most tourists due to the prolonged ticket lines, additional costs and never ending crowds. Our answer to this is short and simple - It’s worth every penny! We have stitched up 3 solid reasons Why going up the Sagrada Familia Towers is Worth it, so read it for yourself and decide if you agree.

You can have a sedate tour of the Tower in an hour’s time. During crowded hours and days, it may take slightly longer, but not more than 1.5 hours. Check the best time to visit Sagrada Familia in our detailed blog here. As for the cost, there is just about a 14 Euro difference between the ordinary admission tickets Tower Tickets. We think the Sagrada Towers do complete justice to those 14 euros, the view, the history seeped walls and the intricate details . See the reviews by others who have gone up and you’ll know that a majority find going up the Sagrada Towers worth it.

All you have to do to reach atop is hop on an elevator that will swoosh you all the way up. You don’t have to sweat the least bit! However, the queues to these elevators might sweat you a little as they have a capacity of only 6 at a time, hence it may take a few good minutes of waiting to reach your turn , especially during peak hours. Coming down is an adventure in itself as you have to come down spiral stairs without railings. Though it sounds scary, there have been no accidents and is completely safe. However, kids below the age of 6 are not allowed entry to the Towers because of this tiny adventure.

We say this because the Towers were an integral part of Gaudi’s design as he had 18 towers planned, out of which only 8 are complete. The very reason the Sagrada Familia is taking so long to near completion is the complex design of the Towers, so you can rightly call the Towers the highlight of his design. Moreover, Gaudi himself built the 4 Towers of the Nativity Facade, so visiting these come close to experiencing Gaudi’s Sagrada.

While the views from both the Towers are splendid in their own rights, there are a few reasons we prefer the Nativity Tower over the Passion Tower.

Find out abouut the new guidelines introduced by the authorities ensuring the safety of visitors.

View from Nativity Tower vs View from the Passion Tower

Like we said before, there is no best view per se, as the views from the Nativity Tower and Passion Tower are starkly different from each other and beautiful in their own rights. The Nativity Tower flaunts views of Barcelona City and the mountains surrounding the city while the Passion Tower boasts views of the cool blue Mediterranean Sea. Depending on your appetite for an aerial view, you can choose either of them. Once again, both are equally great and like they say, beauty lies in the eyes of the beholder.

Many people are sceptical about going up the Sagrada Familia Towers due to the mere thought of coming down winding stairs.The stairs coil around the tightly closed walls and they are railing free. There are 504 stairs and though climbing them might seem like a task, it is entirely safe and not physically tiring. These spiral stairs resemble a snail, in sync with Gaudi's meld of architecture and nature. However, children below the age of 6 are not allowed to access the Towers as it not considered safe for them. Also, those who suffer from physical disabilities, claustrophobia and heart conditions are requested to refrain from accessing the Towers as it can be a strain for them and others alighting.

Know Before You Visit the Sagrada Familia Towers

How to reach Sagrada Familia

Buying tickets online means you can enter the Sagrada Familia through the reserved entrance of the Nativity façade on C/Marina. The metro station closest to the Basilica is also on C/Marina. This side of the Church faces the park which has a pond, and you can identify the gate by the black umbrellas in front of them.

Though the opening and closing hours of Sagrada Familia fluctuate through the year, here are the standard hours.

We were warned not to delay getting our tickets as the slots fill up quickly. I'm so glad we went online and booked the tickets on Headout. We got our desired time slot which included the tower access. The views of the ongoing work and up close, one-on-one time with elements of the facades (some of which are invisible from the ground) made the visit wonderful. The low, late afternoon sun enters the stained glass windows on a more direct line and fills the interior with amazing colors. The crowd was a bit overwhelming at times and some were sadly less than respectful of their fellow visitors or the greater purpose of the site.

Just as its amazing on the outside the inside is exceptional. The tower trip is worth doing great views of the city, the building work in progress and the ability to see the tower decoration close up. Although there is a lift up you take the stairs down and we came across a few elderly visitors who were struggling with the steps. We went up the passion tower which looks across the city so has the better views - so this gets booked up more - we booked online over a day ahead- but having the time slot.meant no real queuing. The audio tour is useful but we found it went into too much detail on some aspects eg the stone types used in the columns, whilst it would have been good to have more information on other aspects. Although you can see into the crypt from above it is not/was not open- which was disappointing. Just as you head towards the exit if you go towards the toilets and then right there is a display of architectural models etc which have been used in the construction which some may find interesting. 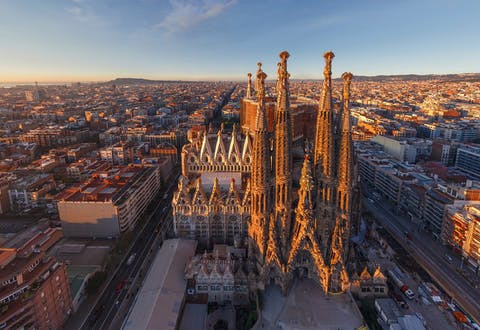 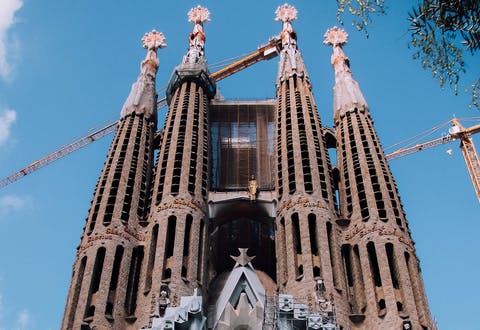 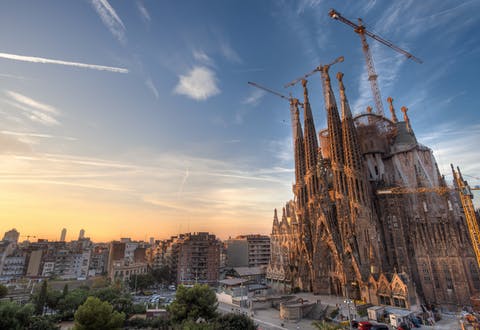 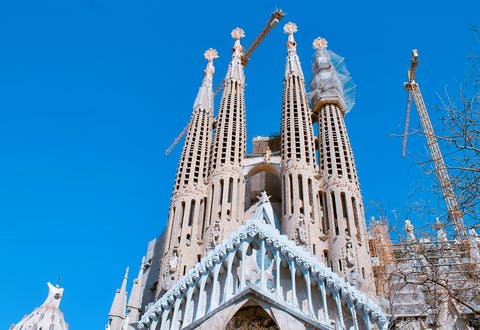 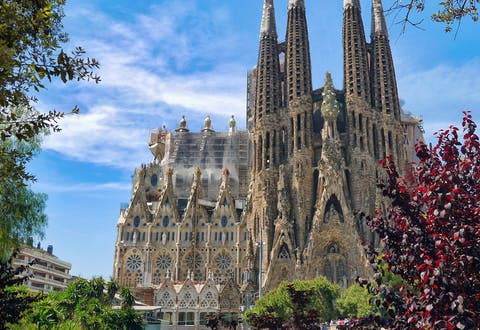 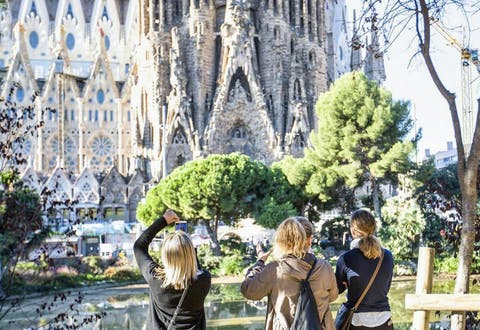 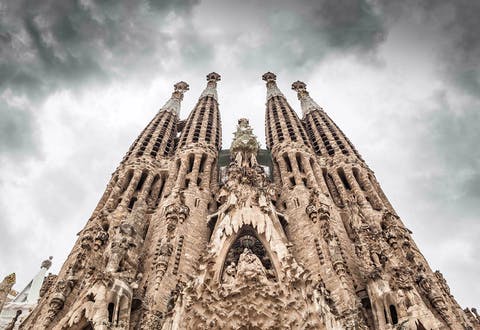 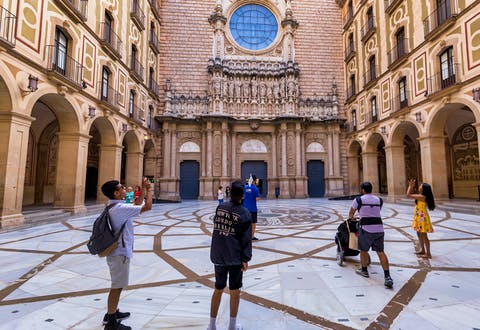 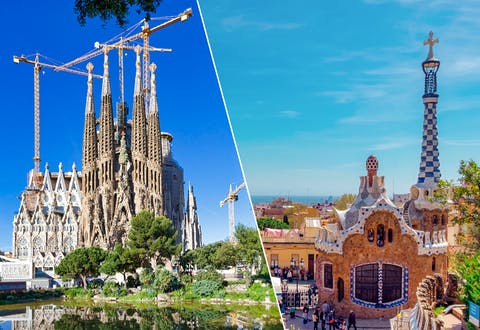 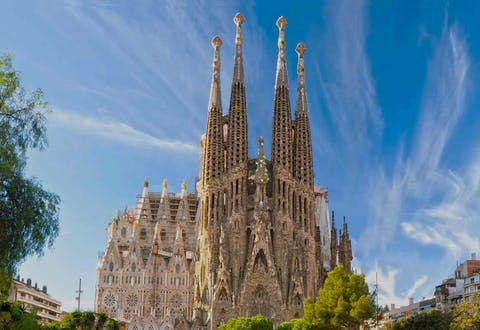 Can I climb the Sagrada Familia Towers?

An elevator takes you atop the towers. You need to use a narrow flight of stairs to climb down.

Which Sagrada Familia towers are open to the public?

The Nativity Facade and Passion Facade are open to the public.

Do I need to buy a separate ticket for the Sagrada Familia Towers?

Yes. Towers are not included in the standard admission ticket and must be bought separately.

Where can I buy Sagrada Familia ticket?

You can buy tickets online here or on the official website. The ticket counter at the venue also sells tickets.

Can I climb both the Sagrada Familia Towers?

No. The entry ticket permits a person to climb only one of the towers.

How long can I stay on the tower?

There is not time limit. It takes 1.5 Hours to finish visiting the tower altogether.

Which is the best tower to climb?

People prefer Nativity Tower over Passion Tower. Nativity tower’s construction is complete whereas Passion tower is ongoing, hence there are obstructed views due to construction equipment.

How much is the ticket for Sagrada Familia?

Where can I buy Sagrada Familia tickets?

You can buy tickets online here or on the official website. The ticket counter at the venue also sell tickets.

What are Sagrada Familia tower timings?

How to reach Sagrada Familia Towers?

By Metro: The metro station across Basilica has stops for Line 2 (purple) and Line 5 (blue) metro lines.

Why is the Sagrada Familia so famous?

Sagrada Familia is known for its Art Nouveau and Catalan Noucentisme architecture. It has been in construction for over 100 years since 1882. It is worth viewing the design, history and intricate design of the towers.

Is the Sagrada Familia finished?

No.The construction is expected to finish in 2026 and it was started in 1882.

What are the services available at Sagrada Familia?

Disabled people have a special entrance to the Basilica.Wheelchairs are available too.

What is the dress code in Sagrada Familia ?

Appropriate dressing is advised.Some of the restrictions are:

No see-through clothing is allowed.

Trousers and skirts must come down to at least mid-thigh.

Tops must cover the shoulders.

Is photography allowed inside Sagrada Familia?

Yes. Photography is allowed inside the Basilica.

What are the ticket prices for children,senior citizens and students?

Children below the age of 11 are allowed free entry.Senior citizens above the age of 65 pay EUR 14, students and people under 30 pay EUR 15.

Can you buy Sagrada Familia tickets on the day?

Yes. Tickets can be bought on the day at the ticket office.

Check out the top things to do in Barcelona and our all-inclusive Barcelona Travel Guide to plan your vacation like a pro!