Greece occupies a special place in every traveller's diary. Home to breathtaking islands and countless historical sites, Greece has something for everyone. Its capital, Athens, is one of the bigger attractions as one of the oldest cities globally and the home of Plato, Socrates, and other iconic thinkers.

It still has remnants of its rich history, yet it is a modern city beaming with world-class infrastructure. You can take in the city's beauty throughout the year, as the city enjoys a Mediterranean climate. The weather in June is particularly sunny, allowing you to enjoy its pristine beaches and resorts.

What makes Athens in June Special?

Athens shines like a knight in June. The capital of Greece enjoys average daytime temperatures of 30°C, with the sun shining for up to 12 hours. Sightseeing becomes fun and easy, as you can time your visit according to your convenience. The city's resorts and beaches also attract many visitors in June.

Visting Athens in June: Things To Do

The Acropolis of Athens is an iconic citadel that reminds you of Greece's marvellous history. It sits atop a hill and is the perfect mix of complex but artistic architecture. It houses important buildings such as the Parthenon and the Temple of Athena Nike. Exploring these monuments will take you on a journey through the country's civilisation. Museums are a civilisation's memory. The Museum of Cycladic Art is no different, home to art pieces from Cyprus and Ancient Greek civilisations. It also has 5000-year old rich collections of Cycladic art—a type of prehistoric art originating from the islands in the Aegean Sea. You can explore all four floors of the museum and learn more about Greece's history.

The Temple of Zeus has been reduced to ruins, but it still attracts thousands of visitors every year. It throws more light on the superiority and architectural might of ancient Greece. Built between 174 and 132 BC, the Temple of Zeus was one of the largest temples ever built, measuring 115 by 110 metres.

Ancient Greece was the birthplace of democracy. The Ancient Agora was where juries and politicians would gather to discuss issues and ideas. It is a huge complex, also housing the temple of Hephaestus—the god of fire— and the ruined remains of Bouleuterion, which served as the meeting place of ancient Greece's citizens.

History is not the only attraction in Athens. The Greek capital also offers an amazing culinary experience, giving you a taste of the delightful local cuisine. You can sample up to 15 unique Greek foods as you hop from one restaurant to another. The tour will pass through Athens' Central Market, the best place to enjoy local products.

The Greek islands are the country's pride. Despite attracting millions of visitors every year, they never fail to amaze tourists, offering jaw-dropping sea views. Sunbathing on the beaches is also popular among travellers, and a cruise trip allows you to experience it firsthand. Book any cruise trip and experience a new world in the Greek islands.

June Timings
One-day cruise trips can last up to 12 hours.

Meteora is home to six ancient monasteries that rise together with the massive sandstone cliffs surrounding them. It is a unique spectacle that demonstrates nature's grand design. A UNESCO World Heritage Site since 1989, Meteora is also the official holy place for Greece. Despite its terrain, it is just a short train ride from Athens.

Athanasiou Diakou, Athina 117 43
Greece
Getting There ›

Athens in June: Events to Look Out For

June 1 - June 2
Every year, Athens hosts the Epidaurus Festival, which includes cultural, musical, and theatrical events from new as well as renowned artists. It is one of the most popular festivals of any kind in Greece and has been running perpetually for the last 60 years.

June 2 - June 5
Summer calls for beach games, and that's what the Athens Golden Cup is about. It is held at the Syntagma Square and is organised by the Hellenic Volleyball Federation and the Culture, Sports & Youth Organisation of Athens. You can enjoy it at the beach or a rooftop hotel.

June 12- June 13
One of the leading festivals in Greece, the Summer Plisskën Festival, is the place to be if you live music. It brings some of the world's most iconic artists to stage, delivering a night to remember. The festival also has many workshops to learn different skills from professionals.

June 10 - June 18
The Athens Pride 2022 celebrates love and inclusivity unconditionally. Join in to celebrate equality and wave the rainbow flag with pride. Besides the parade, you can also enjoy exhibitions, screenings, performances, and parties. The grand finale promises to be a spectacle and includes a live music show.

Summers in Athens begin in June. It is one of the hotter months, although not as sticky as July and August. In June, the average daytime temperature reaches up to 30°C, with daylight lasting up to 15 hours a day. Sunscreen is a must to protect your skin from harmful UV rays.

Athens offers several options for tourists. Depending on your budget and needs, you can choose from different accommodation options.

Athens in June is sunny. It isn't sticky, but the sun shines overhead, so you might feel the heat occasionally. Sunscreen is mandatory unless you want to get tanned. Carrying a cap or a hat is also a good idea, while glares can help soothe your eyes. As far as clothing goes, wear something light. Also, carry a water bottle as you might feel thirsty frequently due to the heat.

Getting Around Athens in June

Following the 2004 Olympics, Athens has made great strides in public transport. The city is well connected by metro, bus, tram, and taxi.

Metro - The metro is the quickest way to explore Athens. It is also incredibly easy, as Athens has only three metro lines. The signboards are often only in Greek, so you might want to get a map to understand where you are going.

Buses - You can also take buses from different locations in Athens. It is affordable, although it can be unpredictable in terms of schedule. 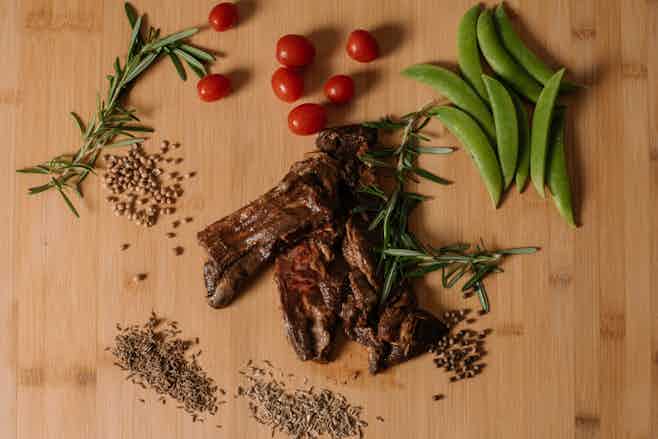 The Mousakka looks like regular lasagna but tastes so unique that you might not get over it. It is a popular traditional baked Greek dish containing minced beef, tomatoes, bechamel sauce, and a layer of cheese. Having it by the beach in June is a pleasure beyond words. 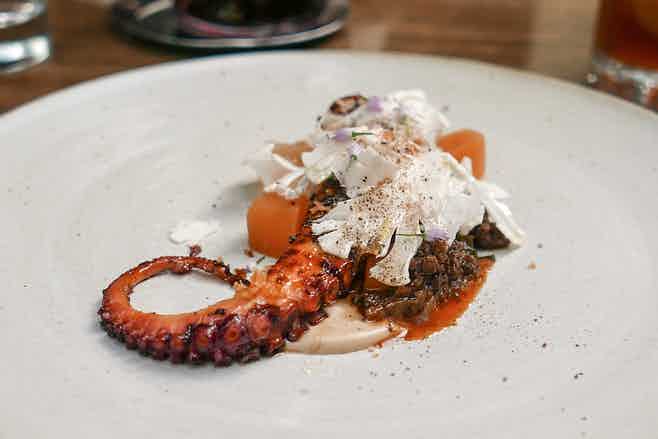 Straight from the Greek island of Paros comes this dip that is often used in many Greek dishes. The Tzatziki combines three ingredients—cucumber, yoghurt, and garlic—yet manages to satisfy your tastebuds and soul. 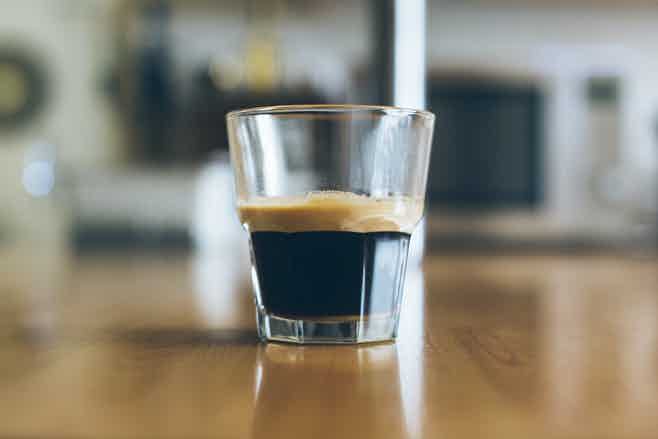 Don't worry; you can call this delicacy Zucchini balls. The Kolokythokeftedes is a meatball made of zucchini and some herbs and feta. It is creamy inside but crispy outside and can be enjoyed with Tzatziki as well. 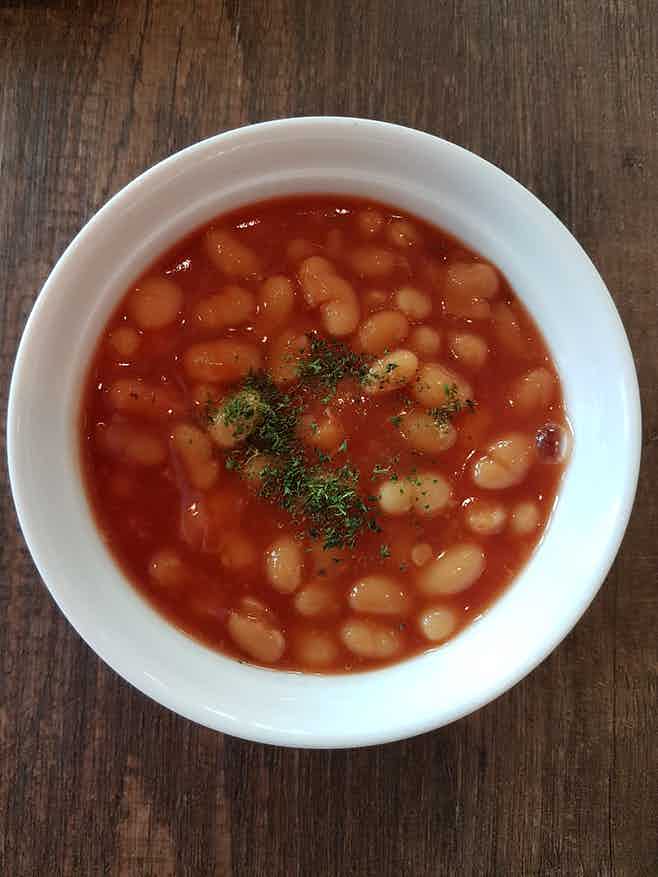 Choriatiki is a Greek salad. Like any salad, it is uncomplicated, although it tastes so much better than an ordinary salad. The Choriatiki is made with fresh tomatoes, cucumber, and feta cheese mixed in olive oil to deliver a healthy bowl of deliciousness.

Desserts in Greece can't get better than the Bougatsa. It has a golden texture and is made with custard wrapped in crispy phyllo. Melted butter, icing sugar, and cinnamon are sprinkled over the dish, giving it the perfect sweet touch.


Tips for Visiting Athens in June

Athens is a wonderful destination, but you must keep a few things in mind to make your journey memorable.

Even if you're in Athens for only 24 hours, you can still cover all of the major attractions! Take a look at our Athens in 24 Hours Itinerary. 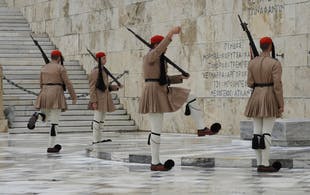 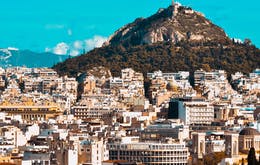 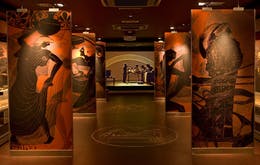 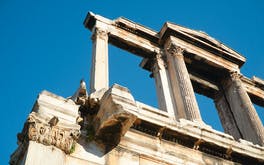 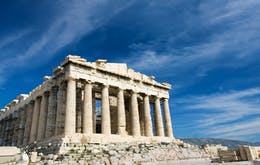 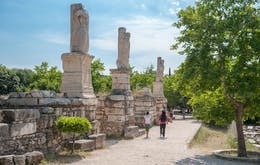 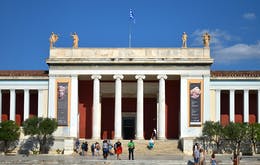 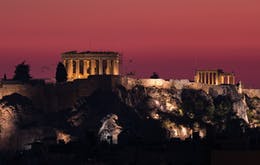 What is the weather like in Athens in June?

The weather in Athens in June is usually hot and sunny, with temperatures averaging around 27°C. However, it can be quite humid at times.

What is there to do in Athens in June?

What should I pack for Athens in June?

Be sure to pack light and comfortable clothing, as well as sunscreen, sunglasses, and a hat. If you plan on doing any hiking or walking, be sure to pack appropriate footwear. And don't forget your camera - there are plenty of photo opportunities in Athens!

What are the best events in Athens in June?

Some of the best events in Athens in June are the Athens Epidaurus Festival, Summer Plisskën Festival, and Athens Pride 2022.

What's the easiest way to travel within Athens?

There are many ways to travel within Athens, but the easiest way is definitely by bus. The city has an extensive bus network that covers all of the major areas and attractions. You can purchase a day pass for just 8 Euros, which allows you unlimited travel on all buses. 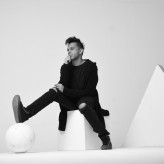