Fame is a shimmering illusion and a fleeting creature that every talented youngster hopes of finding. What happens when these dreams face a dead end? Do they shatter into dust or do they evolve into something more beautiful? Watch Rock of Ages to find out the lives of the artists and actors struggling to make their mark in Los Angeles in the 80s. Follow the lives of Drew, an aspiring rockstar, and Sherrie, a naive starlet, as they navigate the challenges of stardom. Their entertaining story with the backdrop of the best rock music from the 80s is what true live entertainment looks like on stage!

Rock Of Ages : About The Show

Rock of Ages is much more than a revue of Classic Rock songs, it is a moving narration of what happens when dreams meet reality. The musical has been one of the longest running shows on Broadway and this production is a celebration of the 10th Anniversary of the original production. It has several Tony Award nominations but more than that, it has been running full house on every tour!

The show is written by Chris D’Arienzo who has created an engaging story that twists and turns in giving us a glimpse of life in Hollywood in the 80s. The spotlight is ofcourse on the iconic soundtrack that includes songs from bands like Twisted Sister, Extreme, Foreigner, Mr. Big, Slade and Poison. You can find yourself rocking to hits like 'Every Rose Has Its Thorn,' 'The Final Countdown,' 'Don't Stop Believin,' 'We Built This City,' and 'Here I Go Again.'

Beyond the song and dance, the story goes deep into characters and sheds light on their motivations and dreams. The musical explores the travails of unexpressed love between Drew and Sherrie, the father-son relationship between the German developers filled with angst, and the desire of Regina and Dennis to save an iconic landmark beyond selfish personal motives. Watch Rock of Ages for an entertaining night full of surprises and great music!

Hollywood attracts young starry-eyed talents like moths to a fire! Rock of Ages is one such saga of dreams and aspirations and what becomes of them. The year is 1987 and the action is taking place in a bar called the ‘Bourbon Room’ on the Los Angeles strip in West Hollywood. The bar owner Dennis Dupree has turned the place into a haven for upcoming talents and stars and has become iconic.

Dennis is assisted in running the bar by Drew who has dreams of becoming a rock star and is just biding his time. Soon, Sherrie Christian enters his life and captures his heart. She is a young starlet who has run away from her home in the heartland and aspires to become an actress and works as a waitress meanwhile. They both have their tryst with fame as Drew auditions for the band Arsenal and gets selected, while Sherrie is lured by Stacee, the lead singer of the band.

Things start going downhill as Stacee abandons Sherrie and Drew isn’t happy with the kind of music they want him to make. They both are unable to express their feelings for each other and get swept away in the turmoil of their lives. The Bourbon Room is also under pressure of redevelopment by a German father-son duo and the City Planner, Regina, is trying to stop them.

Drew becomes a pizza delivery boy, while Sherrie ends up as an exotic dancer, and the Bourbon is on the verge of breakdown. Watch this intriguing story full of unexpected moments set to fantastic music only in Rock of Ages! 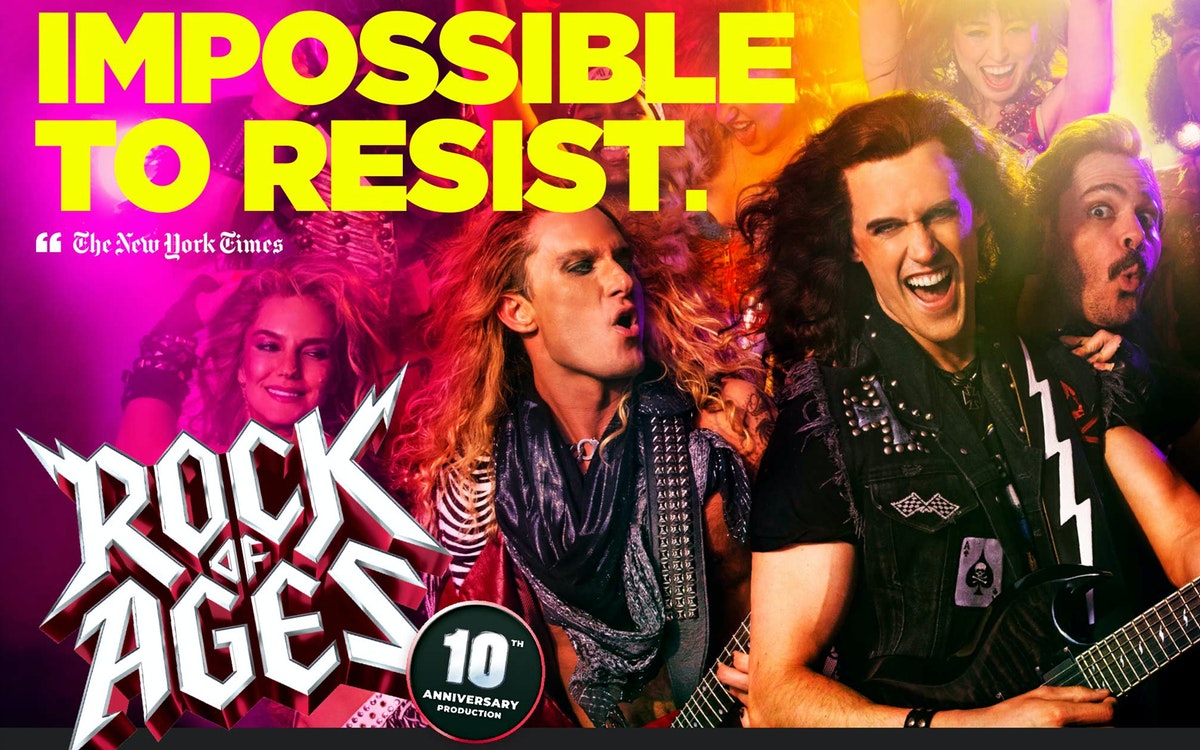 Duration
2 hours 15 minutes, including one intermission

Audience
Suitable for ages 14 and up. The show makes use of strong language. Children under the age of 4 are not allowed inside the theatre.

Seating
The New World Stages (Stage III) has a seating capacity of 499.

Have a look at the real-time seat availability and prices of different sections for Rock of Ages. In the interactive seat-map, select the date that you would like to watch the show and check out the seats available for that day. You can filter the seats as per your desired price range and purchase tickets directly.

Rock of Ages first premiered in Los Angeles in 2005 but has its Broadway premier in 2009. It then moved on an international tour and finally premiered in West End in 2011. For the last ten years it has been touring the world and performing in places like Toronto, Seoul, Brisbane, Manila, Buenos Aires, Akranes and Emmen.

“It's back and even better with Def Leppard spots.”
- NewsDay

“Rock of Ages is back in town for a 10th-anniversary run, and it’s time to get happily stoopid.”
- New York Times

Rock of Ages is performing at the Stage Three of the New World Stages in New York’s Hell’ Kitchen neighborhood. New World Stages is a five-theatre complex and Stage Three has a seating capacity of 499 seats. The theatre was opened in 2007 and has state of the art equipment for a true musical experience. Stage Three’s previous productions have been Avenue Q, Gazillion Bubble Show, Mimi LeDuck, and Modern Orthodox. There is a popular bar and restaurant within New World Stages called the Green Room. .

For those looking to book discounted Rock of Ages Off-Broadway tickets online, platforms like TodayTix and Headout are your best bet, as they source tickets directly from the box office and scour the internet for any discount codes available for these shows. Any price advantages are then passed on ensuring that you are paying the lowest prices.

The Headout advantage for booking Rock of Ages Off-Broadway tickets: