A link that we can now observe between all great monarchies of the world is that they have left behind some of the greatest architectural wonders for us to behold. Their buildings used to represent their might and ideals. They used to be the stronghold of their mental strength and political authority. And all grand historical monuments of the world are known for their ability to immortalize their heydays within their walls. The Hampton Court Palace in Richmond upon Thames serves this purpose for the erstwhile mighty House of Tudor. The symbol of sophistication during its time, Hampton Court Palace is one castle that you should not miss if you find yourself around London. 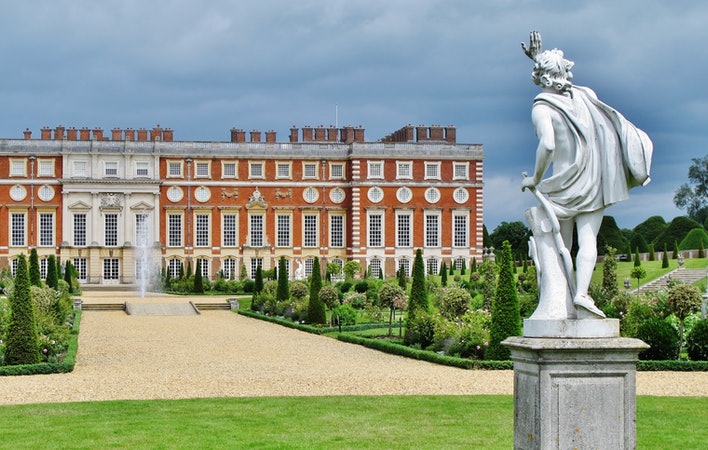 The current site of the Hampton Court was taken over by Thomas Wolsey, King Henry VIII’s chief minister, in 1514. He then spent a fortune to build one of the grandest castles in England in accordance with the renaissance school of architecture. However, very little of Wolsey’s original structures remain. In 1528, he transferred the ownership of the castle to king, Henry VIII who began rebuilding several parts of the castle as soon as he gained ownership. Hampton Court Palace saw through the end of Tudor era and the beginning of the Stuart era.

The Hampton Court Conference held in the castle was the one where King James’ Bible was commissioned. Henry III and Mary II went on another major rebuilding spree on the Hampton Court Palace. More than half of the grand structure was destroyed, altered and repurposed. Further refurbishment was undertaken by King George II and Caroline of Ansbach.

Where can I get tickets to Hampton Court Palace?

All Hampton Court Palace tickets come with a complimentary audio guide available in 9 languages ( English, French, German, Italian, Spanish, Dutch, Japanese, Russian, and Korean ) which you must collect from the Information Centre off Base Court once you enter the premises.

Going from London to Hampton Court

Distance from London to Hampton Court

The total travel time from London to Hampton Court Palace should not take more than 40 minutes. This means you have to spend less than 90 minutes on traveling back and forth, which gives you plenty of time to explore the vast castle and its numerous attractions.

Best Way to Travel from London to Hampton Court

You can get to Hampton Court Palace by taking a train from London. You may also avail waterways during the summer months and experience a breezy cruise on River Thames before getting to the Palace. Ideally, taking a guided tour from London to Hampton Court Palace is the way to go. Your travel to and fro is taken care of and you are in the company of an expert guide through the day. Doesn't get better! Alternatively, you may follow our highlights guide below and try to hit as many your schedule permits. The entire castle is bound to take you half a day to discover.

Hampton Court Palace went through several stages of construction and reformation. Therefore, three different schools of architecture makes its appearance within the entire complex. The earliest and the most popular one is mainly Renaissance inspired. Then comes the French style inspired Stuart era constructions, followed by the notably plain Georgian section. The castle has opened most of the structure for the public. There are exciting scheduled demonstrations to keep visitors of all ages interested throughout the entire day. Here's what you must see inside Hampton Court Palace: 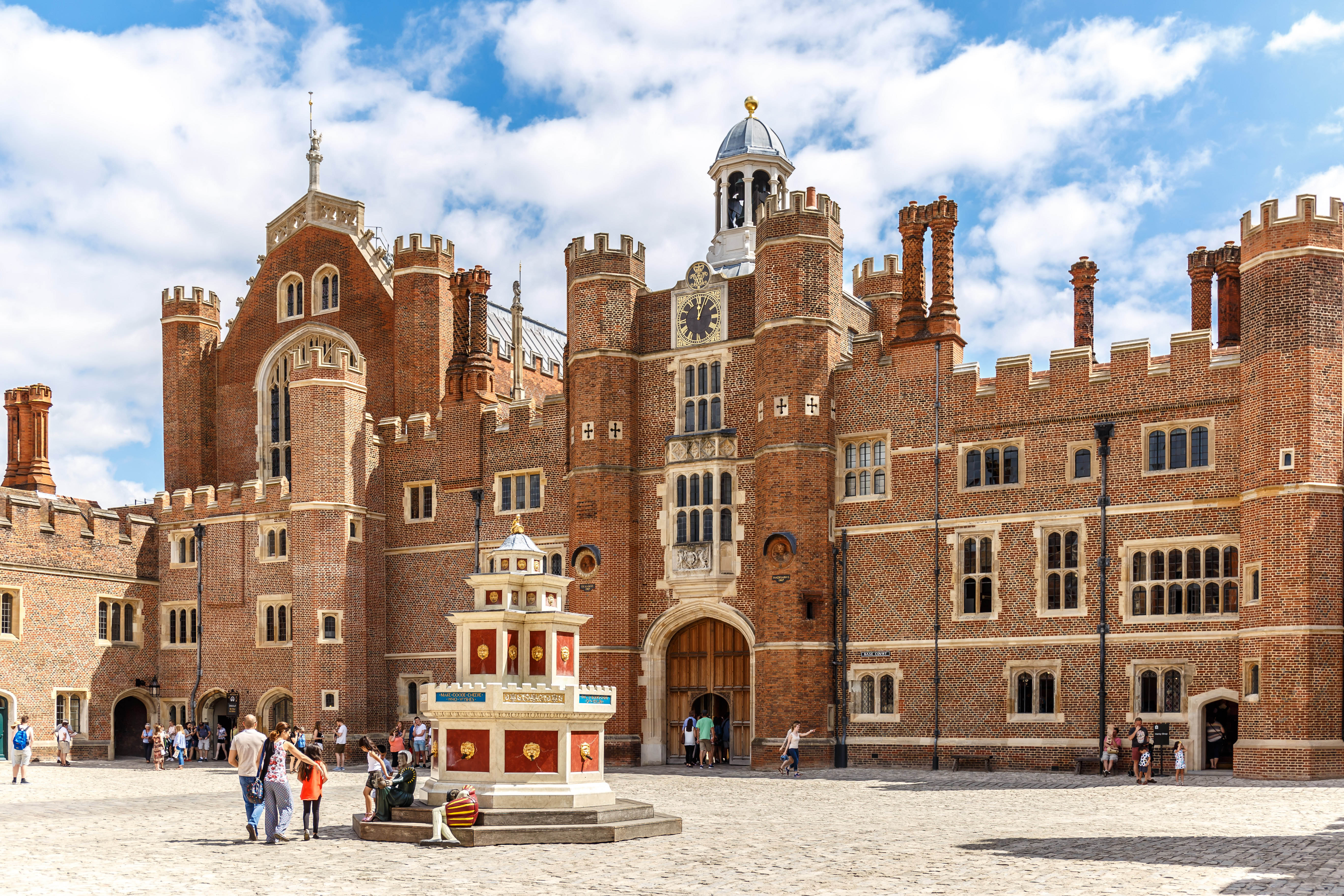 After taking over from his chief minister, Thomas Wolsey, Henry VIII spent a lot in reforming a living quarter of his own within the Palace. The entire area is well maintained and the audioguide will fill you in with information about day to day life of King Henry VIII and his court in this part of the Hampton Court Palace. The private apartments of William III and Mary II were used for entertaining guests, displaying prized possessions, and spending their off-court hours. Currently, William III’s dining has been laid out like he would do it himself back in the days. The centerpiece in William III’s closet was designed by Steinwich. The accurate representation of the apartment is sure to catch one’s eyes. The largest single room in the entire castle is also arguably the most stunning. Constructed during King Henry III’s phase of restructuring, the Great Hall features strikingly copious hammer beam ceilings. The Story of Abraham tapestries on the walls is believed to be the best work of Henry III’s times. During his stay, the King used the hall as a performance area as well. Henry VIII was known for his vast appetite and therefore encouraged the same in his court. His kitchen at the Hampton Court Palace used to employ 200 cooks, sergeants, grooms, and pages to prepare about 800 meals a day. Know in detail about the complexity of feeding a hungry Tudor court in this part of the palace. Another place of culinary significance is the Chocolate Kitchens. Built around 1690 by Christopher Wren for the use of William III and Mary II, the Chocolate Kitchen was a modern marvel of its time. Besides various equipment used to prepare delicacies out of chocolate, the Chocolate Room has a portrait of Grace Tosier, a popular figure during the heydays of the kitchen. Possibly the most elaborately decorated chamber in the entire castle, this closet remains the only remnant of Thomas Wolsey’s living quarters. The panels of the room depict “The Passion of Our Lord” that was commissioned by Henry VIII. The ceiling of the closet features classic Tudor architecture and it must not be missed. The Cumberland Art Gallery features a wide selection of artwork that is mostly a part of the Royal Collection. A vast majority of the artworks relate the history of Hampton Court Palace. The Cumberland Suite, originally created by William Kent, was restored in 2014 after years of exhaustive research. The Triumphs of Caesar Home to the largest grape vine in the world, the Hampton Court Gardens are the best place for a siesta should you get tired of exploring the inner chambers. The garden occupies 750 acres of sprawling land. The grape vines and the orange gardens keep the entire area alive throughout the year.

The Hampton Court Garden does its part to entertain the children with this attraction. The playground unites the element of fantastical beasts with the basic fun of enactment of scenarios. There are separate areas of the playground that are dedicated to myths, legends, and stories that are related to the history of Hampton Court Palace.

The first tennis courts were constructed at the Hampton Court Palace between 1526 and 1529. Later on, King Henry VIII used the courts for friendly games. One of the surviving courts dates back to 1625. Currently, you may visit the courts only during the summer. 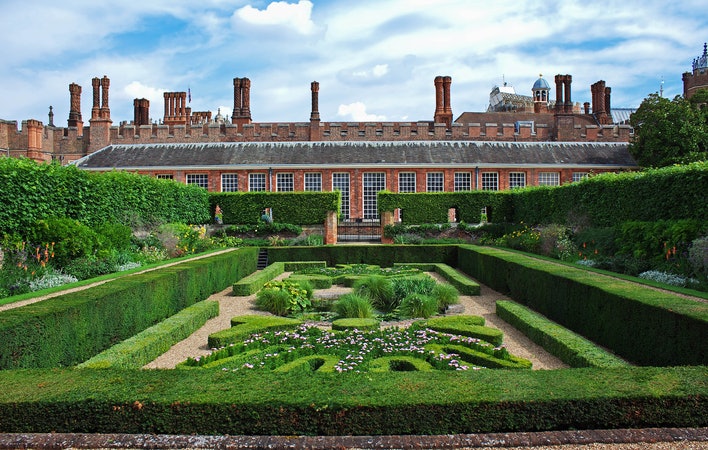 The Hampton Court Maze is one of the most exciting spots within the Hampton Court Gardens. This engaging and rather confusing structure is Britain's oldest surviving hedge maze and takes to the heart of adults and children alike. Planted by George London and Henry Wise for William III of Orange in 1690, the maze comprised of hornbeams then but in 1960, the 'Wilderness Garden' as it was nicknamed was replaced with yew. It is one of the first multicursal or puzzle maze, which makes it harder to find your way in and out of it.

The Hampton Court Maze takes an average of 30-45 minutes to complete, and though it is an ‘island maze’ which contains separate sections causing this technique to not normally work, the hedges are grown in a fashion where placing and keeping one’s right hand along a wall will lead them to the center.

A recent addition to the Hampton Court Maze is the audio exhibit - Trace. Spread across the hedges is a gentle “soundwork” composed of music fragments, snippets of conversation, the rustle of fine silks, and tantalizing laughter that disappears upon turning corners; aimed at luring visitors down certain paths, Trace is a permanent art installation that will eventually incorporate one thousand generated sounds.

The Chapel Royal is a working chapel that closes for religious services on Sundays and other religious days like Good Friday.

Getting To Hampton Court

Taxi drop off is available at the Palace gate. Taxis can be easily availed from Hampton Court Station.

Know Before You Visit

The palace is incredible with history covering several centuries of British history. Starting with Henry VIII and carrying on for at least two centuries. The insteriors are incredible and there is lots to see and do. The grounds are fantastic with the formal gardens and of course the infamous maze.

The entry price seems high, but when you realise how much there is to see - both inside and in the grounds - it's actually better value than many historical country houses. The gardens include both formal and informal, and include a decent place for food. There are several sets of rooms that illustrate the periods of Henry VIII and the Hanoverians, as well as some rooms used to display art. The audio guide really helps you to understand what you are seeing, and was included in the price. The kitchens are very extensive and we saw people demonstrating some historic dishes. All the staff seemed very knowledgeable and enthusiastic.

Where is the best place to park near Hampton Court Palace?

There are several car parks located near Hampton Court Palace, including the official palace car park and a number of public car parks.

Is there an annual Hampton Court Palace Festival?

Yes, the Hampton Court Palace Festival is held every summer and features a variety of musical performances.

What are the opening hours for Hampton Court Palace?

The opening hours for Hampton Court Palace vary depending on the time of year, but the palace is generally open from 10am to 4pm.

Is there a dress code for visiting Hampton Court Palace?

There is no formal dress code for visiting Hampton Court Palace, but visitors are asked to refrain from wearing overly casual or revealing clothing.

How long does it take to tour Hampton Court Palace?

Most visitors spend between 2 and 3 hours touring Hampton Court Palace. However, there is no time limit and you can stay as long as you like.

What can I see at Hampton Court Palace?

There are a number of things to see at Hampton Court Palace, including the State Apartments, the Chapel Royal, and the gardens.

Looking to explore other palaces in London? We strongly recommend the London Royal Palace Pass! If you're not interested in the pass, check out our detailed guides on other famous London Palaces and plan your visit efficiently. 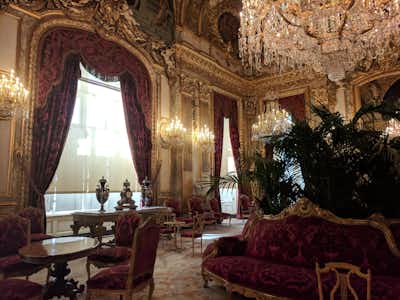 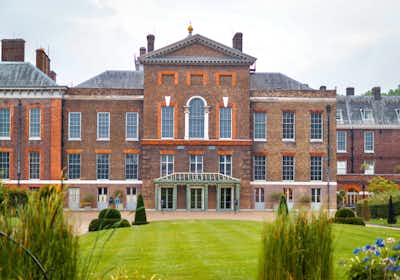 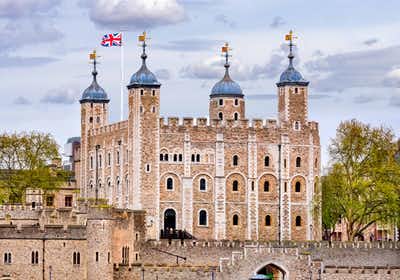