Exploring The Empire Of Death At The Paris Catacombs

Paris is renowned as the city of love to most. But, the city is also famous for its underground site of human remains stretching for nearly 2,000 acres. Known as the Paris Catacombs, this vast passageway resembles a labyrinth of tunnels and lies beneath the city. The remains of more than 7 million people are buried here and it extends southwards from Barrière d'Enfer ("Gate of Hell").

Although the Catacombs extend for about 800 hectares, only a small part of it is available for the public to explore. This small spooky adventure makes it to the top list of things to do in Paris that you must add to your itinerary. Here is all the eerie information about this less-talked part of the city that you should take note of before planning a visit.

Paris Catacombs In A Nutshell 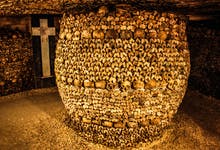 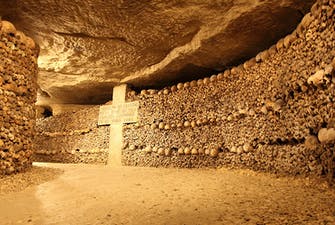 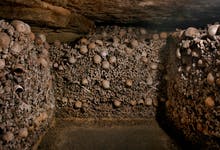 Why Visit The Paris Catacombs

The Catacombs of Paris is one of the most eccentric attractions in the city. Rightly nicknamed the Empire Of Death, the Catacombs were an escape for the city’s dead from the overfilled cemeteries in the 17th century. But the existing underground tunnels were already home to corpses from centuries ago, making it the most sophisticated and chilling grave to house 7 million dead.

The walkway itself is fascinating in a weird way enveloped by art made of skulls and bones. A barrel made of skulls, a well made of bones, and many interesting sculptures will dare you to admire them. This combination of a spooky, historic, and morbid yet fun haul makes for a memorable visit to Paris.

The underground ossuaries house the skeletal remains of more than 7 million Parisian corpses from the 5th to the 17th centuries. Since the cemeteries were overflowing in the 17th century, Louis XV banned all burials from occurring inside the capitol and instead buried them in the centuries-old underground tunnels. It took 12 long years to move the overburdened corpses under the city. Although there were bodies already buried from 1,200 years ago, the newer corpses piled up leading to extending the catacombs for 800 hectares.

During WW2, the French Revolution used the tunnels and led the liberation of Paris in June 1944. In 2004, a notorious underground group called Les UX illegally established a private theatre with a giant screen, seats, film noir decor, and a fully stocked bar. The horror film, As Above, So Below was the first movie to be shot in the catacombs in 2014.

While you can buy the tickets at the Catacombs ticket gate, you will also need to stand in long waiting lines as the Catacombs see as many as 1600 visitors each day. To beat the long queues, explore the spooky grounds of Paris with Paris Catacombs skip-the-line tickets which also include an audio guide that takes you through the past and present of the Empire Of Death.

What To See In The Paris Catacombs

Although the Catacombs are acres in area, you can only explore 2 km of it. Here are the highlights of this eerie escapade. A French army veteran by the name of Decuré who had spent time in Menorca created a fascinating exhibit remaking the Citadel De Mahon. The copy of the fortress was carved perfectly from memory by Decuré. Unfortunately, he died while building a staircase to the rendering and it is said that his ghost still haunts the sculpture. 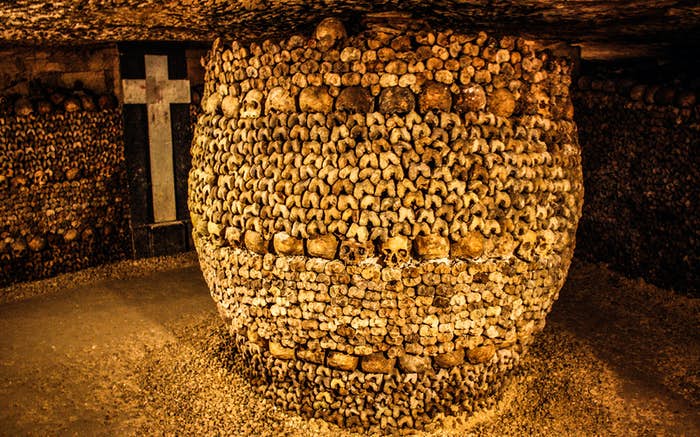 The Barrel Of Passion

Although unclear of its origins, the Barrel Of Passions, a barrel made of bones and skulls first came to fame during the illegal underground party in 1897. It is located in the center of the area called the Crypt of Passion. Right after the never-ending spiral staircase you’ll chance upon The Well. It was the first geological drilling done in Pars to identify the geological layers of the city. The most surprising discovery in the water at the end of the well cannot even be seen because of its clarity. For this reason, you’ll see the words ‘Bain de pieds des Carriers’ engraved on its wall which loosely translates to the foot bath of the Quarrymen.

Are Paris Catacombs Tours Worth Your Time?

Most definitely! Explore all of the above with an local guide who knows the dark alleyways and spine-chilling stories of the Catacombs like no other.

The entrance is located at 1, Avenue du Colonel Henri Rol-Tanguy (place Denfert-Rochereau), 75014 Paris. It is just located just minutes away from the bus and subway stops. You have 131 steps to go down to the catacombs and 112 steps to climb back up the entrance. The tour is a one-way circuit, so the entrance and exit are in different locations. The exit is located at 36 RUE REMY DUMONCEL 75014 and is close to Mouton Duvernet subway station. To learn more, read our comprehensive blog about Paris Catacombs entrance.

The best time of the day to visit the Paris Catacombs is in the evenings. Enter a couple of hours before the closing time (8 pm) to make the most of your visit, and skip the tourist swarm.

Restaurants Near The Paris Catacombs

After a spooky tour in the ossuaries of Paris, make sure you eat a hearty and tasty meal at these top-rated restaurants around the Catacombs.

Located just 100 meters from the Catacombs is Baladna, an authentic Lebanese restaurant. They serve freshly served Mediterranean, Middle Eastern, vegetarian, and vegan-friendly options as well. The ambiance is cozy and the staff is very welcoming.
Must try: Mezze, the soup, and chicken/beef skewers, brochettes

Denfer Rochereau-Indiana Café is a Tex-Mex restaurant and bar located just outside the Catacombs. You can grab anything from burgers to nachos. The ambiance is warm and has many artworks from native Indiana regions.
Must try: Chili, Taco Casserole

Contre-Allee is the people’s favorite MICHELIN star restaurant in the area and requires a reservation in advance. It is located only 200 meters from the Catacombs and serves delicious French and European delicacies. They also have vegetarian-friendly options.
Must try: Wild mushroom pasta, gazpacho

The Catacombs is located in southern Paris. The area is known for its green spaces and is covered with gardens such as Parc Montsouris, Parc André Citroën, and Parc Georges Brassens. There are plenty of museums such as Cartier Foundation for Contemporary Art, Musée de La Poste, Bourdelle Museum, and Gobelins Manufactory to name a few. It makes for a peaceful stay in the lap of greenery while in the city and there are a few hotels in the area that would make your time in Paris memorable.

Max Hotel provides comfort, convenience, and value to your stay with its top-notch amenities and service. The hotel has modern decor and meets all Parisian standards from food to service.
Distance from Catacombs of Paris: 0.7 km

If you are looking for a cozy yet luxurious stay, turn to Hotel Leopold. The suites are small yet comfortable and offer you a sip of luxury with their decor. The staff is friendly and accommodating. Don’t miss out on the breakfast buffet while you are here.
Distance from Catacombs of Paris: 0.7 km

If vogue is what you are looking for, look no further than Lenox Montparnasse. They offer air conditioning, a fully stocked bar, lockers, soundproof rooms, and private parking in addition to the modern amenities provided everywhere. The hotel is also pet-friendly, so you can bring your furry friends along.
Distance from Catacombs of Paris: 0.9 km

If you are in for a truly exotic experience with the taste of yesteryear’s France’s luxury, head to Hotel La Lanterne. This boutique hotel will remind you of old Paris with modern amenities. They offer truly exotic views of Paris from your windowpane and are only a stone’s throw away from attractions like Notre Dame Cathedral and the Pantheon.
Distance from Catacombs of Paris: 3.8 km

What is the story behind the Paris Catacombs?

The vast passageways resembling a labyrinth of tunnels lie beneath the city of Paris called Paris Catacombs. Since the cemeteries in Paris were overflowing in the 17th century, most of the remains were moved to the underground ossuaries. They now house the skeletal remains of more than 6 million Parisian corpses from the 5th to the 17th centuries.

Have the Catacombs of Paris been fully explored?

No, a large portion of the Catacombs still is unexplored.

How big are the Catacombs of Paris?

The Catacombs of Paris are 2000 acres large.

Why were the Paris Catacombs built?

The Catacombs of Paris were built to move the overflowing remains from the cemeteries of Paris in the 17th century.

Can you get lost in the the Catacombs?

There have been many cases of people getting lost in the Catacombs of Paris. It’s best recommended to stay close with your tour guide and follow his/her instructions while on tour.

Who is buried in the Paris Catacombs?

The centuries-old residents of Paris are buried in the Catacombs.

Do the Paris Catacombs smell?

Yes, the Catacombs of Paris have the odd smell of dusky old buildings.

Can you touch the bones in the Paris Catacombs?

No, you are not allowed to touch the bones inside the Catacombs of Paris.

Can you take a explore the the Catacombs by yourself?

Yes, you can buy a Paris Catacomb ticket with an audio guide and explore the catacombs by yourself.

Do you need tickets to see the Catacombs?

Yes, you need Paris Catacomb Tickets to see the Catacombs.

Are there tours available for the Catacombs?

Yes, there are many guided Paris Catacombs tours available.

Best things to do in Paris