Underneath the glamour and beauty of Paris lies an open graveyard with human remains going back centuries. Wait, it’s not as gruesome! A Paris Catacombs tour has been one of the most sought after experiences for tourists, a fact the legendary queue outside the entrance are testament to!

The Paris Catacombs are a network of tunnels and caves located beneath the streets of Paris, France. Since the 13th century, these tunnels have been used to bury the dead. The catacombs became a popular tourist destination in the 18th century, and today they are one of the most popular attractions in Paris. They're located in the Montmartre district of Paris, and stretch for about 650 kilometers (400 miles) and are 20 meters (65 feet) deep. The tunnels are divided into three levels, with the deepest level extending to a depth of 30 meters (100 feet).

Here's everything you need to know before booking tickets for a Paris Catacombs tour - is it really worth it?

Expert guidance while exploring the palace:

As one of the largest and most renowned cemeteries in the world, the Paris Catacombs offer a unique and fascinating glimpse into the city’s history. Guided tours of the catacombs are available, providing visitors with an opportunity to learn about the site’s rich history while avoiding getting lost in the massive network of tunnels. 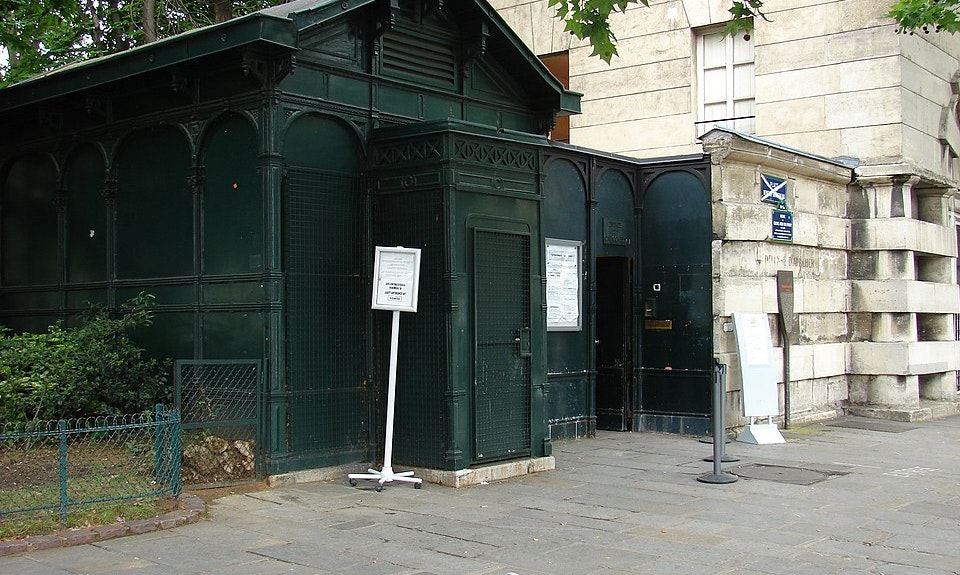 Skip the line tickets to Paris Catacombs are available for purchase online, and at the catacombs themselves. These tickets guarantee you entrance to the catacombs without having to wait in line.

Get exclusive access to areas of the Catacombs not open to the rest of the public as your guide leads you past skeleton-lined walls, as well as chambers and halls generally not seen.

Exploring The Empire Of Death At The Paris Catacombs

Here is all the eerie information about this less-talked part of the city that you should take note of before planning a visit.

Head directly to the entrance to enter a mysterious network of tunnels, 20 meters below the streets of Paris. These tickets give you access to bypass the 3-5 hour long ticket lines and directly join much shorter queues. You can also choose to get an Audio Guide with this ticket.

With your priority access ticket, you can avoid the long lines and go 20 meters underground to meet your professional guide. They will then lead you on an exciting 1.5-hour tour of some ancient burial grounds that are usually not accessible to the public. You'll get to see parts of the Catacombs that most people don't even know exist!

With your priority access ticket, you can avoid the long lines and go 20 meters underground to meet your professional guide. They will then lead you on an exciting 1.5-hour tour of some ancient burial grounds that are usually not accessible to the public. You'll get to see parts of the Catacombs that most people don't even know exist!

Descend into a mysterious network of tunnels, 20 meters below the bustling streets of Paris. Enjoy an hour-long cruise upon the calm waters of the Seine River, all with the same ticket. 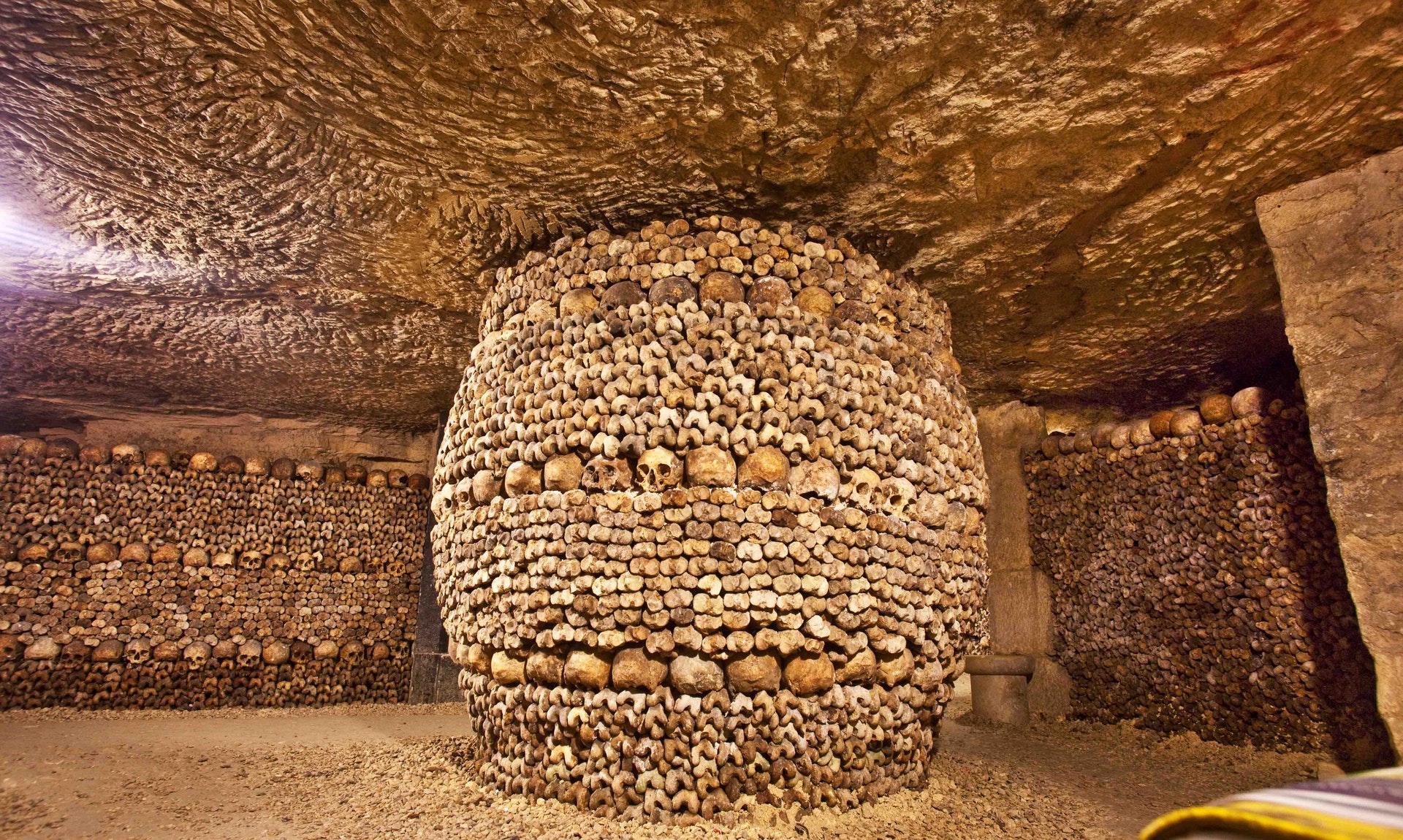 The Crypt of Passions

The Crypt of Passions at Paris Catacombs is a hidden room which can be accessed by a secret door. It contains the remains of many famous people who have been enshrined there. The crypt is said to be guarded by a spirit known as the Lady in White. She is said to haunt the catacombs and often appears to people who are lost.

The Port-Mahon Corridor at Paris Catacombs is a hidden gem that many people don't know about. This corridor was once used as a secret escape route for prisoners during the French Revolution. Today, it is one of the most popular tourist attractions in the Catacombs.

A ramp helps you to access the lower catacombs from the upper catacombs. In the suburbs of Paris, you may observe up to five levels of quarries. Many active galleries may be found in the lower catacombs near places like Montparnasse Cemetery, where skeletal remains are strewn across the floor rather than kept on shelves.

Decuré, a French army veteran who had spent time in Menorca and had studied the design of the Mahon Citadel, rebuilt it. Decuré's replica of the fortress was meticulously drawn from memory. Unfortunately, while constructing a stairway to the rendering, he died and is said to haunt the sculpture still today.

If you keep going down the spiral staircase, you'll find The Well. It was the first geological drilling done in Paris to identify the city's different layers. At the bottom of the well, there's water that's so clear, that you can't even see what's at the bottom. That's why there are words engraved on its wall that say "Bain de pieds des Carriers," which translates to "foot bath of the Quarrymen."

Are the Paris Catacombs Worth The Hype?

Simply put, yes! The Paris Catacombs are downright iconic when you think about all the work that has gone into their creation. The placement of each skull, every bone, the amount of planning required to make something of that scale, the massive length (300 kms!), and the perfection on display at every step despite the technological limitation of that time, all make the Catacombs of Paris the marvel they’re considered today.

A Paris Catacombs tour is (probably) one of the closest time travel-esque experience you’ll ever have. The maze-like halls of the Catacombs are lined with the literal and figurative skulls of the past, a reminder of how far humanity has come and the fact that we are all mortals at the end of the day. They are also a grim yet beautiful reminder of the rich history of the city and the events that have shaped the city like the French Revolution and Hitler’s regime. 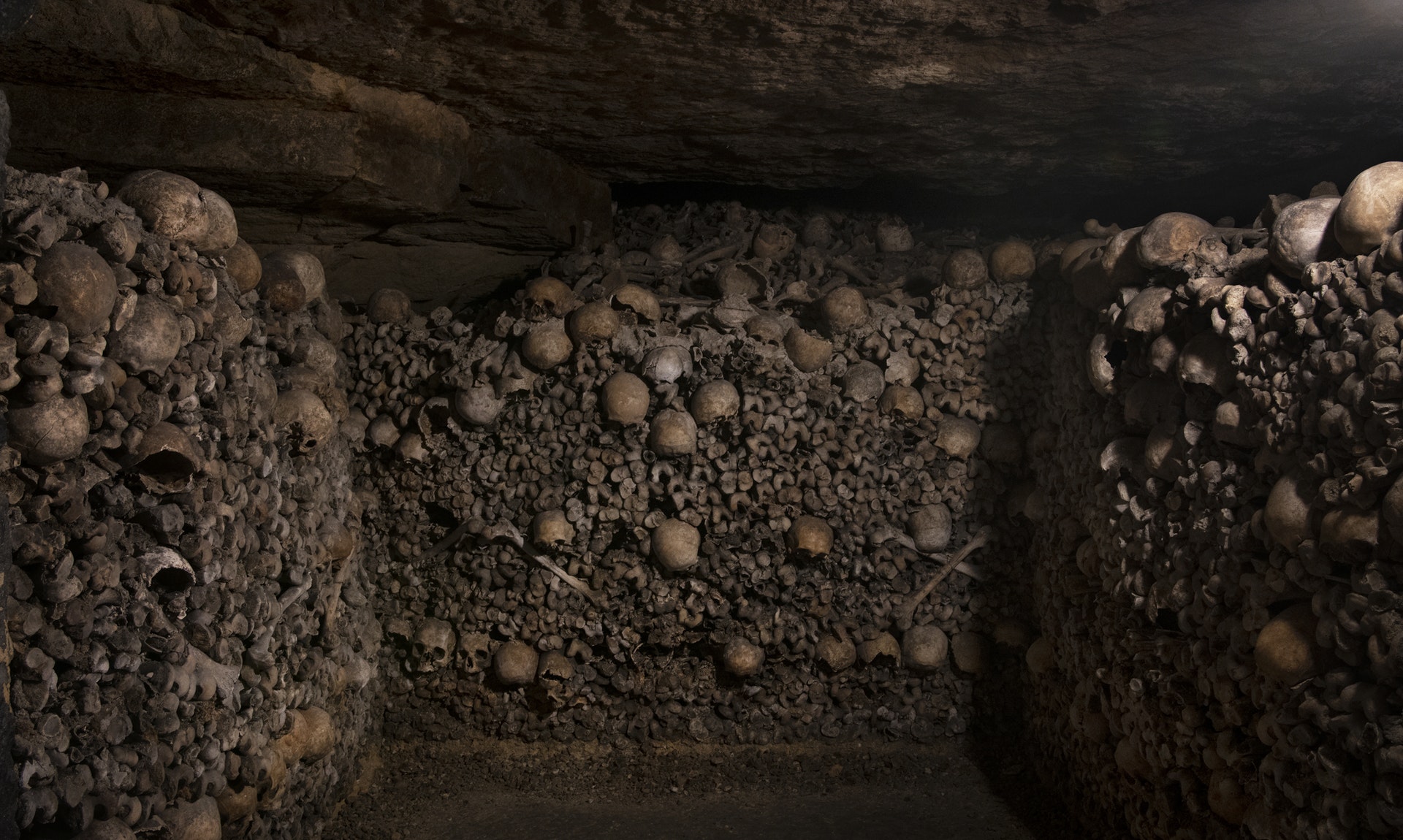 Why You Must Visit The Paris Catacombs?

Tale As Old As Time

It all began in the 18th century with most Paris cemeteries becoming overpopulated. With no place to bury the dead, what followed was a lot of open graves, improper burials, and unearthed corpses. Years of public outrage finally forced the government into action and led to the creation of the Catacombs.

In 1786, the Tombe-Issoire quarries were converted into what we now know as the Catacombs. Over the next two years, bones were transferred from the Les Innocents to the catacombs, and all subsequent burials occurred on the Catacombs. By the time the construction was finished, the winding tunnels had stretched a massive 300 km!

Paris Of The Past

Outside of being an archaeological marvel, where over 6 million dead people lay (peacefully?) under the City of Lights, the Catacombs are significant to the city in more ways than one.

The Catacombs were built on abandoned limestone quarries, which produced the stone used for building Paris. While a majority of the surface is covered with bones, there are small remnants of the quarries still intact, offering history enthusiasts a peek into the literal building blocks of the city of Paris. Another aspect that makes the Catacombs special is their significance in the evolution of Earth’s geology.

Related Read: 5-Step Guide On How To Skip The Line at Paris Catacombs

Closed on Monday and certain holidays: January 1, May 1 and December 25.

Great! Now you’re all set to visit the Paris Catacombs. Before you begin planning, here are some handy tips you’ll thank us later for:

Here are the top recommended things to do in Paris. Don't forget to check out our Paris Travel Guide for itineraries, tips and hacks to explore the best of Paris, curation of the best hotels, restaurants and more.

Save €5 on your first booking with Headout when you use promo code 'GOPARIS'!

Is it safe to visit the Paris Catacombs post-COVID-19?

What are the safety measures and guidelines in place at the Paris Catacombs?

In light of COVID-19, multiple health and safety measures have been enforced. It is mandatory that visitors wear masks that cover their nose and face throughout their entire visit; hand sanitizers have also been placed at the entrance for public use. Group tours have also been suspended temporarily.

Are the Paris Catacombs wheelchair accessible?

Due to the site being entirely underground, there is currently no wheelchair accessibility at the Paris Catacombs.

What are Paris Catacombs hours?

How long does it take to explore the Paris Catacombs?

To cover the underground stretch of about 1.5 km, guests can expect to spend at least 45 minutes to an hour at the Paris Catacombs.

Which is the visitor entrance at the Paris Catacombs?

Yes, they are available. You would need to specifically book Paris Catacombs tickets that provide skip-the-line access to bypass the long waiting lines.

How do I get to the Paris Catacombs?

You can either drive down, or take the metro, RER or bus to get to the Paris Catacombs. If you’re using public transport, you can alight at the common station: Denfert-Rochereau. From here, the Catacombs are at a mere 3-minute walking distance.

How many steps are there to go down to the Paris Catacombs?

There are 131 steps to go down to the Paris Catacombs, and 112 to climb back up near the exit.