Things to do in New York Broadway The Illusionists Broadway Reviews – The Review Round-Up!

Witness breathtaking magic this holiday season with The Illusionists - Magic of the Holidays. This special event stars The Illusionists who have previously thrilled New York audiences three years in a row with Turn of the Century, Witness the Impossible and Live on Broadway. Come November 29th and master illusionists will put together a family-friendly show with mind-blowing acts featuring close-up magic daring escapes, mentalism, and technological spectacle!

After shattering box-office records around the world, The Illusionists are ready to dazzle audiences with a brand new set of acts, right in time for the holiday season. For the entire 2 hours and 10 minutes, your eyes will be peeled at the stage as you try and make sense of the astonishing illusions and acts being performed on the stage. Playing for a limited engagement at the Neil Simon Theatre, The Illusionists - Magic of the Holidays is the perfect way to spend quality time with the family. The close is scheduled to close on January 5th 2020, so book your tickets in advance. 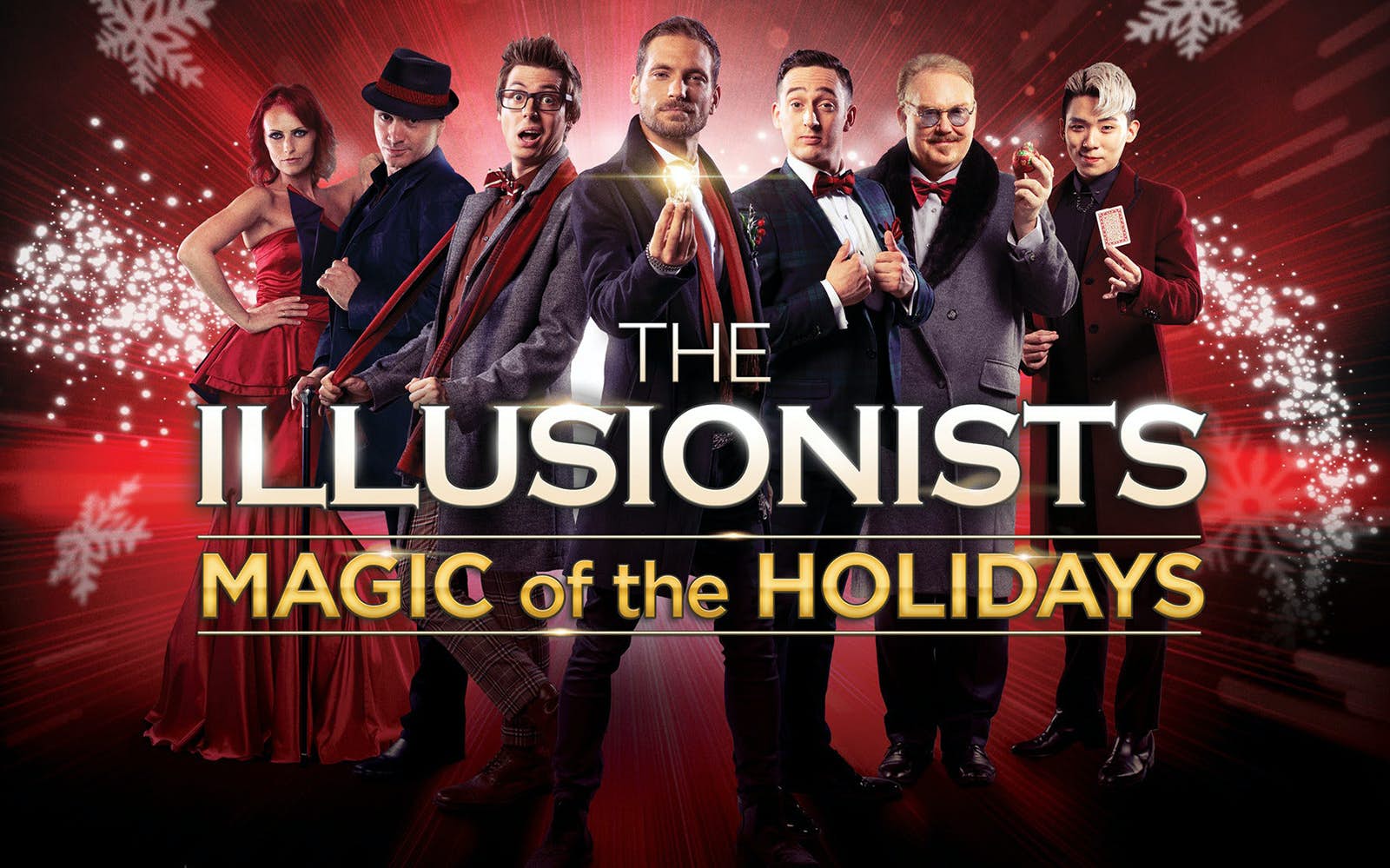 The Illusionists Broadway Reviews | What The Critics Think

Here are some of the popular The Illusionists Broadway reviews:

“Modern-day illusionists are basically performing the same tricks that have been a staple of the entertainment form for decades, only with new technological bells and whistles. What distinguishes the performers, aside from their skill, is the entertainment level they bring to their routines. On that front, The Illusionists — Magic of the Holidays more than delivers, even if its cheesiness factor is more redolent of Las Vegas than Broadway.”
- The Hollywood Reporter on the 2018 Broadway production

“Each performer has a specialty of sorts, and all are very good at what they do. The overall approach will be familiar to anyone who watches programs of the Got Talent ilk – fast moving, flashy visuals, loud music. Only thing missing is Howie Mandel – at least in person: Clips from the show occasionally pop up on large video screens. Perhaps the production’s greatest trick is that it never feels like a rip-off or a TV show padded out for Broadway prices. Even Shin Lim’s close-up card tricks play well."
- Deadline on the 2018 Broadway production

“The Vegas-style entertainment show “The Illusionists” has returned to Broadway in time for the holidays. Unfortunately this latest iteration, the group’s fourth appearance on Broadway, offers many tricks, but little magic. A flashy extravaganza on a world tour, the show is a revue on steroids that rotates headlining magic talent."
- Broadway News on the 2018 Broadway production

The Illusionists Broadway Reviews | Why You Must Watch The Show

Add some holiday spectacle to your Broadway experience this Christmas by attending a show of The Illusionists - Magic of the Holidays. Back in New York after incessant public demand, The Illusionists are ready to charm audiences all over again. Prepare your senses for extraordinary stunts performed by seven outrageously talented master Illusionists, each at the top of their game.

The cast of this holiday spectacular includes Dom Chambers (The Showman), Eric Chien (The Manipulator), Chris Cox (The Mentalist), Paul Dabek (The Trickster), Kevin James (The Inventor) and Enzo Weyne (The Unforgettable). The spectacular show is chock full of blink-and-you'll-miss-it sleight of hand, complex stage setups, and plenty of humor to keep the event joyous and without a doubt, an unprecedented amount of on-stage wizardry. Described by The Times in the UK as 'theatre's Cirque du Soleil", The Illusionists showcase magic on stage at a level never seen before!

A popular Broadway house located on 250 West 52nd Street, the Neil Simon Theatre has been home to one of Broadway's longest-running musicals; Hairspray. Built in 1927, the theatre was designed by Herbert J. Krapp for real estate mogul Alexander Pincus. The Nederlander Organization purchased the theatre in 1977 and renamed it after the legendary playwright, Neil Simon.

The Neil Simon Theatre has a total seating capacity of 1,362. These seats are spread across two seating sections, orchestra and mezzanine, making it one of the few Broadway houses to not have a balcony.

Orchestra Level: With 669 seats, the Neil Simon Theatre orchestra is the bigger of the two sections in the house. The seats are spread across 25 rows starting from A and ending with Y. The orchestra seats offer a generally good view of the stage, especially seats in the center rows.

Mezzanine Level: The only elevated level in the house, the mezzanine section has 627 seats in total that are divided into five subsections. The mezzanine has 19 rows of seats from A to T. The front two rows in this section are considered the best in the theatre in terms of the view offered.

Premium seats: If you're looking for seats that offer the best view of the stage, opt for the middle seats (107-110) in row A of the orchestra.

Apart from The Illusionists Broadway reviews, if you're looking for more Broadway information, here are some helpful quick links!