About The Show
Seating Chart
Reviews

Travel to a world beyond your imagination with the timeless classic, Slava's Snowshow. Created by one of the leading Russian performance artists of the 20th century, Slava Polunin, this highly entertaining clown show is the perfect watch for the holiday season. The show first premiered in 1993 in Moscow and then on off-Broadway in 2004, followed by a Broadway debut in 2008. Over the course of its premiere, the show has won many awards, including the Drama Desk Award for Unique Theatrical Experience, and was even nominated for the Tony Award for Best Special Theatrical Event.

Slava's Snowshow isn't a typical Broadway show in that it isn't defined or restricted by a plot. The show features several 'green' clowns and a single 'yellow' clown as they celebrate winter and snow with their hilarious antics. From gleeful clowns and bouncing balls to a blizzard of snow-like confetti after every ta-dah moment, Slava's Snowshow is unlike any other show with its winning blend of music and clown comedy. 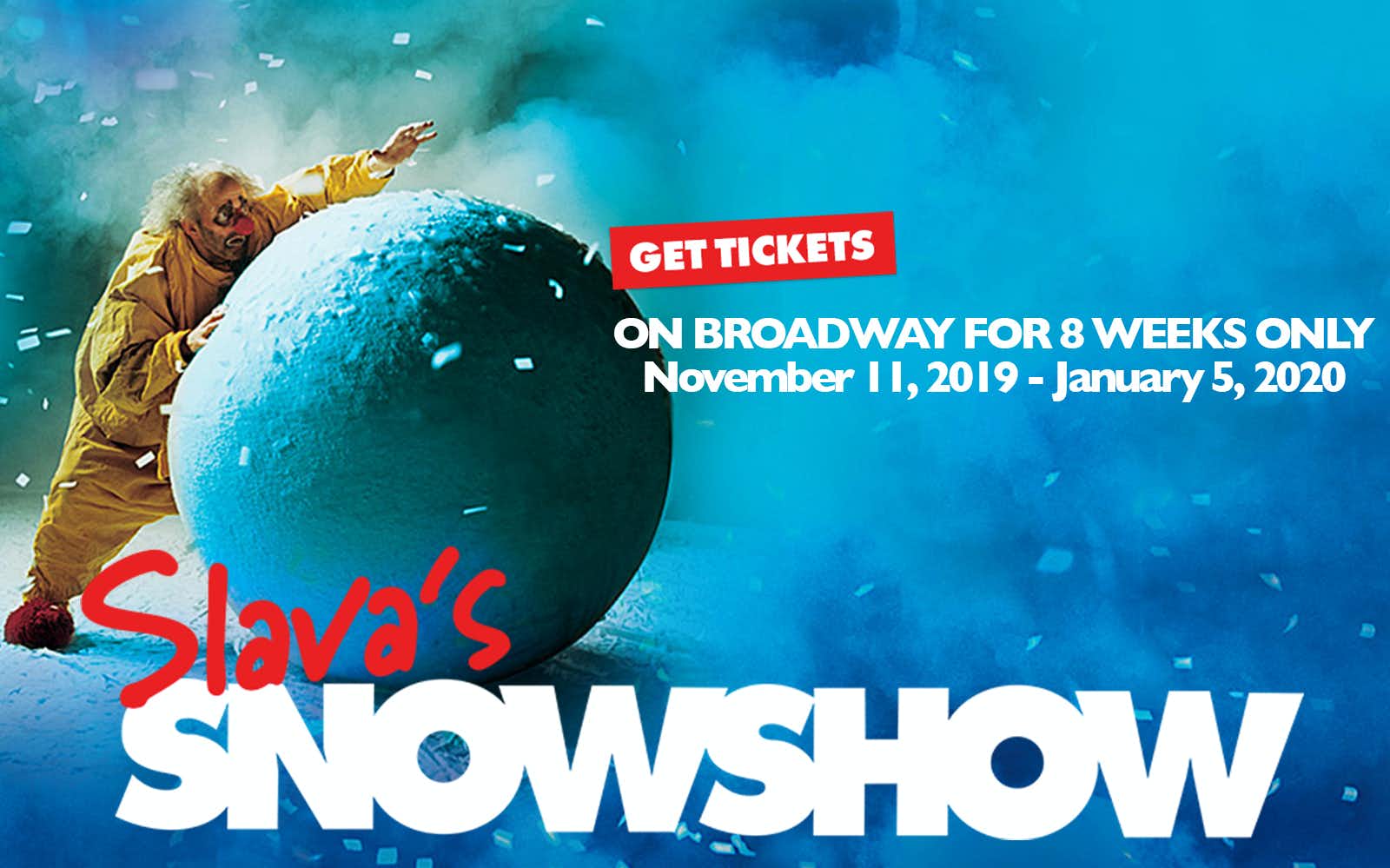 Here are some of the popular Slava's Snowshow Broadway reviews:

“The clowns—sometimes in yellow suits, sometimes in macs with huge, floppy hats—wander on and off stage, sometimes together, sometimes in apparent dispute, sometimes looking to us for something. They do funny walks and leaps, they make their bodies small, then suddenly stretch big. The simplest physical comedy is a delight. The sketches can be elaborate and simple. They can end dramatically, or quietly. Both the children in the audience and many adults audibly loved Slava’s Snowshow.”
- The Daily Beast on the 2019 Broadway production

“Slava’s Snowshow needs to be on the top of your holiday list of shows. It will remind you about the beauty of our world. About simple acts of love and kindness. It is the epitome of empathy, vulnerability, and childlike wonderment. The clown, the pantomime, is unsurpassable in their ability to surprise through what can only be described as magic in expressing the musicality of life, the beautiful singular moments in the everyday"
- New York Theatre Guide on the 2019 Broadway production

“A note to the clown-averse, who are legion, and to those who shudder at the thought of an interactive experience like Slava’s Snowshow, which opened on Thursday night at the Stephen Sondheim Theater: I did not expect to like it, let alone love it, as I did. Eons ago, when I saw Slava's Snowshow Off Broadway at the Union Square Theater, I bristled all the way through. I even hated the famous blizzard at the end. Now I don’t know what I could have been thinking. By the finish of Wednesday night’s preview performance, I was as relaxed as if I’d just had a massage — though a massage doesn’t, generally speaking, blast paper-confetti snow down your top that you’ll have to scoop out later."
- The New York Times on the 2019 Broadway production

Slava's Snowshow Broadway Reviews | Why You Must Watch The Show

Slava's Snowshow is a wonderful break from everyday life with its larger-than-life imagery, stellar performances, and an expertly designed stage with great props and masterful special effects. Unlike other shows on Broadway where you have to sit and process everything you watch, Slava's Snowshow allows you to sit back, relax and take a deep dive into the fantastical world created by Slava Polunin.

Polunin took inspiration from Charlie Chaplin and Leonid Engibarov and combined that with his own decades-long experience as a clown to create Slava's Snowshow. Beautifully capturing the spirit of contemporary circus, Slava's Snowshow features both classic and modern compositions along with plenty of innocent humor, making it an instant classic. The show is making its way to the Stephen Sondheim Theatre for a limited engagement starting from November 11th, 2019 and ending on January 5th, 2020.

Originally named the Henry Miller Theatre, the Broadway venue was renamed in honor of the legendary Stephen Sondheim in 2010 in a bid to commemorate his invaluable contribution to theatre and Broadway. The theatre is located at 124 West 43rd Street and features a Neo-classic style created by architects Paul R. Allen and Ingalls & Hoffman. In its century-long existence, the theatre has hosted numerous iconic productions including Cabaret, Anything Goes, Bye Bye Birdie, Beautiful: The Carole King Musical and more.

The Stephen Sondheim Theatre has a total seating capacity of 1055. These seats are primarily divided across two sections, orchestra and mezzanine, along with some box seats.

Orchestra Level: With a seat count of 669, the orchestra section is almost double the size of the mezzanine. There are 21 rows in this section, from A to U and three subsections, left orchestra, center orchestra, and right orchestra. Most of the seats in this section offer pretty decent views of the stage, except the extreme corner seats and seats in the last few rows.

Mezzanine Level: A relatively smaller seating section, the mezzanine has 349 seats in total and is the only elevated section in the theatre. There are only 9 rows in the mezzanine from AA to JJ but the view offered is pretty decent across the board. Avoid seats in the last couple of rows though, because they are the farthest from the stage and don't offer a great view.

Value-for-money seats: Seats in rows H to L in the center orchestra and rows CC to EE in the mezzanine.

Apart from Slava's Snowshow Broadway reviews, if you're looking for more Broadway information, here are some helpful quick links!