Everything You Need To Know About Public Transportation In Rome

Rome is a big city. Unlike other great tourist cities in Europe where attractions are usually concentrated in the city center, or in surrounding neighborhoods; the landmarks of Rome are spread out throughout the city. If you wish to see everything that Rome has to offer, or visiting landmarks which you know are spread about, then the Roman public transportation system is definitely the friend you need. Here's a quick guide on all you need to know about public transportation in Rome.

The public transportation system in Rome - metro, buses, trams & trains in the urban areas - are managed by ATAC and you can check out their handy Rome public transport map here. What makes this even better is the fact that all these services use the same type of ticket. You don't need to worry about purchasing a different ticket for each service. These tickets are easily available throughout Rome at tobacco shops, automated ticket kiosks at metro & bus stops and news stands. The ticket options you have are:

Remember, the ticket will not have the date stamped on it. When you validate it for the first time on the bus/metro/tram, the ticket will be stamped with the time of activation, and will also mention the time of expiry. It is up to you to get the ticket validated using the machines present in the front and back of the buses, as well as the trams and metros. If you do not validate your ticket and are caught using it, you will be fined heavily. ATAC personnel polices the buses, Metro and trams occasionally for people riding without tickets.

Getting To Rome From The Airport

Rome has two airports. The main airport is called the Fiumicino Airport and is located by the coast, 32km south-west of Rome. The other airport, Ciampino is mainly for low cost budget carriers and is much closer to the city that Fiumicino.

From Fiumicino Airport to Rome

Fiumicino is Rome’s main airport for domestic and international flights and is well connected to the city. It has four terminals, numbered 1,2,3, and 5, not 4. Your options of getting to Rome's City Center from the Fiumicino Airport are:

By Train
Trains offer the fastest and cheapest way to get to Rome from the Fiumicino Airport. The train station is located outside terminal 3 and there are two types of train services that will take you to the city, Leonardo Express and the Sabina-Fiumicino FL1 line.

The Leonardo Express runs every 30 minutes from the airport and takes 30-35 minutes to get to Termini Station, Rome's central train station. From Termini, you can catch the two Metro lines or take a bus to any part of the city. Tickets are priced at €14. So if there's three or four of you, you're better off taking a cab.

The FL1 line leaves every 15 minutes (30 minutes during holidays) from the airport and is cheaper at €8. It's also more convenient as it stops at Trastevere, Ostiense, and Tiburtina stations, some of Rome’s more popular neighbourhoods. By Cab
Since 2012, all cabs from the Fiumicino Airport to the City Centre charge a flat rate of €48 (this fee includes four passengers and all bags ). This ride will take around 45 minutes. This flat rate applies only to destinations within the Rome city ring, meaning withing the Aurelian walls. For destinations outside of it, you will be charged as per the meter. You can find these cabs at all the 4 terminals outside Fiumicino. You can also book single seats in shared cabs and enjoy a comfortable ride to the city. Save €6 on your first booking with Headout when you use promo code: GOROME

From Ciampino Airport to Rome

Ciampino is Rome’s second airport and is located closer to the city than Fiumicino. Being the smaller of the two airports and lesser serviced, transportation options are limited to vehicles only and there are no train services from Ciampino to Rome.

By Bus
Similar to Fiumicino, you have the options to take an SIT BUS Shuttle or a Terravision Bus from the airport to the city.
1. Terravision buses go from Ciampino airport directly to Termini station.
2. SIT Buses are similar to Terravision, with the same destination (Termini). By Cab
All cabs from the Ciampino Airport to the City Centre charge a flat rate of €30. This fee includes four passengers and all bags. You could also book single seats and get driven straight to your hotel. 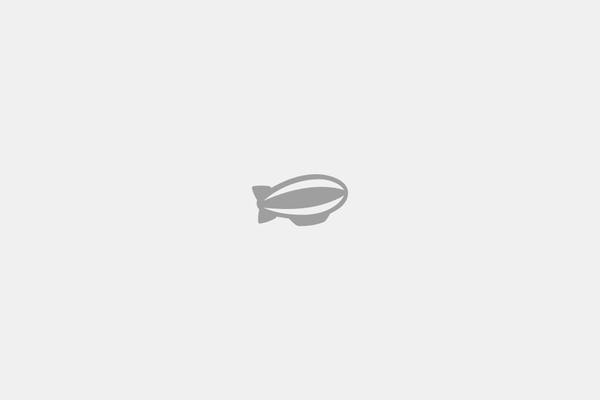 There are three major Metro lines: A , B , its B1 branch and the new C line. Lines A and B cross each other at Termini Station while line C hasn't reached the city centre yet.

• Line A runs past the Vatican and has convenient stops - Termini, Barberini, Fontana di Trevi("Trevi Fountain"), Spagna("Spanish Steps"), Piazza del Popolo, and the Vatican Museums ("Ottaviano - San Pietro - Musei Vaticani").
• Line B runs past the Colosseum but also splits into the B1 branch at the "Bologna" stop which then goes on to "Jonio" station. Stops on Line B include Tiburtina ("Tiburtina") and Termini train stations, the Colosseum, Circus Maximus, Circo Massimo, along with Testaccio and the Ostiense/Roma Porta S. Paolo train stations, the EUR district and the catacombs of S. Agnese ("S. Agnese/Annibaliano", on the B1 branch).
• Line C runs from Montecompatri (just outside Rome) through the city's suburbs to the Appio district. At present, it is not yet connected to the rest of the Metro network. 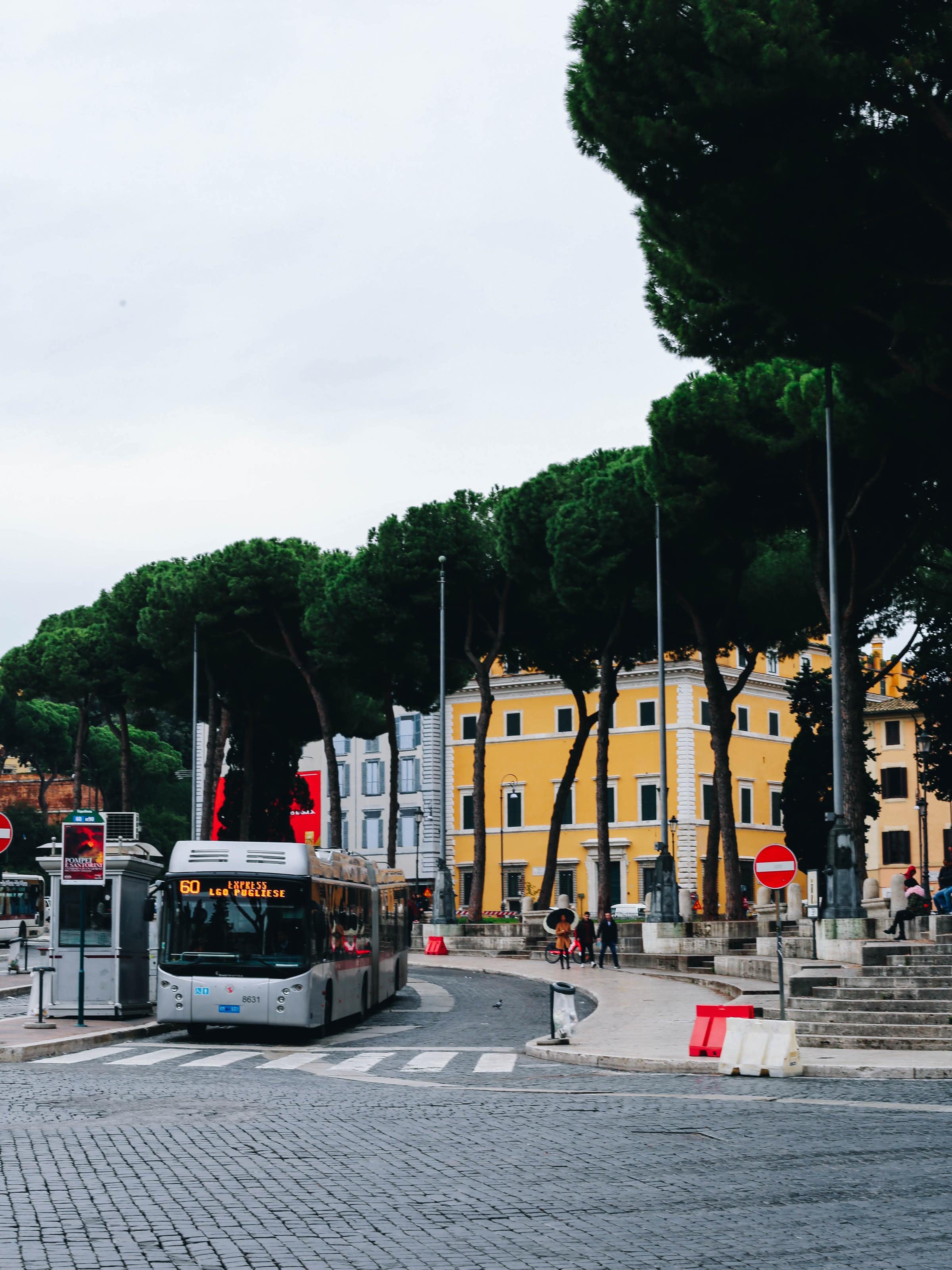 Buses in Rome are reliable, but often crowded. They offer an extremely efficient way of getting around the city, given you have a proper bus route map and an understanding of how to read the maps and the routes. You can find one ATAC's official bus route map here. Bus stops on these maps tend to be marked by tiny numbers. You can trace a route by connecting the “dots” of each number. Some bus lines have frequency of 10 minutes while lesser popular lines see frequencies of up to 30 minutes.

All these services - bus, metro & tram - utilise the same form of ticket. One ticket to rule them all. 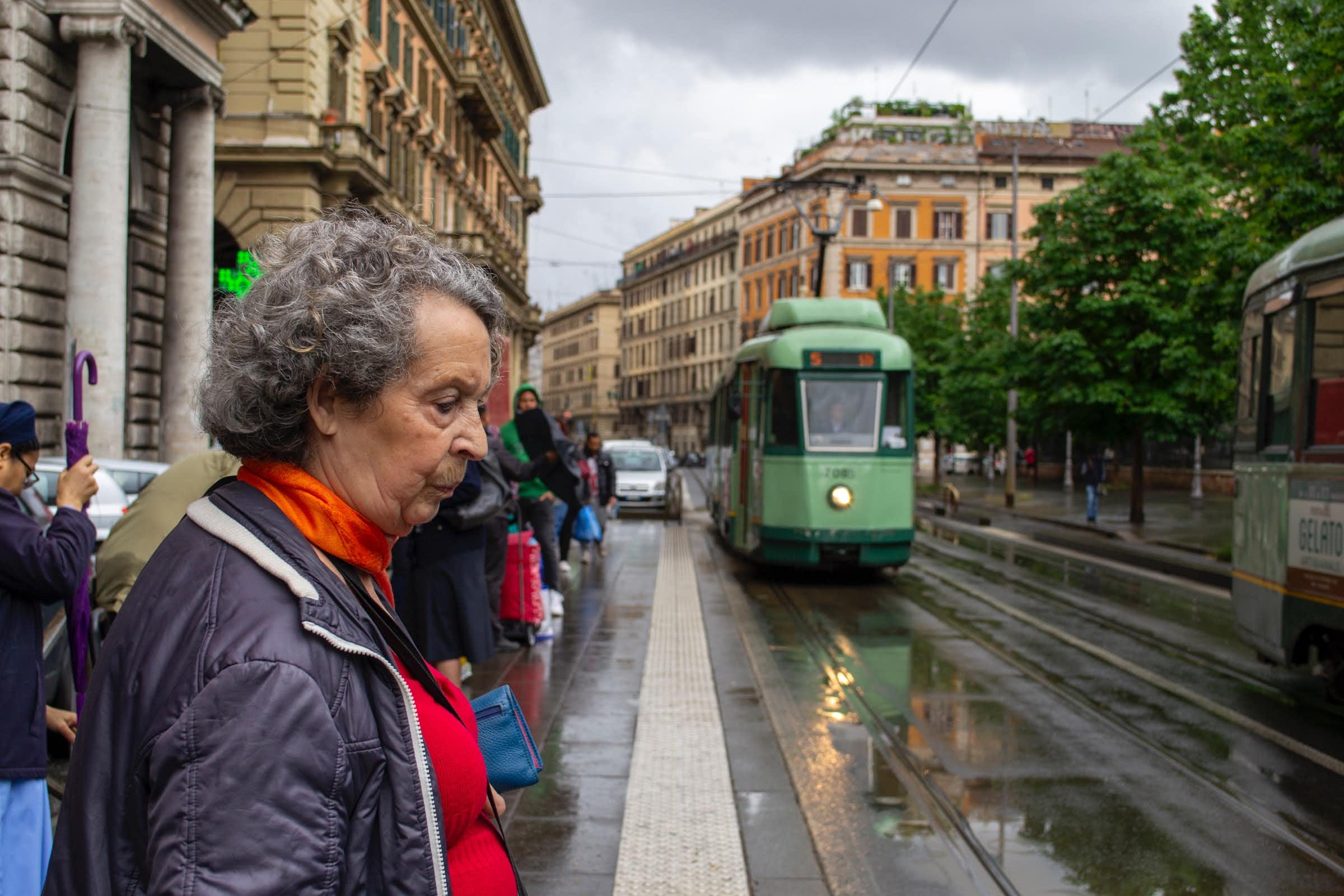 An old network of suburban trains operates within Rome and uses the same ATAC ticket as the other forms of public transport in Rome. Almost resembling the old trams, these are pretty antiquated. The lines are:
• The Roma-Centocelle line connects the city centre with Porta Maggiore.
• The Roma-Lido line connects Testaccio with Ostia Antica.
• The Roma-Nord line connects the city centre with the Parioli district and Viterbo. Note that ATAC tickets only cover the urban stretch of the route within Rome and this ends at the "Sacrofano" train station. To continue further, you need a dedicated ticket. 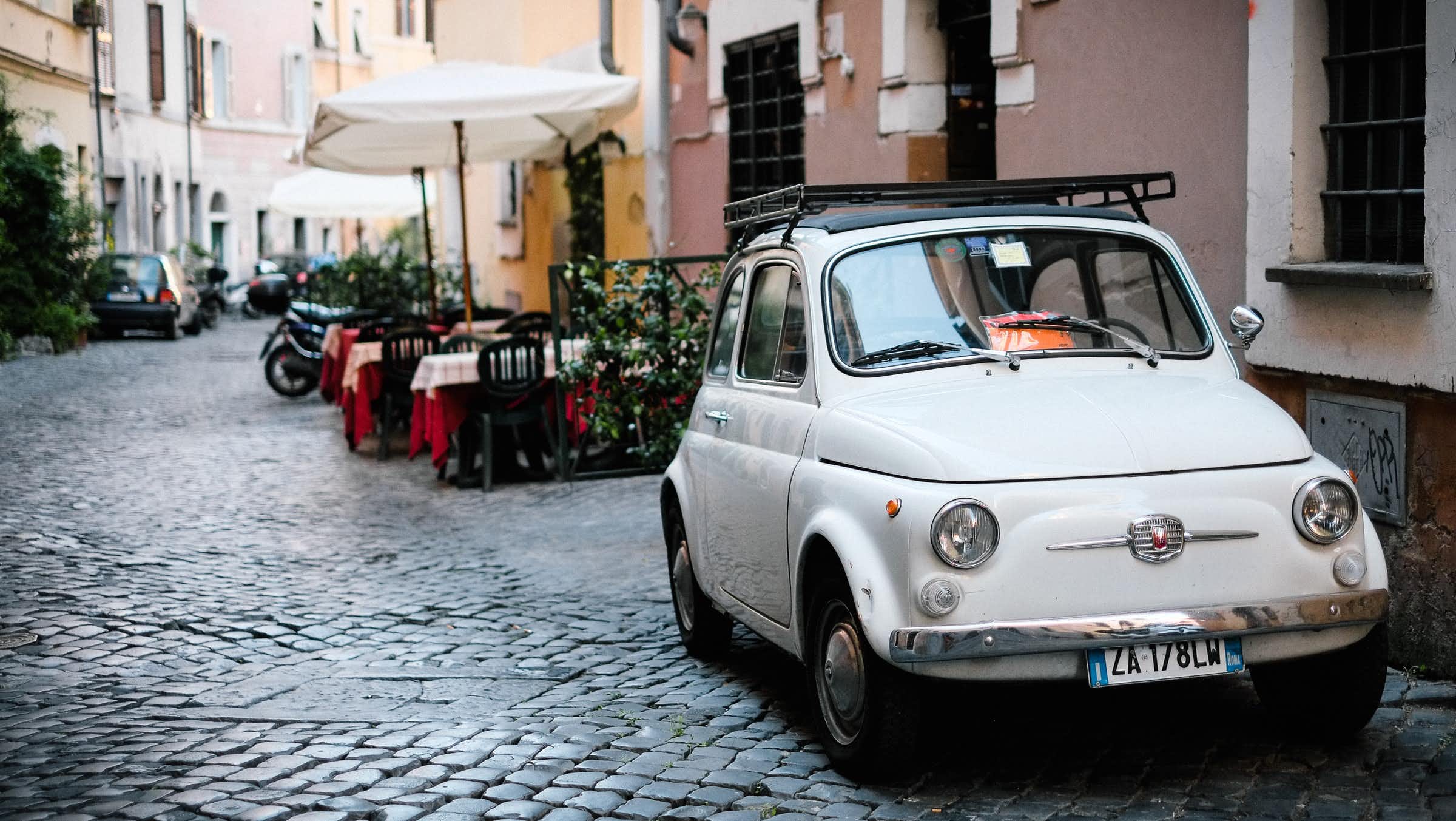 Like any other major city in the world, taxis and cabs are abound in Rome. You can catch a taxi anywhere in Rome - taxi stands are spread throughout the city. Remember that you can only board one at a stand and can't hail a cab standing on the side of the streets. Taxis are expensive but also quite convenient. Their rates can be calculated using a standard taxi fare calculator. You can check out one here.

If you're visiting Rome for more than a day, consider the Roma Pass. It costs €28 and gives you priority access to over 40 museums and monuments along with free public transportation in Rome. This includes all trains, buses, metros and trams. You can choose between 2 & 3 day options and the pass is valid for 8 months from purchase. If I were visiting Rome as a tourist, this is the pass I'd go for to solve my travel and sightseeing needs. • Priority access to over 40 museums and monuments
• Free public transportation
• 2 or 3 days pass options
• Valid for 8 months from the date of purchase.

Save €6 on your first booking with Headout when you use promo code: GOROME 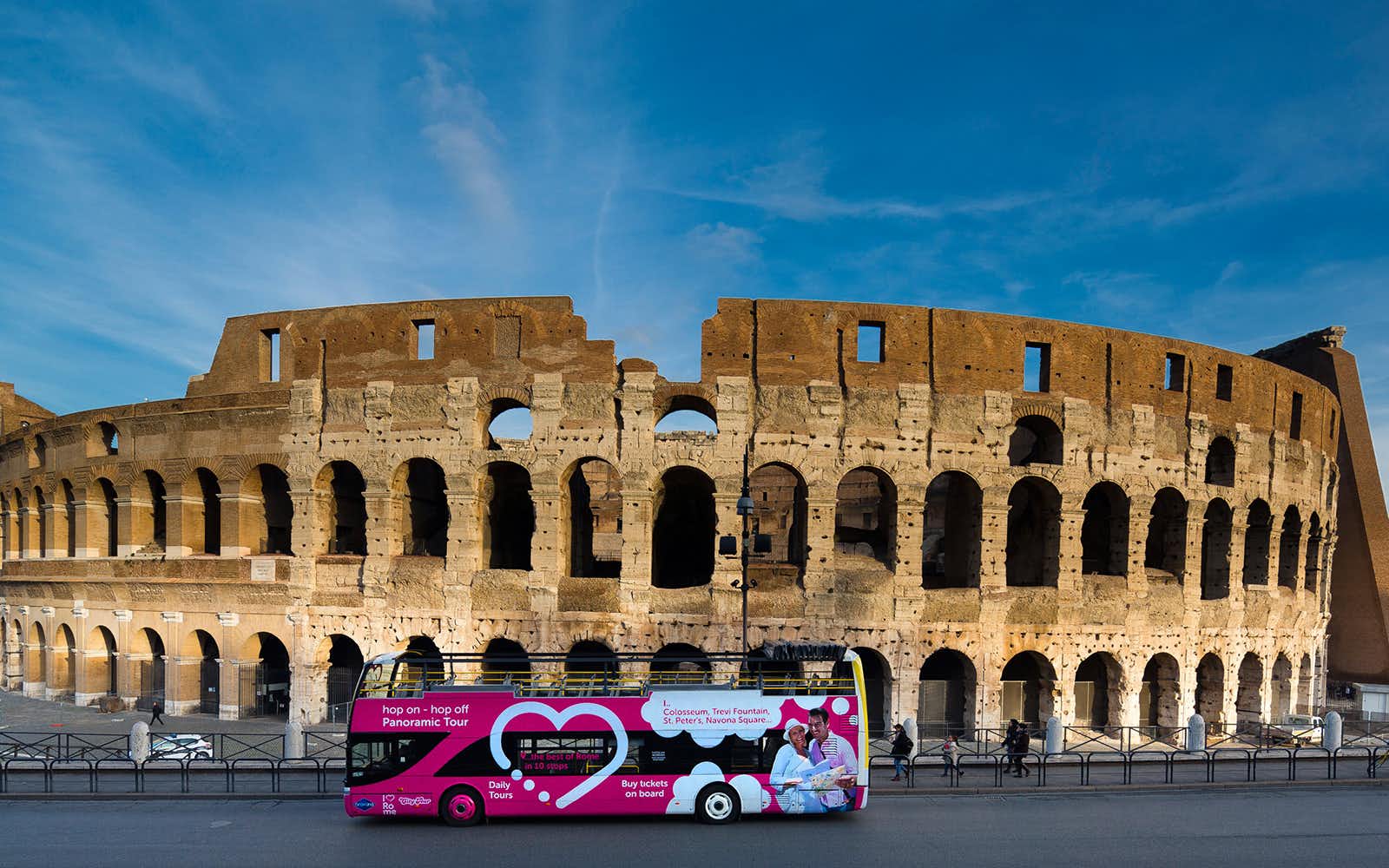 Hop-on-hop-off buses in Rome are perfect for tourists visiting the Eternal City. Not only does it take care of getting around from one major attraction to other, you also have free wifi, audioguides on you go and the option to get up and get down anywhere you like.

• Santa Maria Maggiore - Visit the ancient Basilica and explore the Church of San Pietro in Vincoli nearby. The church is home to Michelangelo's Moses.

• Colosseum - Walk through the ruins of the Colosseum, Roman Forum and the Palatine Hill.

• Trevi Fountain - Throw a coin into the Trevi Fountain using your right hand and over your left shoulder, your wisht to return to Rome will be guaranteed.

• Via Ludovisi & Via Veneto - Head to the Spanish Steps, Trinità dei Monti, Piazza del Popolo and the Borghese Gallery. Save €6 on your first booking with Headout when you use promo code 'GOROME'!