Discover the Opulence of the Hall of Mirrors Versailles

Things to do in Paris Hall of Mirrors Versailles

Palace of Versailles is Now Open

The Versailles Palace is a royal château located in the Île-de-France region, and an absolute “must-visit” site for tourists. This attraction is of prime historic importance, as evidenced by its position on the top world heritage sites. For over a century, this palace represented the ideal royal residence in Europe with its commendable architecture, worked on by a group of talented sculptors, decorators, and architects. Bedecked with 700 rooms, one could spend days lost in the cultural depth that the palace houses. Each room is accentuated by the frescoed ceilings and intricate designs, only adding on to the aesthetic appeal. So, how is one to sift through the entire palace? Go straight to the most popular of them all: the Hall of Mirrors Versailles. 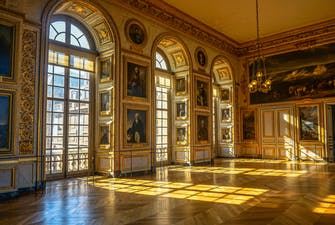 When one thinks of the Palace of Versailles, one immediately thinks of ornate gardens, magnificent architecture, and exquisite decoration. If it had to be described in a word, it would be 'royal', because nothing says luxurious the way the Palace does. However, one of the most opulent parts of this extremely grandoise Palace is the Hall of Mirrors Versailles. Bedecked with mirrors throughout and overlooking the lush gardens of the palace, the Hall of Mirrors just cannot be missed when in Versailles!

Save € 5 on your first booking with Headout when you use promo code 'GOPARIS'!

What Makes The Hall of Mirrors Versailles Special

Many claim that the true opulence of the Palace of Versailles is depicted through its central gallery, the Hall of Mirrors. Renowned as the most important room of the Palace, the Hall of Mirrors houses 357 mirrors that overlook the gardens through arcaded windows. Visitors are often enticed by the serene beauty of it all, but what's exciting for most people is that they get to walk in the very hallway where once the French royal family strolled.

The highlight of this hall are the mirror-clad arches (all 17 of them). Each arch contains twenty-one mirrors (adding up to a total of 357), which are fixed within marble pilasters. These arcs signify the political importance of the country, as they illustrate the symbols of France. Undoubtedly, this work of art was successful in projecting the power of the French monarchy at the time.

Fun fact: The Hall of Mirrors was actually the grand setting for multiple royal ceremonies during the 17th and 18th centuries, but more importantly was where the Treaty of Versailles was signed in 1919. In case you’re wondering what that is, it was the Treaty that ended World War I.

Hall of Mirrors was constructed in 1678 by a dedicated group of 30,000 workers who toiled day and night to create the majestic palace that we see today. The gold-framed windows were designed particularly to let in “heavenly” light through the panes, while providing a magical view of the lush gardens. Here's what's interesting: Back in the 17th century, when the Hall was being constructed, it was decided that all the construction should be French. Given the the Hall of Mirrors required mirrors, this posed a bit of a problem. Back in the day, Venice had a monopoly on the manufacturing of mirrors. The French convinced some Venetian artists to come to France and start manufacturing this rare commodity. Nothing says 'opulence' like a 75-meter long ballroom with 17 huge mirrors on one side, and arcaded windows on the other, overlooking the formal gardens. A visual treat, the Palace was also the home for various other historically significant elements. For instance, the gilded bronze capitals on the arcs include the fleur-de-lys. Sadly enough, most of these elements are no longer present in the Hall of Mirrors, as they were lost during war for various reasons (financial reasons being at the top of the list). Some of the other signigicant pieces were silver table pieces and the guéridons. Interestingly enough, these were melted by order of Louis XIV.

Visiting on a rainy day did not dispel the 'shine' of this amazing piece of history! The stunning decorations, statues, ceiling paintings and views from the windows give a mere glimpse of the glittering life of French Court in its hey day! Along with all the other areas to visit and wander, this was a highlight of our Paris Adventure. Not to be missed.

There are over 370 mirrors in this hall which is 75 metres in length. It has been extravagantly decorated and furnished. A visit here is highly recommended.

The Hall of Mirrors Versailles remains closed on Mondays. For rest of the week it opens at 9 AM, and closes at 5:30 PM.

It is very easy to get to the Versailles Palace from Paris:

Train: Line C of the RER regional train system from the centre of Paris (Champs de Mars, Invalides, Musée d'Orsay, etc.) to The Versailles Château Rive Gauche station. This just takes a 10 minute walk to the Palace from this station.

Bus: 171 of the RATP system runs between Pont de Sèvres and the Palace of Versailles.

Tips on Visiting the Hall of Mirrors Versailles

Plan Your Day Trip From Paris to Mont St. Michel
Day Trips From Paris To Champagne: A Comprehensive Guide
Visiting Paris In September – The Definitive Guide
Visiting The Stunning Palace of Versailles : How To Make The Most Of Your Visit
Discover The Adventures of Asterix and Obelix With These Parc Asterix Paris Tickets
How to Skip the Lines at the Eiffel Tower – Your Guide to Bypassing the Long Queues