The Noël Coward Theatre has been a West End institution since 1903. The theatre originally opened as the New Theatre, and was later named Albery Theatre; and finally, in 2006, it was renovated and renamed the Noël Coward Theatre after the famous British playwright and actor. With a history of over 115 years, the Noël Coward Theatre London has seen its share of remarkable productions including ‘Oliver!’, ‘Children of a Lesser God,’ ‘Ducktastic,’ ‘A Christmas Carol,’ and ‘Million Dollar Quartet.’ 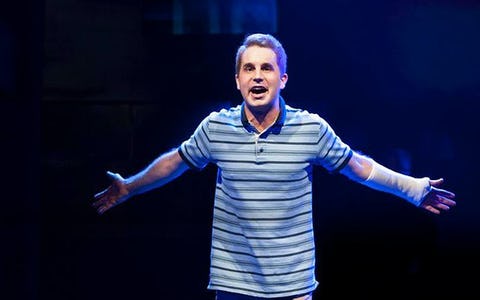 Dear Evan Hansen, a Tony-Award winning musical on Broadway, has always been known for striking a chord with young audiences. The protagonist of the show is a teenager with social anxiety issues, a completely relatable bloke. It made its Broadway premiere in December 2016, and received acclaim from both audiences and critics. Songwriters Benj Pasek and Justin Paul, collaborating with writer Steven Levenson are behind the story and music of the show. Michael Greif, a three-time Obie Award winner and four-time Tony Award nominee, is set to direct the West End edition of the show.

Evan Hansen, a 17-year old, finds it difficult to connect with anyone around him, including his mother Heidi. The only source of positivity in his life apparently is the love he has for Zoe, who hails from the wealthy Murphy family. With the world failing to acknowledge Hansen's existence, he gets Zoe's brother Connor to sign the cast bundling his broken arm. Hansen becomes the centre of everyone's attention when Connor commits suicide. How will Evan respond to this unexpected turn of events? Watch Dear Evan Hansen to find out.

The Noël Coward Theatre has accessible entry through a ramp in the front door on St. Martin’s Lane. Box M also has 2 spaces for wheelchair users or 1 wheelchair user and a companion. The Royal Circle can accommodate 2 wheelchairs, transfer seating is also available in any of the seats in the Royal Circle. The Wheelchairs are stored in the cloakroom and guests are requested to ring in advance for the facility.

Assistive Listening System: The theatre has 20 infrared headsets and can be collected from the Foyer.

Bar: The Noël Coward Theatre has 3 bars on the Stalls, Royal Circle, and Balcony levels. Access customers can be served drinks in their seats.

Cloakroom: There are cloakroom facilities at the Noël Coward Theatre.

Guide dogs: Guide dogs are welcome at the theatre; the staff is also willing to dog sit while patrons enjoy the show.

1. Round Table: A traditional British Pub perfect to catch a round of pre-show drinks.

2. Steak & Co: A treat for meat-lovers, Steak & Co. serves up the best steak, and has an exclusive pre-theatre dinner menu for a quick meal.

4. Le Garrick: Serving French cuisine, this restaurant is often voted among London’s most romantic restaurants, and is ideal for a post-show date.

5. Koha Restaurant & Bar: A favorite of theatre-goers, Koha is best known for its classic European dishes.