Immerse yourself in the heart of a Catalan Modernisme masterpiece — Casa Mila, also known as La Pedrera which translates to ‘The Quarry’. The nomenclature was inspired by the wave-like design of the stone exterior.

Built in 1912 by Antoni Gaudi, Casa Mila is a work of art come alive with its ripple-like facade and a surrealistic sculptural rooftop. From the marvelous recreations of the interiors of the Pedrera apartment from the early 20th century to the Espai Gaudi exhibit, explore each nook and corner of this artistic masterpiece with Casa Mila guided tours!

Interested in visiting but can’t pin down the right Casa Mila guided tour for you? Let us help you with a brief walkthrough:

Advantages of a Casa Mila Tour

Sail right past the long queues at the entrance of the UNESCO World Heritage site, Casa Mila, with your priority access. This priority access will help you use a special entrance to skip the hassle of waiting in a long line and begin exploring the surreal architecture at the earliest.

An artistic masterpiece such as Casa Mila houses an ample amount of stories and history, and details regarding the inspiration, process and creation of this poetic architecture. An expert guide makes the process of exploration furthermore delightful by uncovering and unraveling the history and stories hidden in this building as you make your way through it. 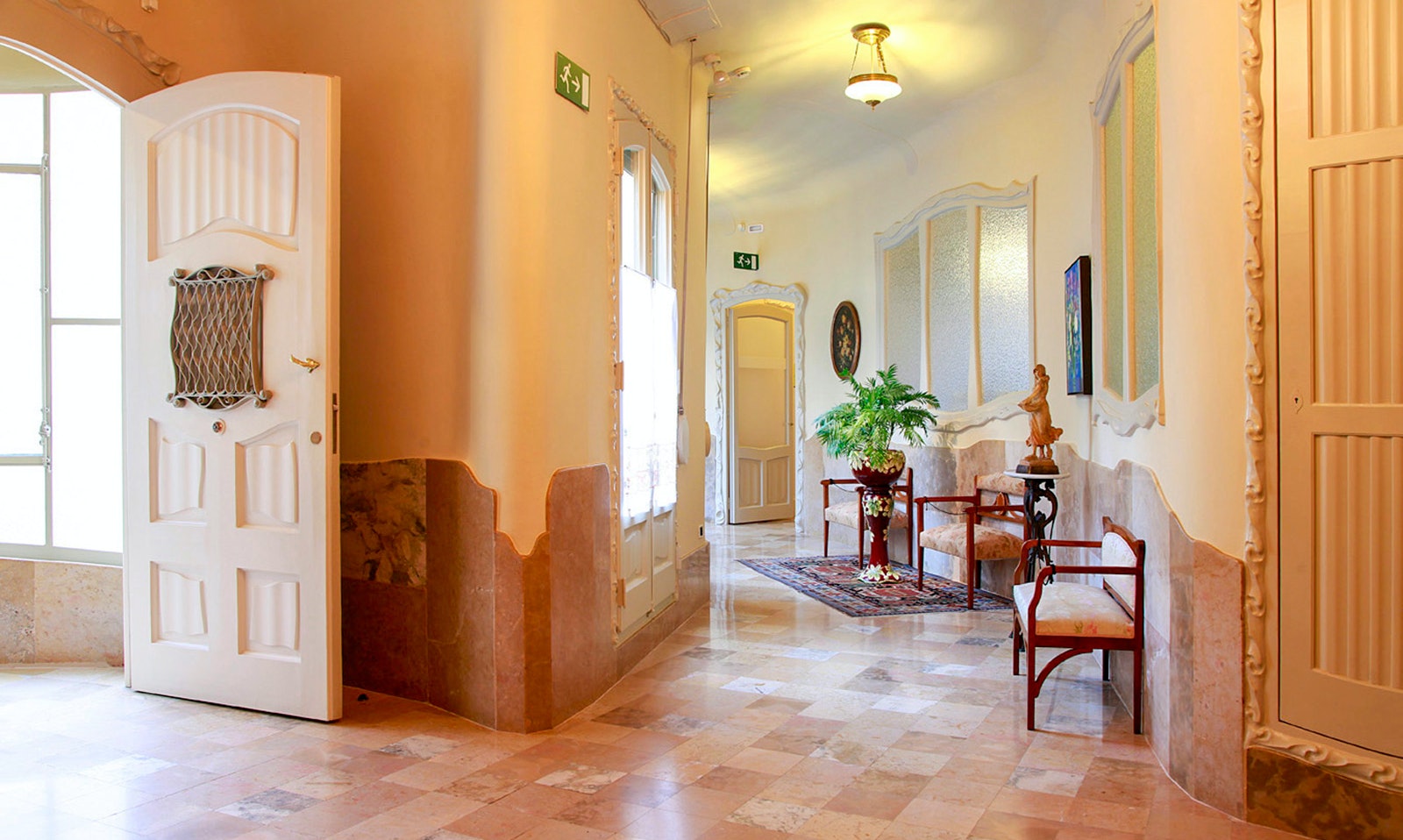 There is nothing more exciting than discovering hidden secrets in history and Casa Mila is home to some of its own secrets. Experience the exclusivity by peeking into the hidden secrets of Casa Mila which is generally not available for the general public. This includes numerous additions that Antoni Gaudi brought into La Pedrera — The Flower Courtyard, The Warrior Rooftop, The Whale Attic and more.

Exclusive early access: Enter before the general public does

Ever imagined what an architectural marvel would look like without the hustle bustle of overflowing tourists, surrounded by just serenity and a glimpse of history? This is where exclusive early access tickets come in. Take a gander at the history of Casa Mila before the city comes to life and the building is packed with tourists.

Before choosing your tour, take a look at the main features of each type of tour and then make an informed decision. Here’s a list of all your Casa Mila tour options and their highlights.

Be the first to enter La Pedrera and explore this architectural marvel without the hassle of overflowing tourists. Traverse through the 5 floors, assisted by an expert guide, before the city wakes up and enjoy access to different areas of the building which are not open to the general public such as the Warrior Rooftop, the Flower Courtyard and the Butterfly Courtyard.

Take a thrilling tour through the attraction and discover the hidden secrets at this masterpiece, areas which are closed off to the general public. With an expert guide through your journey who will share stories, history and hidden secrets of La Pedrera, this exploration will never fall flat! Visit the incredible exclusive areas such as the Whale Attic, the Tenants’ Apartment and more.

Witness La Pedrera in a beautiful transformation under the night’s sky with access to the exclusive and unique light show after the building closes for the day. Watch the magical architecture take a marvelous shape in the light show and participate in the dreamy audiovisual displays on the surreal rooftop, an absolute sight to behold!

Move straight past the long lines and waste no minute in beginning the tour of the Moderniste marvel built by Antoni Gaudi — Casa Mila, also known as La Pedrera. This ticket not only allows you to skip the hassle of long queues, but also provides an audio guide supplemented in 5 languages for detailed information about this unconventional building which sparked quite a controversy back in the days.

What’s better than seeing the top attraction of Barcelona? Seeing two top attractions of Barcelona with a combo that goes easy on your pocket! Park Guell, Casa Batlló or the Barcelona Aquarium, pair your trip to Casa Mila with an additional stop at one of these most popular spots in the city with our specially curated combo tickets and audio guides that will give you the lowdown about all these attractions at your own pace. 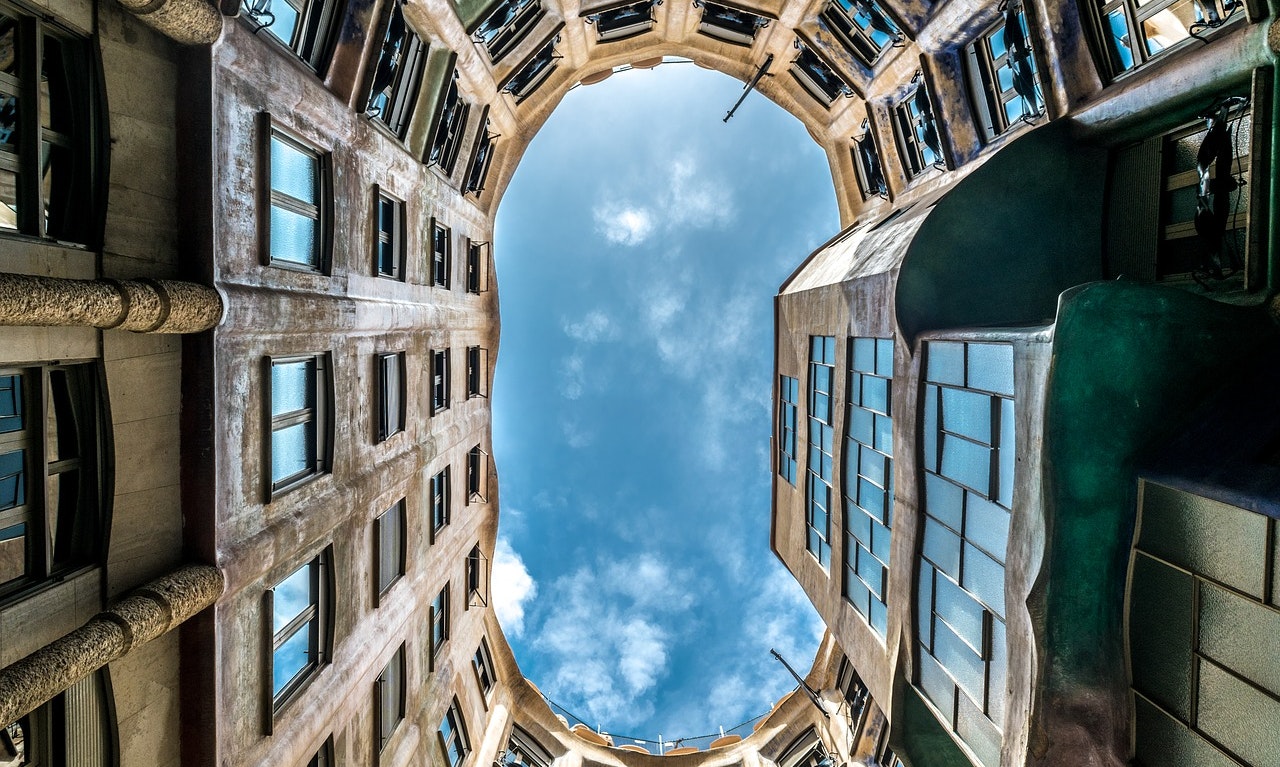 Finished in 1912 by Antonio Gaudi, Casa Mila — also known as La Pedrero or ‘The Quarry’ for its surreal wave-like structure on the exterior — is the most beautiful building in Barcelona and was named after the family that commissioned Gaudi to create it. As you walk inside the foyer, the striking interiors are hard to miss. Here’s all that you can see inside this marvel.

The sculptural surreal roof terrace is one of the main highlights of Casa Mila, decorated with Gaudi style structures wherever the eye falls. The rooftop not only provides a glimpse into moderniste artwork, with beauty comes functionality as well in the components of construction, like the staircase that leads to the attic, the chimneys and the ventilation towers. Some elements stand unfinished owing to the family’s financial issues but every element on the rooftop adds up to more than artistic expression and functionality which kickstarts the onlookers imagination.

Back in the days of inhabiting, the Espai Gaudí, the attic, was a multifunctional space as a communal laundry area and it functioned as a vast insulating air chamber. This space has now been transformed into a unique display dedicated to Gaudi’s work and his life, the Gaudi Exhibition. Here you can take a look at his life’s work through the mediums of models, plans, designs, photographs, objects and videos. 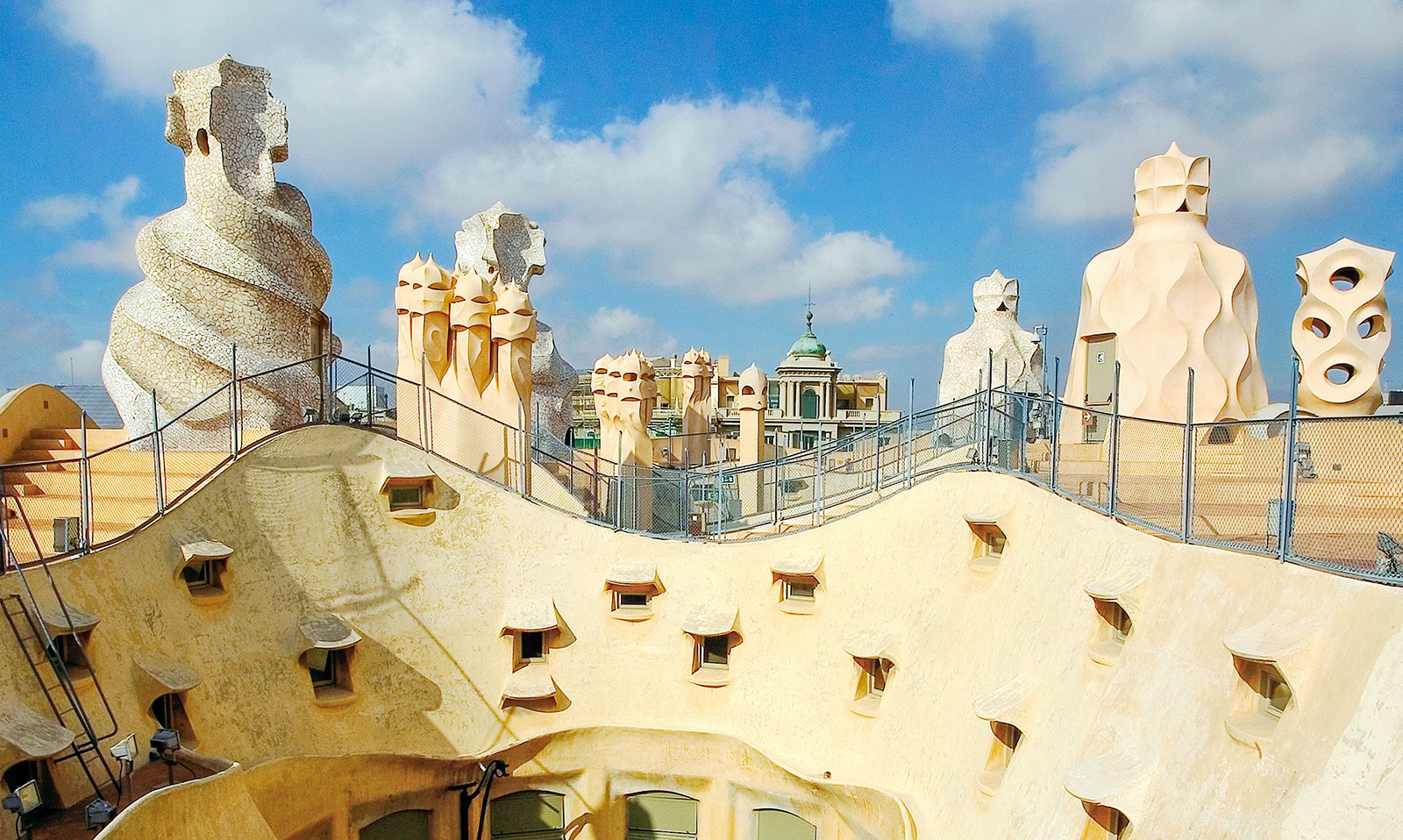 It’s always riveting to take a glimpse into a time far behind and the Pedrera Apartments fires up that curiosity in you. This space reflects the lifestyle of a bourgeois family in Barcelona from the early 20th century, including details like furnishing, utensils and equipment of an era long gone. This apartment provides a double layered perspective — the architecture and the details of their lifestyle. Upon arriving at this space, it is accompanied by an audio-visual presentation which gives further insight on the modernisation and transformation of the city.

The structure of the building is smartly designed around large courtyards and instead of master walls, the building is supported by pillars leaving two large spaces for patios to fit in. Gaudi’s creativity places two patios in the middle of the building but not without functionality. These patios allow light to seep into rooms and also facilitates ventilation. Looking up from the courtyard or down below at the courtyard gives you an aesthetically pleasing view but not devoid of functionality of the architecture as a whole as well.

The upper floor of the building holds the exhibition hall where music, art and cultural exhibitions take place on occasions. One of the most attractive elements of the Exhibition hall is the iconic staircase which holds a range of murals and the wrought iron work done by Gaudi which is still a fascinating work of art.

Are Casa Mila Tours Really Worth it?

Casa Mila is considered as one of the most revolutionary masterpieces in the history of art of Barcelona and had fired up quite a controversy upon reveal in the early 20th century. The waves on the exterior wing of the building, the asymmetrical design and the unconventional wrought iron designs in the building reflect the eccentric take on modernism which is a dreamy and thought-invoking sight to behold. So yes, the guided experience with Casa Mila tours is completely worth it as it enriches the entire experience of artistic discovery and the dive into early 20th century.

Related Read: Skip The Lines Seamlessly at the Casa Milà

Casa Mila is open everyday through the week from Monday to Sunday during two time slots — 9 AM to 6:30 PM and again from 7 PM to 9 PM.

Getting to Casa Mila

What time do the Casa Mila guided tours start?

The Casa Mila guided tours begin at varying times, depending upon the chosen guide. The suggested time is to select a time slot earlier in the day to avoid the hassle of a crowd.

Which is the best Casa Mila guided tour for budget travelers?

For budget travellers, we would suggest making a choice from one of the combo tickets as this would help you explore two top attractions in a much more pocket-friendly manner.

Can I visit Casa Mila at night?

Yes, you can visit Casa Mila at night with the night experience ticket to witness the magical light show on the roof terrace.

Is the entire tour of Casa Mila wheelchair friendly?

Apart from the roof terrace, all locations throughout Casa Mila are structurally wheelchair-friendly.

Can I book a private tour for myself?

Yes, you can book a private tour for yourself or your party for a hassle free experience of the masterpiece.

Ready to head to Casa Mila?

Purchase discounted Casa Mila tickets via Headout today! Explore Casa Mila in a hassle-free fashion with all the need-to-know information in hand.

Fancy heading out to some other stunning Barcelona attractions? Take inspiration from our list of the best things to do in Barcelona here.

In Barcelona for a few days?

In the city for a few days and want some help charting out an itinerary? Check out our 1 day in Barcelona and our 3 days in Barcelona itineraries for inspiration.