The world loves to ring in the New Year with a bash and London is rife with options. From the amazing New Year’s day parades, New Year’s Eve shows, and all-night parties at clubs to the dazzling lights of the fireworks, you’ll find yourself juggling one with the other. One of the best ways to welcome 2022 would be to watch the London New Year’s Eve midnight fireworks’ display in London. It’s a magical sight, bedazzling rather.

Here's all you need to know about the London New Year fireworks, the best restaurants to watch the fireworks from, how to get around during this time of celebration, and other parties and events where you can bid farewell to 2021.

Why Visit London for the Fireworks

The London New Year’s Eve fireworks is an annual affair which is watched by half a million people, some on their TV sets while others watch the display from various places in London, including the Victoria Embankment, the South Bank, Westminster Bridge, and Waterloo Bridge which are the best ones. Over 12,000 fireworks are launched from the foot of the London Eye and from rafts on the Thames at midnight and they light up central London for an hour.

You can catch a bird's eye view of London from the 72nd floor of The Shard, Western Europe's tallest building, standing at 1016 ft. The 360-degree panoramic view stretches over 40 miles of London’s cityscape. The view is breathtaking, and you can’t miss it if you are in London on New Year’s Eve. You can buy your The View from The Shard tickets here. 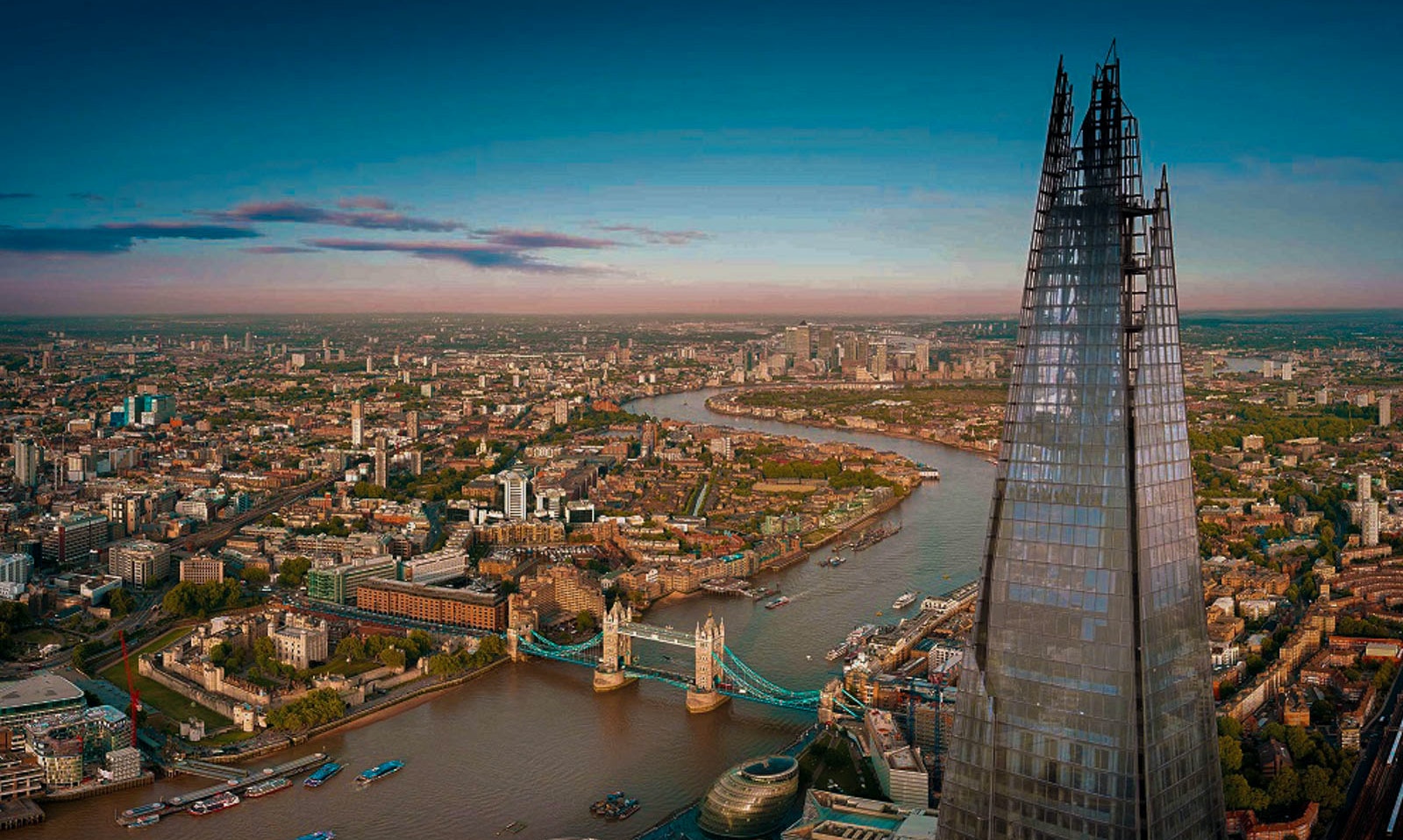 Headout offers another ticket, a hot-selling combo offer of The View From The Shard with 24 hours unlimited Thames Cruise. The cruise is a hop-on-hop-off one that covers the most important and iconic sights in the city. You can collect your tickets from either Westminster Pier (SW1A 2JH), Tower Pier (EC3N 4DT) or Greenwich Pier (SE10 9HT).

You can dive into the festive fervor at Winter Wonderland which has rides, markets, and shows or go pub crawling with Zoo Bar's New Year's Eve Pub Crawl. If you want a divine cultural evening, opt for the Viennese New Year’s Eve Gala at the Barbican or watch Birmingham Royal Ballet perform The Nutcracker at the Royal Albert Hall. 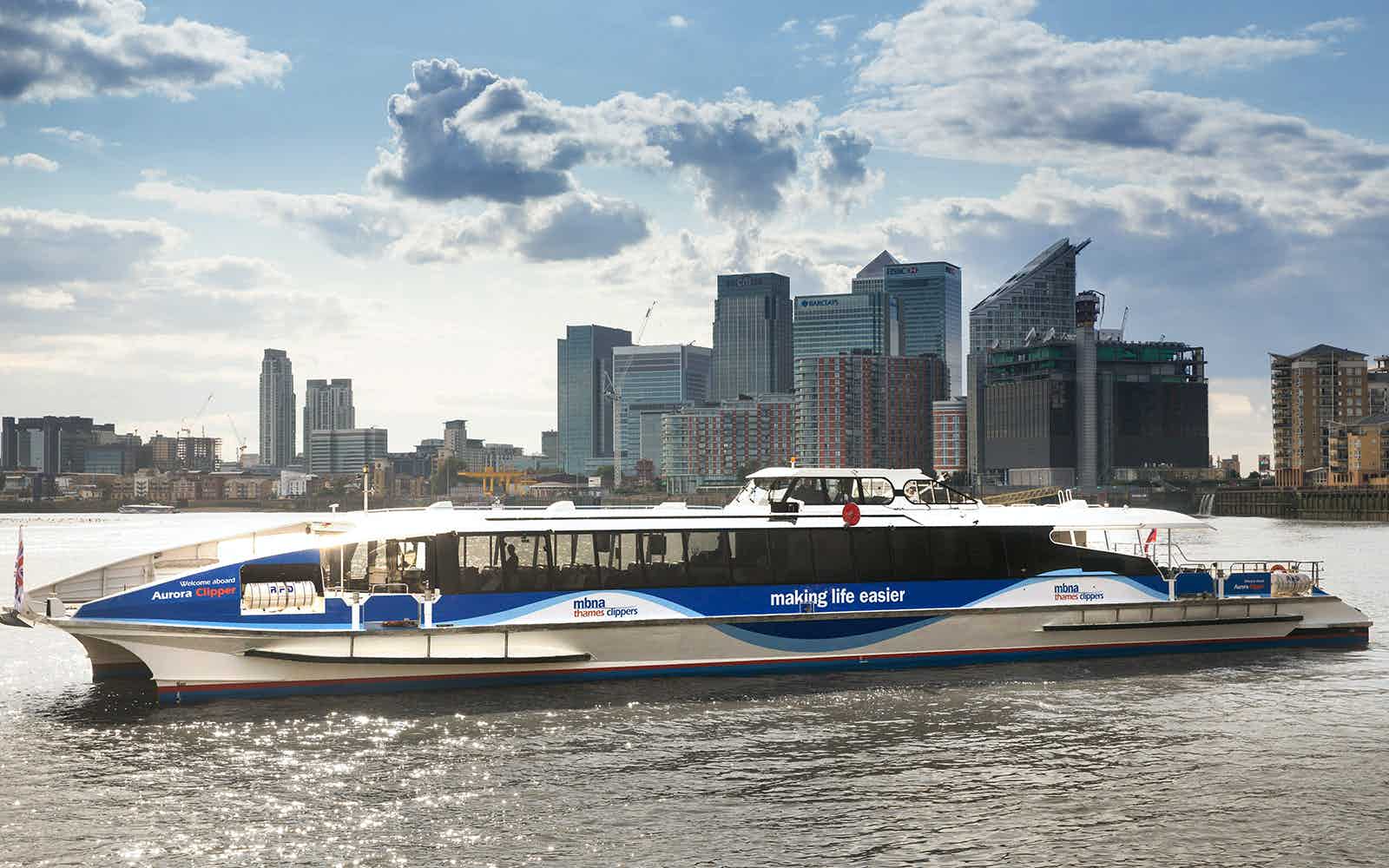 To catch the fireworks in all its glory, you have to make sure the London Eye is clearly visible to you. So hop onto the London Eye River Cruise along the River Thames. This 40-minute circular cruise on a catamaran boat covers top attractions such as the House of Parliament, Big Ben, Tower Bridge, St. Paul’s Cathedral, and many more. You can also select the Unlimited Hop On Hop Off Thames River Sightseeing Cruise. 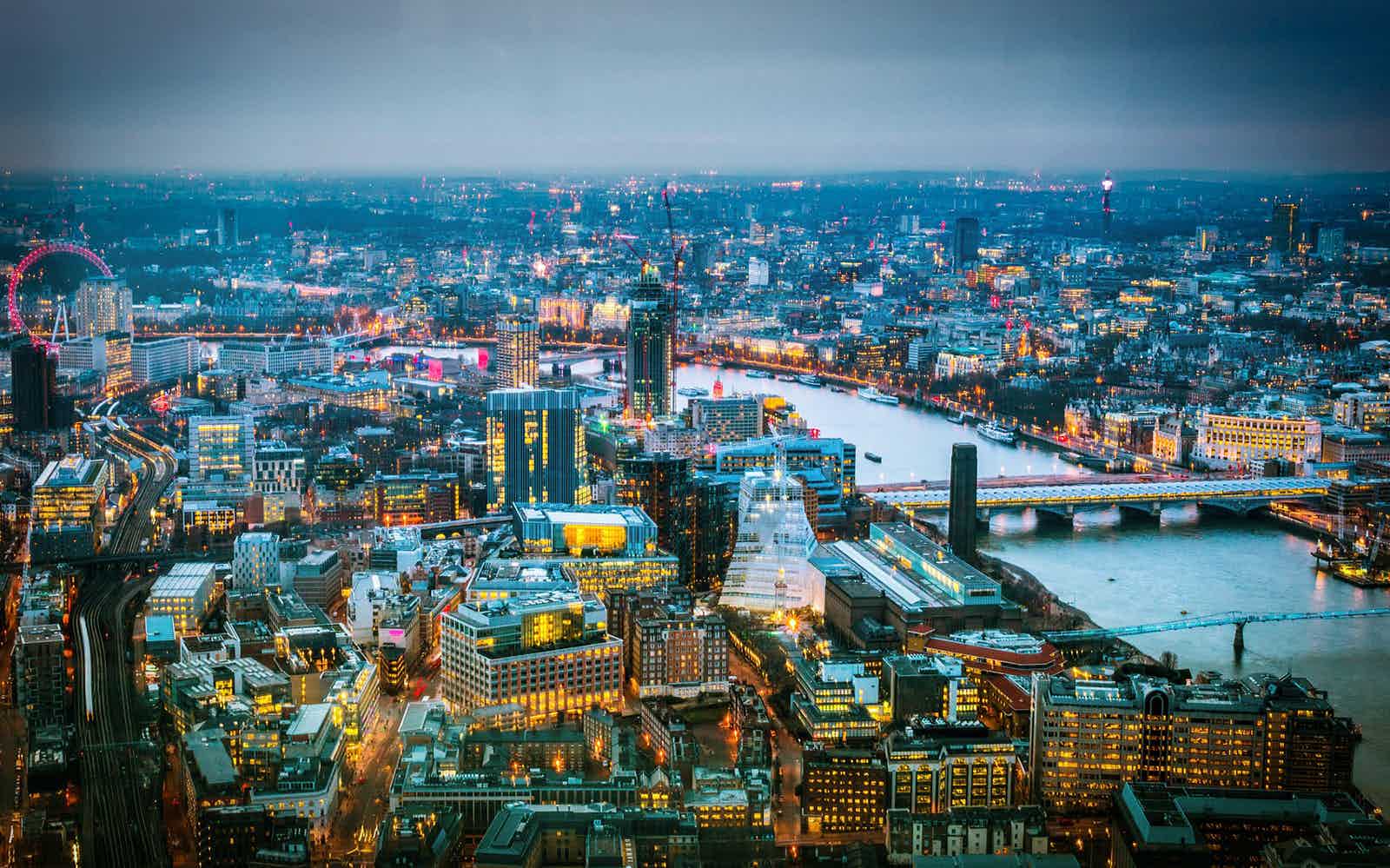 If you want a bird’s eye view of London and its New Year’s Eve fireworks, go up to The Shard, the tallest building in Western Europe and one of the most premier landmarks in London. Located in the center of London, The Shard opened its doors to the public in 2013. The Skydeck on the 72nd floor invites you to enjoy a multi-sensory experience, infusing the sounds of the city below with the one people hear at a height of 1016 ft. 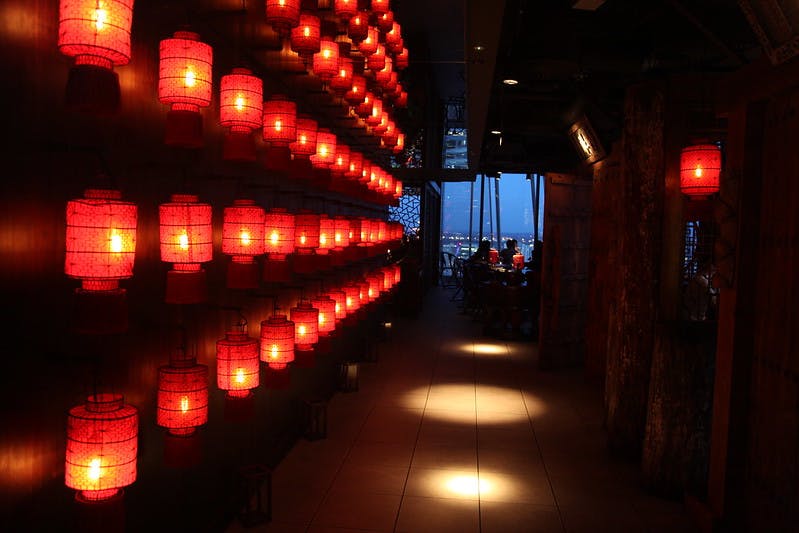 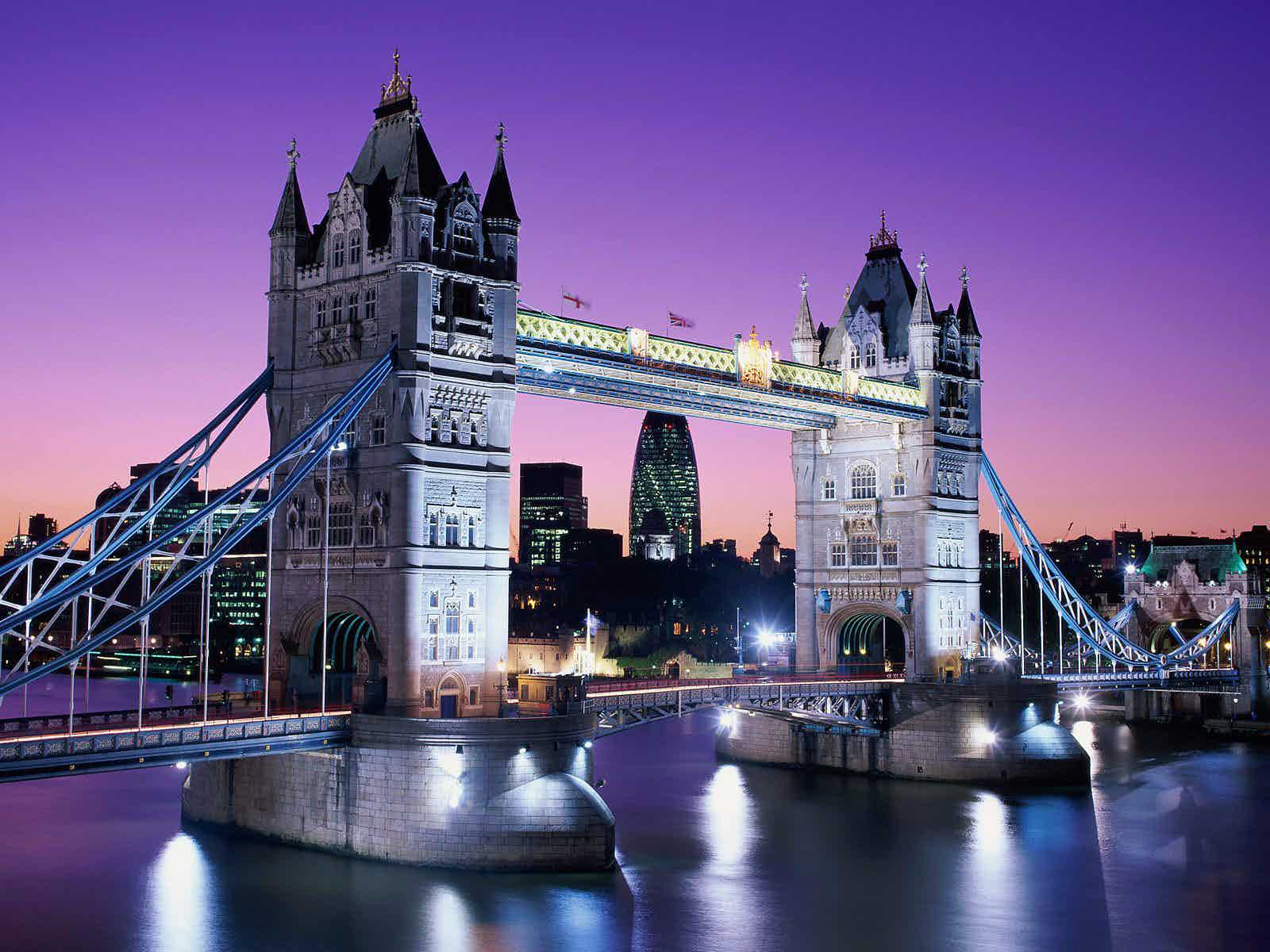 The Tower Bridge is famous for its spectacular glass walkways, elevated 140 ft above the Thames. You will get one of the best vantage points to see the New Year’s Eve fireworks from the West Walkway. The London Eye, City Hall, the Tower of London, St Paul's Cathedral, the City, and Big Ben can be seen from here. The East Walkway offers fantastic views of the Docklands and the elegant Canary Wharf.

Spend an unforgettable night at South Bank Centre with a front-row seat to the New Year’s Eve fireworks. Dance the night away and once the clock strikes twelve, head to the outdoor spaces to witness London’s iconic fireworks’ display. The huge party has the Royal Festival Hall transformed into five floors of set-dressed entertainment, including six pop-up nightclubs and two new themed rooms for 2022. 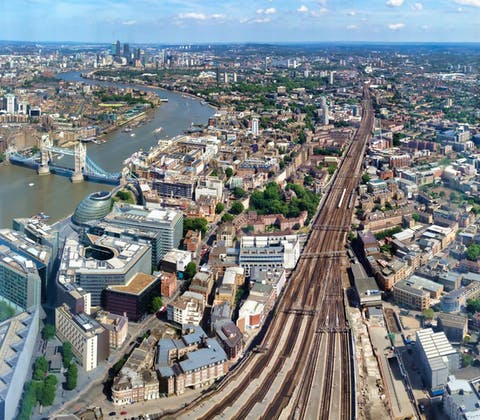 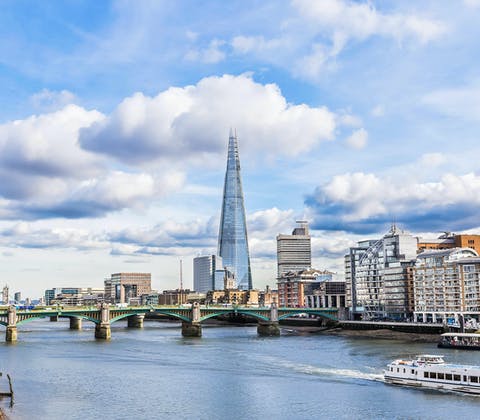 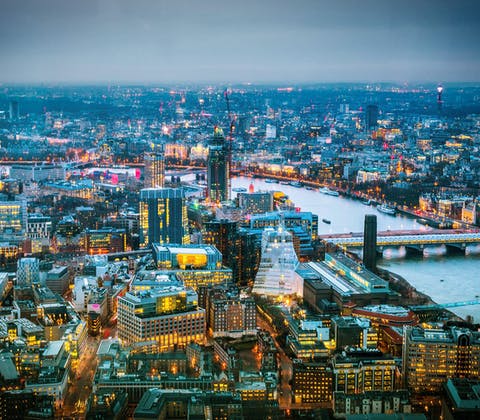 The View from The Shard Tickets
from
£27.2 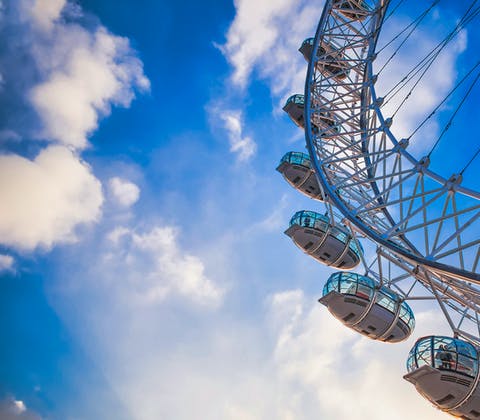 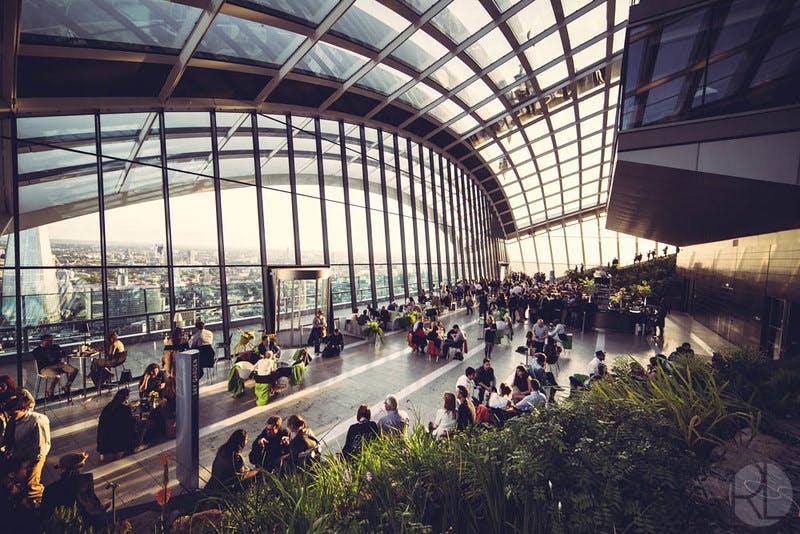 London’s SkyBar stays true to their motto states, ‘Party in the Sky’. Located on the 28th floor of London's Millbank Tower, this rooftop restaurant provides a stunning view of the London skyline and more importantly, a luxurious serving on New Year’s Eve. A top-of-the-world view of the fireworks is accompanied by unlimited live food stations from around the world and nonstop entertainment from 6:00 PM to 6:00 AM.

Join the ultimate New Year’s Eve party at Radio Rooftop in ME Hotel. You can catch one of the best views of London’s fireworks. Enjoy their canapés, drinks at the open bar, and all-night-long entertainment. Doors will open at 7:30 PM and it’s £300 per guest.

The London party boats give people the option to party on the Thames with their friends and family along with watching the extravagant fireworks while onboard. These boats have a fully licensed bar on board and central heating. Some boats, like the Mercia of the Westminster Party Boats, even offer dinner buffets free of charge.

The Ping Pong restaurant in South Bank offers a special viewing area at midnight for the London fireworks, which means you have time till 12 to savor their dimsums. It’s £135 per person and the party starts at 6:00 PM in the evening and continues until 3:00 in the night. They also have a photobooth and serve you a glass of bubbly at midnight.

Bar&Co is known to be London’s best moored bar and is located at Victoria Embankment. On New Year’s Eve, the boat will be a buzzing party hub from where you can see the dazzling fireworks. The party will start at 6pm and continue until 3 in the night.

Getting Around London on NYE

Transport for London (TfL) has announced that people can commute free of charge (public transportation only) from 11:45 PM on New Year’s Eve through to 4:30 AM on New Year’s Day.

London Underground : Trains will run throughout the night with minor exceptions. Some stations may remain closed at night. Trains won’t run between Earl’s Court and Kensington (Olympia). The Waterloo & City line will run every 3-10 minutes until about 2:30 AM.

Trams : There will be a special all-night service every 30 minutes between Wimbledon and Beckenham Junction / New Addington.

Buses : Buses will run a Saturday service and some day routes will continue through the night. Central London routes will be diverted. Most bus services are expected to return to normal by 6:00 AM except those affected by the New Year's Day parade.

Taxis : Taxis and mini-cabs will charge 1.5 times the normal rates but they are your best option to get to central London from Heathrow Airport if you want to avoid the New Year’s Eve crowds in the tubes and buses. 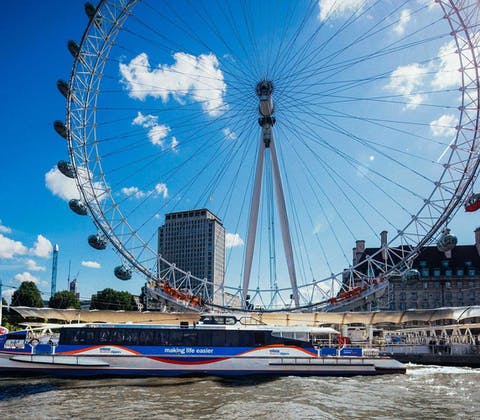 Unlimited Hop On Hop Off Thames River Sightseeing ...
from
£17.5 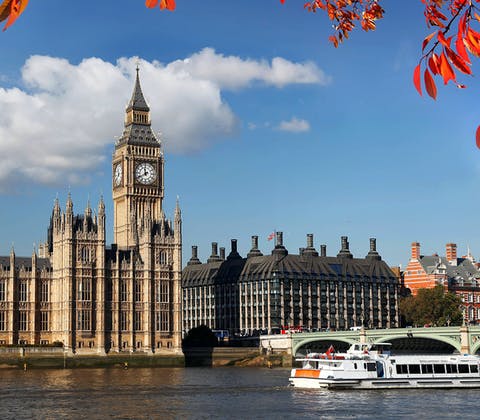 Westminster To Tower of London: Thames River Circu...
from
£10.75

The extravagant display of London’s annual fireworks on New Year’s Eve begins at midnight. It’s an hour-long show which never fails to leave spectators mesmerized. If you are planning to watch from the Victoria Embankment, South Bank, and Waterloo Bridge, make sure you book your tickets (£10) to the venues well in advance. You can also enjoy the fireworks from Cannon Street, Tower Bridge and Parliament Hill, which are the non-ticketed areas. Try to reach these places early to avoid getting squished.

Which is the best spot to view the fireworks?

There are many options for viewing the fireworks: you can go for a Thames River cruise, or go up to the many rooftop restaurants such as the SkyBar or Hutong in The Shard, or head to the Victoria Embankment, South Bank, and Waterloo Bridge.

Where can I watch the fireworks for free?

Cannon Street, Tower Bridge and Parliament Hill are the free-of-charge places from where you can see the fireworks.

When should I reach to get a good view of the fireworks?

How much does it cost to see the fireworks?

If you decide to watch the fireworks from one of the ticketed areas, you’ll have to pay £10.

What is the best way to travel around London on New Year’s Eve?

While trains and buses are free from 11:45 PM on New Year’s Eve through to 4:30 AM on New Year’s Day, they’ll likely be crowded. You can hire a taxi for a more comfortable travel but pay around 1.5 times of the normal rate.

Which is the best place to party on New Year’s Eve in London?

All the restaurants will be hosting a night-ling party including the New Year’s Eve Ball at Battersea Evolution and the NYE Bash at Skylight’s rooftop bar.

Which is the best restaurant to go to on New Year’s Eve in London?

There are ample options ranging from The Savoy, Skylon, Hutong to the Sky Garden and SkyBar.

How do I get to central London from Heathrow Airport on New Year’s Eve?

The best way is to catch a cab although you’ll have to pay 1.5 times of the normal rate.

When do the fireworks start?

The fireworks begin at midnight and go on for an hour.

Are there any restrictions on alcohol consumption in public places?

You can carry and consume alcohol in public places on New Year’s Eve but make sure you are not carrying them in glass bottles.