Disney On Broadway Tour : Behind The Magic Insider Guide

Things to do in New York Disney on Broadway

New York City is much more than The Statue of Liberty, Empire State Building, and Rockefeller Center. Among millions of dreamers who throng the Big Apple, is the childhood you left behind, in the form of Disney on Broadway. Disney on Broadway came to life when Disney Entertainment decided to pair up the charm of Disney’s fantasy and the legacy of Broadway in 1993. Since then, Disney on Broadway has brought to life theatrical versions of classics like The Lion King, and Beauty and the Beast. Today, the Disney on Broadway Tour which takes you through all that happens behind the scenes is a much sought after experience in NYC. Here's all you need to know about Disney on Broadway before going on the tour! Although, wholesome family fun isn't the first thing one expects when visiting New York City, this Disney on Broadway Tour can readily eclipse your last family recess. Behind the Magic with New Amsterdam Theatre tour is the ultimate way to augment your Disney on Broadway experience. Here are the highlights of this tour:

And if that wasn’t enough, the Disney on Broadway package includes headsets for all individuals so that you don’t have to miss any detail as you gape at the spectacles around you

Disney on Broadway Tour Tickets : Behind the Magic with New Amsterdam Theatre 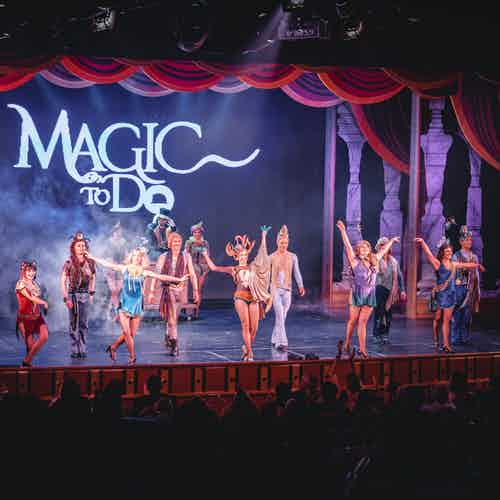 Created in collaboration with Disney Theatrical Group, this tour takes you behind the magic at the New Amsterdam Theatre; entering when the theatre is closed for a special guided tour.

Disney on Broadway’s Hits and Misses Over The Years

From Best to Worst, here's a list of Disney Productions on Broadway over the years. If you're traveling with kids to NYC, make sure to catch a Disney on Broadway show!

The biggest Disney on Broadway success was also the riskiest at its time. An artsy off Broadway director was trusted with bringing this animated classic to stage, and it blew every critic and viewers’ mind. It captivates you right from the beginning with its ‘Circle of Life’ chant and then stays with you forever.

One of the Disney on Broadway shows that is still garnering a lot of attention, Aladdin was noted for its portrayal of Genie, that is very far from what we saw on screen. Aladdin features the classic numbers from the film and adds a few more to bring you every bit of magic you think you can experience.

The megahit remained on the cards for a Broadway adaptation for 4 years. When it finally opened, it featured a much deeper exploration of the princess’s psyches that appealed to adult audiences in particular. It has retained the trademark ‘Let It Go’, ‘Do You Want To Build A Snowman’ numbers.

Beauty and the Beast

The first Disney on Broadway presentation ever was a runaway hit not only because it was the audience’s first chance to see Disney screen to stage adaptation, but also because of its on-point costumes and assonant score. The ‘Be Our Guest’ rendition will keep you humming for weeks.

Although the Disney on Broadway presentation had quite a few departures from the 1964 feature, it’s charming innocence was retained. You will definitely take home the immaculate choreography of this presentation as well as the unreal artistry involved in the presentation. The musical numbers will dwell in your mind as well.

The Disney on Broadway adaptation put the actors on roller skates in order to mime the underwater gliding movement, and was technically quite sophisticated. However, it never created the buzz anywhere close to the original movie. The best part of the show is probably its rendition of ‘Part of Your World’.

If there ever was a Disney on Broadway failure, it is this. Even with a lot of flying about going on, the show was mainly brought down by its arduous music rendered by Phil Collins. The on stage version retains everything that is essentially Tarzan. Its failure to adapt to Broadway is what spelt doom for it.

Ready for a Disney on Broadway Tour?