About the Theatre
Seating Plan
TINA: The Tina Turner Musical

The Aldwych Theatre was constructed in 1905 along together with the Novello Theatre by designer W. G. R. Sprague. Walter Wallis of Balham designed the theatre and added the ornate Georgian-style decorations. The Aldwych quickly built a reputation for the quality of shows it hosted, particularly the series of comedies which played at the theatre beginning in 1925. Later, in the 1960s, the theatre became renowned for another series of plays, this time governed by the Royal Shakespeare Company. Their reign on the theatre lasted for 21 years and saw some of Britain’s best known and respected actors grace the stage in the works of the Bard. Post this remarkable time, the theatre was bought by the Nederlander Organization who currently own it.

Over the years, the Aldwych Theatre has hosted some truly wonderful and remarkable musicals like A Cuckoo in the Nest, A Night Like This, The Balcony, Travesties, Whistle Down The Wind, Fame – The Musical, Dirty Dancing – The Classic Story on Stage, and recently, Beautiful: The Carole King Musical. In 2018, the theatre began hosting the production of Tina - The Tina Turner Musical, based on the life of rock and roll legend Tina Turner. 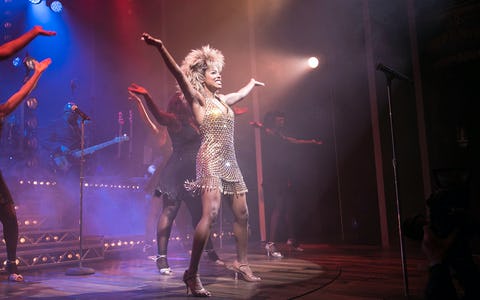 Based on the life of music legend Tina Turner, Tina - The Tina Turner Musical is something truly special. With a book by Katori Hall, Frank Ketelaar, and Kees Prins; and direction by Phyllida Lloyd, the musical has some of the most creative minds in the theatre circuit working behind the scenes. Mark Thompson has designed the sets and costumes, and Anthony van Laast has choreographed the musical. This West End production began preview performances on March 21, 2018, and officially opened on April 17, 2018 to rave reviews. The show's original actors include Adrienne Warren as Tina, who received a Tony Award nomination for Best Performance by a Featured Actress in a Musical in the Broadway production of Shuffle Along.

From uneventful beginnings in Nutbush, Tennessee, to her spectacular transformation into the global Queen of Rock ‘n’ Roll, Tina Turner created a space for herself in a genre flocking with men. Following Turner’s epic life, this musical reveals the untold story of a woman who dared to defy the bounds of her age, gender, and race, and break free from the shackles society is so intent on defining women by. Featuring the classic music of Tina Turner, this jukebox musical depicts all aspects of her life from her youth in Tennessee to her complicated relationship with Ike Turner, and comeback as a rock 'n roll star in her 40s.

Assistive Listening System: The theatre has a Sennheiser Mobile Connect System assistance system, and headsets are available on a first-come first-served basis. It's best to carry your own headphones.

Cloakroom: The Aldwych Theatre has a cloakroom in the foyer with a charge of £1 per item. Please note that oversized items are not allowed in the auditorium.

Guide dogs: Guide dogs are allowed in the theatre. There are specific seats in the auditorium for those wishing to stay with their dogs. Alternatively, staff are happy to dog sit.

Where is Aldwych theatre, London located?

What is the seating capacity of Aldwych theatre?

The Aldwych theatre can accommodate up to 1200 people.

Yes. Since Aldwych theatre, London welcomes disabled guests and strives to make teh show accessible for everyone, accessible sesting is available at the venue.

What are the facilities available at Aldwych Theatre, London?

Assistive Learning System, bars, washrooms and guide dogs are some of the facilities available at the Aldwych Theatre.

Has the Aldwych theatre been granted the See it Safely mark by the Society of London Theatre?

Yes, Aldwych theatre been granted the See it Safely mark by the Society of London Theatre.

How can  I reach Aldwych Theatre, London?

You can access Aldwych theatre via bus, car, and metro.

What are the nearest tube stations to Aldwych Theatre?

Covent Garden and Charing Cross are the nearest tube statons to Aldwych Theatre.