An Immersive Alcazar Seville Tour – All You Must Know

The Moors or the Muslims from North Africa had once occupied Southern Spain including Granada, Cordoba, and Seville. With them, they brought along Islamic architecture and built exotic palaces, mosques, and buildings. When the Christians took over in the 14th century, the Castilian Royals didn’t entirely wipe away Islamic heritage; instead, they adopted the best of it and created a new Mudéjar architecture.

Today, the Alcazar in Seville is the best example of the Mudéjar architecture in Spain and is a UNESCO World Heritage Site. TV enthusiasts will recognize the iconic architecture of Alcazar, distinct with arches, tiles, and lacework, as belonging to the land of Dorne in the epic show ‘Game of Thrones.’ Here is a guide on why the Alcazar of Seville is exceptional and what to see there. History & Architecture Of The Alcazar In Seville

The history of the Alcazar Palace dates back to the early 10th century when the area was used for government buildings by the Umayyad dynasty. Later on, the Abbasid dynasty built an Alcazar or a Royal House and expanded the complex. The Almoravid and Almohad dynasties followed who expanded the complex further, of which only the Palacio del Yeso stands strong today.

The rest of it was demolished and built over after the Christian ‘Reconquista’ or the conquering of the Iberian Peninsula. The Palace was taken over by Castilian Royals, and Peter of Castile, also known as Don Pedro who transformed the palace by employing Mudéjars (unconverted Muslims) from Granada to build in an architectural style that incorporated Islamic architecture with Christian motifs and elements. 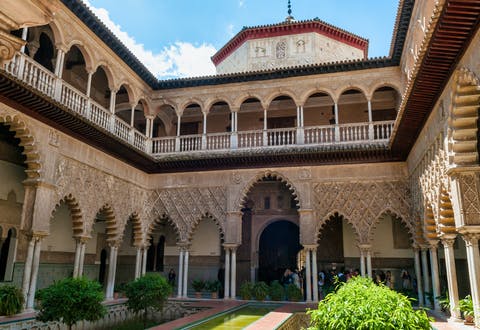 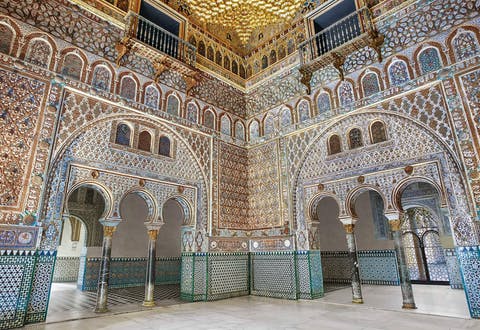 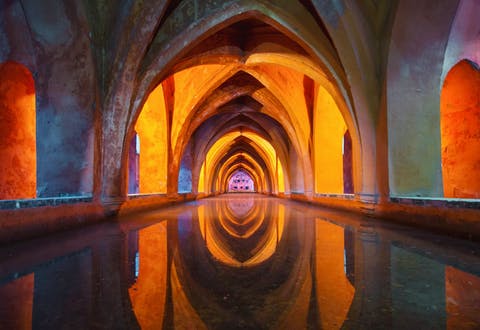 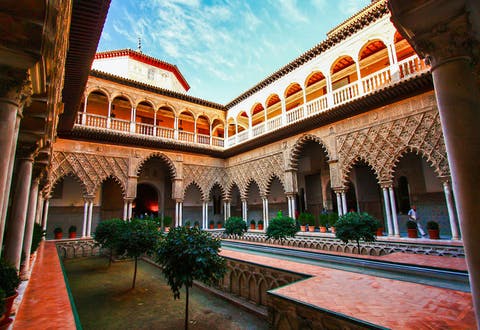 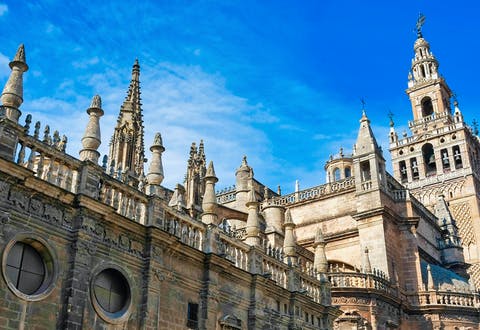 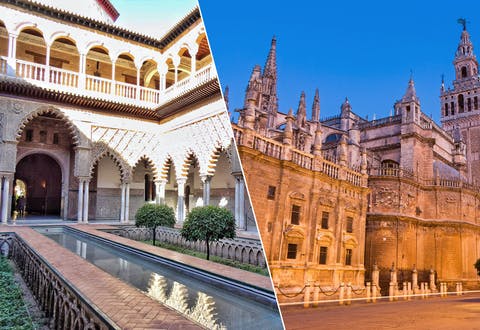 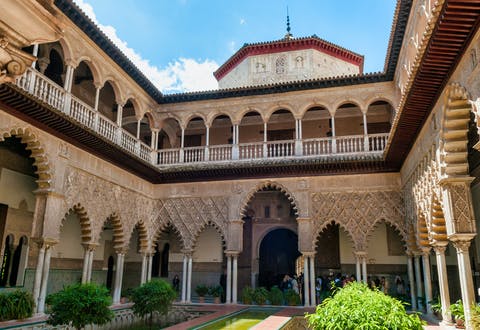 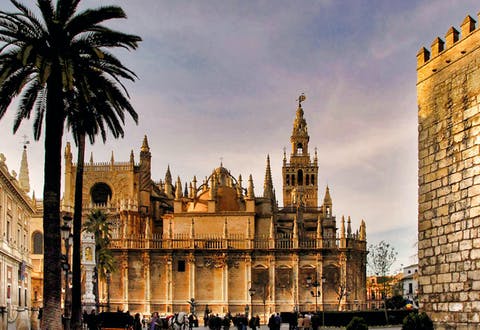 Here are a few must visit rooms you cannot miss out on during your visit. Here's a handy map to help you navigate through the many rooms. Download it and keep it handy on your phone.

A Lion welcomes you to the Alcazar Palace! A white ceramic tile panel with the image of a heraldic lion holding a cross contrasts the red wall of the palace. This gate is known as the Puerta del León and leads you inside the Patio del Léon. Beyond this is the oldest area of the complex known as Palacio del Yeso which includes the gate, the Patio and an arch which leads to the Patio de la Monteria where kings gathered before they left for a hunt.

The contractor’s room is an incredibly important room and influenced the history of Spain. It is the room where navigators, cosmographers and nautical writers worked to plan voyages to the new land of the Americas. It is said that Christopher Columbus was received here after his second voyage to the Americas! The painting of ‘Madonna of the Seafarers’ adorning the room also depicts Native Americans for the first time in any European art.

The Palacio del Rey Don Pedro is the Palace of King Pedro and was built by him in the existing fortress of Alcazar. It is a set of 9 rooms and courtyards that were used for his private use and were styled in beautiful mudéjar architecture with tiles and intricate lacework. It includes some of the most iconic and recognizable rooms of the Alcazar. This section also has a staircase that leads to the Cuarto Real Alto or the Royal Quarters.

Patio de Las Doncellas roughly translates to the ‘Courtyard of Maidens’ and hints to the legend that the Moors demanded 100 virgins every year from the Christians of Iberia. The patio is symmetrical and has a sunken long rectangular pool in the middle surrounded by landscaped gardens. The arches of various sizes lead out to the covered corridor and reception rooms beyond. The upper story borrows from Italian Renaissance style, but the decorative art is essentially mudéjar in style.

The purpose of this room was to leave visitors awe-struck about the greatness of the kingdom, and it did a fantastic job! It was here that King Pedro received royal guests and ambassadors, and was used for administration purposes. The highlight of the room is the gilded ceiling with geometric lacework, it supported by horseshoe arches which have frieze work, and detailed with motifs of castles and lions. This is one of the finest examples of mudéjar art!

The courtyard or the patio of the Dolls is located within the private areas of the Alcazar Palace, a part of the Palacio del Rey Don Pedro. The courtyard gets its name from the four doll faces that adorn the arch that leads to the main entrance of the palace. The patio has been refurbished extensively, and the two top floors were added in the 19th century. The intricate plasterwork with motifs like pineapples reminds visitors of the adjoining gardens.

The cool confines of the Baths of Maria de Padilla in the Palacio Gotico, located right below the Patio del Crucero, are actually a rainwater catchment system. The vaulted ceiling covers a large rectangular pool that is always filled with water and was supposedly used as baths, especially by Maria de Padilla. Maria was the mistress of King Pedro, who didn’t marry her due to political compulsions but she has impacted the course of history more than any women of the era.

The Grotto Gallery is a unique backdrop for the Jardin del Estanque and is a mix of both the mudéjar and Italian styles working together to form something extraordinary. The gallery is essentially a triumphal arch that is made of both real and fake rocks and was designed by Milanese architect Vermondo Resa in the 1620s. The gallery was built into the ancient Almohad wall but included grottos with Italian artwork that has since been repainted and conserved. The gardens are by far the most beautiful space in Alcazar. There are 14 sections to the gardens, each operating as a mini garden. The gardens of the Alcaazar were not only eye-candy for the visitors and the residents, but also served functional purposes. Water was designed to be omnipresent in forms of irrigation canals, ponds, fountains, and pools.

Looking to have your Alcazar Seville tickets ready before arriving the Alcazar? Here are a few options at the best price on the internet. Grab em' before they sell out!

Is the Alcazar Seville Guided Tour Worth It?

The Alcazar Palace in Seville is spread across almost 50 rooms and halls and an expansive garden area. Each of the rooms has a distinct purpose and specialty, and elaborate decoration and symbolism that might be missed by the untrained eye. A guided tour will ensure that a local professional guide will take you through all the best spots in the Alcazar and help you unravel its stories. Some tours also give access to the exclusive Royal apartments which have limited entry. A guided tour will also combine other attractions in the vicinity like the Seville Cathedral and La Giralda.

Directions To Alcazar Seville & Getting There

The address of the Royal Alcazar is Patio de Banderas, s/n, 41004 Sevilla.

Tips For Visiting The Alcazar In Seville

What do I do if the tickets are sold out?

If the tickets you want are sold out, your best bet is buying a guided tour ticket. They are almost always available, especially last minute. The combo tours with the Alcazar and Cathedral visit are also available last minute.

Definitely! Nothing beats an expert guide taking you through the rooms and passages of Alcazar, narrating the stories and lores that the walls of the palace have sealed for centuries. No audio-guide or book can do justice to this experience, and who would you ask questions if you want to know something more about the Moorish clan? A guided tour is recommended all the way!

Can I visit only the Gardens of Alcazar?

Unfortunately, no. There is no ticket that covers only the gardens. You will have to purchase the General Ticket which includes both, the palaces and the gardens.

Can I visit only the Royal Apartments of Alcazar?

Unfortunately, no. There is no ticket that covers only the Royal apartments. You will have to purchase the General Ticket along with the Royal Apartments to gain entry.

What is the cancellation policy for Alcazar Seville Tickets?

Is there a way to see the Real Alcazar for free?

The Real Alcazar of Seville can be viewed for free on Mondays. Again, it’s best you pre-book your ticket for 1 Euro even for those free days so that you can skip the lines. If you are under 16 years of age, born in Seville or a citizen of Seville you can visit the Alcazar for free every day of the year. Note, only the general admission tickets are free and not guided tours.

What is the best time to visit the Real Alcazar of Seville?

As with most tourist attractions in Europe, it’s best to avoid visiting on weekends, especially during summers and holiday seasons. It's best to make it during a weekday in a shoulder season such as spring or autumn. It also helps if you pick a time slot which is very early in the morning or later in the afternoon.

Is there a baggage check at the entrance?

Yes. There are baggage checks, but they are not airport style. If you have a big backpack, you'll have to lock it away in a locker for EUR 1.

Are there any limitations on Photography?

Photography is not an issue unless you want to take commercial pictures or use a tripod, which is not allowed inside. Drones are prohibited as well.

How much time should I keep aside for a sedate visit?

I'd recommend keeping aside 3 hours for a leisure visit of Alcazar.

Is the Alcazar Seville a child-friendly attraction? Are there reduced prices?

Yes, of course. Kids will definitely enjoy the gardens of Generalife and though they may not appreciate the architecture, they will have a good time. That said, you can’t bring a stroller/buggy into the Nasrid Palace or Generalife.You can deposit the strollers while you’re visiting this part of the complex and take it back from the rest. However, baby carriers are allowed in all parts of the complex.

Children from 3 to 11 years have reduced ticket prices and kids below the age of 3 have free entry.

Check out the top things to do in Seville and plan your vacation like a pro!