Get Discounts On The Office A Musical Parody Off-Broadway Tickets!

Things to do in New York Broadway Broadway Show Tickets Get Discounts On The Office A Musical Parody Off-Broadway Tickets!

‘Out of paper, out of stock, there's friendly faces around the block, break loose from the chains that are causing your pain. Call Michael or Stanley, Jim, Dwight or Creed. Call Andy and Kelly for your business paper needs. Dunder Mifflin’

The Office! A Musical Parody takes you to Scranton to the offices of Dunder Mifflin, and laughs at the old jokes and makes some new ones which will have you rolling in your seats. The parody takes a dig at the favorite cast members and their epic moments in the TV series. Watch The Office! A Musical Parody for a trip down the memory lane and a great time with your friends or date!

The Office! A Musical Parody: About The Show

The Office! A Musical Parody is a show you didn’t know you wanted, but one that would do you a whole lot of good. But be warned, this musical is an ode to the fans of The Office and it has done a fantastic job of it! The musical is created by Bob and Toby McSmith who have also parodied other shows successfully including FRIENDS! The Parody, Full House! The Parody!, Katdashians The Musical! And ShowGirl! The Musical.

The musical not only efficiently captures the essence of the show and all its highs, but also makes caustic observations on the context and relevancy of the show today. The American political and social climate has changed over the past decade and some of the racist, sexist, and homophobic content of the show has been called out properly. The musical also breaks the fourth wall and involves the current roles of the cast, like introducing Jim as Jack Ryan (John Krasinski).

The Office! A Musical Parody feels like a comfort blanket, bringing your favorite characters and moments live on stage. It is funny, nostalgic, and sarcastic in equal parts and will leave you with a smile and an urge to watch more re-runs of The Office!

The Office TV series was a labour of love and stretched over 201 episodes across nine seasons and over eight years. Try squeezing all that great material in a two hour show and The Office! A Musical Parody is what you get out of it! The hilarious show follows the lives of characters in the Scranton Branch of the paper company, Dunder Mifflin.

All the favorite characters are present taking you through their quirks and shenanigans. Michael Scott, the manager, is audacious as ever and best described as the class clown. Dwight, the assistant to the manager, is a stickler for rules and loves farming as much as he loves selling paper. Jim, the top salesman, is a floppy-haired lovestruck man who has his heart set on the receptionist Pam.

The rest of the group Angela, Andy, Meredith, Kevin, Phyllis, Ryan, Kelly, and Oscar take their turns in directing you down the nostalgia road. The musical covers all the highlights of the show, although one might beg to differ that there’s a lot more left to cover. The exciting Dundie awards, the deliberations of the party-planning committee, takeover of new managements and marriage proposals, this show tries to get it all in. Watch The Office! A Musical Parody for an evening of nostalgic musings and laughter. 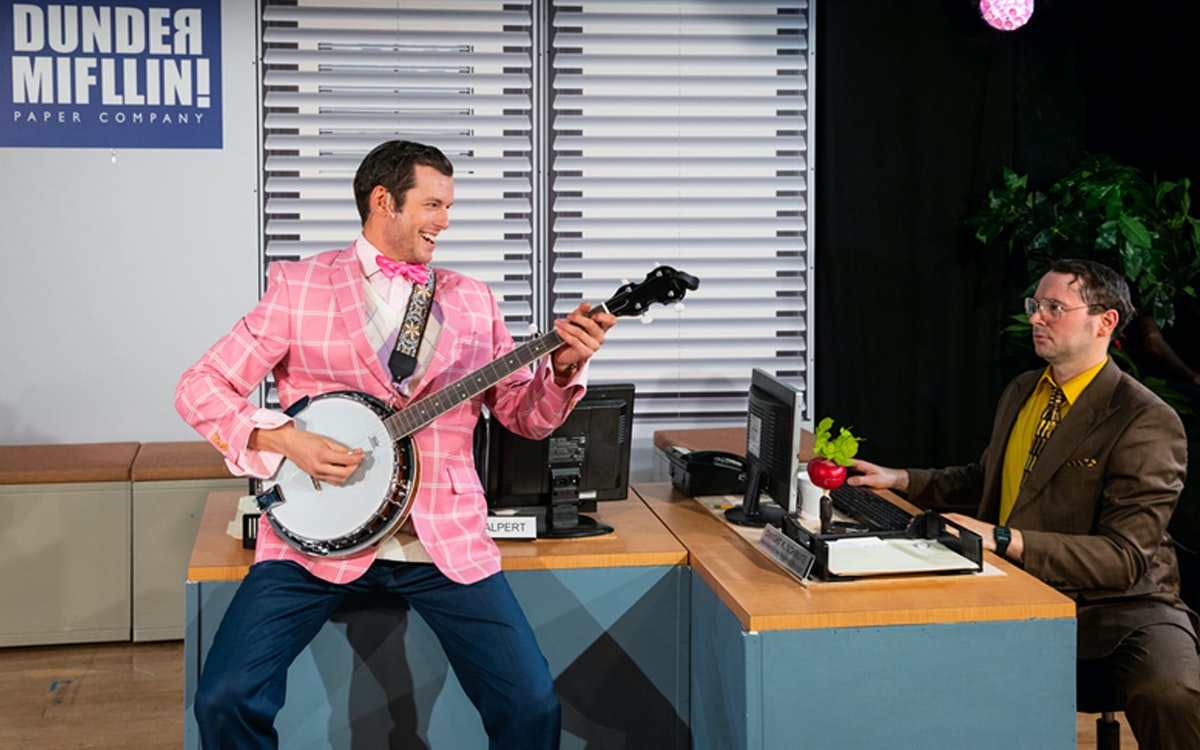 Duration
1 hour 45 minutes, including one intermission

Audience
Suitable for children ages 13 and above

Seating
The Jerry Orbach Theatre has a seating capacity of 199.

Looking for discounts on The Office A Musical Parody Off-Broadway tickets?

Have a look at the real-time seat availability and prices of different sections for The Office A Musical Parody. In the interactive seat-map, select the date that you would like to watch the show and check out the seats available for that day. You can filter the seats as per your desired price range and purchase tickets directly.

The Office! A Musical Parody - The Jerry Orbach Theatre

Use promo code and enjoy The Office! A Musical Parody Broadway tickets

This production of ‘The Office! A Musical Parody’ has been running since September 2018.

“Overall, the performance was a boisterous, rejuvenating escape from reality that'll replenish The Office void in your heart you've been trying to fill with re-runs since 2013.”
- Mashable

“Tackling an Office musical with unfamiliar faces is no easy task, but the gang at The Theater Center, NYC pulled it off flawlessly in this love letter to the show”
- Popbreak

About The Jerry Orbach Theatre

The Jerry Orbach theatre is located within The Theatre Centre on 1627 Broadway, which also is home to the Anne L. Bernstein Theatre. The theatre is on the third floor and is an intimate venue with a capacity of 199 seats. It has been named after Jerry Orbach, who is known for his work in the TV series ‘Law and Order’, and also performed in The Fantasticks which played at the theatre and is touted as the world’s longest running musical.

For those looking to book discounted The Office! A Musical Parody Off-Broadway tickets online, platforms like TodayTix and Headout are your best bet, as they source tickets directly from the box office and scour the internet for any discount codes available for these shows. Any price advantages are then passed on ensuring that you are paying the lowest prices.

The Headout advantage for booking The Office! A Musical Parody Off-Broadway tickets: