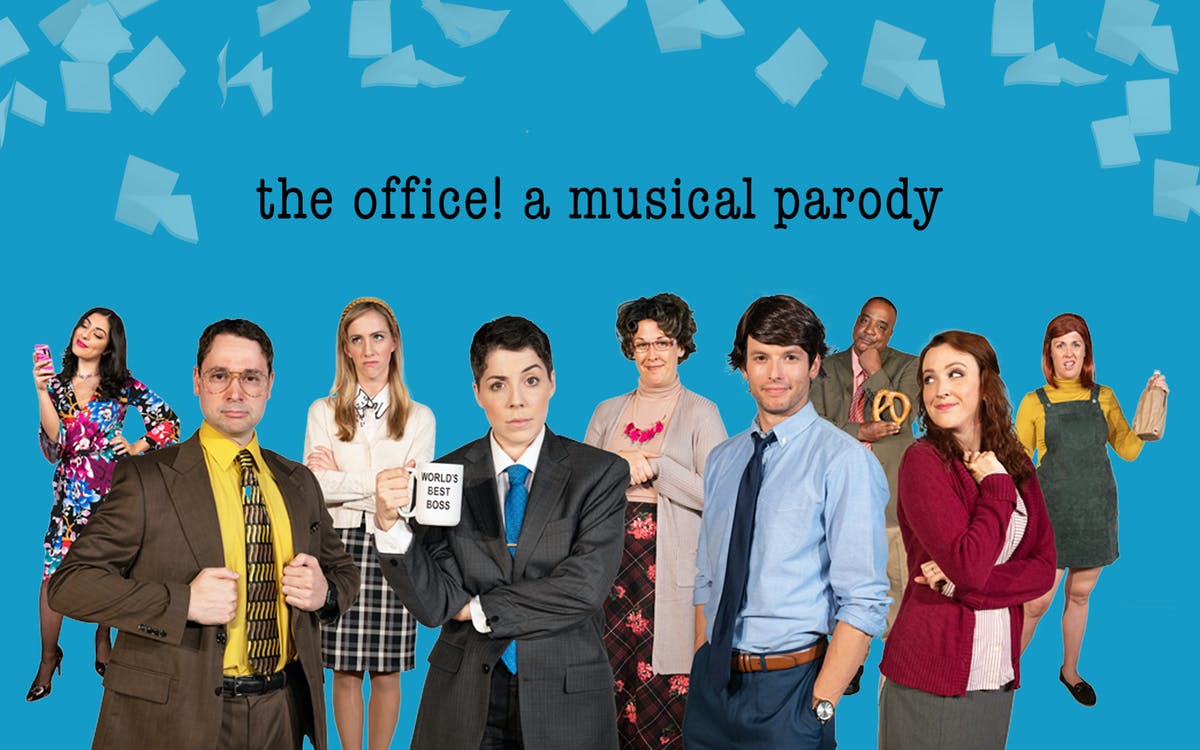 The Office! A Musical Parody

Watch your favorite The Office! characters revive once again, this time not on TV but on stage! Enjoy an evening of nostalgia as you crack up with jokes old and new in this hilarious parody of the hit US and UK TV show.

why watch the office!

If you have been watching re-runs of The Office! since 2013, when the last episode of the US show aired, then The Office! A Musical Parody is for you. It gives you a sense of familiarity as you meet the characters that you love once again, but somehow, they are even funnier! The show is written by Bob and Toby McSmith who have successfully parodied other epic TV Shows. Their previous shows have been FRIENDS! The Parody, Full House! The Parody!, Katdashians The Musical! And ShowGirl! The Musical.

The musical has a brilliant mixed-gender cast that does a great job of emulating the unique quirks of the characters. The cast includes Sarah Mackenzie Baron, Michael Santora, Andrew Wade and Taylor Coriell in leading roles. The parody takes a caustic look at the things each character has said and how quite a bit of it has not aged well, thanks to the evolving culture that decries sexist, racist, and homophobic content.

The Office! A musical parody stays true to its course of parodying the show but also does not make it unpalatable to the fans. As Mashable puts it, it's the 'The world's most elaborate inside joke, created with a whole lot of love, just for fans.'

The Office! A Musical Parody offers a comical and scathing view of the hit TV series The Office. The musical follows the lives of the employees of the Scranton branch of the Dunder Mifflin Company, just like the show did. It offers a condensed storyline of the 201 episodes with a peek into the show's most hilarious and memorable moments.

Michael Scott is the eccentric and irreverent branch manager who doesn't have a mind-filter but manages to do an excellent job of keeping the band together. His assistant manager Dwight Schrute loves rules and has a rivalry with fellow salesperson Jim Halpert. Jim is in love with the docile receptionist Pam Beesly, and a motley group of co-workers supports them.

The musical covers each of the defining moments of their story like Jim and Pam's love story, the Dundies, the shenanigans of the party planning committee, closing of a branch and the slew of new management and of course a lot of coupling! The musical also brings in nuggets of new information like the latest works of each of the characters and a showcase of how the current political and social context makes the same jokes not-so-funny!

Fans of The Office| Parody lovers | Fans of comedy

Duration
The play runs for 1 Hour 45 minutes with one interval.

Written by
Tobly and Bob McSmith

Audience
Suitable for children ages 13 and above.

Dress Code
Smart and casual wear are recommended. Keep in mind, the theatre is air-conditioned throughout the year and can get a bit chilly.

Missing any information?
Yes
No
This experience is unavailable
You'll be the first to know when these tickets are back online.
notify me
Awesome!We will notify you.
Why Headout?
Trusted platform used by 100K+ people, each month
Get the lowest prices and last minute availability
Discover and connect with 10,000+ experiences
Browse verified reviews and professional photographs
Have a question? Live chat with our experts 24/7
Other experiences similar to The Office! A Musical Parody
Free Cancellation
Museums
Museum of Modern Art (MOMA) Tickets
Instant Confirmation
4.3
(2.1K)
$25
Free Cancellation
Museums
Direct Entry 9/11 Memorial Tickets
Instant Confirmation
4.6
(1.8K)
$30
Musicals
The Lion King
4.5
(1.1K)
from $86.50
Musicals
Company
4.5
(1.8K)
from $66.50
Musicals
Aladdin
4.5
(2.3K)
from $69
The world on your tap!Get the Headout app to get tickets on your phone and access app-only deals. Talk about win-win.
We've served 10 million+ guests and we are here for you
10 million +Happy customers across 10,000+ experiences
4.4/55,000+ verified reviews with 90% excellent score
In the MediaFeatured and recommended by the best brands
24 x 7 Help CenterHave a question? Live chat with local experts anywhere, anytime
Headout is building the future of how we experience our cities.
Made with ❤️ all over the 🌎
Headout Inc.
82 Nassau St #60351 New York, NY 10038
Cities
New YorkLas VegasRomeParisLondonDubaiBarcelona+63 more
Headout
About UsHelpCareersTravel BlogCompany BlogCreator Partnerships
Partners
Join HeadoutSupply Partner HubAffiliates
© Headout Inc
Privacy PolicyTerms of Usage