All About the Prague Astronomical Clock – First Timer’s Guide

Prague, the capital city of Czech Republic, is swathed with art and history that has been in the making for a millennium. The origin of this ancient city dates to the Romanesque period and it progressed through the Gothic, Renaissance, and Baroque eras. Prague was an indispensable part of the Habsburg Monarchy and the Astro-Hungarian Empire, and it also played an important role in Bohemian and Protestant Reformation.

The culmination of the historic events through the many ages gave this city magnificent structures and art collections that form the enigma that is Prague. Located on the banks of River Vltava, the city is loved by tourists from all parts of the world. The many museums, art galleries, and historic structures, like the Prague Castle and St. Vitus Cathedral, are among the most visited sites in the city. But the one thing that is unique to the city is the 650-year old Prague Astronomical Clock (AKA Pražský orloj), that dominates the Old Town Square.

Prague Astronomical Clock - In a Nutshell

Best time to visit: March to May/ September to October
Starting Prices for Prague Astronomical Clock at €17
Suggested duration: Less than an hour
Location: Prague

What is the Prague Astronomical Clock?

Pražský orloj is a complex feat of craftsmanship with the mechanical clock and astronomical dial being its oldest components, followed by the calendar dial. The mechanical astrolabe that is the astronomical dial, has the stationery earth and sky as the background and the four moving components that surround them are icons representing the sun and the moon, zodiacal ring, and the outer rotating ring. It also has representations of the 12 apostles.

Which Prague Astronomical Clock tickets should you buy?

When planning a trip to a place like Prague Astronomical Clock where visitors flock in every year, it is important to plan ahead, skip the lines and book the best experience.


History of the Prague Astronomical Clock

It was thought that Prague’s famous astronomical clock was created by the veteran clock master, hanuš, at the behest of the city councillors. It was also believed that upon the creation of the clock, Hanuš’s eyes were injured with a piece of iron to prevent him from making a copy of the clock. This commonly believed legend was busted in 1961, when a paper was discovered that detailed the clock’s functioning, and attributed its creation to the Imperial clock-producer Mikuláš of Kadaň and astronomer Sindel in the year 1410. The Prague Astronomical Clock is the world’s oldest functional clock.

The statues of the Catholic Saints that flank the clock on either side represent vanity, greed, death, and lust. The clock chimes in every hour and the statues are set in motion in a 45-second show. The outer edge of the clock has inscriptions of golden Schwabacher numerals that are set in a black background and represent the Old Czech time (Italian time). The ring moves back and forth throughout the year to indicate the varying time of sunset. The clock also displays time in the 24-hour format that we are used to. But the most striking of all is the clock’s function of showing Babylonian Time through the sun hand.

The Calendar dial has medallions with zodiac signs representing months and at its centre is a depiction of the old town of Prague. The outer dial of this component shows the current day on top and reads each day’s description around the year. The four statues at the bottom represent the things seen positive during 1600s- a philosopher with a scroll, an astronomer with a telescope, a historian with a book, and archangel Michael with a sword. 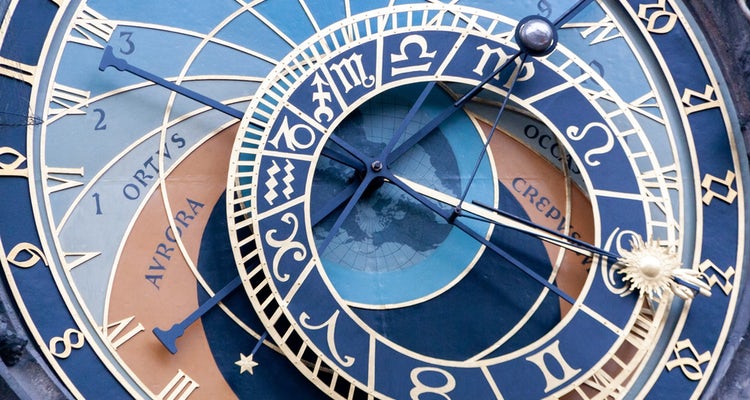 What to See Inside Prague Astronomical Clock

The astronomical dial is a 24-hour analog dial with a double-sided sundial. It shows the local sidereal time, as well as the time in Prague mean time. The calendar dial is a 12-hour clock that shows the positions of the Sun and Moon in the zodiac, as well as other astronomical phenomena such as eclipses. Lastly, the hourly clock face is a traditional clock face with Roman numerals and two hands, one for the hours and one for the minutes.

The Prague Astronomical Clock is notable for its mechanical animations, which are displayed on the clock face every hour. The most popular of these is the “Walk of the Apostles”, in which 12 figures representing the apostles emerge from doors around the edge of the clock face and circle the astrolabe.

The left and right windows above the astronomical clock slide aside to reveal the Apostle's (figures) as viewed from the square. This occurs in the following order: James the Less and Peter, Andrew and Matthias, Thaddeus and Philip, Thomas and Paul, John and Simon, Barnabas and Bartholomew.

The four figures on the sides of the clock represent things that were despised at the time of the clock's making. From left to right, they are Vanity, Greed, Death, and Lust. Each figure is set in motion on the hour, shaking their heads side to side to signify their unreadiness to let go.

The original calender disk was made by Josef Mánes, was replaced by a copy in 1880 and is now stored in the Prague City Museum. The edge of the circle features a church calendar with the names of 365 saints and fixed holidays. The board displays allegories of the months and zodiacal signs. Archangel Michael stands there and points to the top of the dial with a philosopher, astronomer and chronicler.

Witnessing the chime of the Pražský orloj would be at the top of your things to do list, and the best way to catch it in time from the perfect location would be to go as part of the guided city tour. This way, you can be rest assured that your guide will take you to the Old Town Square at just the right time and tell you all about Prague, the clock’s historic significance, and the legends that surround the astronomical clock. What’s more is that you won’t need to hold in your questions because your guide will be more than happy to answer them!


Opening hours of the Historical halls, chapel and Romanesque-Gothic basement

Getting to the Prague Astronomical Clock

By Tram By Car

There is no definitive answer to this question as everyone's preferences are different. However, many people believe that the best time to visit Prague is during the spring (March to May) or fall (September to October) when the weather is milder and the crowds are smaller. If you're looking for a more budget-friendly option, visiting Prague during the winter may be a good choice as hotel prices tend to be lower during this time.

Keep in mind that no matter when you visit Prague, there will always be something to see or do. This city is full of history and culture, and there is always something new to discover.

The Curse on Prague Astronomical Clock

There are many theories about the Prague astronomical clock, and one of them is that it is cursed. The clock was first built in 1410, and has undergone several repairs and modifications over the years. One theory is that the original builder, Hanuš, put a curse on the clock so that anyone who tried to repair or modify it would fail. Another theory is that the curse was placed on the clock by the Devil, in order to prevent people from learning about the movements of the stars and planets. Whatever the case may be, there are many stories about the clock malfunctioning or behaving oddly, and some people believe that this is due to a curse.

Want to know more about the best tips and hacks to make the best out of your Prague trip?
Here's our guide curated from seasoned travel bugs!

What does the astronomical clock in Prague do?

The astronomical clock in Prague, otherwise known as The Orloj, shows the relative positions of the Sun, Moon, Earth, and Zodiac constellations. It also tells the time, provides the date, and, best of all, provides some theater for its viewers on the hour, every hour.

What time does the Prague Astronomical Clock open?

The timings defer according to the seasons, generally it is open from 9 AM -9 PM.

How accurate is the Prague astronomical clock?

The clock is generally accurate to within one minute per day. However, it is not perfectly accurate due to the changing length of days and months, as well as the occasional leap year.

Who are the figures on the astronomical clock in Prague?

The four figures surrounding the clock are four allegories representing vanity (a man holding a mirror), greed (a businessman with a bag of money), death (a skeleton with an hourglass) and extravagance (a Turk prince playing the mandolin).

Is the Prague Astronomical Clock the oldest astronomical clock in the world?

Yes, the Prague Astronomical Clock is the world's oldest working one of its kind. Installed in 1410, it is located in the Old Town City Hall in Prague's Old Town Square.

What is the meaning of the numbers on the Prague astronomical clock?

Other top experiences in Prague

Prague has tons of other attractions you can visit after your trip to the Prague Astronomical Clock. Here are some other attractions that are now open to the public that cannot be missed! Check out more things to do in Prague.