Once in a while in our lives, we encounter entities so influential that it moulds an entire generation. It becomes a characteristic feature of its age. Harry Potter’s wizarding world has assumed this role since the magic in its book series was recreated in a sequence of films beginning in 2001, and even after almost two decades, the world population hasn’t seemed to recover from it. And if you want to experience this magical world in person, Making of Harry Potter Warner Bros Studio Tour is the place for you.

The tour transports you to the Harry Potter Universe that has almost everything you have ever seen in the movies. Take a peek into the famous sets like Ollivanders wand shop, the Forbidden Forest, the Great Hall, to name a few. Familiarize yourself with the props like the legendary Nimbus 2000 and the costumes. This tour will let you retrace the steps of the golden trio and friends like never before. 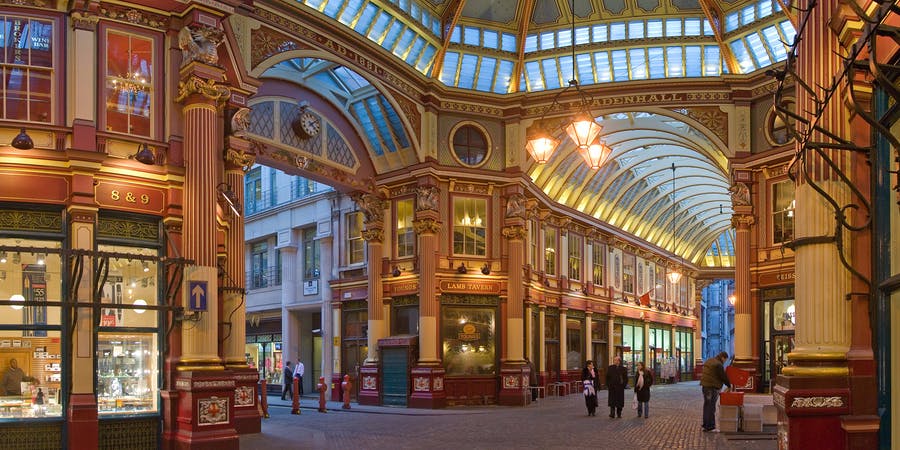 Timings:
9 AM on Mondays, Wednesdays, Thursdays, and Saturdays.

Making of Harry Potter Warner Bros Studio Tour must be in your bucket list if you are a Potterhead or have one at home. The studio tour will add another dimension to the world that has unfolded on the big screen. Beginning from Platform 9¾ to the whomping willow, it’s all there for you to see at the studio tour. One section allows you to see the attire the characters wore during the course of the movies. For a limited period of time, you will experience how the filmmakers brought the different weather conditions to life in the movie sets. And now, for the first time ever, you will be able to witness the effort that went into getting every artistic detail right in the art department of the studio tour. Calling this tour exhilarating will be an understatement. 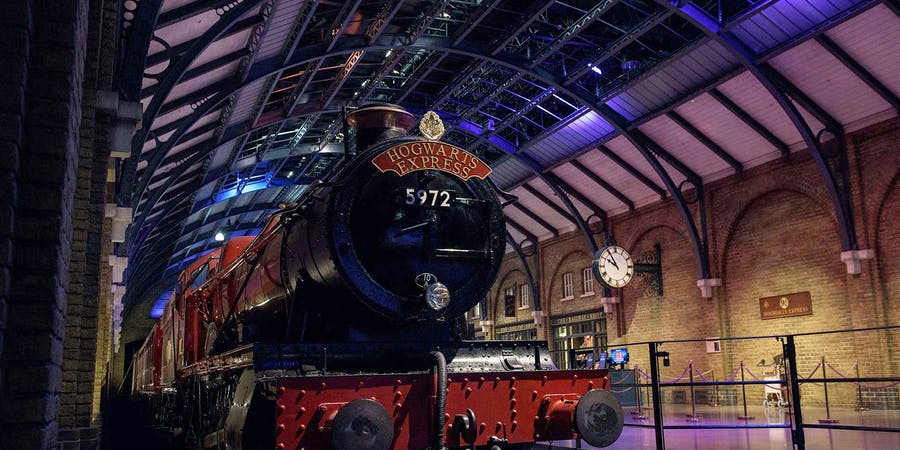 The city of London itself can be a very pleasant place to walk around. Add to that the incentive of visiting the prominent locations where the Harry Potter movies were shot. Spread across the city are numerous spots that have been immortalized by the wizarding world of Harry Potter. This tour begins at the Odeon Leicester Square, that hosted 7 of the World Premieres of Harry Potter movies. Later on, you get to visit the site of the battle of the seven Potters. The bridge featured in Harry Potter and the Half-Blood Prince is also a part of your tour itinerary. Wear your costumes and take your cameras. You’ll never get a better opportunity to take iconic photographs. 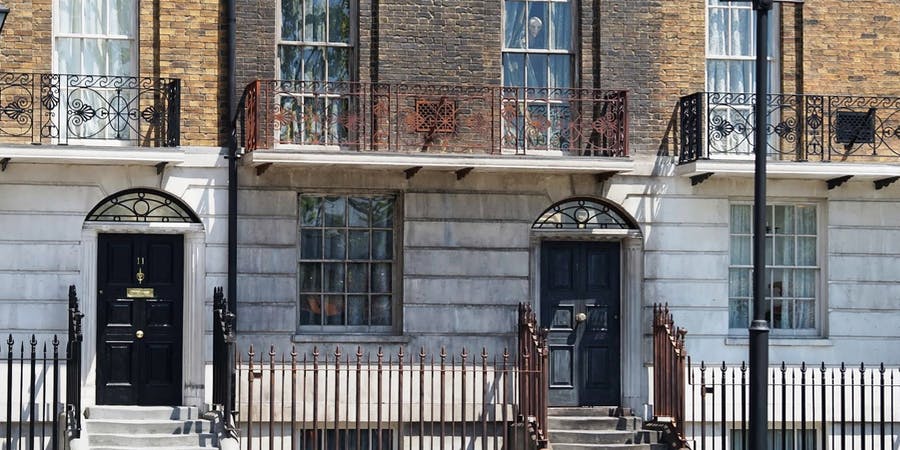 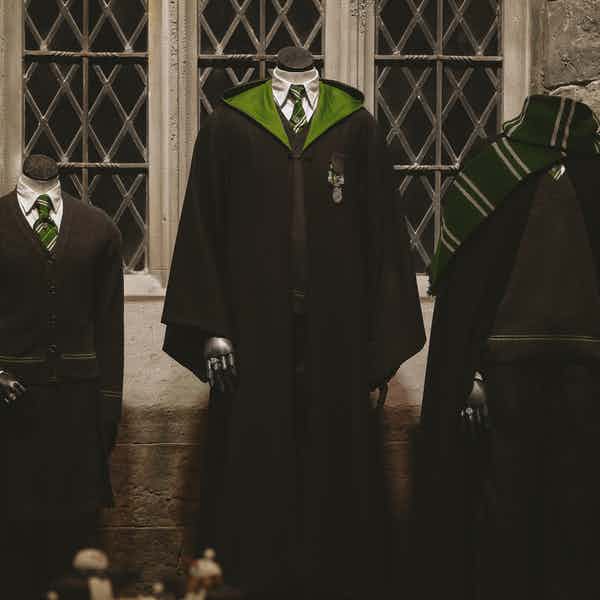 There are a number of prepared sets from the Harry Potter movie series that you can visit. These are based on the original concept art from the movies and will definitely bring you fond memories of your childhood.

• The set of the Great Hall is possibly the most iconic spot in the entire studio. The set is complete with props like the house points counter, house costumes, and other prominent props.
• The Forbidden Forest set has a total of 19 trees and includes dramatic lighting to recreate the ominous aura from the movies.
• Platform 9¾ also garners a lot of attention. A part of the current set was built for actual shooting during Harry Potter and the Deathly Hallows. You can even see the Hogwarts Express waiting at the platform.
• The Diagon Alley served the most essential purpose for all Hogwarts students. The set at the Warner Bros. Studio is complete with Ollivander’s, Flourish and Blotts, Gringotts Bank, Mr Mulpepper’s Apothecary, to name a few. 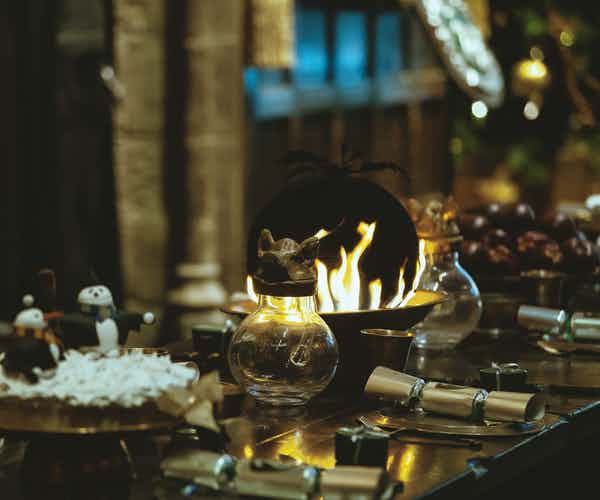 One of the major aspects of creating a fantastical world is attention to detail, barring which the entire illusion falls apart. Props played a significant role in devising the wizarding world of Harry Potter and many of these can now be seen at the Making of Harry Potter Warner Bros Studio Tour.

• Potions Classroom at the studio tour is surprisingly well stocked. Not only will you find labelled jars of various ingredients used in the movie, but you may also bump into a few out of the books.
• Professor Dumbledore’s office has about 900 memory vials that are properly labelled and safely stored for your perusal. You can see Argus Filch and other prominent names featuring on the labels.
• Professor Umbridge’s office is stocked with her prized set of plates featuring kittens. The attention to detail is truly astonishing in this set.
• Fred and George’s mischief mongering was brilliantly captured by the Puking Pastilles mannequin at the entrance of Weasleys’ Wizard Wheezes. The intricate design and execution produce a sublime work of art. 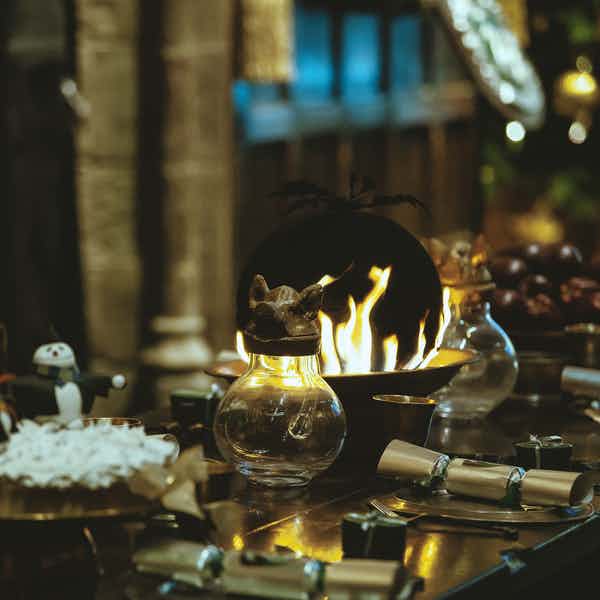 To this day, the wizarding world of Harry Potter features prominently in every cosplay and themed event. This shows how big a responsibility it was to dress the wizards and witches. Some of the famous attires are on display at the Making of Harry Potter Warner Bros Studio Tour.

• Quidditch robes were constantly evolving throughout the film series, much like any other sports of the present day. The entire ensemble along with the protective gear is on display at the studio.
• The spectacular garb on display in the Yule Ball was said to have been a nightmare for the designers. Currently, Hermione’s magnificent gown, Ron’s rather ugly suit and Durmstrang boys’ uniform are all on display at the Warner Bros. Studio Tour.
• The dames of Beauxbatons Academy of Magic stood out with their attire and attitude alike. Originally crafted in France, the ensemble can be seen in its entirety at the studio tour.
• The final shot of the movie series shows us the older versions of the Golden Trio. Their attire, however, still reflected a notable fidelity towards their characters. These are also on display at the Warner Bros. Studio.

Without visual effects, it would have been impossible to achieve the hyper-realism that we now know. Making of Harry Potter Warner Bros Studio Tour lets you experience some of these marvels of science firsthand.

• The Chamber of Secrets door was only partly created using special effects. It is actually a fully operational door with motor powered snakes that you can see that the studio.
• The fabled Invisibility Cloak is also on display the studio. The intricate designs on it were created based on Celtic art and ancient runes.
• The Whomping Willow appeared in the third installation of Harry Potter movies and was a creation of robotics and visual effects. The crude version is on display at the studio.
• Green screens are the backbone of special visual effects. Several scenes from the movies series necessitated the use of green screens. Some of these are open for your supervision at the Warner Bros. Studio.

Harry Potter’s wizarding world features some of the most memorable creatures in the history of cinema. These were brought to life using robotics, prosthetics, and visual effects. You can see some of these creatures at the studio.

• The Basilisk was a wonder of robotics more than that of CGI. The model of the Basilisk created for the final battle scene was 30 feet in size and could even slither on a track. A static version of it is now on display.
• Buckbeak was possibly the most lovable creature in the franchise. As many as three versions of Buckbeak were created for the movie using animatronics. Watch Buckbeak come to life at the Making of Harry Potter Warner Bros Studio Tour.
• Goblins were seen at the Gringotts bank in the movie series. Each goblin was created using prosthetics and makeup. The heads used for shooting the scenes with goblins can be seen at the studio now.
• Aragog scared the skin out of Ron. However, it was equally daunting for the crew to create and operate the talking arachnid. It required about 15 people to operate Aragog. You can see Aragog at the studio tour now.

Another significant element of the Harry Potter movie series was its artistic detailing. From the parchment to the entire castle, everything had to have a unity of aesthetics. The Art Department at the Making of Harry Potter Warner Bros Studio Tour showcases some its brilliant achievements.

• The immense grandeur of the Hogwarts Castle can never be overstated. A miniature model of the entire castle on display will help you grasp the sheer beauty of this creation.
• The signature graphic design used in the film series gained popularity worldwide. It became firmly associated with the franchise. At the Art Department, you will find every piece of document ever created in the film series in its trademark condition.
• White card models were used by the crew of Harry Potter movies in order to find the right camera angles. Prototypes of these models can be found at the studio.
• Drawings were made of almost every other aspect of the movie franchise. From the Hogwarts castle to every little prop had to be conceptualized before they were created. These drawings are also on display at the Warner Bros. Studio.

As soon as the movies shot to fame, the production crew began setting up its headquarters at Leavesden. A stroke of foresight led to the crew saving props and sets for the later movies. As such, the possibility of a studio tour was born. As soon as filming of the final movie was wrapped in 2010, the studio began working towards making the sets and props available to the fans. After 2 years of hard work, Making of Harry Potter Warner Bros Studio Tour was finally inaugurated on March 31, 2012. Since then, the Studio Tour has been consistently secured the top spot among tourist attractions as rated by TripAdvisor users.

By Bus:
Avail Mullany’s Coaches from Watford every 20 minutes or Golden Tours buses from Birmingham or Central London every hour.

By Train:
Get down at Watford Junction from London Euston or Birmingham New Street