Criterion Theatre London: Home of Pride and Prejudice* (*sort of)

About The Theatre
Seating Plan
Pride and Prejudice* (*sort of)

Criterion Theatre, located in proximity to Piccadilly Circus, is a West End theatre that is officially a Grade II Listed building. The theatre is one of the oldest, still functioning theatres in London, having opened on 21st March, 1874. In its 145 years of existence, the theatre has undergone a lot of changes, both structurally and in terms of the genres of theatre it played host to. Initially, the theatre was conceived to function as a concert hall but after a subdued level of success, changed gears and began hosting Edwardian musical comedies. During World War II, the theatre was converted to a safe studio for the BBC.

In 1980, almost a century after the theatre's opening, it was purchased by property tycoon, Robert Bourne. The theatre continues to be owned by Bourne, under a trust he set up with his wife, called the Criterion Theatre Trust. The original design of the theatre was created by architect Thomas Verity and featured a unique underground design, where even the upper circle seats could only be accessed by going down stairs. In 1989, the theatre underwent major renovation on both the front and back of the house.

With a history that dates back almost 145 years, you can bet that the Criterion Theatre has been home of some iconic productions. These include The Great Divorce Case, Haste to the Wedding, Musical Chairs, French Without Tears, Waiting for Godot, Tom Foolery, Run for Your Wife, Fresh Fields, The Complete Works of William Shakespeare, The Waltz of Toreadors, The 39 Steps, Close To You: Bacharach Reimagined, Mr. Popper’s Penguins and many others. The theatre is now all set to play host to Pride and Prejudice* (*sort of). and the show resumes its successful run till date. If you're keen on watching the comedy play Also, here’s a handy link to the seat availability and real time prices for different seats/dates for Pride and Prejudice* (*sort of) on Headout.

Pride and Prejudice* (*sort of) 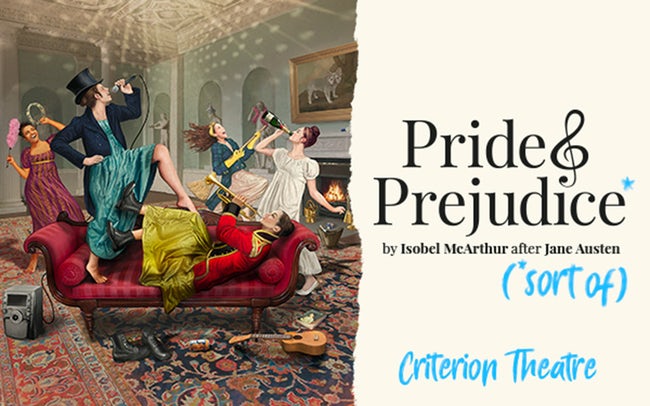 Pride and Prejudice playing at the Criterion Theater is an adaptation unlike any other, which pairs Austen’s witty remarks and some hilarious tunes. The adaptation also features an irresistible soundtrack that includes hits by Candi Staton and Carly Simon.

Mr Bennet has five daughters. He is looking to pass down his estate, but can only do so to a male heir. He plans to marry one of his daughters to a wealthy family, in order to ensure that his other daughters are not destitute upon his death.

Click here to get a discount code for booking Pride and Prejudice* (*sort of) tickets.

Stalls: You can reach the stalls by climbing down 54 steps from the main foyer. There are no lifts in the theatre, so this section should be avoided by patrons with limited mobility.

Dress Circle: The dress circle can be reached by climbing down 32 steps from the main foyer. Again, since there is no lift, this section should be avoided by wheelchair users and others with limited mobility.

Wheelchair Accessible: Wheelchair accessible spaces are available only in the upper circle section. These spaces are located to the left of seat C20 and can be accessed via a negligible slope. There are transfer seats available in each row of this section as well, but there are steps leading to these rows.

Restroom: The theatre is equipped with one access adapted toilet in the upper circle. Regular toilets for males and females are located between the stalls and dress circle section and require steps to be climbed up/down.

Assistive Listening System: The theatre has an induction loop system in the foyer and a infrared hearing system installed in all parts of the theatre. Headsets are also available for guests and can be collected from the cloakroom.

Cloakroom: If you're carrying large bags or pushchairs, the theatre houses a cloakroom where you can deposit your bags. Please reach out to the theatre staff for cloakroom facility.

By Rail : The nearest train station from the Criterion Theatre is the Charing Cross Station, at around a walk of 5 minutes.

Vehicle: If you're bringing your own car, the nearest car parking is the Q-Park in Chinatown.

1. Ikoyi: Experience a modern twist on traditional West African flavours with this chic space with a decor that goes with the cuisine.

2. Cichetti: Sample the seasonal menu of Italian small plates at this modern and sleek dining room with marble tables.

3. Kricket Soho: Try a decadent blend of British ingredients and Mumbai flavours at this funky joint for small plates and cocktails.