About The Theatre
Seating Chart

This guide on the Ambassador Theatre seating chart will help you find the best seats in the house. Get real-time seat availability and pricing, insider tips on the best seats and more.

The Ambassador Theatre opened in 1921, intended to primarily host musical comedies and operettas. The first show that ran on this theater was The Rose Girl, followed by a string of iconic shows like The Diary of Anne Frank, We Bombed In New Haven, Celebration, Godspell, Dreamgirls, and Topdog/Underdog, before becoming home to the Broadway revival of Chicago in 2003.

Herbert Krapp designed the interiors of the Ambassador. The theater walls, ceiling, boxes, doorways and arches utilize more intricate Adam-style decoration, widely known to be Krapp’s favorite design themes. The theatre was built on a lot that was too small, which resulted in the auditorium being built diagonally. This caused the auditorium to be distinctly hexagonal and the stage to be very wide, resulting in a lack of wing space.

The Ambassador Theatre has 1088 seats, spread across three primary sections, orchestra, front mezzanine, and rear mezzanine. There are limited seats available for the pit and some standing row seats too. Each of these seats offer a distinct viewing angle and varied price points, depending on the view offered.

We have looked at each of the primary section in detail and also the price point for each. 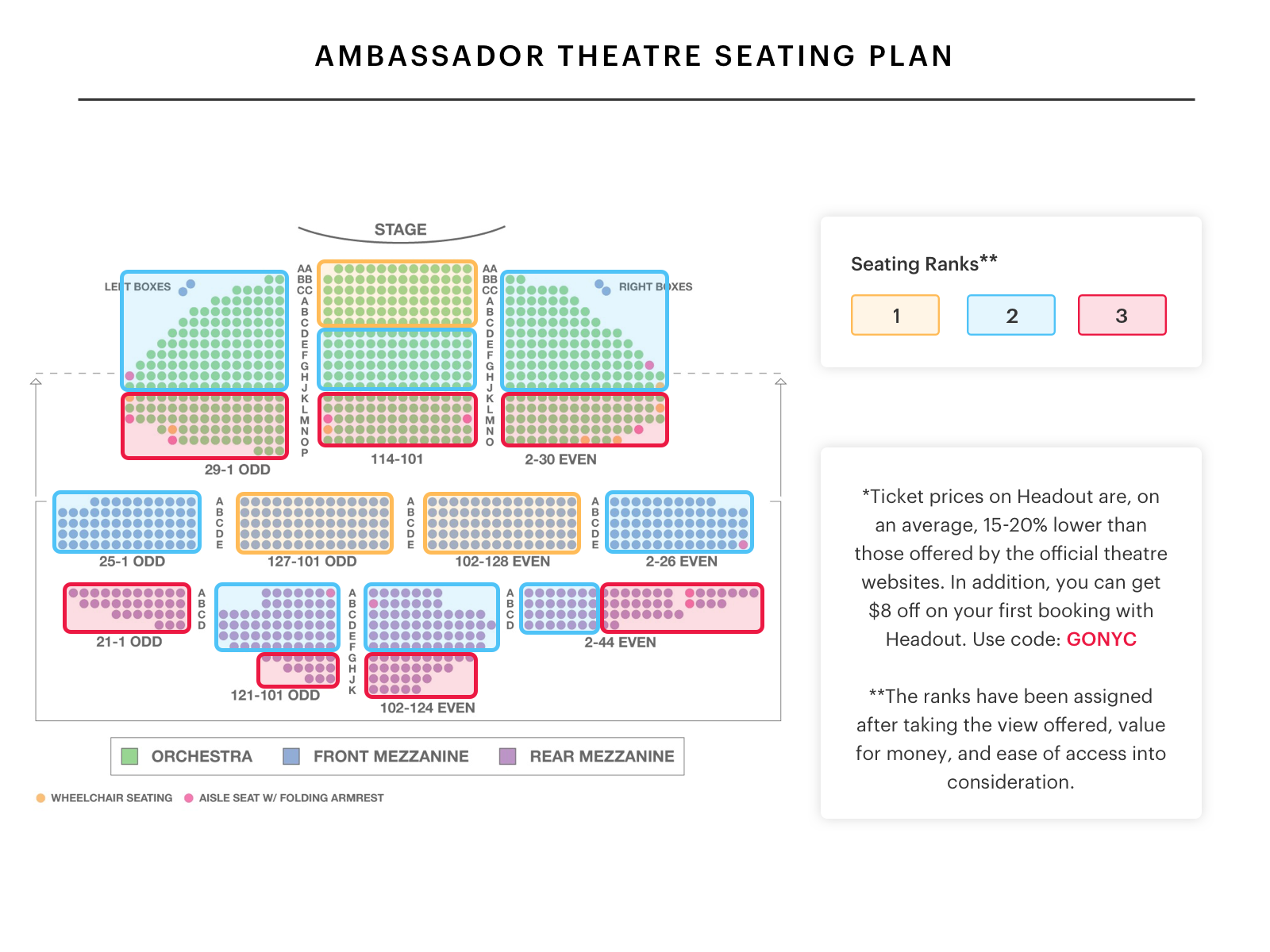 • Value for money seats
Middle Orchestra and front Mezzanine seats.
• If money were no matter
Front Orchestra and Front Mezzanine
• Best views of the stage
Orchestra - the front rows (AA-B), middle seats (105-109). Front Mezzanine - the first few rows are considered amongst the best in the theatre..
• Best Legroom
Row A in Orchestra, row A in front and rear mezzanine and corner seats.

Get $15 off your Broadway tickets on Headout using code: BROADWAY15

In the center orchestra, the front rows (AA-B), middle seats (105-109) are the best in the theatre, offering a clean view of the stage and bringing patrons as close as physically possible to all the action. The middle rows in this section are also good, offering a good look at the stage without any obstructions.

As you move further back, the quality of the view offered understandably dips, with the last few rows offering an average view at best. Center orchestra pricing follows a similar pattern, with the front row seats being the most expensive and the last row, the cheapest.

The left and right orchestra are pretty identical when it comes to viewing angles. Although, the seats closer to center orchestra are quite good while the extreme corner seats can be avoided.

Looking at view on offer, the front mezzanine offers a uniformly good look at the stage, especially the first few rows, which are considered amongst the best in the theatre. The last few rows of this section can be avoided if you don’t have a strict budget to follow. If you’re looking for cheap tickets for Chicago The Musical, go for the corner front mezzanine seats over corner orchestra seats.

The final section of the Ambassador Theatre is the rear mezzanine. Like the front mezzanine, this section is also divided into four subsections with varying number of seats. The view offered by most rear mezzanine seats (except the first few rows) is pretty average, which explains the relatively lower prices.

If you’re on a tight budget and don’t care about the stage view, any seat in the mezzanine would be the best option. The standing row seating section is also a great option for budget conscious people.

Get $15 off your Broadway tickets on Headout using code: BROADWAY15

Have further questions about the Ambassador Theatre seating chart? Need details about specific seats? Just drop your question in the comments below and we’ll get back to you!

How many sections does Ambassador Theatre have?

Where are the best seats in Ambassador theatre?

The best seats in the Ambassador theatre are the first few rows of the Front Mezzanine, the  Orchestra - the front rows (AA-B) and middle seats (105-109).

What is the seating capacity of Ambassador Theatre, New York?

The Ambassador Theatre has 1088 seats

Which section has wheelchair accessibility at Ambassador Theatre?

All wheelchair spaces and companion seats at Ambassador Theatre are across rows J to O in the Orchestra, which is completely step free. There are also 6 transfer seats across this section.

Automated Posters
Claim Your Discount
Get $15 Off your
Broadway Tickets today!
Blog Subscribe