Get Discounts On Fiddler On The Roof Broadway Tickets!

Things to do in New York Broadway Broadway Show Tickets Get Discounts On Fiddler On The Roof Broadway Tickets!

Embark on a visual treat with Tony Award-winning director Bartlett Sher and his team behind South Pacific, The King & I and the Tony Award-winning Best Play Oslo on a journey to a theatrical masterpiece. Featuring a talented cast and crew, Fiddler on the Roof invites you to a wonderful evening of lavish orchestra and vivacious dance. After surpassing 3000 performances since 1964, the musical is all set to stage its revival for the eager crowd. Beautifully arranged and choreographed by acclaimed Israeli choreographer Hofesh Shechter, introduce yourselves to a brand new celebration that raises its cup to joy!

Fiddler On The Roof: Broadway Story

Based on a Yiddish book by Sholom Aleichem, Fiddler on the Roof takes you back to the small, steep town of Anatevka that is bound by traditions. It is this time when Jews and Russians live in delicate harmony. The town goes through a tumultuous change when it is challenged by Tevye and his colorful community. Witness his three daughters — Tzeitel, Hodel and Chava — grow up and fall in love in a time of extraordinary change. A heartfelt story that acquaints you with several emotions — including the essence of human longings for love, community, success, family, and freedom. 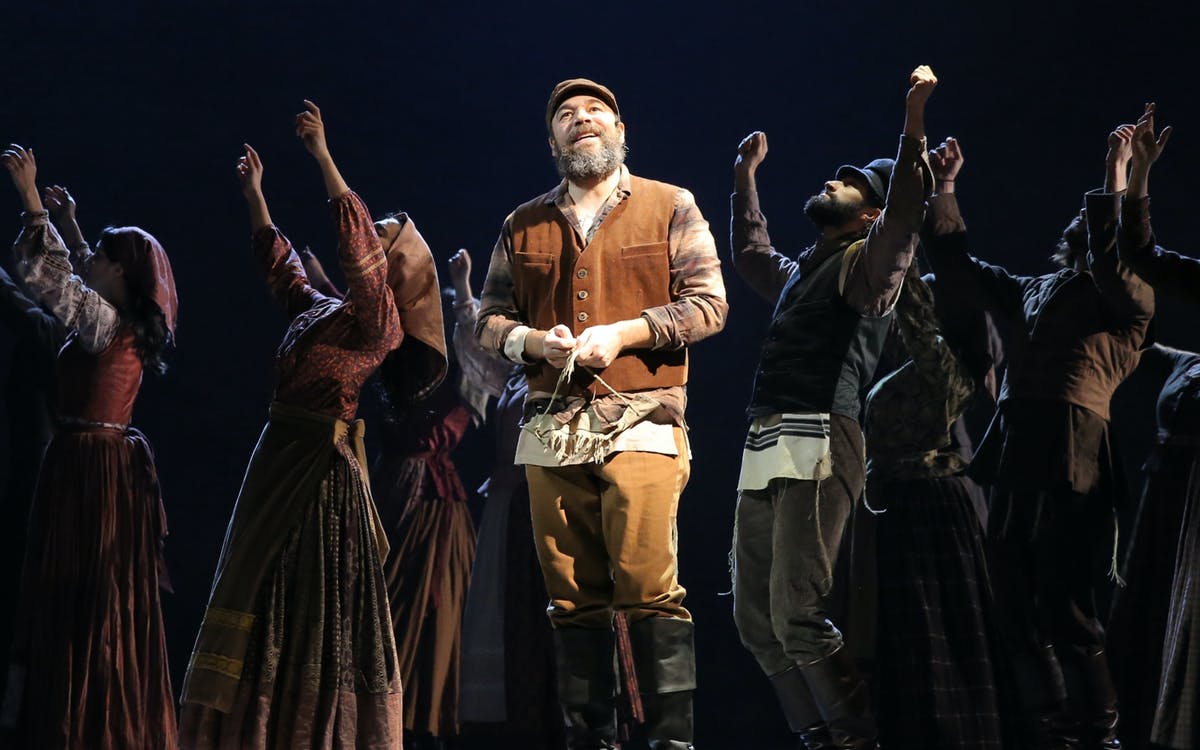 Duration
3 hours, including one intermission

Seating
The Stage 42 Theatre has a seating capacity of 499.

Fiddler On The Roof Broadway Tickets

Looking for discounts on Fiddler on the Roof Broadway tickets?

Have a look at the real-time seat availability and prices of different sections for Fiddler on the Roof. In the interactive seat-map, select the date that you would like to watch the show and check out the seats available for that day. You can filter the seats as per your desired price range and purchase tickets directly.

Fiddler on the Roof - Stage 42 Theatre

Use promo code and enjoy Fiddler on the Roof Broadway tickets

Fiddler on the Roof has been running since 1964 and has surpassed 3000 shows until today. It opened in Broadway at Stage 42 on February 21, 2019 and will continue to be performed till September.

Fiddler on the Roof Reviews

“Musically, geopolitically, emotionally, this Fiddler raises the roof.”
- The Guardian

“Fiddler on the Roof” always makes you cry for that loss — and, more recently, for the losses endured by many other migrants. But by reuniting the Jews of the Pale with their language, 'Fidler afn Dakh' does something more: It brings both alive again, not just in sadness.”
- New York Times

Earlier known as the Little Shubert Theatre, Stage 42 is best known for its Off Broadway performances. Designed by architect Huge Hardy, the theatre was opened in 2002 and was also one of the first Broadway venues to be owned by the Shubert Organization. Apart from this, theatre hosts a seating capacity of 499 seats.

Fiddler On The Roof Broadway Tickets

For those looking to book discounted Fiddler On The Roof Broadway tickets online, platforms like TodayTix and Headout are your best bet, as they source tickets directly from the box office and scour the internet for any discount codes available for these shows. Any price advantages are then passed on ensuring that you are paying the lowest prices.

The Headout advantage for booking Fiddler On The Roof Broadway tickets: