It's time to holiday with Headout
Flat 8% OFF on all Headout experiences this holiday season!
Use Code
*coupon valid for the next 24 hours only.
About The Theatre
Seating Plan
Company

West End’s Gielgud Theatre is currently showcasing a new-look broadway classic ‘Company’. In this gender-bending production (yes, you read that right) by the great Stephen Sondheim and George Furth, the roles are literally reversed as the cast takes an all-female turn. Starring Olivier Award nominee Rosalie Craig and 2-time Grammy & Tony Award winner Patti Lupone, this revival of the comic musical about love, marriage and relationships is definitely one to watch. And if Company Musical London tickets are what you're seeking, you've landed on the right page.

‘Company’ is perhaps Sondheim’s most frequently performed musicals across the world, however, this time there is a slight twist in the tale. Although previous attempts have been made to make a gender-reversed and queer adaptation of this show, this is actually the first, changed production to have been officially licensed by Sondheim himself, making it an absolute must-watch!

The following guide outlines all the important information you need to know about the show. This guide will also help you find tickets at the best price for the West End adaptation of this musical.

Stephen Sondheim’s ‘Company’ made its debut on Broadway in 1970 and the concept musical took the world by storm, racking up a record 14 Tony Award nominations and winning 6. The reason for the show’s success, according to Sondheim, was that it was one of the very first plays to deal with adult themes and relationships, topics that were avoided onstage at the time. Another reason the show did well was that it did not follow the traditional style of a book musical, rather it took a different approach and used short vignettes to get the point/story across.

As mentioned above, this musical has been revived multiple times over the years, but this particular adaptation is a whole lot different. The original story centres around its protagonist, Bobby, a man celebrating his 35th birthday with his friends and girlfriends. In this version by Elliot Harper Productions, the character of Bobby, or should we say ‘Bobbie’, will be a female role and will be played by Rosalie Craig. This major change was approved by Sondheim after much deliberation and a trial run. At this point it is unclear, how much of the script has actually been edited to accommodate this change, however, you can rest assured that it will still be a great, if not better play.

Also, here’s a handy link to the seat availability and real time prices for different seats/dates for Company Musical London on Headout.

‘Company’ is a wild, modern musical that takes a playful and fun look at relationships, love and the idea of marriage. The original production follows the love life of Bobby, a single man who is unable to commit to a long-term relationship, let alone marriage. The show starts off at his 35th birthday, where he is surrounded by his friends, who are happily married and wondering why Bobby doesn’t find a nice woman and settle down himself? These thoughts soon start to pervade Bobby’s mind and he decided to find out for himself, the pros and cons of marriage. Through a series of dates, dinner parties and conversations, Bobby tries to understand the dynamics of this social construct and find out whether it is right for him or not. In this gender-reversed version by Marianne Elliott, Bobbie too finds herself in the same situation, this time surrounded by five couples and her best friends. 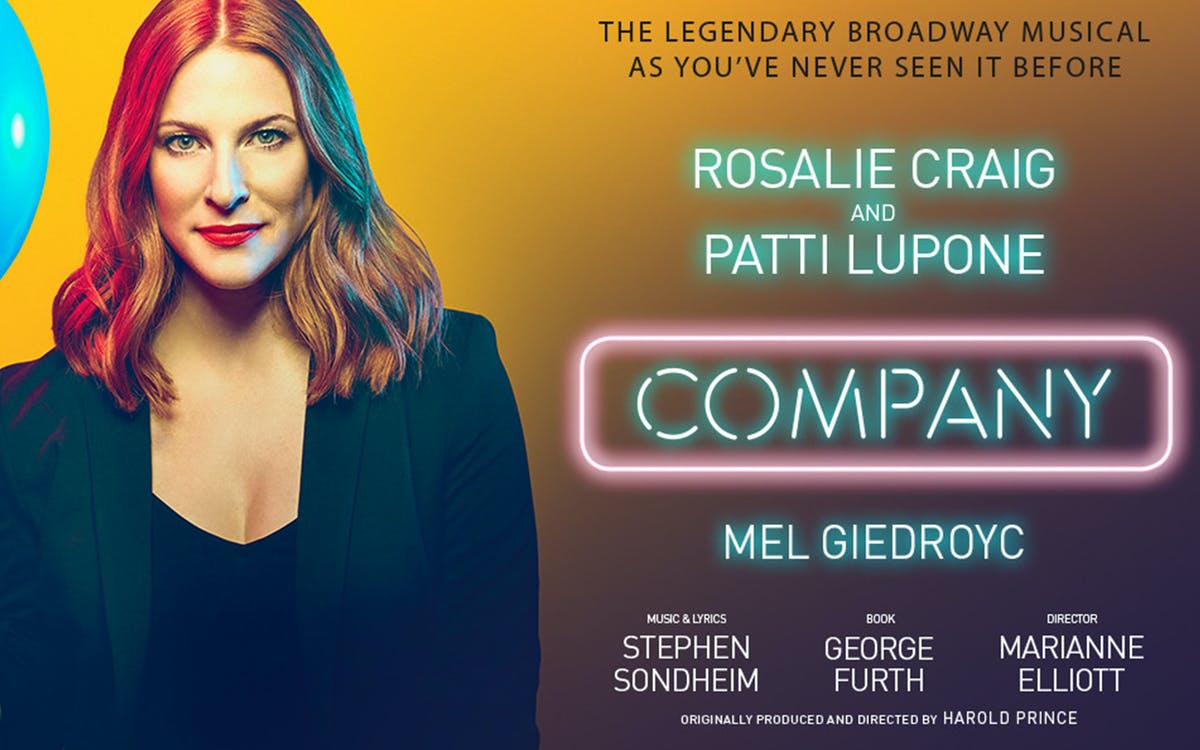 Use promo code WE10 and save £10 on Company Musical London tickets.

Company is the latest musical starring Rosalie Craig and Patti LuPone, currently being hosted at the Gielgud Theatre.

Looking out for discount on Company tickets !

Have a look at the real-time seat availability and prices of different sections for Company Musical London. In the interactive seat-map, select the date that you would like to watch the show and check out the seats available for that day. You can filter the seats as per your desired price range and purchase tickets directly.

Gielgud Theatre Seating Plan will help you find the best seats for Company on West End.

Use promo code WE10 and save £10 on Company Musical London tickets.

Top Songs
'Being Alive', 'Getting Married Today', and 'Sid By Side'

Duration
2 hours and 35 mins, with 1 intermission

Seating
The Gielgud Theatre has a seating capacity of 986.

Apart from getting tickets for Company online, there are other ways to obtain West End tickets for cheap, such as:

Company TKTS tickets are currently unavailable. Keep a tab on this space for further details.

Day Seats are discounted tickets that are available for purchase, and are to be used, on the same day at the theatre. Please note that the availability of tickets is based on the discretion of the Gielgud Theatre Box Office, and may not be available for all shows.

Day Seats at Gielgud Theatre are currently unavailable for purchase.

Q: What time should I arrive at Gielgud Theatre?
A: Doors open 45 minutes before show time. We recommend arriving at least 30 minutes before curtain.

Q: Is there a possibility that I will get partial view seating if I purchase discounted Company Musical London tickets?
A: When booking with Headout, you will get to select your specific seats, thus, ensuring you do not get stuck with partial view. However, if you opt to try and win lottery tickets, or purchase day seats, your seats will be allocated at the discretion of the Box Office, which can potentially mean partial view seating or split seats.