Get Discounts On Six The Musical Broadway Tickets!

Things to do in New York Broadway Broadway Show Tickets Get Discounts On Six The Musical Broadway Tickets!

Men and stories of their exploits have long graced history books and often little is known about the women in their lives. King Henry VIII reigned in one of the most regressive periods of history where his wives had been reduced to a footnote, based on their fates – Divorced and Beheaded. In 2020, Broadway will witness a topsy-turvy punk version of this history when the Queens raise their voice and sing out their stories, unabashed and loud! Watch the Six Queens of King Henry reclaim their power this spring in an outrageously entertaining and fun musical show.

Six The Musical: About The Show

Feminism and British history are rarely on the same page but Six attempts to bring them together in a neon-designed rock-concert on stage. The show written by Toby Marlow and Lucy Moss challenged the story of Henry VIII and his Queens and gave them a voice through this path-breaking show that also contests theatre traditions. The Queens dress up in punk costumes, sing their version of history in pop, rock, and even EDM, and they urge you to film them singing! Don’t miss out on this scintillating show that is an endearing display of sisterhood and all about creating your own identity.

King Henry VIII undoubtedly holds the reputation as one of the worst men in history. So much so that children learning history today need a mnemonic to be reminded about the tragic fates of his wives. Divorced, beheaded, died, divorced, beheaded, survived, that’s how it goes. The rock concert is about the Queens taking power in their own hands and narrating their perspective of history. The show turns the story on its head by featuring the Queens in a modern pop-concert kind of scenario where the one who has the most tragic story gets to lead the band.

Watch Six The Musical to find out which Queen has it the worst and who gets to lead the band! 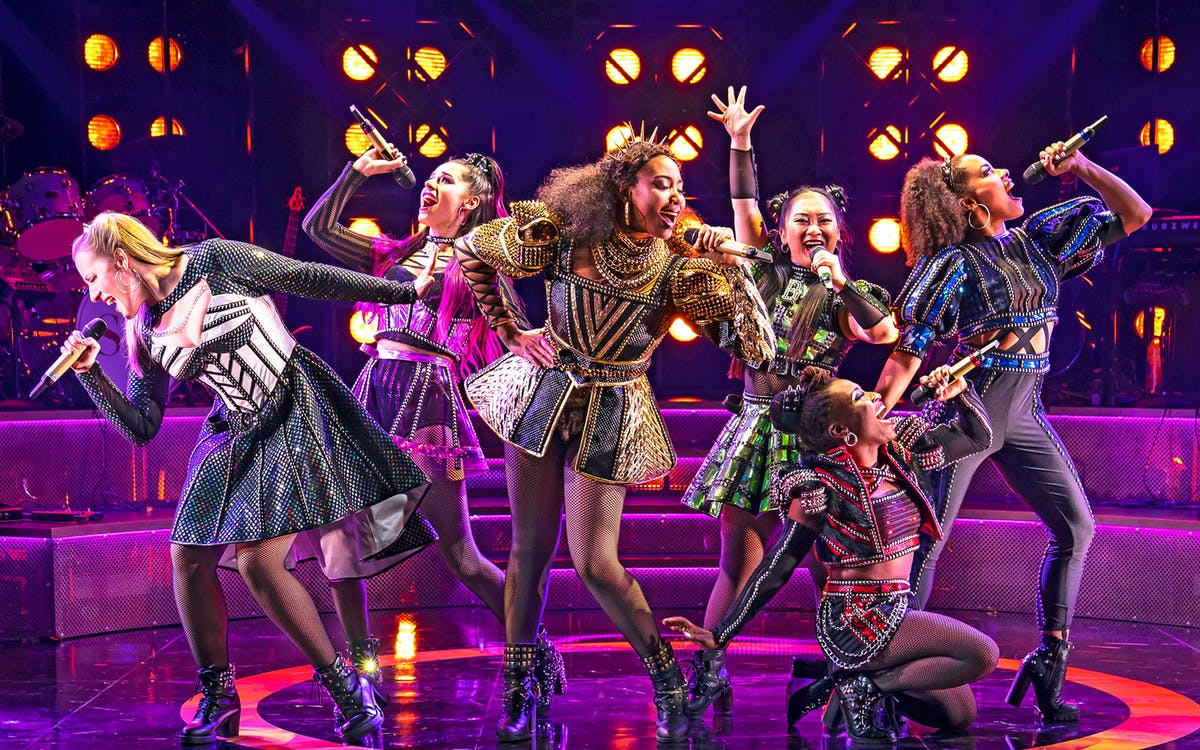 Seating
The Brooks Atkinson Theatre has a seating capacity of 804.

Looking for discounts on Six The Musical Broadway tickets?

Have a look at the real-time seat availability and prices of different sections for Six The Musical. In the interactive seat-map, select the date that you would like to watch the show and check out the seats available for that day. You can filter the seats as per your desired price range and purchase tickets directly.

Use promo code and enjoy discounts on Six The Musical Broadway tickets.

Six The Musical has had a fabulous run across the world. It premiered in Edinburgh Fringe in 2017 and then did a stint Off West-End followed by a UK Tour. It premiered on West End in 2019 at the Arts Theatre and will now premiere on Broadway in 2020. It has shows lined up in Australia (Sydney Opera House in 2020) and Chicago (Broadway Playhouse in 2020) as well.

“Six delivers pure entertainment throughout its headlong 80 minutes. The wickedly smart lyrics are well set on tunes that are both catchy and meaty; the cast of terrific singers sells them unstintingly, straight to the joyful finale.”
- New York Times

“Amid a powerhouse score and exceptional cast, the history of Henry VIII’s wives doesn’t turn away from trauma, brutality and sorrow, but the six women on stage persist in breaking free nevertheless.”
- Chicago Sun Times

Save $8 on your first booking with Headout when you use promo code!.

For those looking to book discounted Six The Musical Broadway tickets online, platforms like TodayTix and Headout are your best bet, as they source tickets directly from the box office and scour the internet for any discount codes available for these shows. Any price advantages are then passed on ensuring that you are paying the lowest prices.

The Headout advantage for booking Six The Musical Broadway tickets: