About The Theatre
Seating Plan
The Lion King

In its early days, the then-unnamed Lyceum Theatre hosted a circus, doubled up as a chapel, and was also home to the first Madame Tussaud’s waxworks exhibition, before becoming a licensed house in 1809. Between 1816-1834, it operated as The English Opera House, before reopening as Theatre Royal Lyceum & English Opera House in July the same year.

The theatre closed in 1986, but reopened its doors in 1996 with Jesus Christ Superstar, followed by Oklahoma! from February 1999 to June 1999. Standing tall in Wellington Street, this iconic 2100-seater theatre has been home to the theatrical adaptation of Disney’s The Lion King since September 1999.

This Lyceum Theatre guide is designed to help you understand the layout the theatre and help you pick the perfect seats.

Coming Up At The Lyceum Theatre

“Ten years after it first came to the stage, The Lion King still feels as fresh and soul-stirring as ever.”
- The Telegraph 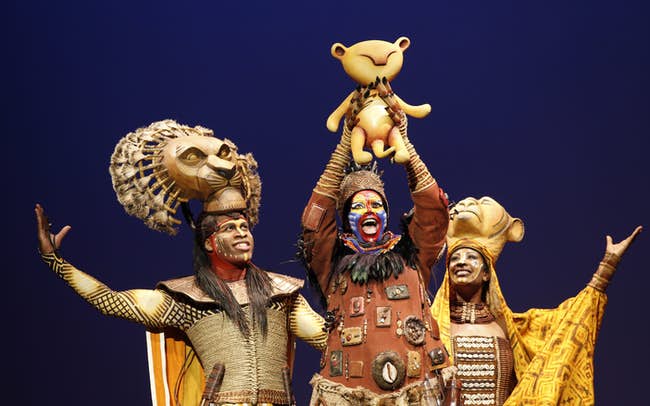 This theatrical adaptation of Disney’s 1992 film, The Lion King, is loved by both children and adults. Upon its debut at West End, it was nominated for 8 Olivier Awards, and won 2 - for Best Theatre Choreographer and Best Costume Design. It is one of the top ten longest-running shows on West End, and one of the best-selling musicals. Since its opening in 1999, The Lion King has been watched by over 12 million people. With its impeccable set, brilliant costumes, and a talented cast, the play transports you to a completely different world in the heart of the African Savannah.

The Lion King is a retelling of Shakespeare's Hamlet. It follows Simba, the young lion prince of Pride Lands. When his Uncle Scar tries to kill Simba and his father by bringing them to a stampede of wildbeests, in order to usurp the throne, Simba somehow manages to escape and survive. After the death of his father, Mufasa, Simba runs away from home, blaming himself. He meets two outcasts, Timon and Pumba, and lives with them, until one day, his childhood friend Nala finds him. How Simba returns to the Pride Lands and fights for his right to the throne and save the jungle from Scar's tyrannical rule forms the main crux of the story.

Book The Lion King tickets and save £7 on your first booking. Use promo code: GOLDN

The Stalls can be accessed through a wheelchair accessible entrance. There are accessible seats in rows P and ZA (Stalls). There is also lifts available to all levels of the theatre.

Bar: The bar opens an hour and a half before the show. You can carry your drinks into the theatre as long as it is in a plastic cup, which can be obtained from the bar.

Cloakroom: The cloakroom opens an hour before the show. Please note that you cannot leave rucksacks, suitcases, and large bags there.

Toilets: Toilets (both Male and Female) are available on all levels of the theatre, with accessible stalls in each.

WiFi: There is free WiFi available for customers to use.

1. Christopher’s: One of London's best American restaurants, Christopher's makes you feel like a star with its glamorous setup, and is perfect for a pre-show meal, and some post-show drinks.

2. Bill's London: With vegetarian and vegan options, Bill's is an absolute favourite for those visiting West End. With some seriously delicious options, this one's perfect for a quick bite before your show.

3. Indigo at One Aldwych: Indigo is a stone's throw away from West End. Enjoy some grub (gluten-free and dairy-free options available) at this casual Covent Garden restaurant.

4. Eneko at One Aldwych: This Basque restaurant is a must-visit! With scrumptious food, fine wine, and friendly staff, Eneko is the perfect place for a pre-show meal.