A Local’s Handbook To The Holy Site Of Cordoba Mosque

Located in the heart of Andalusia, stands the millennia-old Cordoba Mosque. Also known as the Great Mosque of Cordoba, this grandiose structure was opened to the public in 987 AD. It remains one of the oldest and the most sacred places of worship in Spain. Positioned only two hours from Madrid and Granada, this Mosque–Cathedral in Cordoba is an ancient realm locked in the modern world that you must not miss in Spain. Here's everything you need to know before planning a trip to Cordoba's crown jewel. 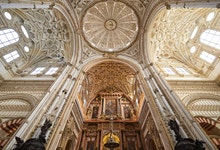 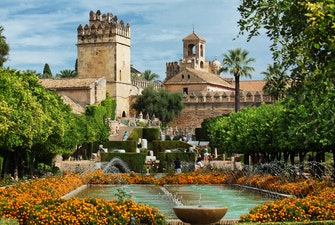 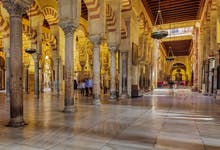 The Hypostyle Hall
The Mihrab
The Courtyard
The Dome

What’s in a name?

Cordoba Mosque is known by many names for different visitors. It is a mosque, cathedral and temple. Let us explain.

In the present-day area once stood a church of Saint Vincent of Saragossa. After the Umayyad conquest of Hispania, the site was divided as a place of worship for Muslims and Christians. Hence the names, Cordoba Mosque, the Great Mosque of Cordoba, Mezquita Cordoba, and Cathedral of Our Lady of the Assumption.

There is also a claim that the Mosque-Cathedral was once a Roman temple dedicated to Janus.

The Great Mosque Of Cordoba - Architecture

Out of Cordoba’s 3000 mosques, the most iconic is the Mezquita Cordoba for its size and time-honoured al-Andalus architecture. The magnificent Mezquita of Cordoba is most notable for its boundless interior that looks like it holds countless pillars. There are 856 columns to be precise and are made of jasper, marble and granite. The entrance directly leads you to the vast courtyard. You could picture how lavishly the Moorish Kings lived as you walk through the courtyard with fountains, an ornamental pond, a canopy of trees and a beautiful walkway. The Mosque was once lit by more than ten thousand gold, silver and bronze lamps, suspended from the ceiling. Only visiting the Mezquita Cordoba could make your dreams of living in Aladdin’s tale come true.

Taking a tour to explore the World Heritage site of UNESCO will allow you to see and learn why this is such an important site. Also, get to see the best of Cordoba - the Jewish Quarter, and Alcazar of the Christian Monarchs.

A Day Trip To Cordoba Mosque

A Cordoba Mosque Day Trip from Granada lets you see two sides of the same coin.

Granada is an ancient province in Spain located in the foothills of the Sierra Nevada mountains. Combining a visit to Granada and then to 2 hours travel from Granada to Cordoba Mosque would be an amazing opportunity to see Spain anew. Discover the charm in the streets on a walking tour of the Jewish Quarter with a local guide who will spill tea about the secrets of the city. The tour gives you enough time to explore the top attractions of the city and la Mezquita. It also leaves ample time to go shopping around old and new town.

Things to see at Cordoba Mosque

Highlights of the Great Mosque of Cordoba

These are the notable things you must spend a little longer at and here are a few reasons why they are so important.

The Hypostyle hall is what you will notice and remember the most from your visit. The vast hall once served as a central prayer hall. The sea of columns leads to the Mihrab. Its high timber ceilings are held up by double arches with intricate patterns.

The Mihrab which is used to identify the direction of prayer, is richly decorated. It is separated from the rest of the mosque with a screen of intersecting horseshoe and double arches. It was also the first time that a mihrab consisted of an actual room rather than the traditional wall.

Just above the mihrab, is the most flattering shell-shaped dome ever built. All that glitters here is gold. The mosaic and radial patterns of the pointed arches are lavishly decorated with gold. The monumental ribbed dome has three screens of interlacing arches beneath it, which appears like a dome within a dome.

This style of arches were only common among Visigoths. The use of the Horseshoe Arch at Cordoba Mosque since then created a traditional use of the style in architecture that spread across North Africa from Morocco to Egypt.

Save S$10 on your first booking with Headout when you use promo code: GOSNG

Visiting The Great Mosque Of Cordoba

By Bus
• Bus numbers 3 or 12 lead to the Cordoba Mosque. The nearest stop is Puerta Del Puente which is only 2 minutes walk to the Mosque.

By Train
• The nearest train station is Córdoba. The station is 2 km from the Mosque.

The best time to visit the Mosque is during the morning hours so you can enjoy the courtyard and the mosque’s natural beauty in daylight. Spring (March to May) is the best season to visit Cordoba since the weather is pleasant with minimal sun and rain.

Cordoba Mosque Facts That Will Amuse You

Instead of doing the normal plunder and destroy thing that conquerors usually did, the victorious Christians did something very different and unusual. Rather than demolish the existing mosque, they built a whole new cathedral inside it. It was difficult to know what to expect. I couldn't really imagine what it would look like. In the end, it was unlike anything I’d seen before.

This is my third time visiting the Mosque. This time I did not take a guide as I wanted to soak up the atmosphere. The old marvel of roman pillars and The old marvel roman pillars and the ceilings. Magic oozes from every corner. There are lots of seats to rest around. Its very cool outside as it was extremely hot outside. This place is a must in Andalusia.

Things to see near Cordoba Mosque

The Roman Bridge of Córdoba is a historic sight at Cordoba since it was originally built in the 1st century. Most of what you get to see in the present were Moorish construction in the 8th century. The bridge is constructed over river Guadalquivir and provides splendid photo ops.

This huge 17th-century rectangular square is covered by four-storied buildings. It is known for hosting traditional public spectacles such as bullfights. The square also is home to the luscious local cafes and restaurants.

Córdoba Synagogue is the historic building of the city. It was built in 1315. Since it was a small Synagogue it is suspected to have been owned by a wealthy man. The building consists of a courtyard, a prayer hall, an entrance hall and a women’s section. Check out the Córdoba Mosque and the Jewish Quater tour to learn more about the site.

4Alcazar of the Christian Monarchs

Also known as Alcazar of Cordoba, Alcazar of the Christian Monarchs is a medieval Moorish palace. The palace has a magnificent exterior with gardens and courtyards inspired by Mudéjar. It was declared as a cultural Heritage in the year 1931, and as a World Heritage Site by UNESCO in 1994. Check out the Skip the Line Guided Tour of Cordoba Mosque and Alcazar to see the fascinating palace.

Discover a colourful bonanza of pots and plants as you retreat into the alleyways for a tour of the gorgeous Patios of Cordoba. Similar to those patios of Roman times, Cordoba has followed the tradition of an oasis full of bright flowers, tropical plants, elegant water features, and eclectic decoration. The Fiesta de los Patios festival is conducted every year during the first week of May by Cordobes to celebrates the art of elaborately decorating courtyards. Checkout the Guided Tour Authentic Patios of Cordoba to catch a glimpse.

What is the Great Mosque at Cordoba famous for?

The Great Mosque at Cordoba is famous for its Moorish Architecture which later influenced Muslim architecture all over the world.

What distinguishes the Great Mosque of Córdoba?

The Great Mosque of Córdoba is distinguished for its unique style of architecture which is considered to be revolutionary.

What is the Mosque of Cordoba now?

The Mosque of Cordoba is now used as a Cathedral.

What is the Mosque of Cordoba made of?

The Mosque of Cordoba is made of jasper, onyx, marble and granite.

Yes. Cordoba Mosque is open to visitors. You can purchase Mezquita Cordoba Tickets to visit the mosque.

How many columns are in Cordoba Mosque?

There are 856 columns in Cordoba Mosque.

What is the style of arch found at the Great Mosque at Cordoba?

The horseshoe-style arches are found in the Great Mosque at Cordoba.

How much does it cost to visit Mezquita (Mosque-Cathedral of Córdoba) 2021?

The starting Mezquita Cordoba Tickets price is €11 for adults.

Should I book Mezquita (Mosque-Cathedral of Córdoba) tickets in advance?

It is recommended to book your Mezquita Cordoba Tickets in advance since it is the main attraction in the city and the waiting time gets longer than expected.

When was the Great Mosque of Cordoba built?

The Great Mosque of Cordoba was built during 8th century.

Where can I purchase Cordoba Mosque Tickets?

It is recommended to book your Cordoba Mosque Tickets in advance since it is the main attraction in the city and the waiting time gets longer than expected.

Is the Cordoba Mosque in Spain?

Yes, Cordoba Mosque is located in Cordoba, in the Andalusia region of Spain. It is only 3 hours from Madrid.