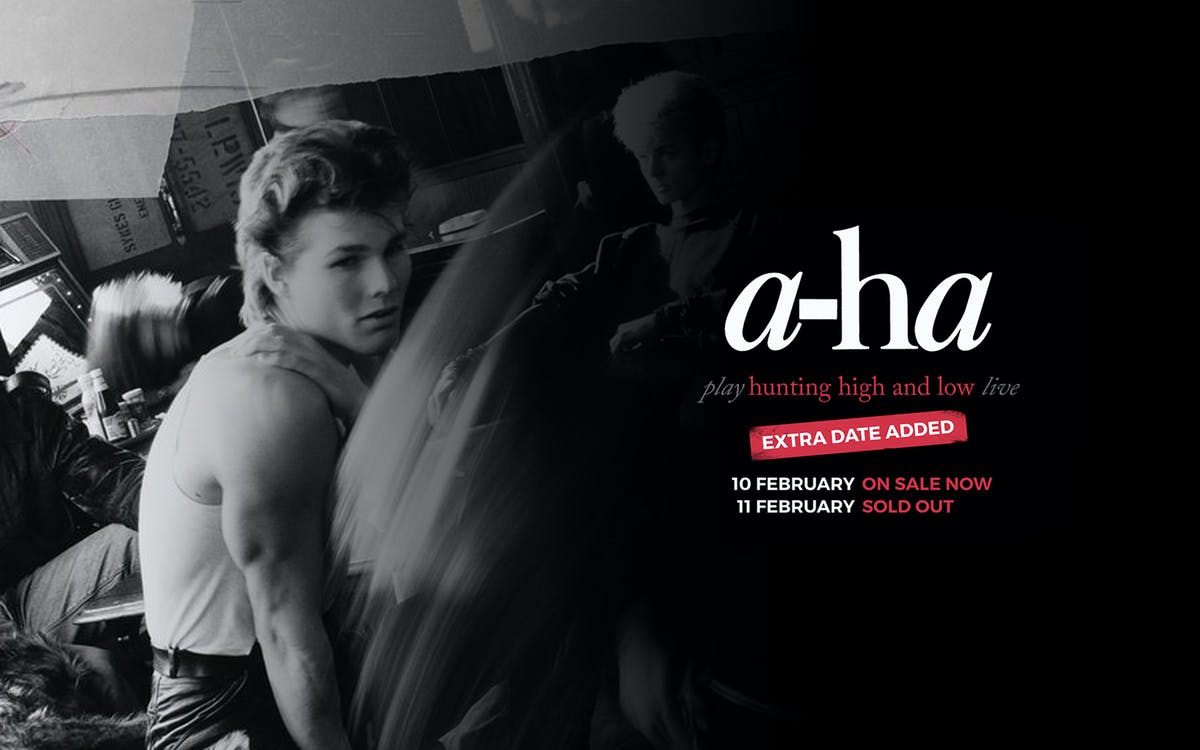 Take on the hit Norwegian pop sensation a-ha, who are celebrating the 35th anniversary of their groundbreaking debut album, Hunting High and Low. Enjoy a hair-raising performance of their greatest hits at the Dubai Opera!

Oslo-based pop and rock band a-ha came to the world’s attention in 1985 with the release of their debut album, Hunting High and Low. The album peaked at number 1 in Norway, number 2 in the UK, and number 15 on the US Billboard; and it also yielded two international number-one singles: “Take on Me” & “The Sun Always Shines on TV”. Following this spectacular debut, the band has stayed on as a mainstay in the pop music scene, releasing 10 studio albums, many hit singles, several compilations and four live albums. The band has also been listed in the Guinness book of World Records for having the biggest-paying rock concert attendance, during their performance in the Rock in Rio festival. To this day, the band remains the most successful pop act to have emerged from Norway.

Celebrating the 35th anniversary of their groundbreaking debut album, Hunting High and Low, a-ha will perform at the Dubai Opera, playing all their greatest hits and underappreciated classics for your listening pleasure. Join in singing along as Morten Harket takes the stage with his wonderful crooning voice, and experience the legacy of the band whose songs remain just as evergreen even after 30 or more years since their release.

Rules and Regulations
Latecomers will be allowed inside the hall only during a break.
The door of the auditorium will be closed 5 minutes before the show commences.
The use of any camera recording devices is strictly prohibited inside the hall.
Bars open 2 hours before the show begins.
All Boxes are General Admission, with seating on a first-come, first-served basis. Seats cannot be reserved before arrival.

Your mobile tickets will be sent to your email shortly. Please show the mobile voucher at the Theatre's Box Office along with a valid photo ID to enter the Opera Theatre.

By Metro: Get off at Burj Khalifa station on the red line. Take the walkway from Sheikh Mohammed Bin Rashid Boulevard to Dubai Opera. Please note that walking time is approximately 25 minutes.

Validity
This performance is valid for the date selected at the time of booking.

Missing any information?
Yes
No
This experience is unavailable
You'll be the first to know when these tickets are back online.
notify me
Awesome!We will notify you.
Why Headout?
Trusted platform used by 100K+ people, each month
Get the lowest prices and last minute availability
Discover and connect with 10,000+ experiences
Browse verified reviews and professional photographs
Have a question? Live chat with our experts 24/7
The world on your tap!Get the Headout app to get tickets on your phone and access app-only deals. Talk about win-win.
We've served 15 million+ guests and we are here for you
15 million +Happy customers across 10,000+ experiences
4.4/55,000+ verified reviews with 90% excellent score
In the MediaFeatured and recommended by the best brands
24 x 7 Help CenterHave a question? Live chat with local experts anywhere, anytime
Headout is building the future of how we experience our cities.
Made with ❤️ all over the 🌎
Headout Inc.
82 Nassau St #60351 New York, NY 10038
Cities
New YorkLas VegasRomeParisLondonDubaiBarcelona+63 more
Headout
About UsHelpCareersTravel BlogCompany BlogCreator Partnerships
Partners
Join HeadoutSupply Partner HubAffiliates
© Headout Inc
Privacy PolicyTerms of Usage