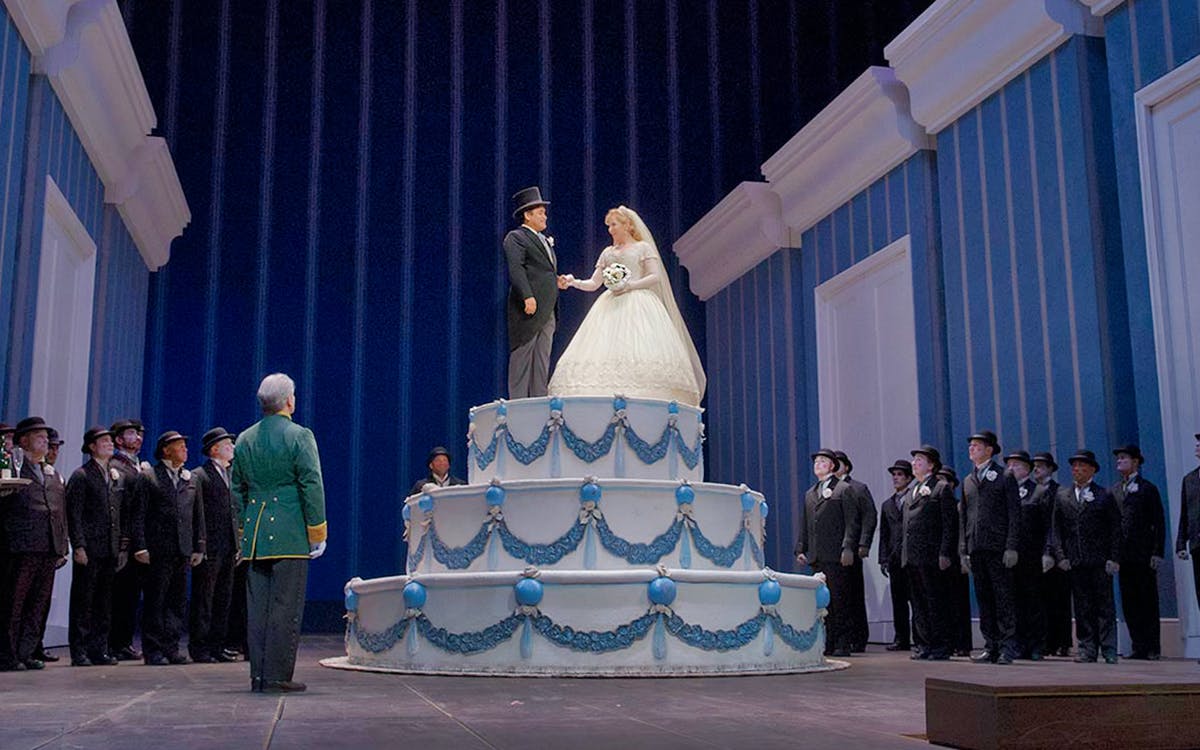 Relish legendary Italian composer Gioachino Rossini’s effervescent take on Cinderella. Savour incredible vocals and unforgettable music, as the star-studded cast is all set to take your breath away!

Considered to be the world’s foremost composer in the 19th century, Gioachino Rossini created 39 works, many of which continue to be played today. His innovation in melody, harmony, and the instrumental colour was unmatched, propelling him to the top of the opera community.

La Cenerentola is Rossini’s take on the story of Cinderella and is set in the seaside town of Salerno, with the prince of Salerno (rather than some generic Prince Charming) rescuing the Cenerentola from her family. What separates La Cenerentola from other operas is the incredible use of pyrotechnics in conjunction with overwhelming vocals serves a profound dramatic effect. The use of comedy can also be seen throughout the opera, something that is a hallmark style of Rossini. It is also considered to be one of the finest writing works of Rossini for the solo voice and ensembles.

Up and rising mezzo-soprano Tara Erraught takes on the title role and is joined by the tenor sensation Javier Camarena as the Prince of Salerno. Erraught won critical acclaim when she took on the role of Romeo in I Capuleti e i Montecchi in 2011 on just 5 days notice, and she has continued to grow at an incredible pace. Camarena’s performance as the prince in 2014 won him praises for his accuracy and ability to capture both the highs and lows exactly as Rossini intended. Cesare Lieve’s production is intelligent and sensitive. He captures the heroine’s underlying sadness spectacularly well, while still highlighting the cruelty of the two sisters and the father. All in all, the poignant and forgiving opera is a must-see at the Metropolitan!

Angelica, who is called Cenerentola, is the stepsister of Clorinda and Tisbe, daughters of Don Magnifico. Cenerentola serves as the family maid, and she is singing the song about a king who marries a commoner. It is announced that the prince, Don Ramiro is in search of a bride and that he is looking for the most beautiful girl in the land. Magnifico hopes that it is Clorinda or Tsibe since he is dire need of saving the family fortune.

Don Ramiro disguises himself as a servant so that he can observe his brides freely. He meets Cenerentola, and the two immediately take a liking to each other. Ramiro’s valet, Dandini, arrives masquerading as the prince, and the two sisters try their best to flatter him. They are invited to the ball, but Cenerentola is left behind after Magnifico refuses to let her attend the ball.

Will luck favour Cenerentola finally, after years of mistreatment and misfortune? Will the prince see through the fabricated personalities of the two sisters and marry the kindhearted Cenerentola?

Duration
3 hours and 16 minutes, including one intermission

Seating
The MET Opera has a seating capacity of 3,800.

Get off at 66 St - Lincoln Center Subway Station using lines 1 or 2. The Metropolitan Opera House is just a 5-minute walk from here.

Missing any information?
Yes
No
This experience is unavailable
You'll be the first to know when these tickets are back online.
notify me
Awesome!We will notify you.
Why Headout?
Trusted platform used by 100K+ people, each month
Get the lowest prices and last minute availability
Discover and connect with 10,000+ experiences
Browse verified reviews and professional photographs
Have a question? Live chat with our experts 24/7
Other experiences similar to La Cenerentola
Musicals
The Lion King
Instant Confirmation
4.5
(1.1K)
from $86.50
Musicals
Aladdin
Instant Confirmation
4.5
(2.4K)
from $69
Musicals
Phantom of the Opera
Instant Confirmation
4.5
(2.8K)
$86
Musicals
Dear Evan Hansen
Instant Confirmation
4.5
(1.2K)
from $103.10
Free Cancellation
City Passes
New York Explorer Pass - Pick Your Attraction
4.5
(2K)
$69
The world on your tap!Get the Headout app to get tickets on your phone and access app-only deals. Talk about win-win.
We've served 15 million+ guests and we are here for you
15 million +Happy customers across 10,000+ experiences
4.4/55,000+ verified reviews with 90% excellent score
In the MediaFeatured and recommended by the best brands
24 x 7 Help CenterHave a question? Live chat with local experts anywhere, anytime
Headout is building the future of how we experience our cities.
Made with ❤️ all over the 🌎
Headout Inc.
82 Nassau St #60351 New York, NY 10038
Cities
New YorkLas VegasRomeParisLondonDubaiBarcelona+74 more
Headout
About UsHelpCareersTravel BlogCompany BlogCreator Partnerships
Partners
Join HeadoutSupply Partner HubAffiliates
© Headout Inc
Privacy PolicyTerms of Usage